After the COP House was destroyed by arson on June 1, 2020 during protests and riots surrounding the death of George Floyd, the reopening of the house was celebrated Wednesday afternoon with a brief program, open-house tours and refreshments.

The Villa Street COP House, located at 1146 Villa St., is one of six COP Houses in the city. In 1996, the Racine Police Department embraced the idea of community policing, which aims to stabilize neighborhoods by forging relationships with community members, improving the quality of life, reducing crime and empowering citizens to take back neighborhoods, according to the city’s website.

The Villa Street COP House was named for Thelma Orr, a longtime community activist who died of cancer in 1999 at the age of 68.

Four people were charged last year for the damage to the house. Justin C. Hernandez of Kenosha and Kylie B. Gelmi of Mount Pleasant were charged with arson and burglary. Gelmi also was charged with felony bail jumping; she was on bond for a previous robbery charge.

Anthony McNeil and Jason Young, both of Racine, were charged with arson and burglary as a party to a crime. McNeil was also charged with interference with firefighting.

“From serving as places to gather, have access to internet or computers, receive help with your homework, apply for a job, or to speak with your neighborhood officer for advice, these COP Houses continue to be an important part of our community,” Racine Police Sgt. Chad Melby said during the program portion of the reopening celebration. “Dr. Thelma Orr dedicated her life to the community through education and the advancement of civil rights. Racine Police Department continues to use Dr. Thelma Orr’s teachings and principals to guide us towards our goal of a more fair and prosperous community.”

Robinson, who was sworn in last spring, said one of the primary reasons that he applied for his job was because of the COP philosophy.

“I firmly believe that this kind of outreach allows policing to be delivered in a fair and impartial way,” Robinson said.

Mason said he remembers walking through the site with Howell on “a pretty dark day just over a year ago.”

He said rebuilding the home was an important recommitment of the Racine Police Department, the City of Racine and all the nonprofits that make the COP Houses work.

“We are part of this community. We are part of the fabric of this neighborhood,” Mason said. “We know how important community-oriented policing is, what a difference it makes in people’s lives.”

Racine Sgt. James Pettis of the Community Oriented Policing Unit spoke about endurance. He pointed out that the address sign on the front of the COP House is tarnished due to the fire.

“I hope that stays, because I think that’s going to be a lasting example of the endurance not only of this space in this place, but of this philosophy and values our community,” Pettis said.

“I remember the day after this place was set on fire … seeing that that reached a positive resolution not only for our department and the value that it held with us, each of us standing over here today, but also for the members of this neighborhood, for Miss Jones and her family.”

For additional photos and video from the reopening ceremony, find this story at JournalTimes.com. 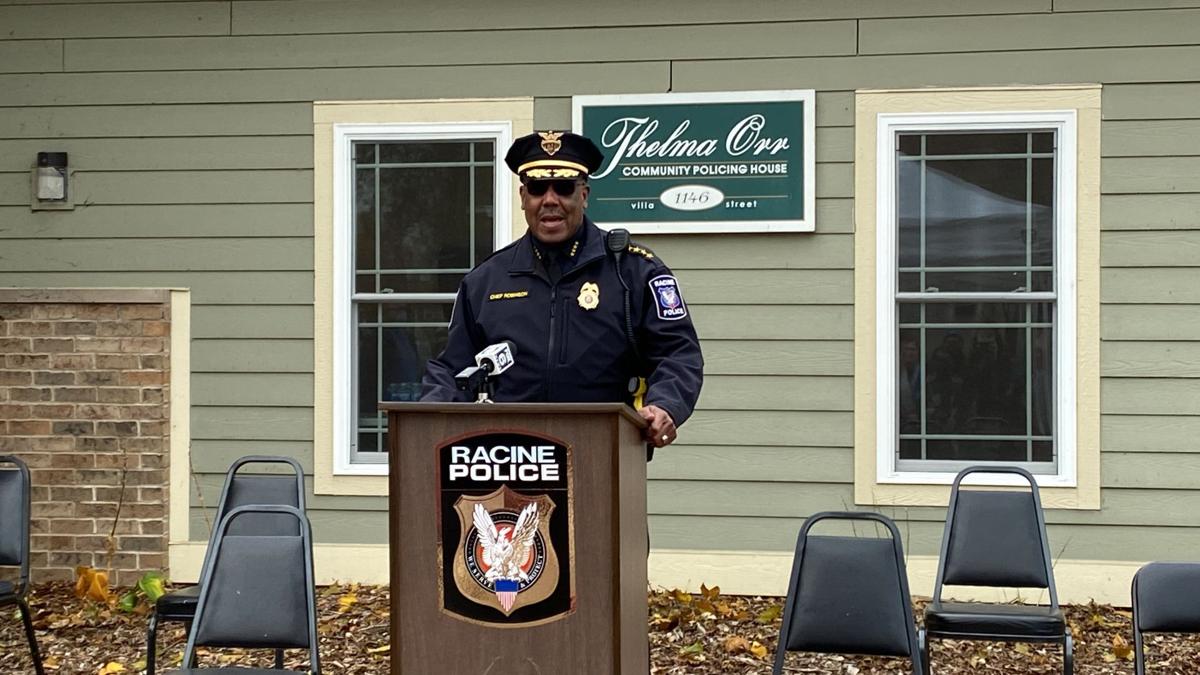 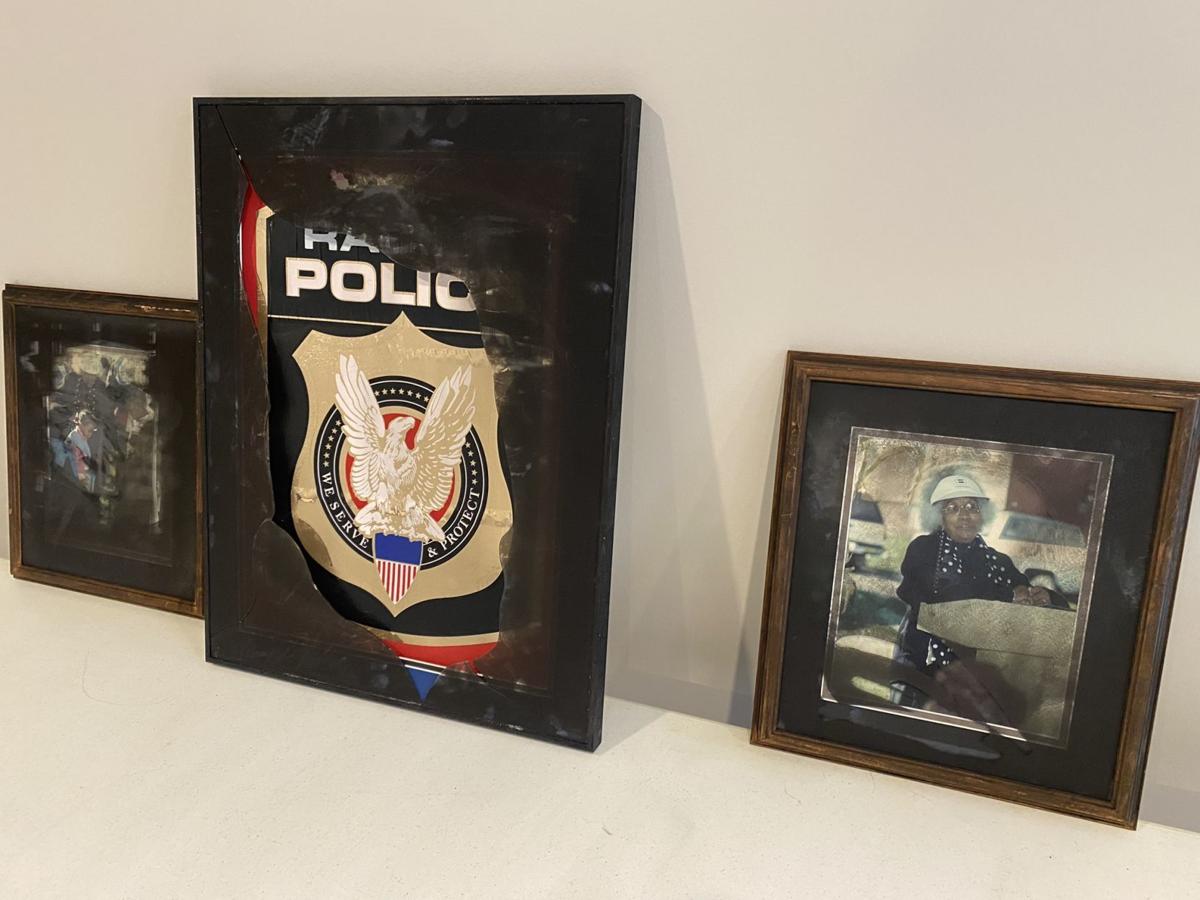 A Racine Police Department insignia with a broken picture frame joins ashed-over photos of Thelma Orr on display at the newly reopened Thelma Orr Community Oriented Policing House located at 1146 Villa St. Orr was a longtime community activist who died in 1999. The COP House named after her was destroyed by arson in June 2020. 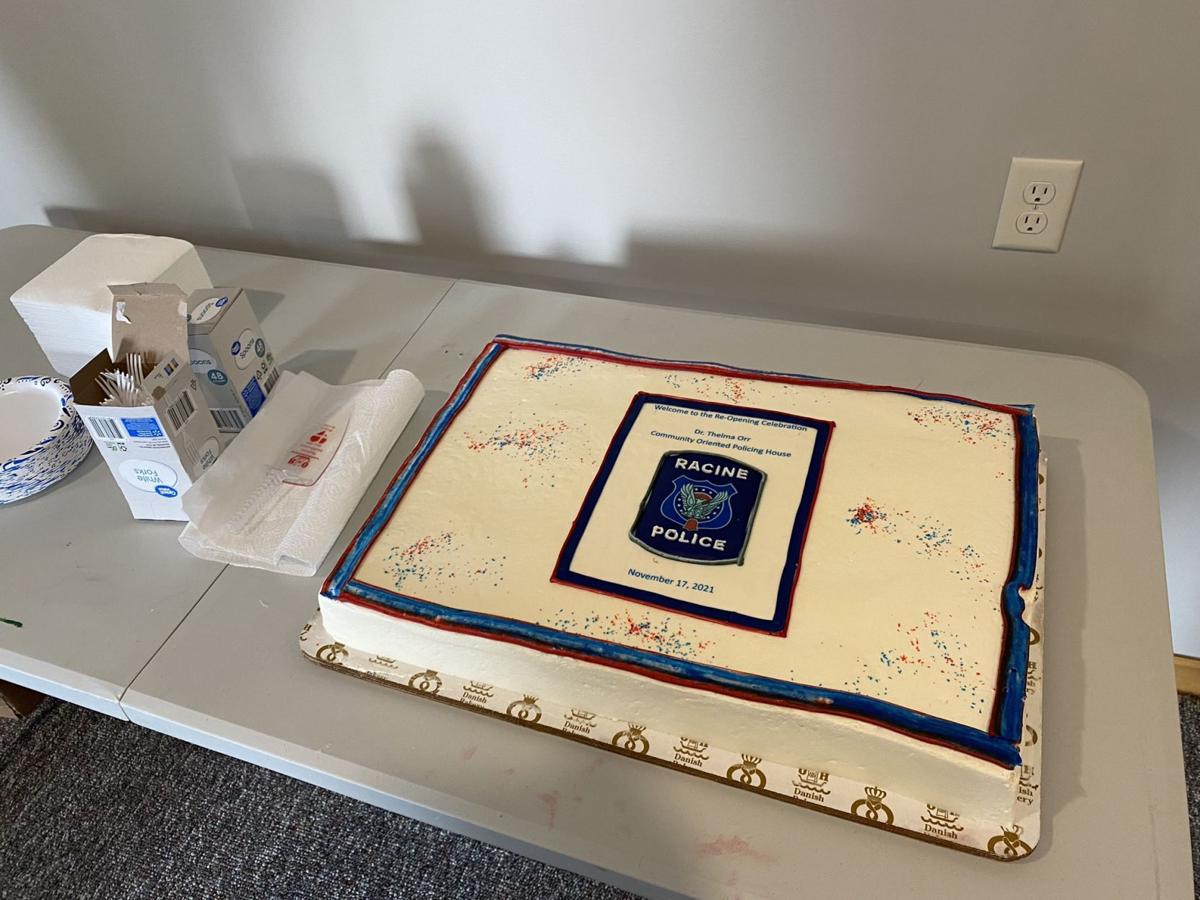 The re-opening of the Thelma Orr Community Oriented Policing House was celebrated Wednesday afternoon with a brief program, open house tours and refreshments, such as this cake decorated with the Racine Police Department logo. 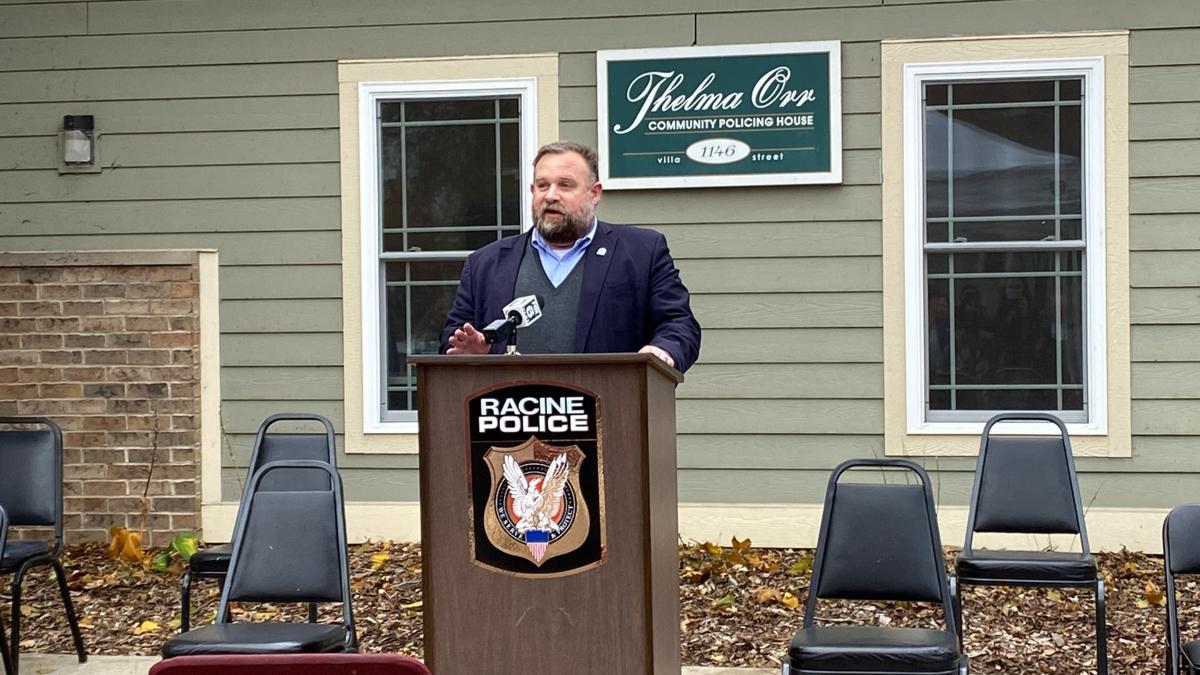 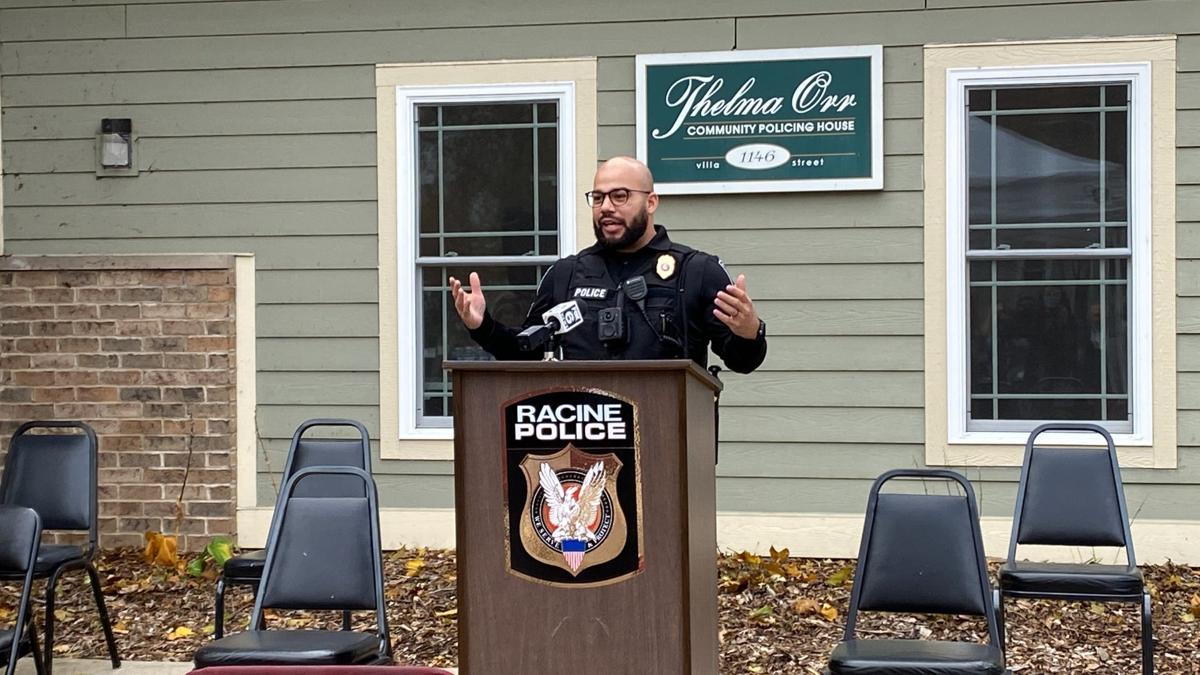 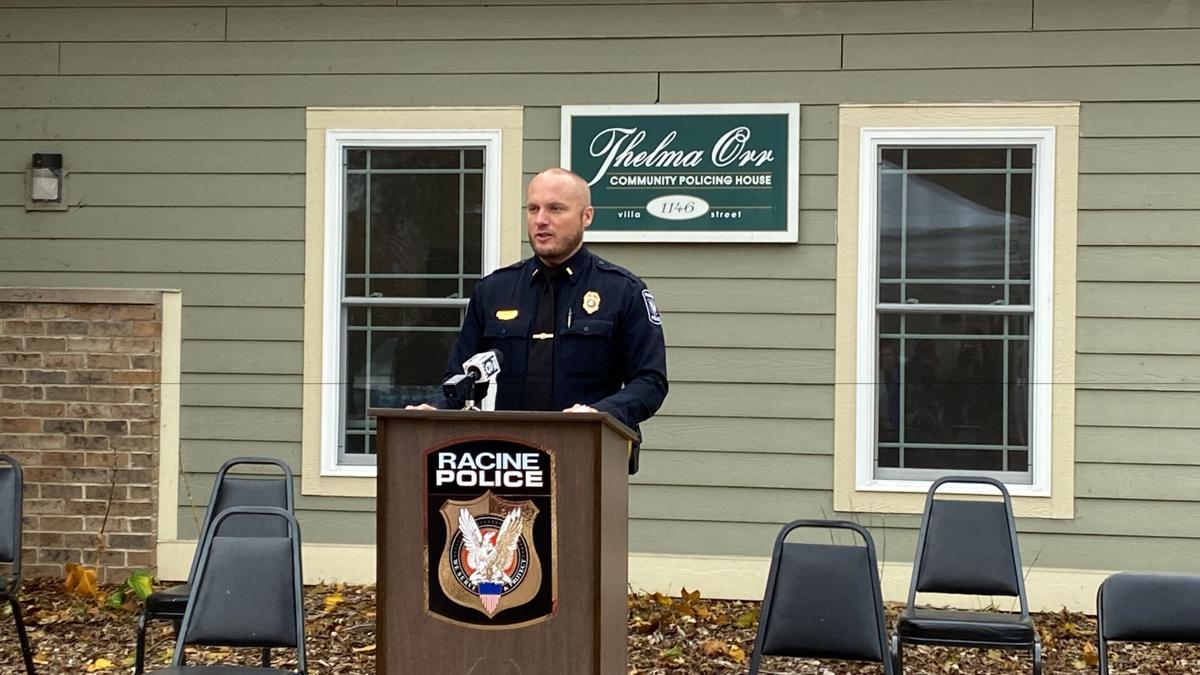 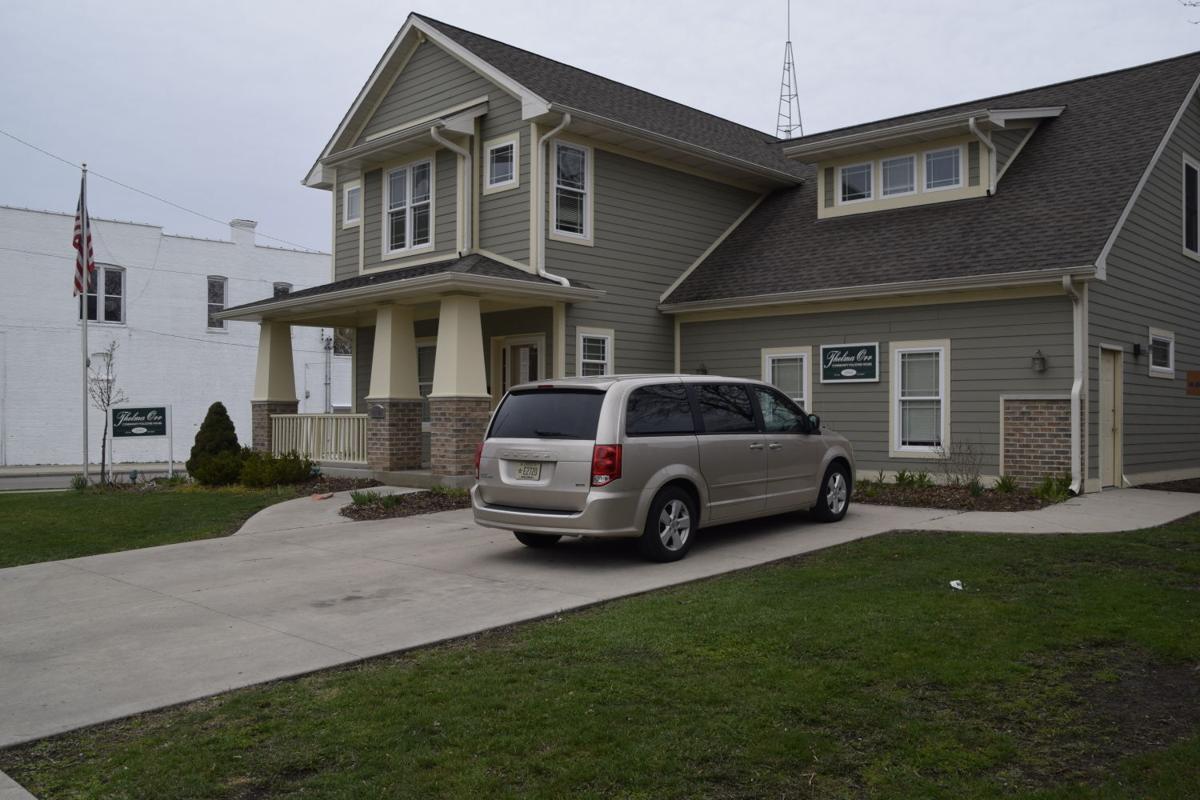