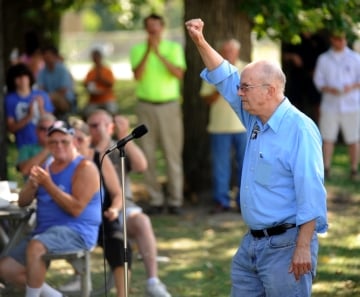 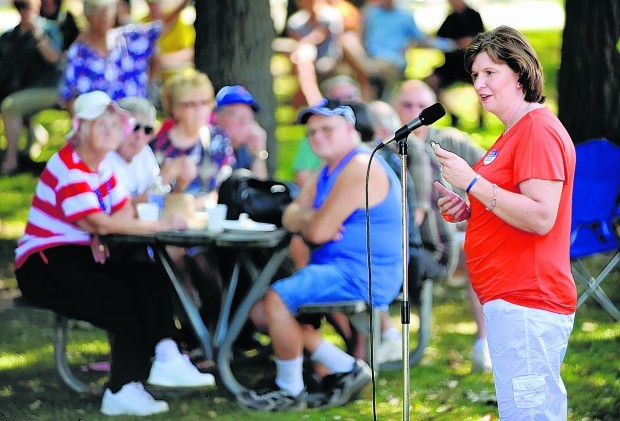 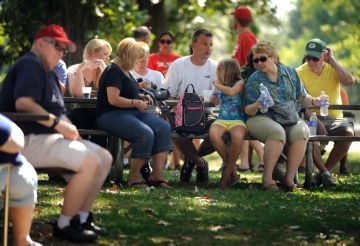 Families enjoy an afternoon picnic under a canopy of trees during LaborFest held on Monday, September 3, 2012 at Caledonia-Mount Pleasant Memorial Park. / Scott Anderson scott.anderson@journaltimes.com Buy this Photo at jtreprints.com

CALEDONIA — The last two years haven’t exactly been the best for Wisconsin labor.

In 2011, the state Legislature passed Act 10, which effectively eliminated collective bargaining for all public employees except law enforcement officers and firefighters. Then in June, efforts to recall Republican Gov. Scott Walker, who pushed for the legislation, failed.

Those setbacks may have hit the movement hard, but area unions say the events — coupled with the Democrats regaining control of the state Senate — have only bolstered them.

Gathered for LaborFest on Monday at Caledonia-Mount Pleasant Memorial Park, near the intersection of highways K and H, they and local Democratic state lawmakers called on picnickers, activists and rank and file union members to double their efforts to take Wisconsin back and fight for workers’ rights.

“I am very proud to be one of the 14 Democratic senators that went to Illinois to fight against this governor,” said state Sen. Robert Wirch, D-Pleasant Prairie. “We fought back then ... but the struggle goes on. We have got to keep on fighting.”

Importance of the vote

Wirch went on to emphasize the importance of the November election, calling it a battle between “extremists and moderates.”

Other lawmakers, among them Assembly Minority Leader Rep. Peter Barca, D-Kenosha, state Sen. John Lehman, D-Racine, and state Rep. Cory Mason, D-Racine, had similar things to say, as did Democratic candidates for the state House. Racine resident Melissa Lemke, who is running against Caledonia Republican Tom Weatherston for the 62nd Assembly District, spoke, and so did Kelley Albrecht of Burlington, who is running against Republican State Rep. Robin Vos for the 63rd Assembly District.

“The story of labor has always been about struggle,” Mason said.

Award recipients — such as retiring state Rep. Robert Turner, D-Racine, who received the Retired Labor Person of the Year award — also took the microphone. They were equally — if not more — passionate about the need for more people to get involved in the struggle.

“This just means I have to work harder,” the 64-year-old certified nursing assistant, who has worked at Lincoln Lutheran, said of the honor.

“We don’t need to have collective bargaining to have a union; all we need is ourselves,” said Horlick High School social studies teacher, Al Levie. He and his wife, Racine Education Association teachers’ union president Jennifer Levie, received the year’s Mr. and Mrs. Solidarity award.

“If we understand our power, they will give us collective bargaining,” he said “We have to be strong. We have to be united. And we have to move forward.”

Racine man accused of assaulting and kidnapping a woman

The suspect was given a $100,000 cash bond in Racine County Circuit Court on Tuesday.

In 2023, Mount Pleasant's Campus Park is going to look quite a bit different than it did five years ago.

One of the operators said the Lake Andrea Beer Garden will be “more hip and trendy” than the Petrifying Springs Park Biergarten, which has a more traditional German style.

A medical company, which has provided health care services for inmates in incarceration facilities throughout the Midwest including the Racine County Jail, has filed for bankruptcy as it faces multiple wrongful death lawsuits. The filing could slow down — but won't stop — a $20 million lawsuit over the June 1, 2021, death of Malcolm James in the Racine County Jail.

DR Congo says more than 270 killed in massacre by rebels

DR Congo says more than 270 killed in massacre by rebels

Families enjoy an afternoon picnic under a canopy of trees during LaborFest held on Monday, September 3, 2012 at Caledonia-Mount Pleasant Memorial Park. / Scott Anderson scott.anderson@journaltimes.com Buy this Photo at jtreprints.com