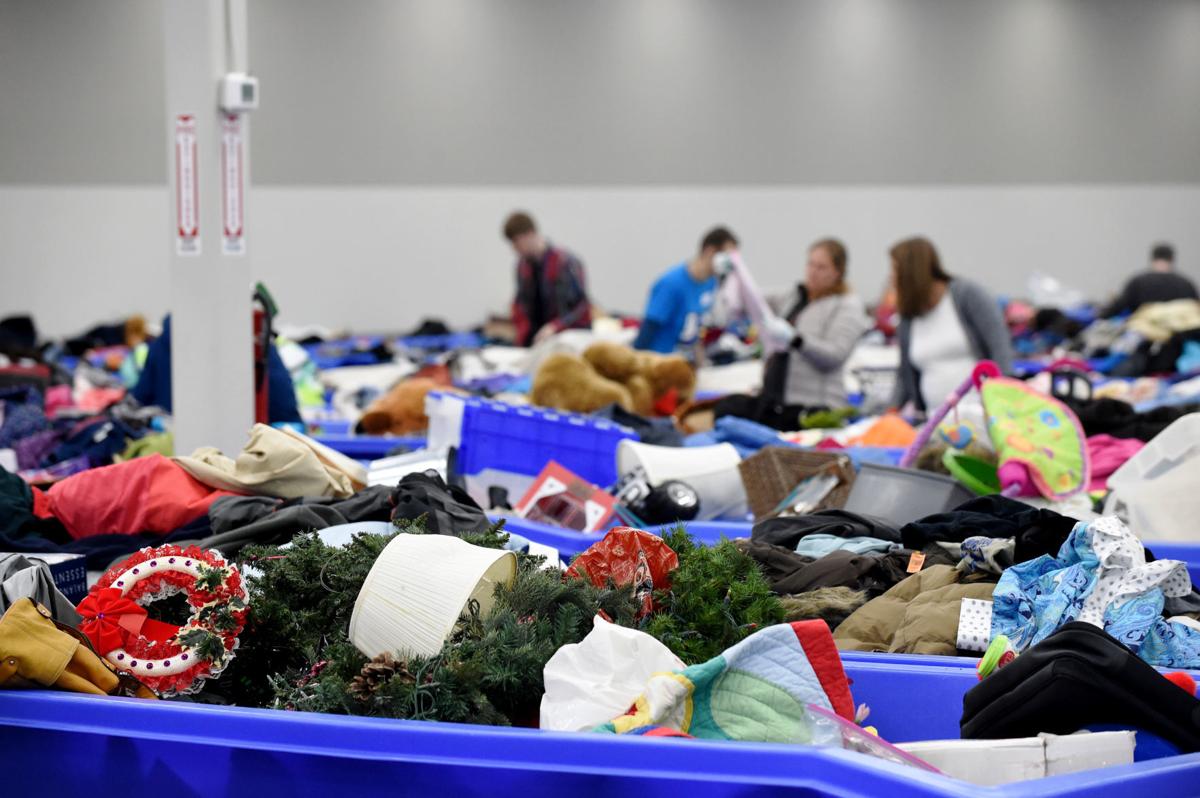 Dozens of rows of blue tubs on wheels are filled with odds and ends, each perused daily by resellers looking to flip their purchases for a profit, are shown at Goodwill's outlet store in Sturtevant. 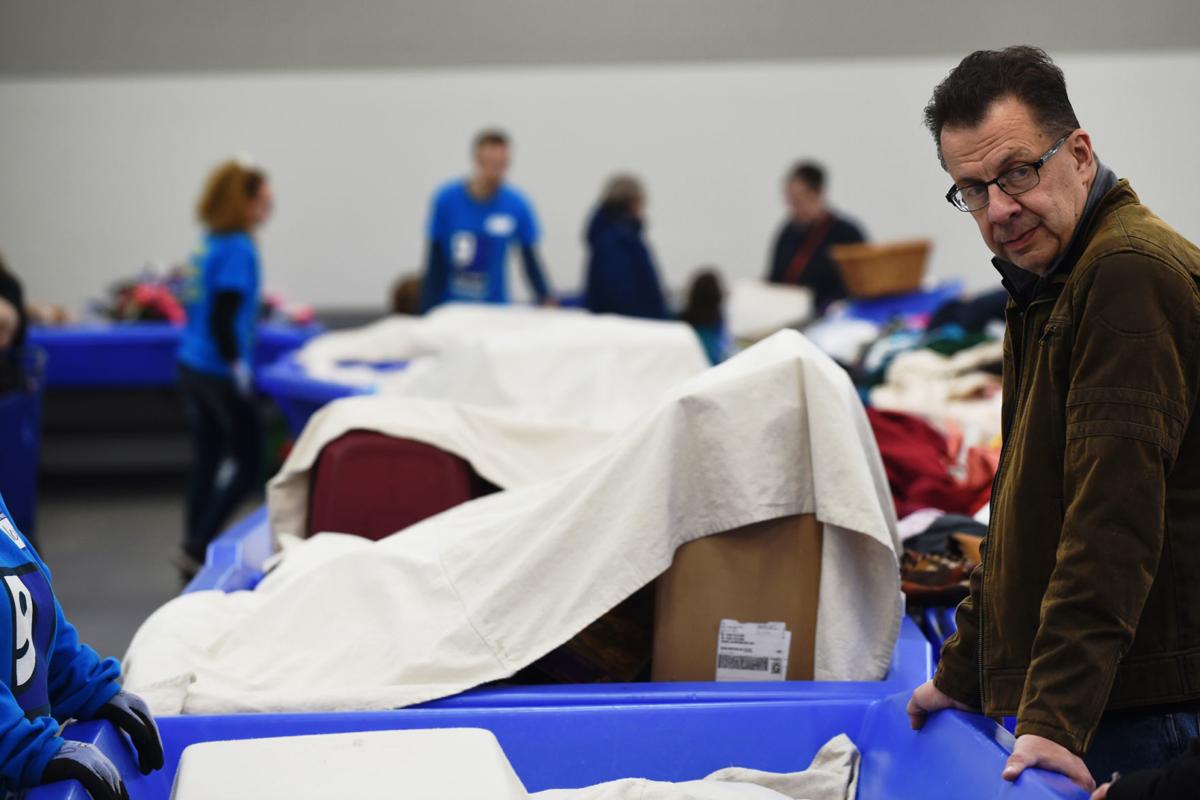 Ron Edquist stands waiting for sheets to be pulled off of blue rolling bins full of unsold items at Goodwill's outlet store in Sturtevant. As a reseller, Edquist hopes to flip his finds for a profit online. 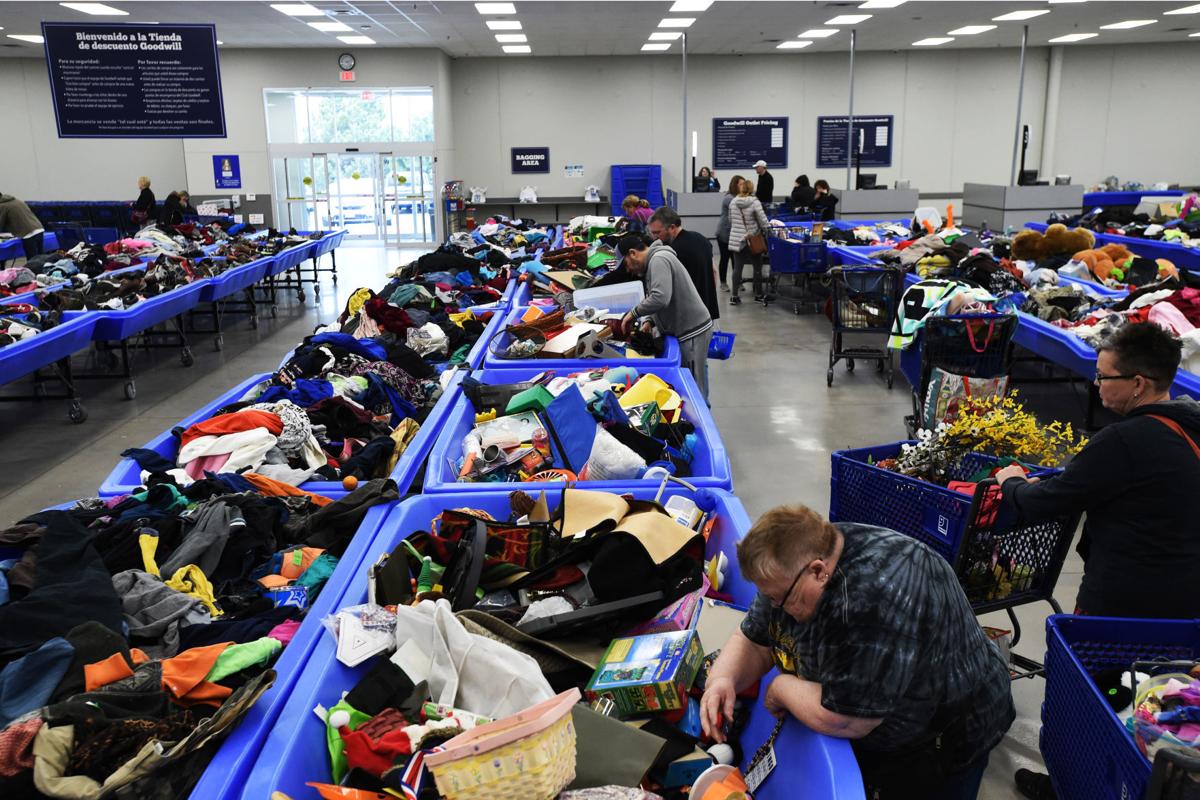 Shoppers at Goodwill Industries' outlet store in Sturtevant find extra deals in rows upon rows of assorted bins. Resellers can make a living by picking from these bins known as "Gaylords."

These self-employed online entrepreneurs make a living by selling “junk” on the internet.

But rather than selling brand-new products right off of assembly lines or out of artisans’ hands, resellers focus on used or discarded products that still hold value, if you know where to look.

It’s easy to equate these guys to alchemists. They prowl garage sales, flea markets, online auctions and second-hand stores, sifting through bric-a-brac in search of something that could be sold like gold.

Durfee, who lives in Connecticut, has been doing reselling full-time for three years.

He isn’t swimming in cash, but makes a good living. He said his yearly revenue averages around $100,000, but only about a third of that is profit — most of his costs are simply buying the stuff he resells, in addition to storage and shipping fees.

The income isn’t consistent, however.

“I could be riding high in December right before Christmas. But right now, in April, times are not so great,” he said.

Being a reseller would be nearly impossible without the internet. Durfee, like most people in his field, sell exclusively through Amazon and eBay.

A lot of resellers stumble into it by accident.

Ron Edquist, a 60-year-old retiree from Kenosha, always enjoyed thrifting. But as the junk he’s bought has piled up, he started selling a few months ago.

“It’s a little part-time business for me,” he said.

Chris Friday of Elkhart Lake had a CD collection he was trying to get rid of. He said “a lot of it was worth nothing,” but a few discs turned a profit. That income got him interested in what has now become his occupation.

He’s come to love it, particularly the freedom reselling provides.

Earlier this week, Friday skipped a sale and stayed home because of an unexpected April snowstorm. There’s no boss to force him to a schedule or any work emails that would pile up if he took a day off.

That’s something that appealed to Durfee too.

“I have some issues with authority,” Durfee laughed.

On Friday, both Edquist and Chris Friday were shopping at the Goodwill outlet, 1630 Enterprise Drive, in Sturtevant, the only one of its kind among 70 Goodwill stores in southeastern Wisconsin.

Everything for sale there has already spent three to fourth weeks on shelves at Goodwill retail stores, but nobody bought them. This is the next stop.

Whatever doesn’t sell here is goes to after-market vendors “for pennies on the dollar,” according to Ronald Tatum, Goodwill’s director of supply. A lot of unused textiles are recycled, for example, oftentimes going to developing countries or used as rags in factories. This keeps waste out of landfills, fulfilling one of Goodwill’s missions.

On the outlet’s sales floor, DVDs, CDs and video games are sold for just $1 — a fraction of the retail price, even for Goodwill — and clothes, electronics and glassware are sold by the pound for between $0.69 and $1.39.

“The outlet draws a different customer base than your ordinary Goodwill shopper,” Tatum said. “Seventy-five percent of our customers are resellers … they’re avid. This is what they do.”

The sales floor is comprised of large blue plastic tubs on wheels are filled with stuff, sometimes organized by category, sometimes assorted.

“When you come here, it’s like a treasure hunt,” Edquist said.

“The Turn” happens every half hour. That’s when new plastic tubs — called Gaylords — are rotated onto the sales floor. Right before that happens, the resellers meander toward where the fresh items will be unveiled. Once the cloth coverings on top of the Gaylords are pulled back by the Goodwill staff, the resellers immediately dig in, sifting through junk, searching for treasure.

When a tub of electronics is pulled out, Edquist carefully picked through a stack of DVDs looking for rare finds. The man across from him had a different tactic. He literally threw all the Blu-rays in the bin into his shopping cart. He’ll go through them later to see what’s worth putting online.

Electronic media sells fastest, according to Tatum, although shoes, books and toys can be hot commodities.

But outlets are far from the only place where resellers feed.

At an estate sale, Friday once picked up a voice recorder for less than a dollar. After doing some searches on the internet, he found that that specific type of recorder was sought after by ghost hunters and paranormal enthusiasts. It sold for $2,000.

He also bought a complete set of DVD teaching tools for $15. It flipped for $500.

“You get lucky sometimes,” he said.

One of Durfee’s recent purchases was access to an abandoned storage unit for $10. Inside was a box of ghost novels. He’s selling them on Ebay in packs of five for $20. Within a week, they’ve already generated $100 in revenue. In total, Durfee hopes to make $1,000 out of the $10 purchase.

Some of it might just be junk. But maybe the action figure is collectable, or the clock was a limited edition, or collectors will find those plastic cars valuable. He won’t really know what the stuff is worth until he plugs the names into Ebay or Google, to see what the going rate is.

“Sometimes you’ve got to take a gamble,” Friday said.

Durfee also dabbles in the world of “retail arbitrage.” That’s trade-speak for buying from traditional retail stores (usually at a clearance price) then reselling for profit. The cost will often be higher than normal purchases for resale, but if Durfee can find a hot item — like a fast-selling LEGO set or new game — then there’s money to be made.

It’s easier for consumers to buy something on Amazon than going to Target or Walmart, hoping something hasn’t sold out already. It’s a market resellers are able to cater to where brick-and-mortar stores can’t.

Thrift for one, thrift for all

The reselling community is pretty close-knit. Friday was trading items with another picker/reseller at Goodwill on Friday. And Durfee said that he’ll team up with other resellers to “go on a whole route of thrifting, garage sale-ing, yard sale-ing and tag sale-ing” for a weekend.

He calls them “masterminding sessions” where ideas and tactics are passed around freely.

Durfee’s Youtube channel, ThriftSchool, has 30,000 subscribers. On it, he documents his thrifting adventures and shares tips for the curious, allowing them a foothold into the trade.

Two of his videos have attracted more than 100,000 views, and even the less popular ones still get a few thousand every time, creating another revenue stream for the 25-year-old.

Friday said that he got started in reselling thanks to YouTubers like Durfee, who showed him the ropes.

“There’s a lot of newbies coming in who need help,” Durfee said, “and we’ll answer whatever questions they have.”

“The outlet draws a different customer base than your ordinary Goodwill shopper. Seventy-five percent of our customers are resellers … they’re avid. This is what they do.” Ron Tatum, Goodwill’s director of supply

“When you come here, it’s like a treasure hunt.” Reseller Ron Edquist

"When you come here, it's like a treasure hunt."

“The outlet draws a different customer base than your ordinary Goodwill shopper. Seventy-five percent of our customers are resellers … they’re avid. This is what they do.”

The finding is just one of many from the latest Marquette Law School Poll released Wednesday, which shows that Wisconsin voters otherwise largely support the major initiatives Evers proposed in his budget.

Getting to zero waste is Wednesday meeting topic

This couple started dating by going to gaming stores and testing each other's skills via tabletop games like Yu-Gi-Oh! and Pokemon. Now, they run their own shop right here in Racine.

WATERFORD — Down 15,000 checkouts from last year, the Waterford Public Library is getting rid of late fees. Kind of.

Dozens of rows of blue tubs on wheels are filled with odds and ends, each perused daily by resellers looking to flip their purchases for a profit, are shown at Goodwill's outlet store in Sturtevant.

Ron Edquist stands waiting for sheets to be pulled off of blue rolling bins full of unsold items at Goodwill's outlet store in Sturtevant. As a reseller, Edquist hopes to flip his finds for a profit online.

Shoppers at Goodwill Industries' outlet store in Sturtevant find extra deals in rows upon rows of assorted bins. Resellers can make a living by picking from these bins known as "Gaylords." 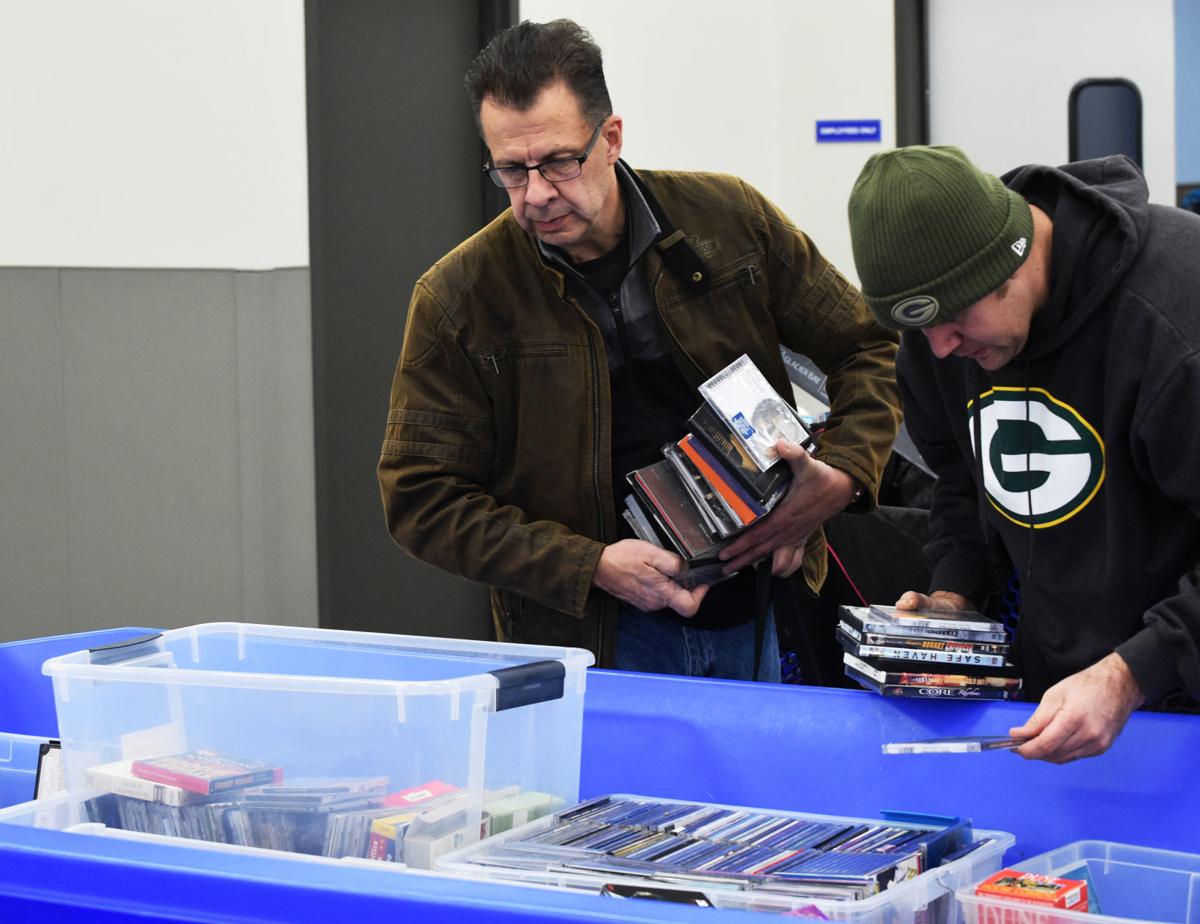 Ron Edquist, left, of Kenosha, peruses a bin full of DVDs, video games and Blu-ray Discs at the Goodwill outlet store in Sturtevant. Edquist is a part-time reseller, meaning he makes money "re-selling" products online that he purchased. 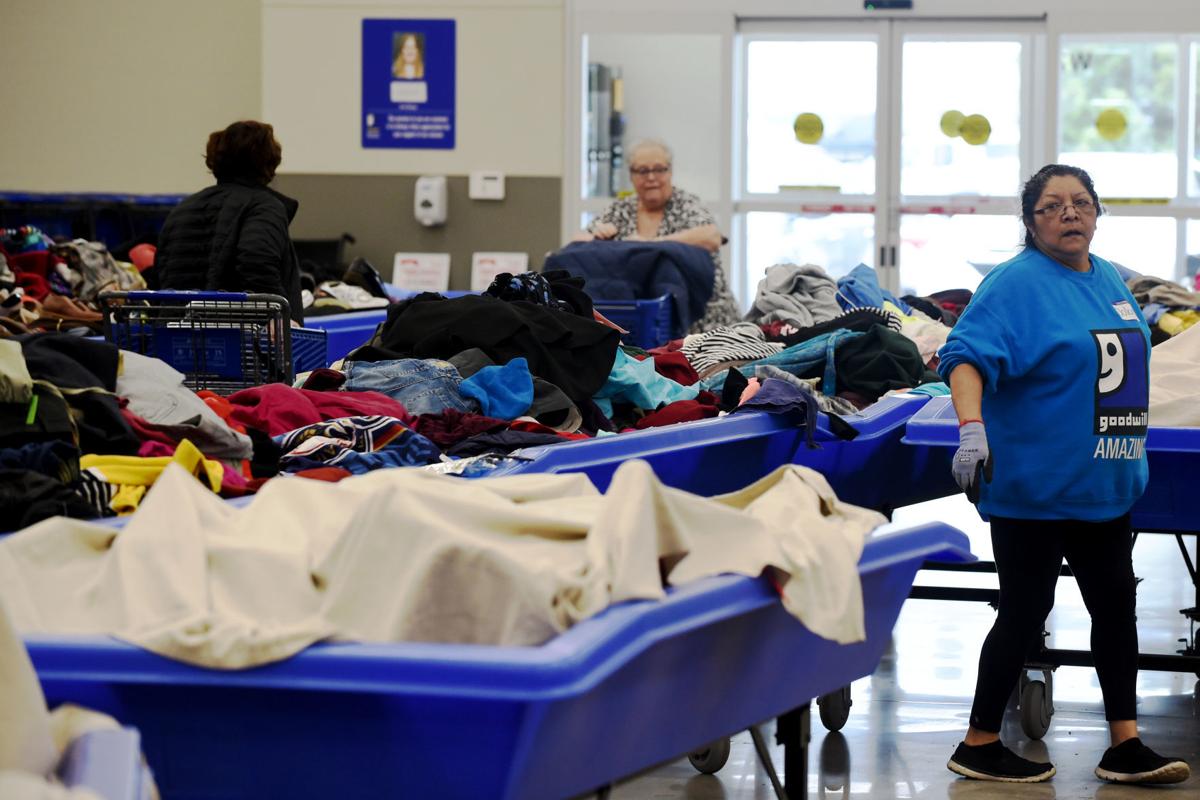 A employee lines up "Gaylords" full of unsold products to be unveiled at Goodwill's outlet store in Sturtevant. The store's No. 1 customers are resellers, who look to make a profit off of Goodwill's so-called "junk." 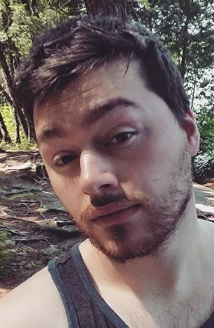