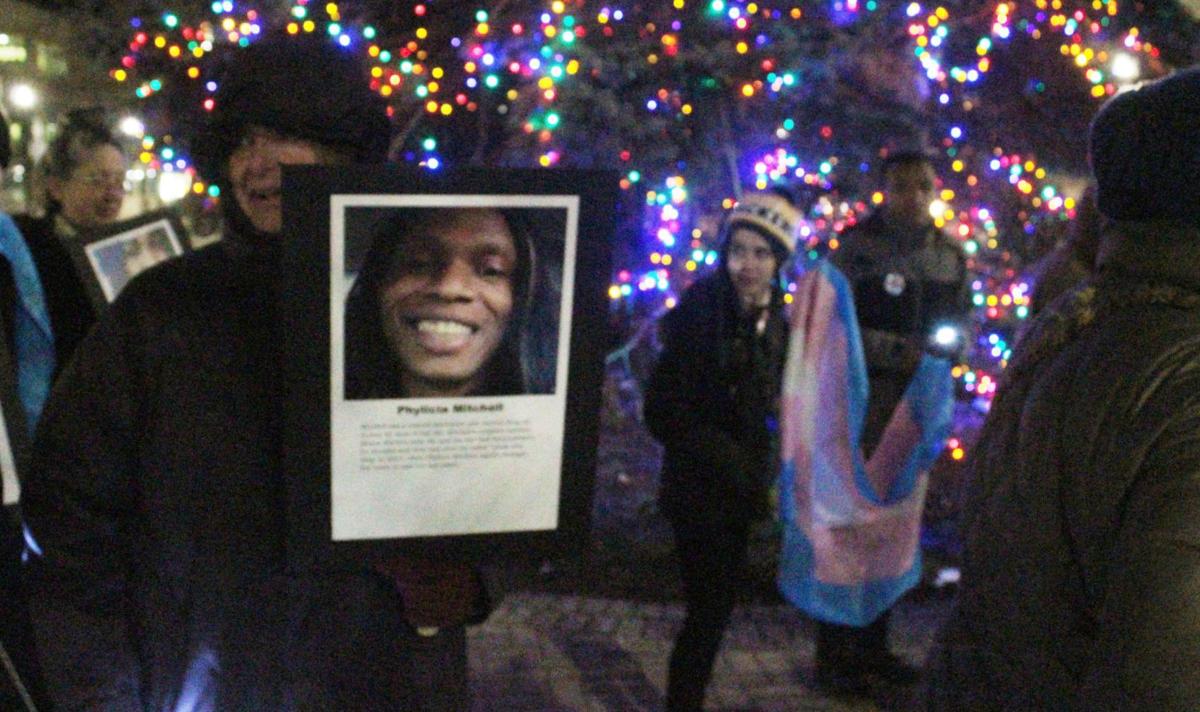 A marcher carries a poster with the photo of Phylicia Mitchell, a transgender woman who was killed in February in Cleveland. Twenty-three other posters were carried Downtown by marchers Tuesday during a Transgender Day of Remembrance ceremony. 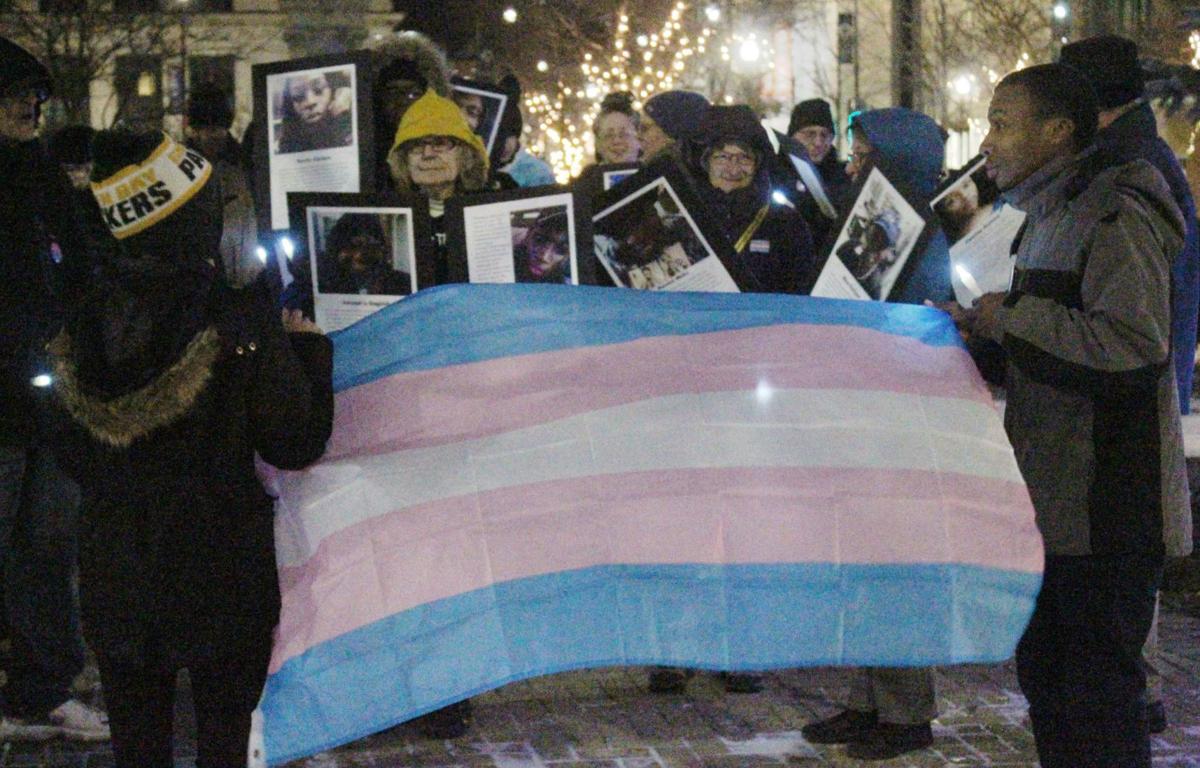 The transgender pride flag is carried Tuesday during a vigil for the Transgender Day of Remembrance held Tuesday at Monument Square. 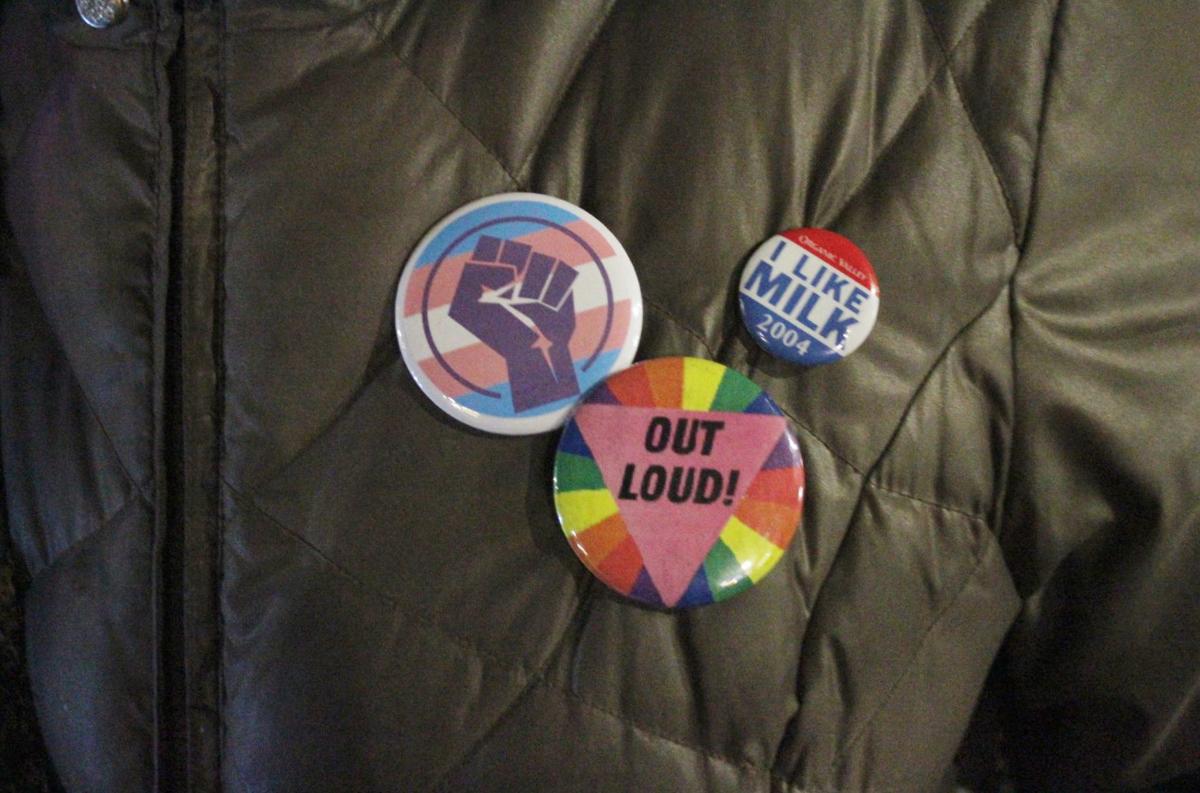 A marcher wears three pins on their jacket Tuesday, showing solidarity with the LGBT community. 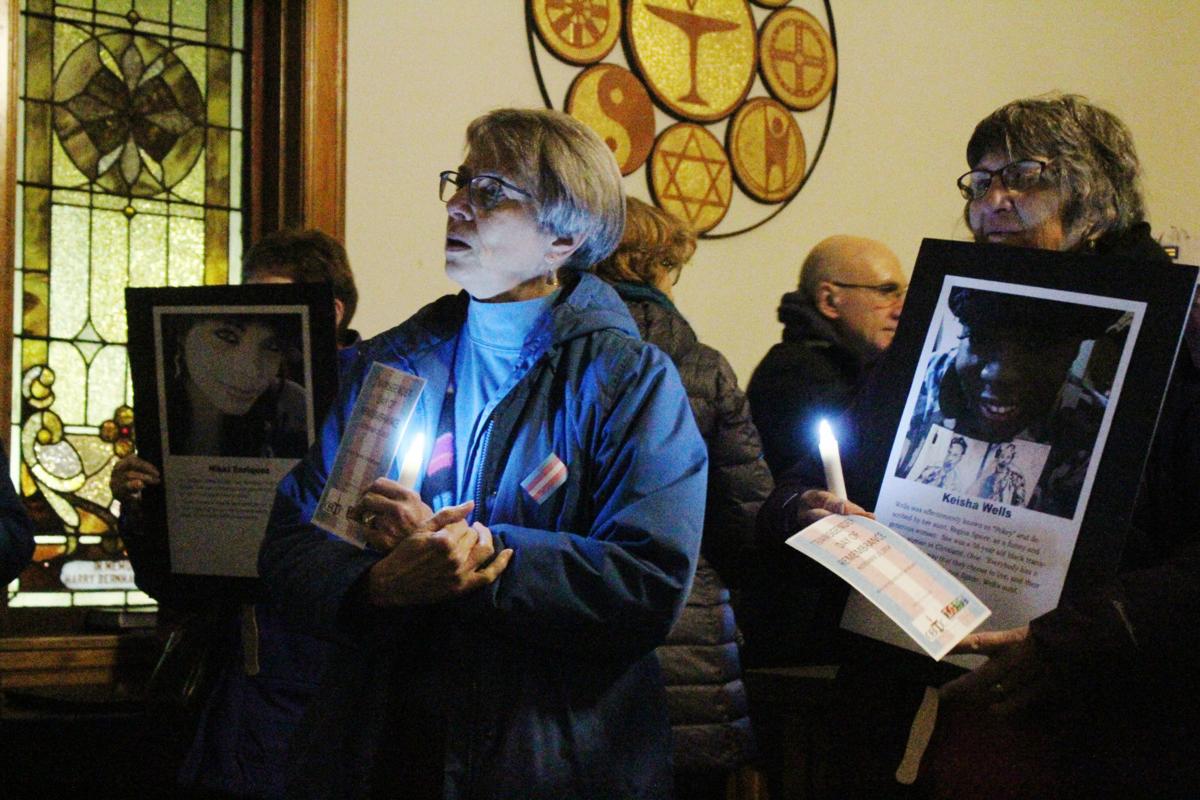 Vigil attendees hold electric candles and posters, honoring the 24 transgender people who were killed this year in hate crimes, during a special memorial service at Olympia Brown Unitarian Universalist Church on Tuesday.

RACINE — Elena Dominguez has a good job as an engineer and mechanical safety expert. Now in her 60s, Dominguez has three sons and two grandchildren, lives on the south side of Milwaukee, and is a board member for the Milwaukee LGBT Community Center.

She’s happy, and even happier to be living as herself.

Dominguez came out as transgender at the age of 55. Twenty years ago, Dominguez doesn’t think she would’ve been able to find the happy life she enjoys now.

For decades, Dominguez knew she didn’t feel right in a man’s body, but never felt it was safe to try living as a woman. When Dominguez eventually did come out, she and her wife separated, but she was still able to keep her job and maintain relationships with her kids.

“In my generation, we didn’t understand what gender really meant,” she said. “It is my duty to be out there in society and not to hide.

“In all social movements of the world,” Dominguez continued, “it’s a progression, never as fast as we want it to be.”

Dominguez was one of five transgender people and advocates who spoke Tuesday night inside Olympia Brown Unitarian Universalist Church as part of this year’s Transgender Day of Remembrance, organized by the Racine-based LGBT Center of SE Wisconsin. The candlelight vigil, attended by about 50 people Downtown, honored the memories of 24 American transgender people who were killed in 2018.

The LGBT Center considers all 24 deaths to be hate crimes.

“The thought of being attacked is on my mind daily,” said event organizer William Beard, a 27-year-old transgender man from Kenosha.

The vigil began at Monument Square at 6 p.m. Tuesday. From there, Beard led a march to Olympia Brown Church, 625 College Ave. Marchers carried posters with the faces and names of the 24 victims.

“How mankind can treat each other and how transgender people have been targeted, I still cannot believe it,” Dominguez said.

Beard said he came out as transgender in 2012. That was after he met another transgender man at a bar in Kenosha. Now, Beard wants to make sure that he is visible in the community, thus encouraging others to come out as well.

Ever since he was a kid, Beard said “I always saw a boy in the mirror,” even though he didn’t come out until six years ago.

“We are born this way … I am a proud transgender man who is out there for those who cannot be,” Beard told vigil attendees. “We must be visible when it is safe to do so … I can save lives by connecting with others.”

Another speaker at the vigil was Gari Green, a retired Episcopal pastor who was born male but came out as a transgender woman in 1991. She said she lost her job at a Milwaukee church in the mid-1990s as a result of being transgender, but has managed to preserve her marriage and has enjoyed continued support from her family.

Speaking just below the pulpit at Olympia Brown Church, Green preached that “it is important for all people, not just transgender people, to have a spiritual basis.”

Despite several Christian denominations often being characterized as anti-LGBT, Green believes that the stories of the Scriptures still hold truths for people who identify as LGBT.

“The Scriptures are full of stories journey and learning and new life,” Green said. “There’s too much good in those stories to pass up.”

“We have come so far in thinking about gender,” added Barb Farrar, the the LGBT Center of SE Wisconsin’s executive director.

Farrar equated gender to the etymology of snow. The Inuit people (often referred to as Eskimos) have more than 50 different words that refer to all the different forms of snow, while there are really only a few words in English, like snow, sleet and slush.

Although often used interchangeably in conversation, the words "gender" and "sex" are usually treated as holding different definitions.

According to Medical News Today, Sex "refers to the biological differences between males and females, such as the genitalia and genetic differences."

Gender, on the other hand, "is more difficult to define, but it can refer to the role of a male or female in society, known as a gender role, or an individual's concept of themselves, or gender identity."

“I always saw a boy in the mirror."

So far in 2018, 24 Americans who were transgender were killed in what has been identified as a hate crime by the LGBT Center.

Racine has lost one of the leaders of its LGBT community. This is Rae Antczak's story.

Editor’s note: This story discusses suicide and may not be suitable for all readers.

LGBT Center wants to get the word out about Equality Prom

RACINE COUNTY — Next month, the LGBT Center of SE Wisconsin will be hosting its eighth annual Equality Prom.

RACINE — The LGBT Center of Southeastern Wisconsin is advocating for the City of Racine to ban conversion therapy, a practice widely condemned…

A marcher carries a poster with the photo of Phylicia Mitchell, a transgender woman who was killed in February in Cleveland. Twenty-three other posters were carried Downtown by marchers Tuesday during a Transgender Day of Remembrance ceremony.

The transgender pride flag is carried Tuesday during a vigil for the Transgender Day of Remembrance held Tuesday at Monument Square.

A marcher wears three pins on their jacket Tuesday, showing solidarity with the LGBT community.

Vigil attendees hold electric candles and posters, honoring the 24 transgender people who were killed this year in hate crimes, during a special memorial service at Olympia Brown Unitarian Universalist Church on Tuesday. 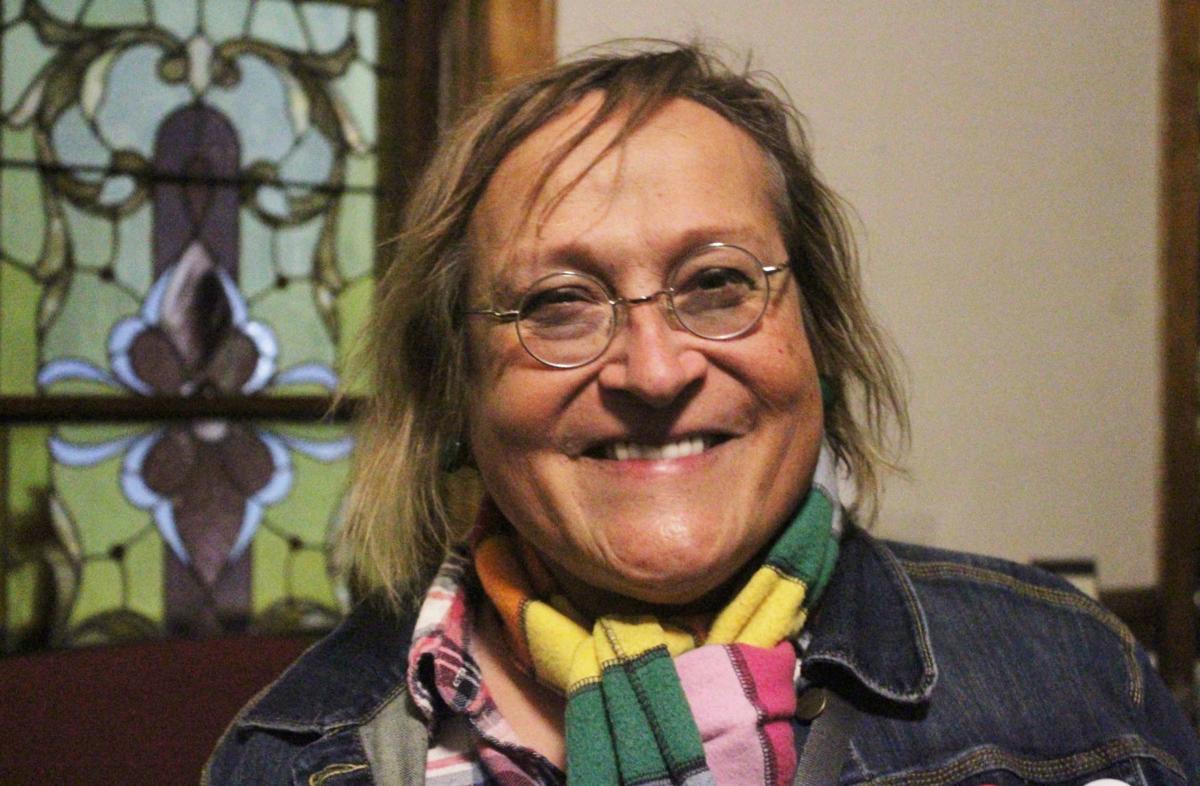 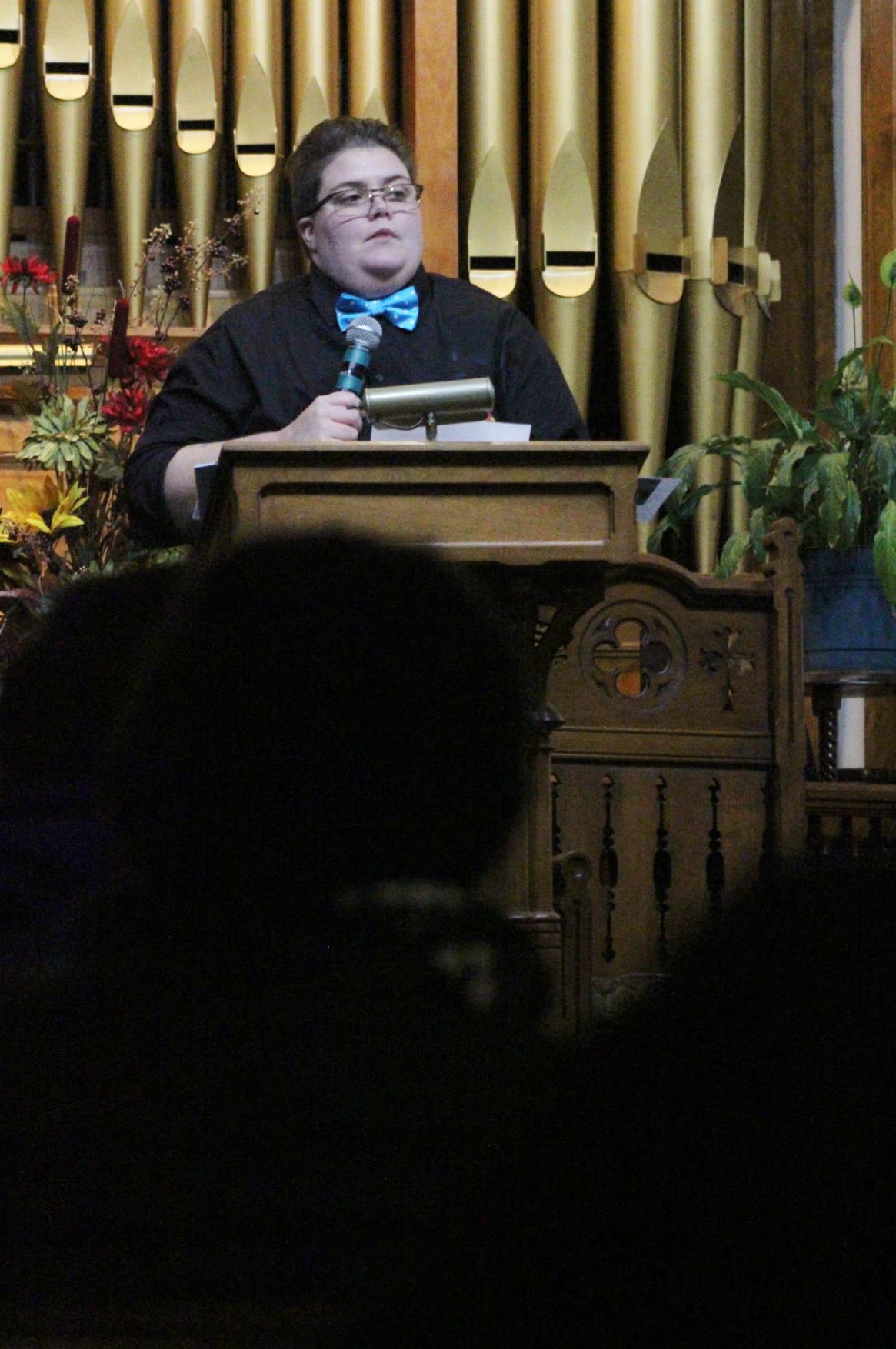