Become a Member
Read Today's E-edition
Share This
The RITE stuff: training focuses on emotional intelligence to improve policing
0 Comments
Share this
1 of 2 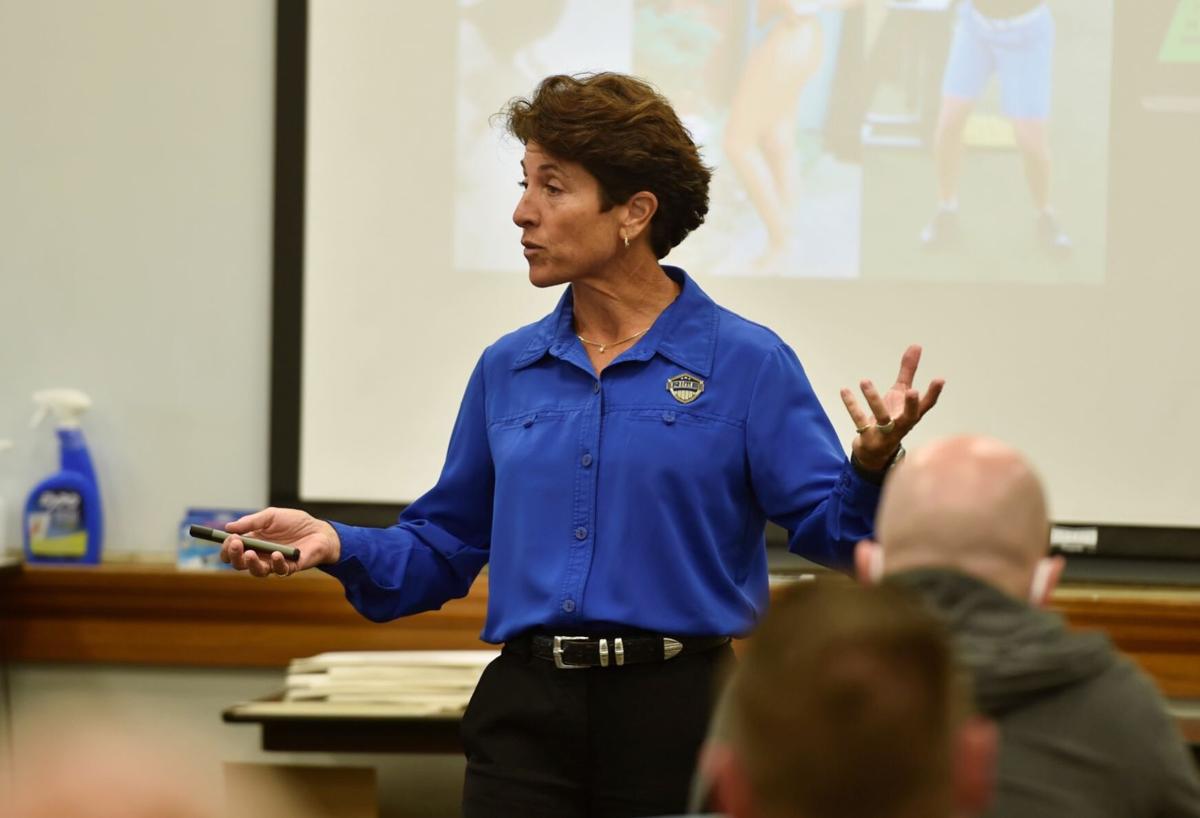 Randy Friedman, a former sports and executive coach and one of the co-founders of RITE Academy, speaks in front of a room of ranking Racine Police officers at the City Hall Annex, 800 Center St., on Monday. Friedman and her co-founder, Linda Webb, will be training all RPD officers this week on emotional intelligence and how it can improve policing. 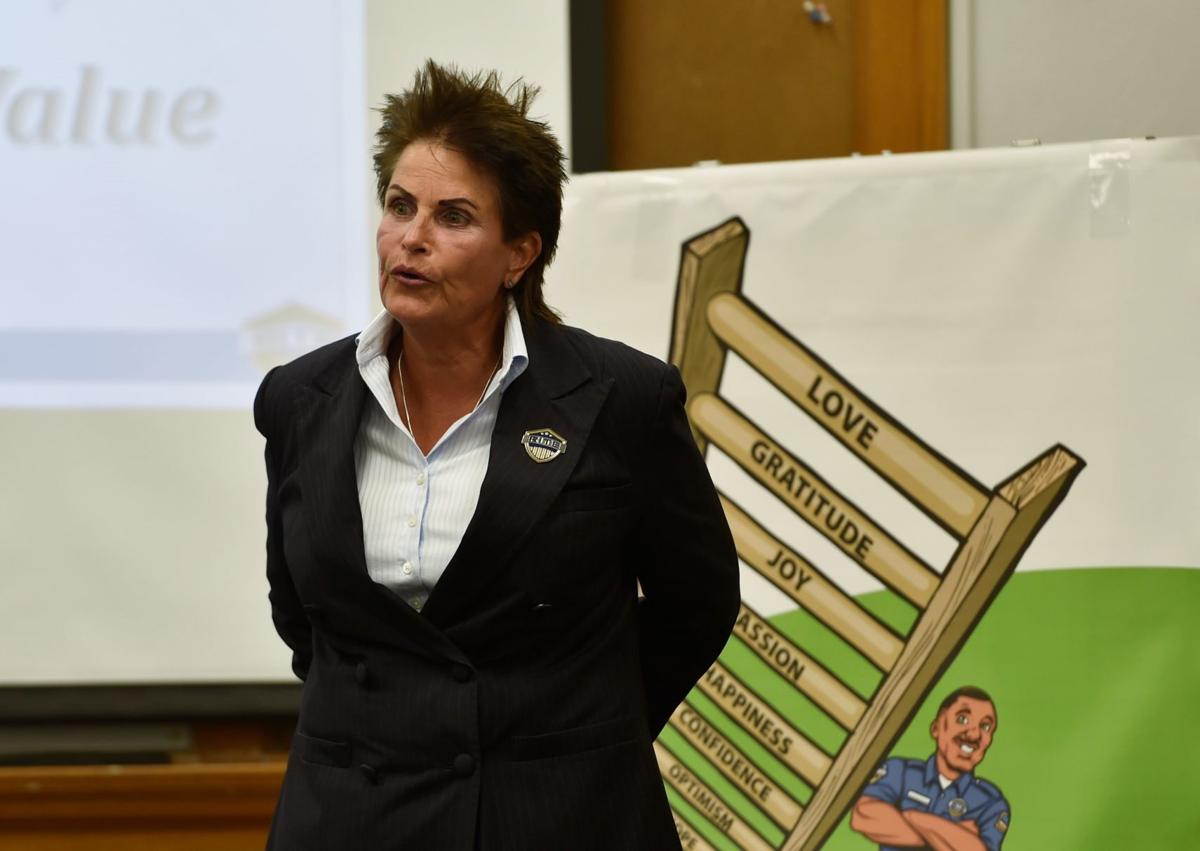 Linda Webb, a former police officer and one of the co-founders of RITE Academy, speaks in front of a room of ranking Racine Police officers at the City Hall Annex, 800 Center St., on Monday. Webb and her co-founder, Randy Friedman, will be training all RPD officers this week on emotional intelligence and how it can improve policing.

RACINE — When Linda Webb first entered law enforcement in 1982, she heard the old-timers on her department in Tampa say something that officers today are probably hearing: that policing was changing.

Her department had enacted a new set of policies that forbade officers from carrying brass knuckles and leaded gloves.

"Can you imagine if we rolled out of our patrol car with those things on now?" she asked Racine Police Chief Art Howell.

"It would make my job a lot harder," Howell said.

Webb said she's also noticed how smaller changes can impact interactions. Webb left policing to work as an investigator for a corporation. Very early on she was called into human resources because of an issue she wasn't even aware of — her use of profanity. She had to re-teach herself not to swear.

"And the last three years I haven't used any profanity to talk to a victim or to talk to a suspect," she said. "It is a learned behavior."

But the most dangerous habit she sees is policing today is officers suppressing their emotions. Webb said that when she went to the police academy, she was trained not to show emotion to the extent that it was as if she didn't have any.

"What happens when you hide all those feelings? You keep them inside they become a ticking time bomb," she said. "It's that type of behavior that is causing problems across the nation."

That's why, when Ferguson, Missouri Police Officer Darren Wilson killed Michael Brown, she decided to team up with Randy Friedman, a longtime sports and executive coach, to start RITE (Racial Intelligence Training and Engagement) Academy, which teaches law enforcement how emotions can affect their actions and how to control emotions to improve job performance.

Howell had been in contact with RITE for about a year before they could be booked to train Racine Police officers. On Monday, they started with ranking officers and will continue with the rest of the department personnel throughout the week.

The central lesson of RITE's training is that officers who are able to read and manage their own emotions will do a better job of being socially aware and be in a mental space where they can develop connections with the community.

Friedman spent years working with top athletes on how to improve their mental game in order to improve their performance. If an athlete is angry, their muscles tense up which restricts their ability to move freely and to the best of their ability. She took those principals to the halls of corporate America and found the same rules applied.

"Awareness is the key to changing anything," Friedman said. "You’re never going to change your job if you’re like, 'I hate this job.'"

Webb gave the example of when she got a call for an older woman whose grocery cart was stolen. It was not an exciting assignment but Webb retrieved the cart and the interaction was business as usual until she smelled the woman's pineapple upside-down cake. The woman offered her a small slice and Webb asked if she could have the recipe. Years later, when Webb was a detective, the interaction with that woman and all the other people she had connected with on a human level became invaluable when she was investigating crimes. Webb called this "building value" in the community.

One reason officers aren't always able to build those connections is the amount of stress and trauma inherent to their jobs according to Webb.

"People have to realize that over a series of years police officers see a lot of horrific things. The trauma they experience: They go to suicides they go to traffic accidents," Webb said.

On top of that, officers are human beings with their personal problems with their families or, like everyone else right now, COVID-19.

"If you're mad and angry at the world and now you got to engage with the public, it's a recipe for disaster," Webb said.

The training also deals with de-escalation techniques for when situations become tense and also encourages officers to intervene when they see an officer losing control of their emotions.

"If you see your police partner out of control what we're saying is you step in. If you're the secondary officer you step in, tap out and take over because not only are you going to save that community member's life you're going to save that other officer's life that's out of control," Webb said. "The whole purpose of this class is to talk about emotions, realize that emotion drives behavior — good and bad — and the importance of how you as a police partner need to step in and do your duty to intervene."

Webb and Friedman are pretty busy these days. And Webb wants to emphasize that police departments across the country are trying to change, even if its not fast enough for some members of the community.

"It's like moving the Titanic," she said. "You've got to give it time."

In photos: Police officers, Malicki's help feed the community in May 2020

"If you're mad and angry at the world and now you got to engage with the public, it's a recipe for disaster."

Burlington's city planner is cautioning that the development would take place on land that has historic value, as well as environmentally sensitive wetlands. "The proposed plan seems aggressive," he wrote in a report.

Investigators are seeking help to identify a suspect in the Nov. 12 illegal shooting of a trophy-caliber deer near Waterford, in an incident that police call "disturbing," partly because it happened in broad daylight near homes.

LAKE GENEVA — A man reportedly sexually assaulted two children he knew, both under the age of 16.

Randy Friedman, a former sports and executive coach and one of the co-founders of RITE Academy, speaks in front of a room of ranking Racine Police officers at the City Hall Annex, 800 Center St., on Monday. Friedman and her co-founder, Linda Webb, will be training all RPD officers this week on emotional intelligence and how it can improve policing.

Linda Webb, a former police officer and one of the co-founders of RITE Academy, speaks in front of a room of ranking Racine Police officers at the City Hall Annex, 800 Center St., on Monday. Webb and her co-founder, Randy Friedman, will be training all RPD officers this week on emotional intelligence and how it can improve policing.