RACINE — Danae Vinson dreamed of owning her own nail salon ever since she was 16.

She was a case worker when the COVID-19 pandemic struck, pushing her to pursue what she really wanted to do.

She earned her manicuring credentials and opened Goddess Nails, 333 Main St., Racine, after she saw the space for rent. A grant from the state helped “push everything forward,” she said.

Now, she’s proud of her business and its four employees. She noted she’s had a lot of out-of-state customers, including those from Illinois. A customer from Colorado was present Thursday morning during a visit from state and local officials.

Gov. Tony Evers’ administration says it has made a combined $7.5 million investment in the Racine business community through the use of federal pandemic-related funds, with Racine County receiving a $216 million overall investment including nearly $14 million for small business support.

Republicans, particularly in this election year, have attacked Evers, accusing him of too forcefully using his office to shut down businesses amid COVID-19. Evers has largely responded by pointing to the millions in new investments made, helping businesses like Junoesque, Goddess Nails and Social on Sixth open.

Overall investments supporting small businesses have totaled over $1 billion statewide. Evers announced the Main Street Bounceback grant program — part of the state’s response to COVID-19 — in the spring of 2021 with the first grants made in August 2021, using $75 million in federal American Rescue Plan Act funds, to help small businesses and communities grow by populating vacant storefronts with new businesses and nonprofits.

“You’re in the right place, and I know you’re pursuing your dreams. That makes us so happy,” Blumenfeld said, addressing Vinson.

Earlier this week, Evers announced the state will provide an additional $25 million investment into the program, for a total investment of $100 million to help entrepreneurs open new businesses or expand their existing operations.

Go to BadgerBounceback.wi.gov to view pandemic-related assistance information and the latest data and success stories about state COVID-relief investments.

Owner and esthetician Bree Smith of Junoesque by Bree, 330 Main St., said the grant allowed her to keep her staff paid and add new services to the business such as spray tanning. She said she loves being in Downtown Racine.

“Thank God for you,” Mason told Smith. “It’s really helped, obviously, your business, but it’s helped the downtown to have you here. We’ve had a lot of new business startups on Main Street.”

He added Junoesque adds vibrancy and diversity to Main Street.

Blumenfeld told each business owner that if Evers were there, he would be thrilled to see the owners thriving, coming back from the pandemic and achieving successes as a result of the grants.

“It’s really exciting to hear and see,” Blumenfeld said. “Keep up. Just keep on keeping on what you’re doing, because it’s amazing.”

Joan Roehre spent 28 years working in K-12 education and then worked in nonprofit, including leading Visioning A Greater Racine. She said she always was fond of the space at 324 6th St., which had been Longshot Vinyl last.

“This space is really special to me,” Roehre said. “It’s a very cool, historic building … so I was drawn to it.”

When the space became available, she came up with the idea to transform it into an event space.

She opened the doors of Social on Sixth in March 2020. And with the help of the grant, she has been able to keep it going. She described the extra money as a “buffer” that helped her pay rent, get a liquor license and buy inventory.

“I still have not received any monies from this business,” she said. She watched her bank account “just go like that...

She’s considering hiring an employee so she doesn’t have to run things entirely herself.

“It’s just amazing to see the downtown here in Racine, and you’re a big part of this,” Blumenfeld said, addressing Roehre. “We’re here to celebrate you today.” 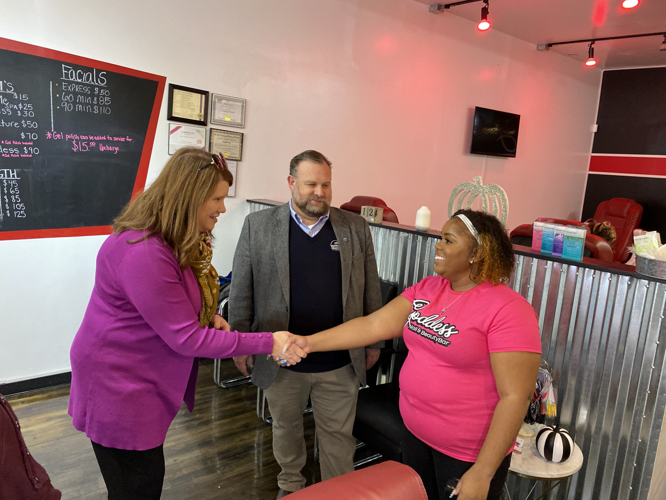 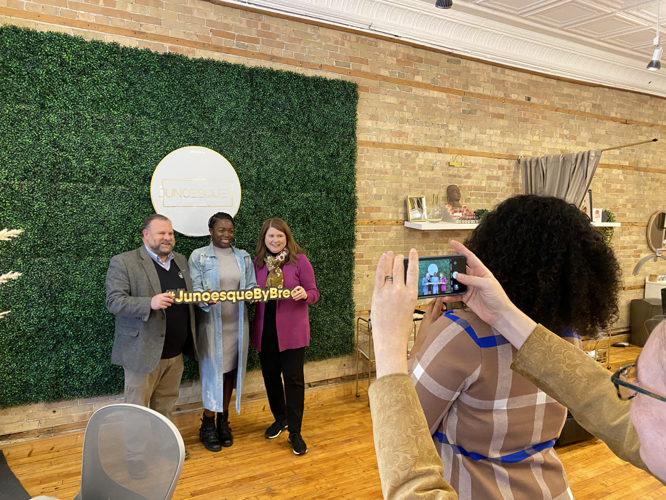 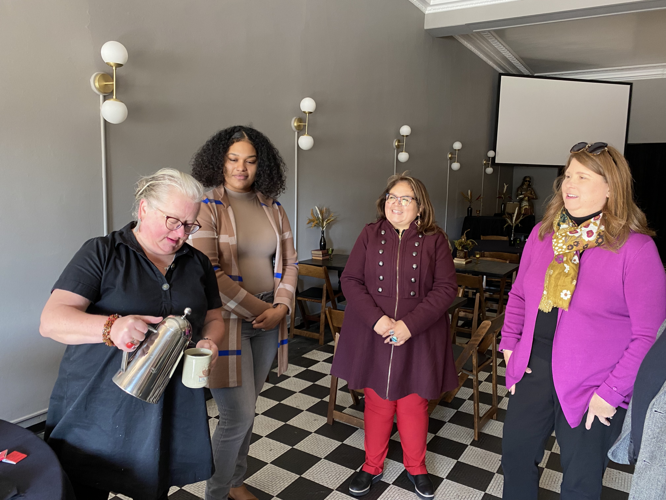