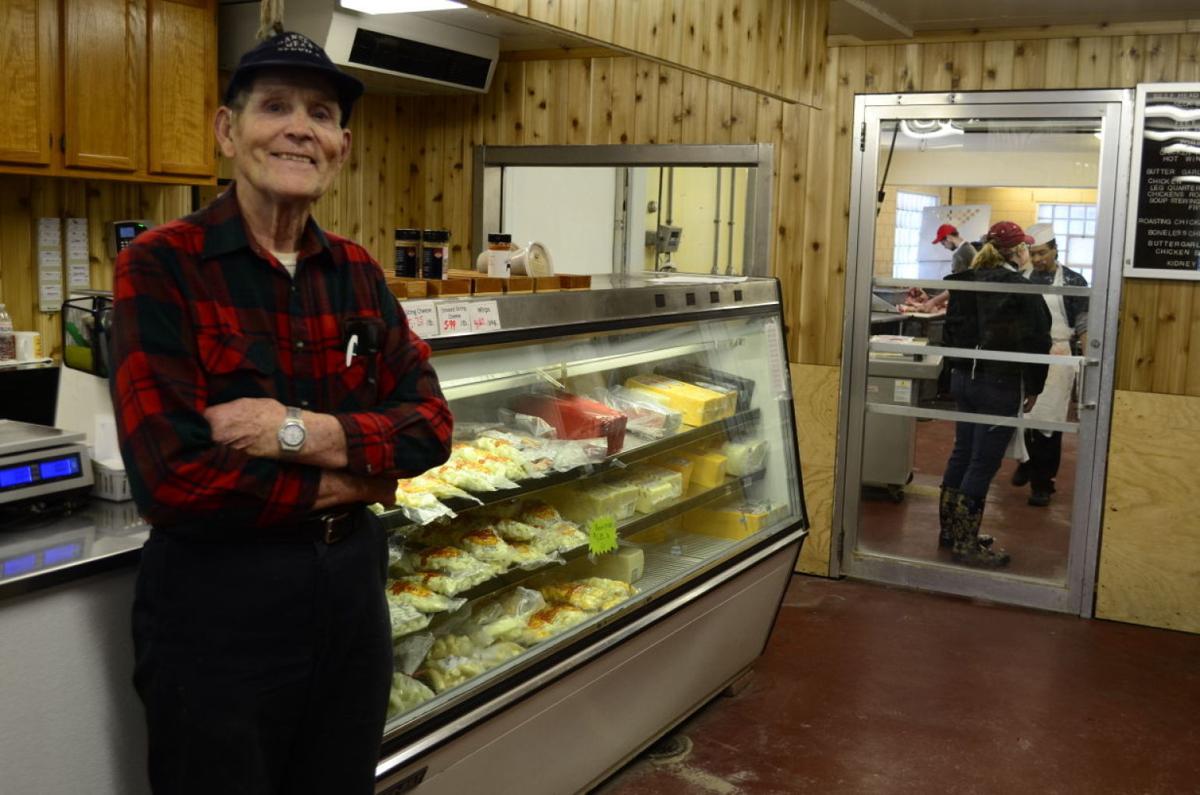 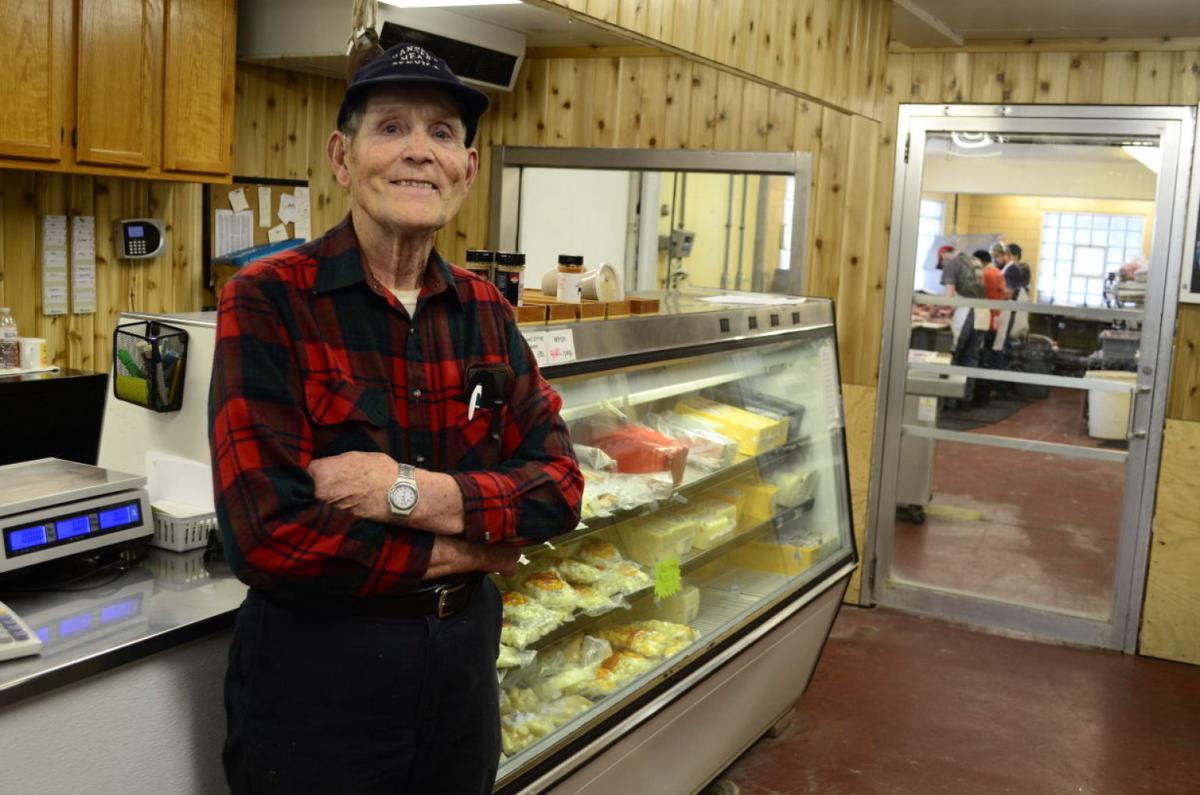 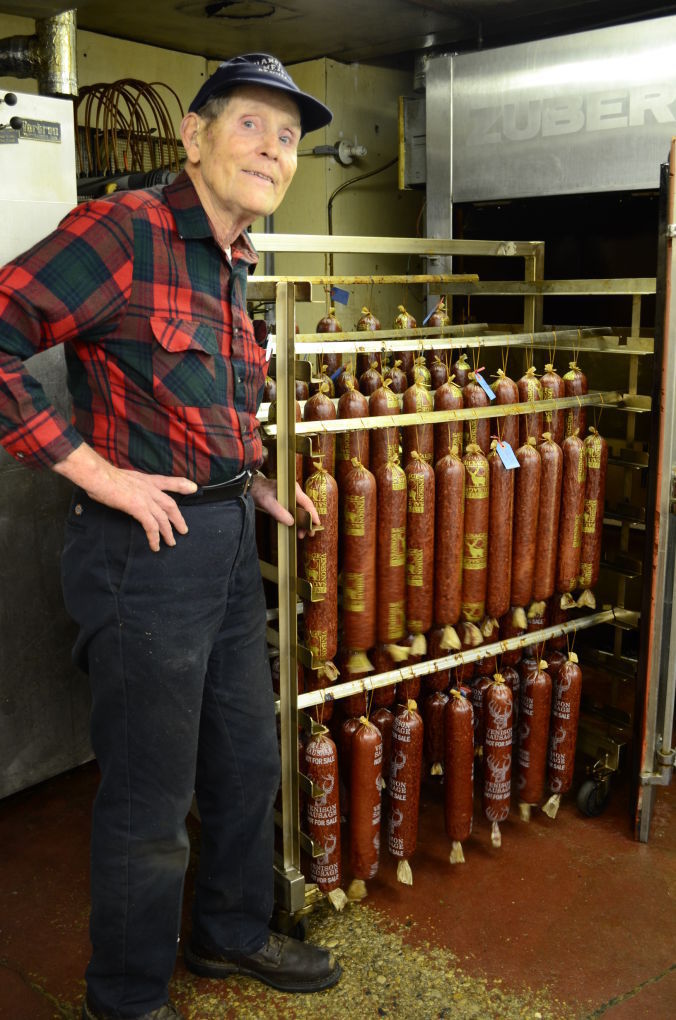 Bernie Strueder, former owner and current employee at Harry Hansen Meat Service, 10407 Highway K in Raymond, recently reached two milestones. He is shown here, with racks of summer sausages, on Thursday, the day he turned 75. And last year Strueder reached the 50-year mark since he started working at the country butcher shop.

Strueder will come in at 1 a.m. and start the smokehouses so that by the time the others get to work in the morning, there’s already finished products to package.

And he’s the kind of employee with a lifetime of meat-cutting experience, who still helps on slaughter days, who keeps equipment running but won’t run from the least pleasant duties of a meat-processing plant.

Strueder hit two milestones this month. On Thursday, he turned 75. And this month he reached the 51-year mark since first going to work for Hansen Meat at age 24.

Hansen Meat Service’s main business is slaughtering and butchering animals for area farmers and their customers, business owner Rick Kastenson explained, and also does some retail sales at the store.

Strueder grew up on area family dairy farms as one of eight children. He attended high school at the former Boys Technical and Trade School in Milwaukee, where he learned carpentry and cabinetry.

But he decided to return to the family farm and took a part-time job at Hansen Meat. Strueder credits the late Thurman Davis for teaching him meat cutting, something he said took about five years to master.

Fourteen years after his start there, Strueder and his brother, Joe Strueder, bought Hansen Meat. Joe Ertl worked for them for almost 20 years but left after the brothers sold the business in early 2005.

“(Bernie) was an excellent boss,” Ertl said. “It was a family operation, and you didn’t feel like an employee — you felt like family. They cared about you as a person.”

Through the years, the Strueders were good community patrons, said Dave Moyer, vice president with Community State Bank, farmer and emcee at Racine County Fair auctions. When it came time to for youths to sell their animals, Bernie was always there, ready to bid, Moyer said.

“He was always at the top of the list of supporters,” Moyer said. “And the new owner, Rick Kastenson, is no different.”

Strueder’s work record at Hansen isn’t unbroken; he left for four years after he and Joe sold the business in 2005. During that period of being away he — what else? — worked, for his brother-farmers.

“They never run out of work,” he said. “And when they see my truck home, my phone would ring.”

But when Kastenson bought the business in 2009, he asked Strueder to come back and help get things on track.

And Strueder still has no plans to leave. He said he’ll quit only “When they don’t need me anymore.”

That’s a day that may never come.

RACINE — After six months of planning and development, the ongoing revitalization of Rapids Plaza takes a major step forward with Saturday’s g…

Alleged drug dealer reportedly beats victim with a bong, steals over $2,500 in cash and electronics

MOUNT PLEASANT — An alleged drug dealer reportedly beat a victim with a glass bong during an armed robbery, and allegedly stole multiple elect…

MOUNT PLEASANT — An alleged habitual alcohol thief has been charged after stealing over $300 worth of alcohol in a three-week span at Festival Foods.

Bernie Strueder, former owner and current employee at Harry Hansen Meat Service, 10407 Highway K in Raymond, recently reached two milestones. He is shown here, with racks of summer sausages, on Thursday, the day he turned 75. And last year Strueder reached the 50-year mark since he started working at the country butcher shop.