RACINE — A Wisconsin Appeals Court has ruled that the city’s Safer Racine ordinance was unconstitutional.

The decision, issued Wednesday, affirms the decision issued by Racine County Circuit Court Judge Jon Fredrickson more than a year ago. Fredrickson had overturned the city’s order and ordinance that aimed to restrict gathering, and closed certain businesses, amid the rising COVID-19 pandemic. Fredrickson wrote at the time that the city’s action was “unconstitutionally vague and overbroad, and is unenforceable as drafted.”

Fredrickson’s striking down of the order was put on hold when the city appealed his decision, allowing the city to enforce Safer Racine rules such as lowering maximum capacity of businesses and banning mass gatherings in certain places throughout the pandemic.

Tony Evers in a mask

The Appeals Court’s Wednesday decision cited prior court decisions. It explicitly referenced the statewide emergency order known as the “Safer at Home Order” issued by Gov. Tony Evers’ administration, which the Wisconsin Supreme Court struck down May 13, 2020, as part of the reasoning for declaring Safer Racine unconstitutional.

This decision has no immediate effect. The Safer Racine ordinance is no longer in effect, having been loosened throughout 2021 and officially rescinded at the end of June.

However, this decision could have an effect in the event of another pandemic, or if a coronavirus variant spreads wildly. It could limit the city’s and other municipalities’ abilities to issue orders that limit human interaction during a pandemic, or at least push them to be more specific in how orders and ordinances are written.

No further appeal is expected.

A statement from a City of Racine spokesman, issued Wednesday, reads: “The city was dealing with a unique and dynamic circumstance in an unprecedented time of a global pandemic and responded based upon our understanding of the law. While we understand what the court said, the City acted in good faith to try to save lives and protect the health and safety of Racine’s residents and visitors. The court’s opinion today gives us better guidance as to what is permissible under the law should we ever be in this situation again.”

Fredrickson declined to comment on the record about the case.

More than a year ago

This lawsuit began May 21, 2020, when Corian and David Yandel, owners of Harbor Park CrossFit, brought forth an argument that sought to have Racine’s order declared “unlawful, invalid and unenforceable.”

When Fredrickson ruled that the city’s order, issued under the authority of Public Health Administrator Bowersox, was unconstitutional, the City Council quickly acted by passing the Safer Racine ordinance, which effectively codified Bowersox’s order in law.

Fredrickson then quickly ruled that that ordinance was unconstitutional. The city quickly appealed that decision, leading to the hold that was put on Fredrickson’s decision, which had lasted for almost 14 months until Wednesday’s conclusion.

“The decision says that the ordinance is unconstitutional as written: it is too vague, overbroad, nobody can understand it,” Anthony Nudo, an attorney representing Yandel, said following the Appeals Court’s Wednesday decision.

Yandel had argued that he was losing customers to competitors who were located outside the city’s jurisdiction, since his capacity was limited.

According to Wednesday’s decision: “Ordinances benefit from a presumption of constitutionality, but when an ordinance regulates the exercise of First Amendment rights, the burden shifts to the government to demonstrate the constitutionality of the regulation beyond a reasonable doubt.” The Appeals Court, then, says the city failed to do that. “We agree with the circuit court that the Safer Racine Ordinance is overbroad and vague, and it is therefore unconstitutional.”

The Appeals Court further explained that “an ordinance is overbroad when its language, given its normal meaning, is so sweeping that its sanctions may be applied to constitutionally protected conduct that the state cannot regulate.” The decision cited the “blanket prohibition” on indoor and outdoor mass gatherings on city land, noting that “prohibition on group expressive activity captures constitutionally protected conduct within the ambit of the ordinance and is therefore overbroad.”

Whether Yandel will receive any “declaratory judgement” falls to the Racine County Circuit Court, the Appeals Court said.

One of the three Appeals Court judges who issued Wednesday's decisions was the same judge who ordered stay on Fredrickson's overturning of Racine's rules last year — Paul F. Reilly. The other two judges were Mark D. Gundrum and JoAnne F. Kloppenburg. 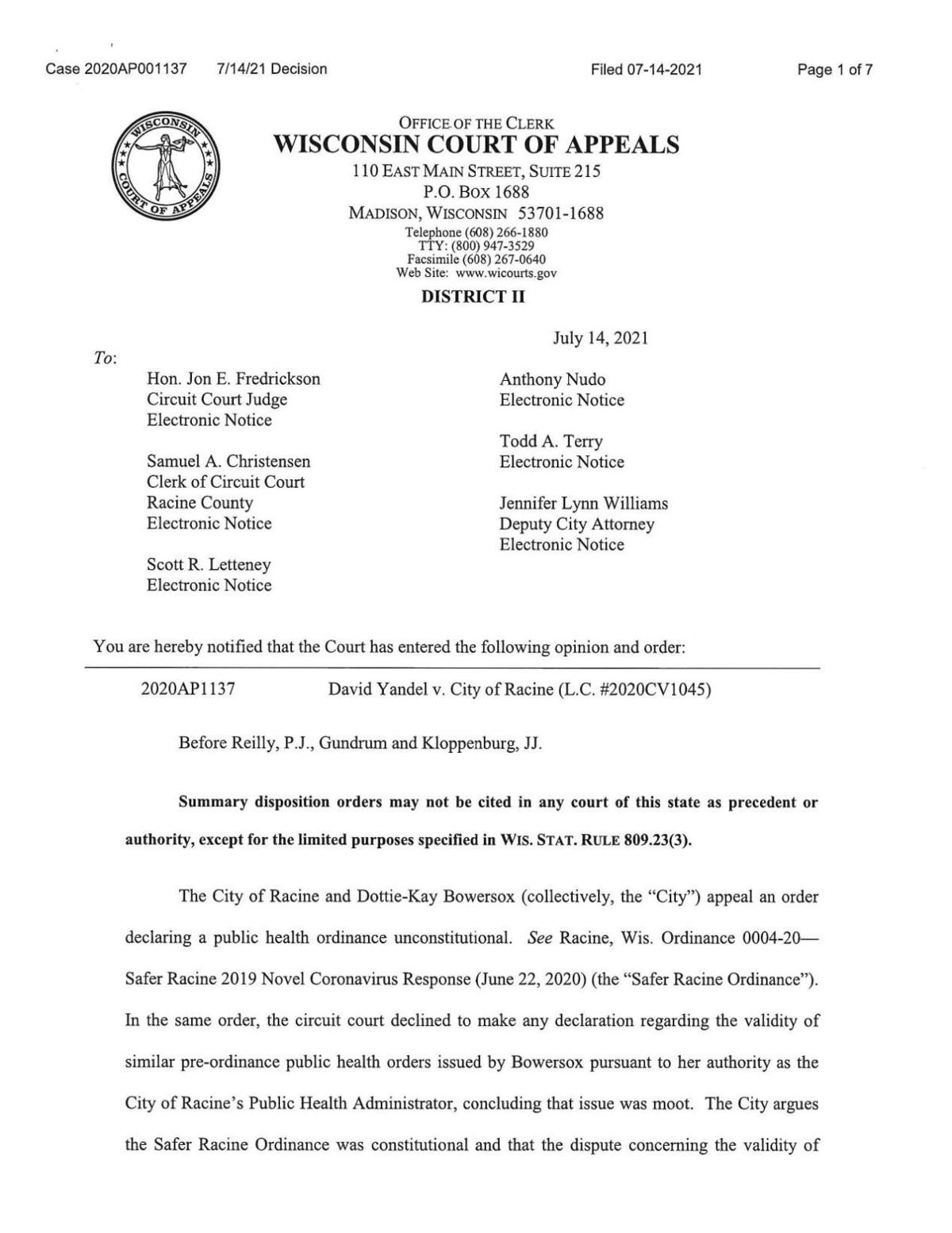 Signs at Maria's on Douglas

Car dealership in a pandemic

Find this story at JournalTimes.com to read the Appeals Court's decision in full.

New O&H Danish Bakery on Douglas Avenue, next to Starbucks, to open on Wednesday

The new location — which neighbors the new Starbucks in Caledonia — will take the place of the bakery currently at 1841 Douglas Avenue, which has been closed to the public since Saturday to transition into the new space.

Black swan: Rare bird making waves as residents wonder where it came from

People on Tichigan Lake in Racine County are swooning at the appearance of a spectacular black swan, a rare bird that is native to Australia, but has turned up in Wisconsin this summer.

WIND POINT — The closing date for the 4403 N. Main St. property has come and gone, but the saga involving concerned citizens, the developer an…

'Really out of control:' Neighbors in Burlington offered to help when a family's house was damaged by fire, but now the family is being accused of creating disturbances in the neighborhood with unsanitary conditions and disruptive behavior. 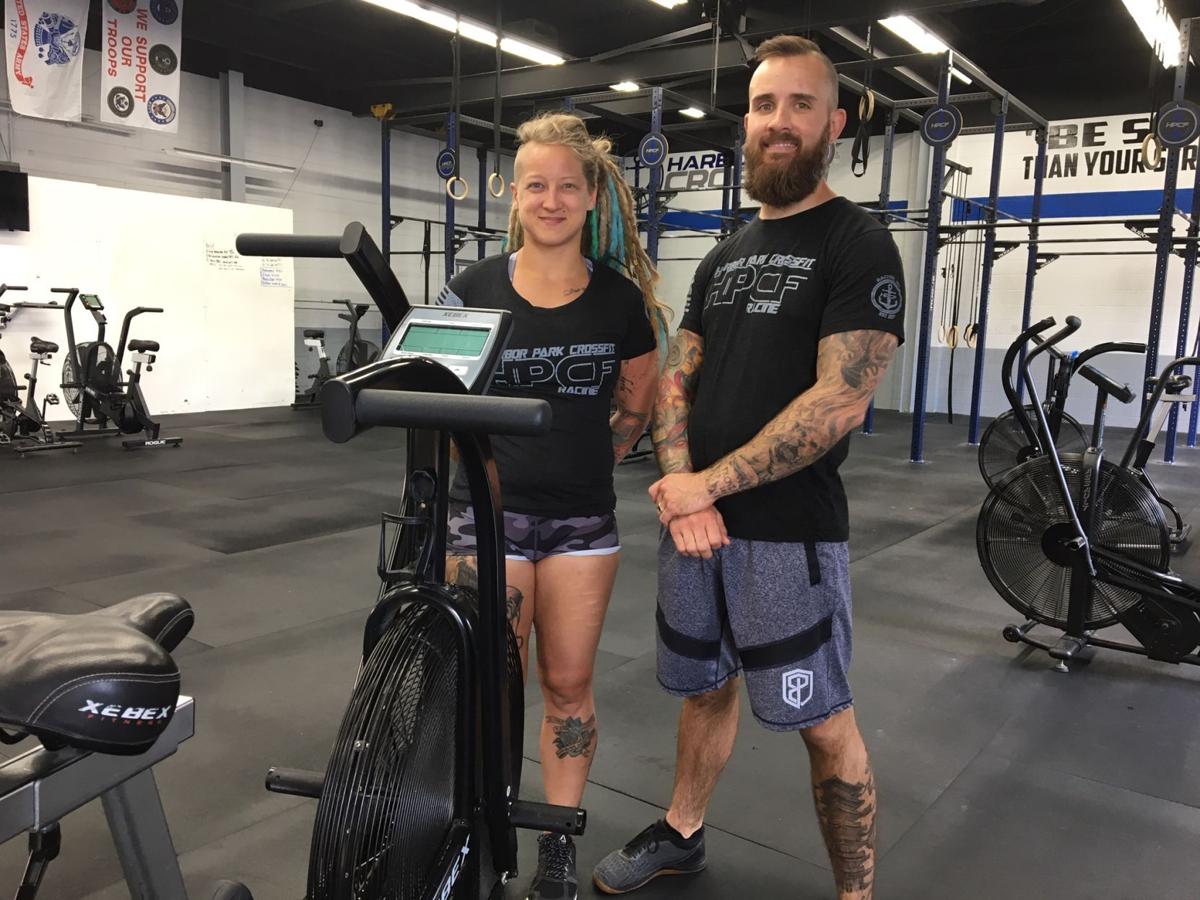 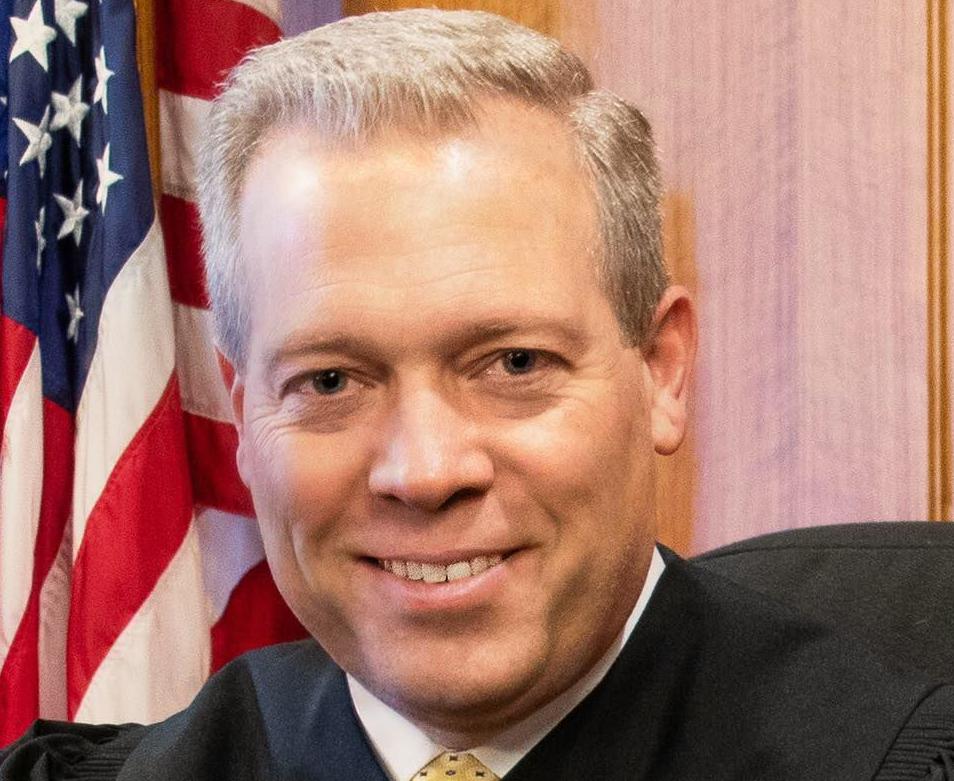