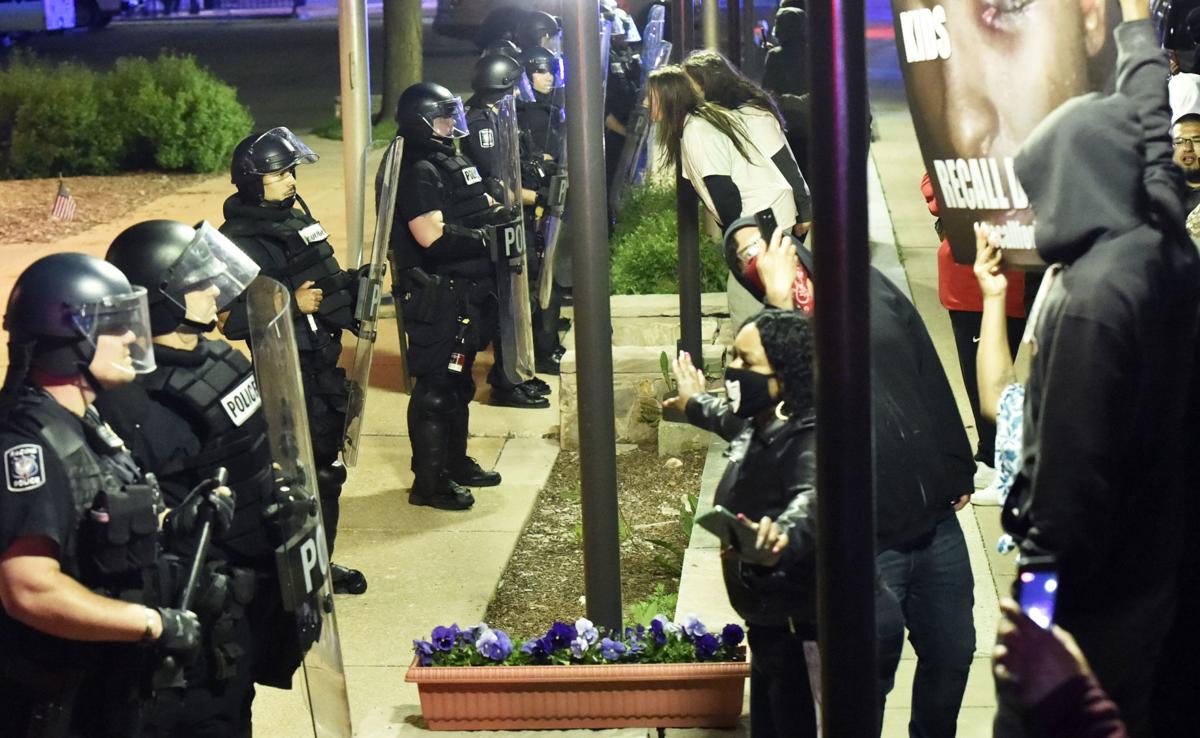 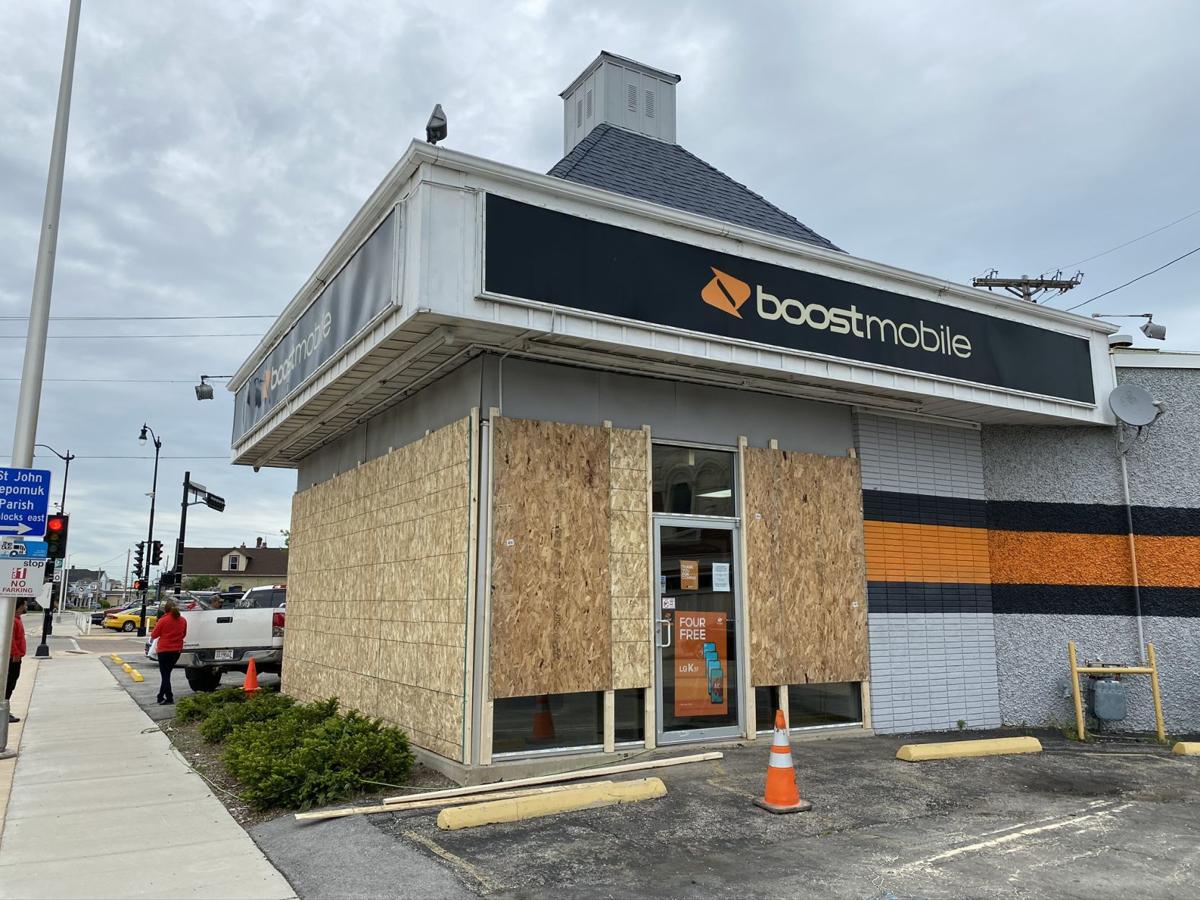 Boost Mobile, 1957 Douglas Ave., was broken into early Monday morning. Wooden boards take the place of where the glass was shattered. 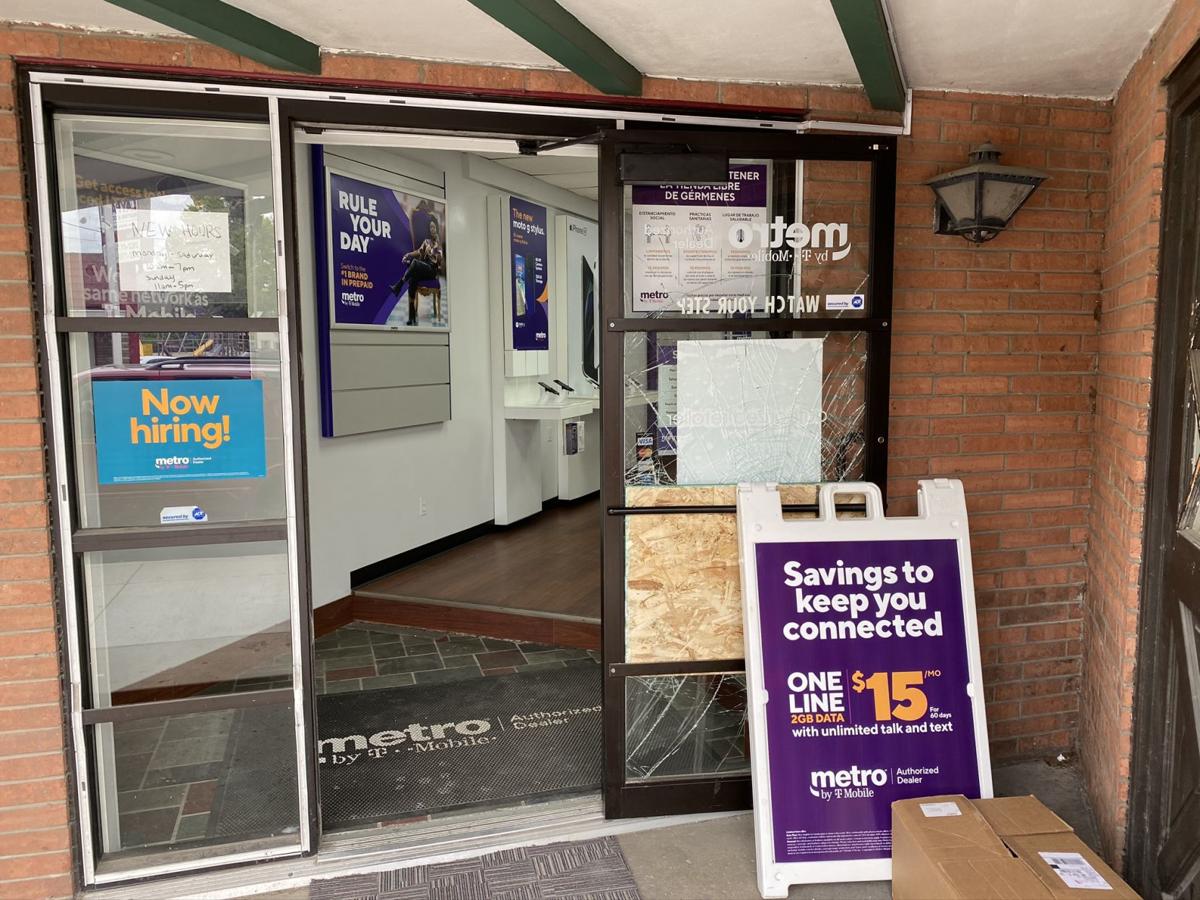 Metro PCS, 1639 Douglas Ave., has its front doors open. One of the doors has shattered glass where the burglars exited the building. 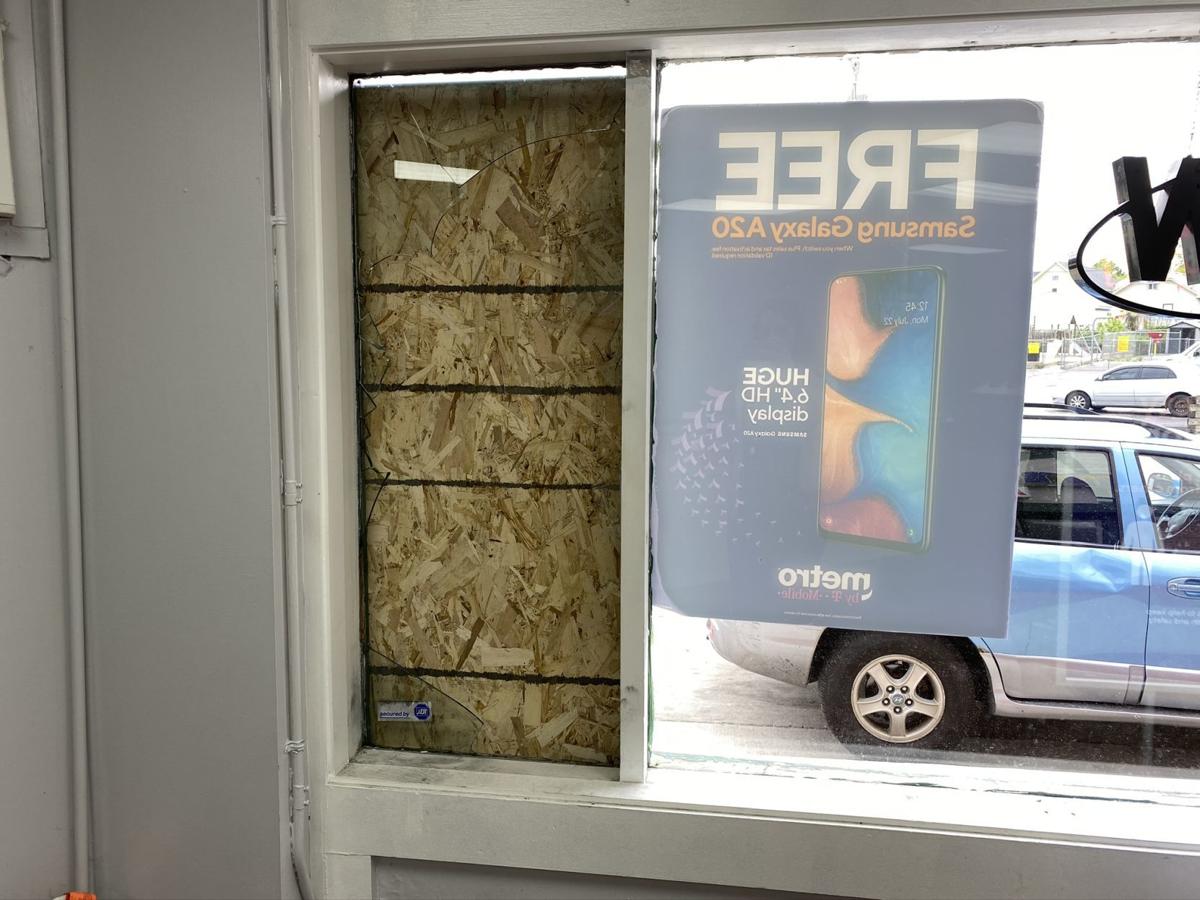 The front window to the Metro PCS storefront is shown from the inside. The burglars broke into the store through this window at Metro PCS, 1639 Douglas Ave., early Monday morning.

RACINE — Demonstrations that began late Sunday night on Monument Square started peaceful. But they ended with looting, acts of vandalism, and police ended up using tear gas at one junction after rocks and fireworks were directed at officers in riot gear in front of the Downtown police station.

Many of the protesters who joined the demonstration on Monument Square — which mainly consisted of chants, flag waving and music — decried those who looted or caused damage.

After a scuffle between demonstrators left one man with a head injury, others stepped in, asking those who instigated the fight to leave and then nursing the man’s injuries. And when a fire was lit next to a vacant building near Monument Square, demonstrators extinguished it.

After a brick was thrown through a window at Lux Beauty Salon late Sunday night, other protesters stepped in to prevent more damage from occurring and asking the thrower to leave. By Monday afternoon, the window had been partially repaired.

“We ain’t about that,” one man told The Journal Times regarding the property damage.

The demonstration got more heated when it reached the Racine Police Department, 800 Center St., after 1 a.m. Monday. About three dozen protesters, with more than 100 standing behind, yelled at officers in riot gear from the Racine Police Department and Racine County Sheriff’s Office. One woman yelled repeatedly “Why do you kill our babies!?” in front of a poster with a photo from the autopsy of Ty’Rese West, the 18-year-old from Racine who was shot after fleeing from a Mount Pleasant police officer last June.

Others insulted officers’ and tried to goad them into a fight with words.

At least two people among the demonstrators, an adult woman and Racine-native National Guard veteran Jovantae Phifer, pleaded with protesters to refrain from violence.

After about 10 minutes of yelling from demonstrators and little reaction from officers, some people started throwing rocks and bricks from across the street. Fireworks were also launched in the direction of the officers. At about 1:40 a.m., officers started putting on gas masks.

“There’s a lot of irate people here right now,” Johnson confided to a Journal Times reporter after rocks started to be thrown.

Minutes later, tear gas was used to disperse the crowd.

Journal Times Reporter Adam Rogan was affected by the tear gas but was OK after the initial shock and returned to work Monday.

Vikas Modi, an employee at Liquor Depot, 1401 Washington Ave., said looters smashed a large front window of the store around 4 a.m. Modi said the looters were trying to leave with boxes of liquor when they were scared off by a passing sheriff’s squad.

Other than broken glass and repairing the window, the store was unscathed.

Cell phone carrier stores in Racine were also dealing with the aftermath of break-ins from early Monday morning.

Adham Awadalla, owner of Boost Mobile, 1957 Douglas Ave., said he received a call from police around 12:30 a.m. Monday morning alerting him that his store was broken into. He looked at security camera footage and found that about five to six men had thrown weights and large rocks into the glass windows and stolen every item in the store.

So far the damage and stolen items are estimated at a loss of $20,000, Awadalla said.

Awadalla also owns the Boost Mobile location at 2022 Lathrop Ave. Forty-five minutes after arriving at the Douglas Avenue store, he got another call alerting him the Lathrop Avenue location had been broken into as well. The second location had about the same costs in damage, costing Awadalla as much as $50,000 total for both stores.

However, he’s not planning on repairing the glass windows right away; he said he’s going to wait until the chaos is over.

“I think (the peaceful protesters) want to get the president out of office. But the ones (damaging property) in the streets, they’re not thinking about that. They’re just being ignorant,” he said. “Just any excuse to make problems, get stuff for free and take advantage of the situation to get their anger out. But it’s all just dirty games; it has nothing to do with George Floyd at all.”

A sales representative from Metro PCS who only identified herself as Sheila had similar comments. Metro PCS, 1639 Douglas Ave., was also broken into.

“I just think it’s gone too far,” she said. “This is not about George Floyd’s death. This is just a lot of people taking advantage of a sad and serious situation to commit criminal acts and try to justify it. I don’t justify it. Violence plus violence does not equal peace.”

Sheila, who is also a supervisor of the Metro PCS, said that at about 1:23 a.m. Monday morning, a group of young girls broke a front window at Metro PCS, entering the building. They wrestled with a cabinet and got it open, taking three iPhones. Everything else was untouched. They then broke a window on the front door, climbing out through that way.

Sheila said the damage costs are still being investigated and is unknown at this time. However, there are plans to repair the window damage as soon as possible. Police are conducting an investigation, she said.

“It’s just a next level of ignorance to damage your own city,” she said. “It’s a place where you gotta live and where you gotta shop at. These businesses are providing service to you. There’s really no explanation for it but ignorance.”

Rock through window at salon

Law enforcement in front of the Racine Police Department

A fist bump for a deputy

Yelling at the police

Pete Wicklund contributed to this report.

See video footage from early Monday morning and reporter Adam Rogan describes what it was like to get tear gassed.

More than 60 images from demonstrations in Racine on June 2, 2020

More than 200 protesters walked through the streets of Racine Monday, the second day of demonstrations in the city more than a week after Geor…

Boost Mobile, 1957 Douglas Ave., was broken into early Monday morning. Wooden boards take the place of where the glass was shattered.

Metro PCS, 1639 Douglas Ave., has its front doors open. One of the doors has shattered glass where the burglars exited the building.

The front window to the Metro PCS storefront is shown from the inside. The burglars broke into the store through this window at Metro PCS, 1639 Douglas Ave., early Monday morning.