KENOSHA — The criminal complaint charging 17-year-old Kyle Rittenhouse with two counts of first-degree intentional homicide and other crimes related to Tuesday's fatal shootings in Kenosha has been released.

Rittenhouse is accused of killing Anthony Huber, 26, of Silver Lake; and Joseph Rosenbaum, 36, of Kenosha. The Illinois teenager also faces felony charges of attempted first-degree intentional homicide and two charges of first-degree recklessly endangering safety, and a misdemeanor charge of possession of a dangerous weapon by a person under 18.

All felony charges came with "use of a dangerous weapon" modifier.

In both killings, video shows Rittenhouse being pursued before shots are fired. Although some claimed that Rosenbaum had thrown a weapon at Rittenhouse, the criminal complaint filed with the Kenosha County District Attorney states that he threw a plastic bag.

Video shows Huber attempting to strike Rittenhouse when Huber was shot in the chest.

According to a report of an autopsy, Huber's gunshot wound to his chest "perforated his heart, aorta, pulmonary artery and right lung."

As of Friday, Rittenhouse was still in custody in Illinois awaiting an extradition hearing.

One week prior to the shooting, Rittenhouse was also cited in Kenosha County for speeding on the freeway (20-24 mph over) and for driving without a valid license, according to online records. 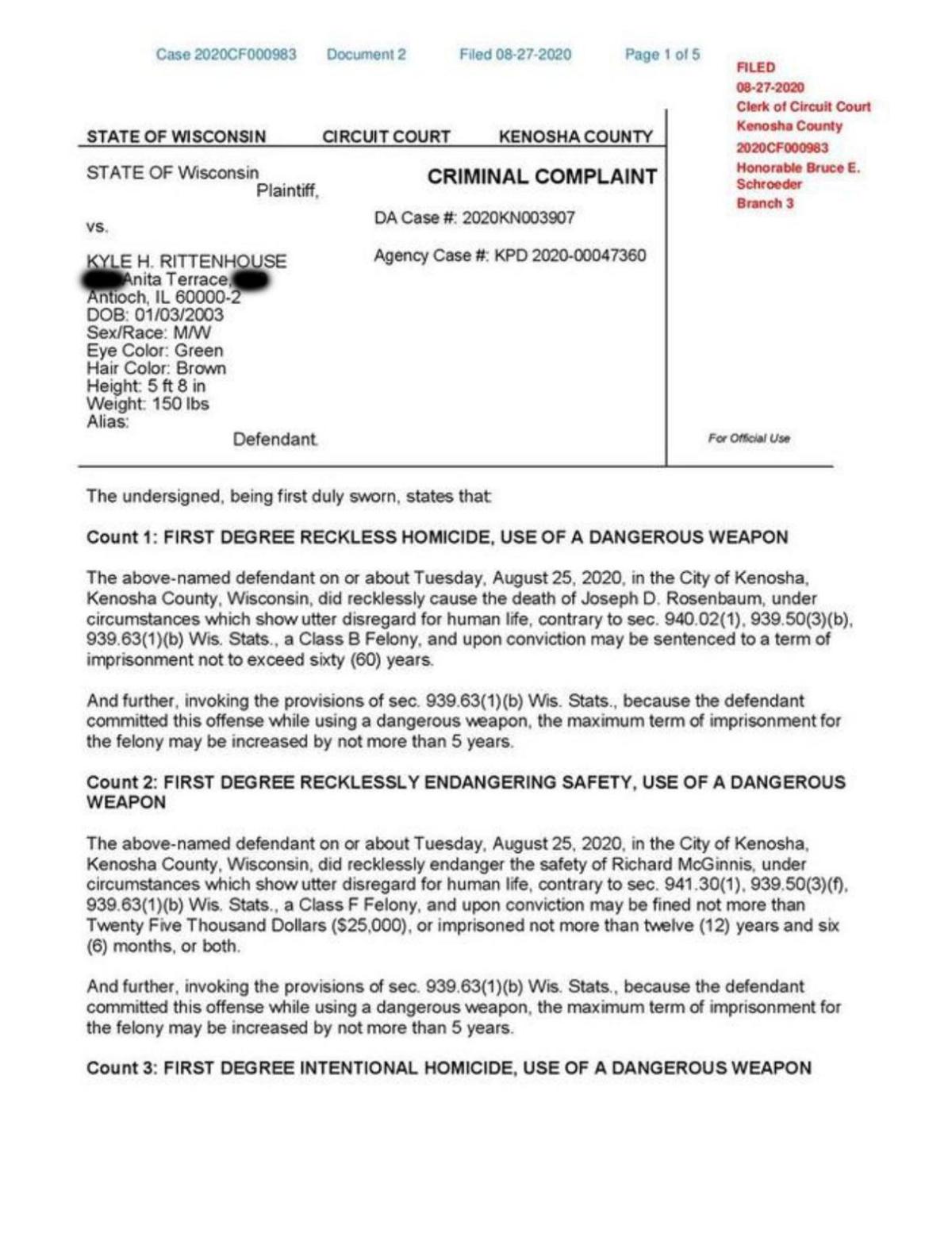 WATCH NOW: Bystander videos of the shootings in Kenosha

A group of armed individuals stands guard outside this gas station again tonight. They’ve been cooperative with the crowd as they come through, asking that they simply don’t destroy this property or loot #Kenosha #KenoshaProtests pic.twitter.com/mBShiUe0uD

'I work for that business'
'I'm watching'

This was the scene from on the ground reporter leading up to the shooting. Rioters were destroying cars. pic.twitter.com/MxL2y71JBh

Homeboy with the long gun was being chased by “Antifa” says streamer on the ground. He runs right into group destroying cars, he was being attacked as one of them throws something at him. My quick take. #KenoshaRiots #KenoshaUprising pic.twitter.com/Cpz3YTH90k

Warning Graphic ⚠️ Another POV of crazy shots letting off and a man down. #KenoshaRiot pic.twitter.com/m5iJW7Utt7

A chase, and a shooting

Pray for folks on the streets in Kenosha tonight. #KenoshaProtests #KenoshaRiot

In this video from @BGOnTheScene, protesters chase down a suspected shooter, but he manages to get some shots off. This is graphic. pic.twitter.com/hneaxaB7xV

Just spoke to a witness at the scene of the shooting in #Kenosha moments ago. pic.twitter.com/DZKjPULxOv

I interviewed the alleged shooter before the violence started.