Kyle Rittenhouse was observed drinking in a Mount Pleasant bar the afternoon of his Tuesday arraignment, with a photo taken at the bar that has been widely shared on social media, prompting Mount Pleasant Police to investigate whether he had violated conditions of his bond.

At the time, Rittenhouse was wearing a T-shirt that said “Free as (expletive)” and was with at least one of his parents, his mother.

Despite rumors, police reported they found no evidence that the teenager had violated his bond.

Rittenhouse, who turned 18 this week, is charged with homicide and attempted homicide for shooting three men, killing two, during protests in Kenosha in August. His bond was posted on Nov. 20 with $2 million raised by donors, his case drawing support from some conservative and gun rights groups.

According to a statement from the Mount Pleasant Police, the department received information Friday that there was video footage of Rittenhouse inside Pudgy’s Pub, 7800 Washington Ave. The caller was concerned that Rittenhouse was violating the conditions of his bond.

Police sent officers to the pub, checking video footage from Tuesday and found Rittenhouse was at the bar with a parent from about 2:25 to 4:25 p.m. that day. Rittenhouse had his arraignment, during which he formally entered a not guilty plea, at 1 p.m. that day. He appeared at the hearing virtually from the office of his Racine-based defense attorney, Mark Richards.

A former University of Wisconsin-Parkside student posted a photo of Rittenhouse at the bar on Facebook, saying “Kyle Rittenhouse sure is living the free life! Let this sink in....”

In comments, the man said he had taken the photo; he later said he was not the one who took the photo although he was at the tavern when the photo was taken.

By Friday afternoon, the photo had been shared more than 1,500 times and the image also was circulating on other sites, including Twitter. Hundreds commented, some praising Rittenhouse and saying the shootings were justified; others were outraged.

The Journal Times has requested the video Mount Pleasant Police referenced. The video had not yet been provided as of press time Friday.

Another photograph shared with The Journal Times shows Rittenhouse standing with his mother, Wendy Rittenhouse, in the bar. Each appear to be holding a beer bottle; Rittenhouse appears to be drinking a Coors Light.

Under Wisconsin law, those who are underage can legally drink at taverns if they are with a parent or guardian.

Regarding concerns about Rittenhouse having broken his bond conditions, Lt. Scott Geyer of the Mount Pleasant Police Department stated: “Contact was made with the Kenosha County District Attorney’s Office, and after explaining the situation, his actions and presence in the establishment did not constitute a violation of his bond agreement.”

When a judge or court commissioner sets bond, it includes conditions that include committing no further crimes. In Rittenhouse’s case, it included conditions that he not possess weapons and a list of people with whom he is not allowed to have contact, including the man who survived the shooting and the families of those who died, and certain witnesses in the case. A person who violates bond conditions is subject to arrest for bond jumping, another felony, and could have bond revoked.

Although the Rittenhouse family lives in Antioch, Ill., they are reportedly staying in Wisconsin since he was released on bond.

Rittenhouse and his attorneys maintain Rittenhouse was acting in self defense.

He is next expected to appear in court March 10.

More than 120 photos from Aug. 25 protest in Kenosha, from peaceful speeches to deadly end

More than 120 photos from Aug. 25 protest in Kenosha, from peaceful speeches to deadly end 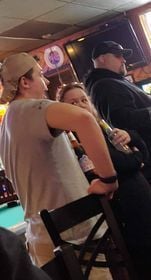 Kyle Rittenhouse, 18, is pictured here with his mother, Wendy Rittenhouse, Tuesday afternoon at Pudgy's Pub, 7800 Washington Ave., Mount Pleasant. Both appear to be holding beer bottles. In Wisconsin, it is legal for teenagers to drink in a tavern so long as they are with a parent or guardian. 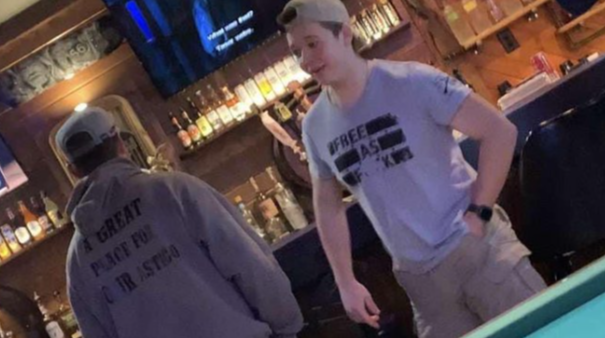