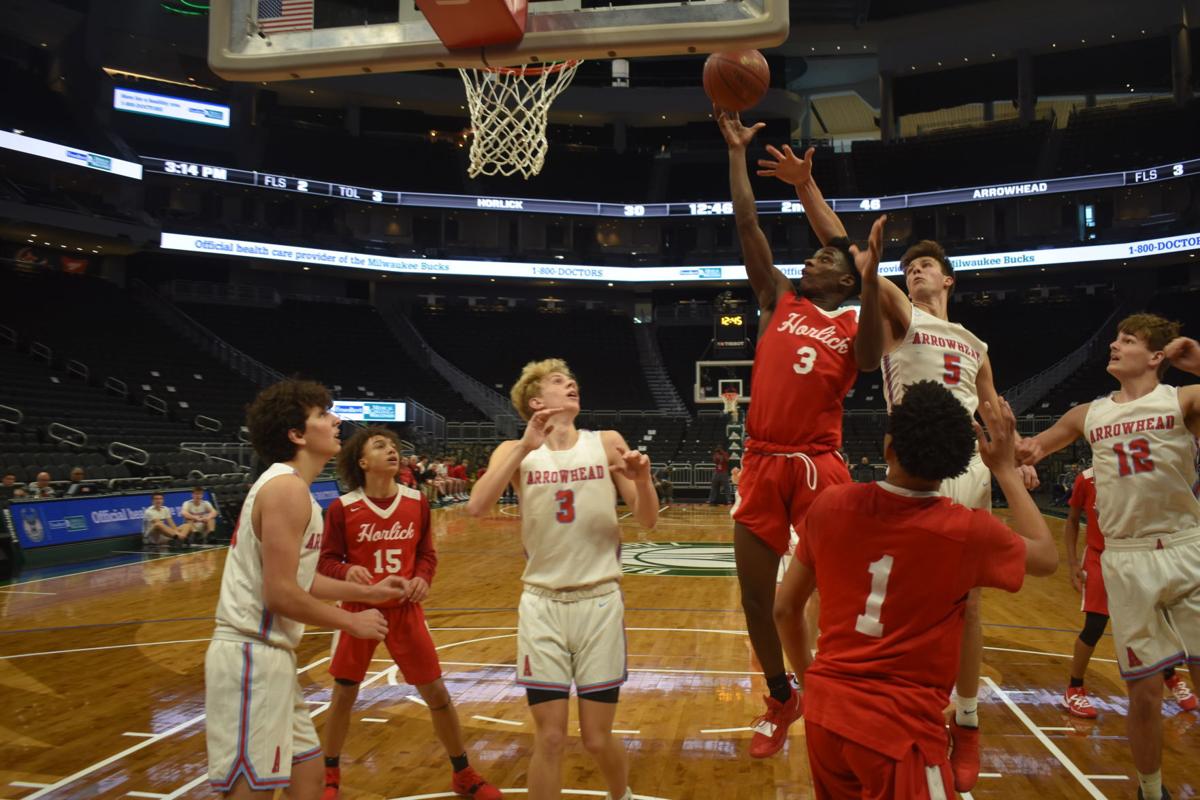 Horlick High School senior Patrick Wade shoots a layup against the Arrowhead Warhawks on Friday. The Rebels lost to the Warhawks 73-51 in a nonconference game at the Fiserv Forum, home of the Milwaukee Bucks. The game was part of the Bucks Prep Series, which is in its 30th year. 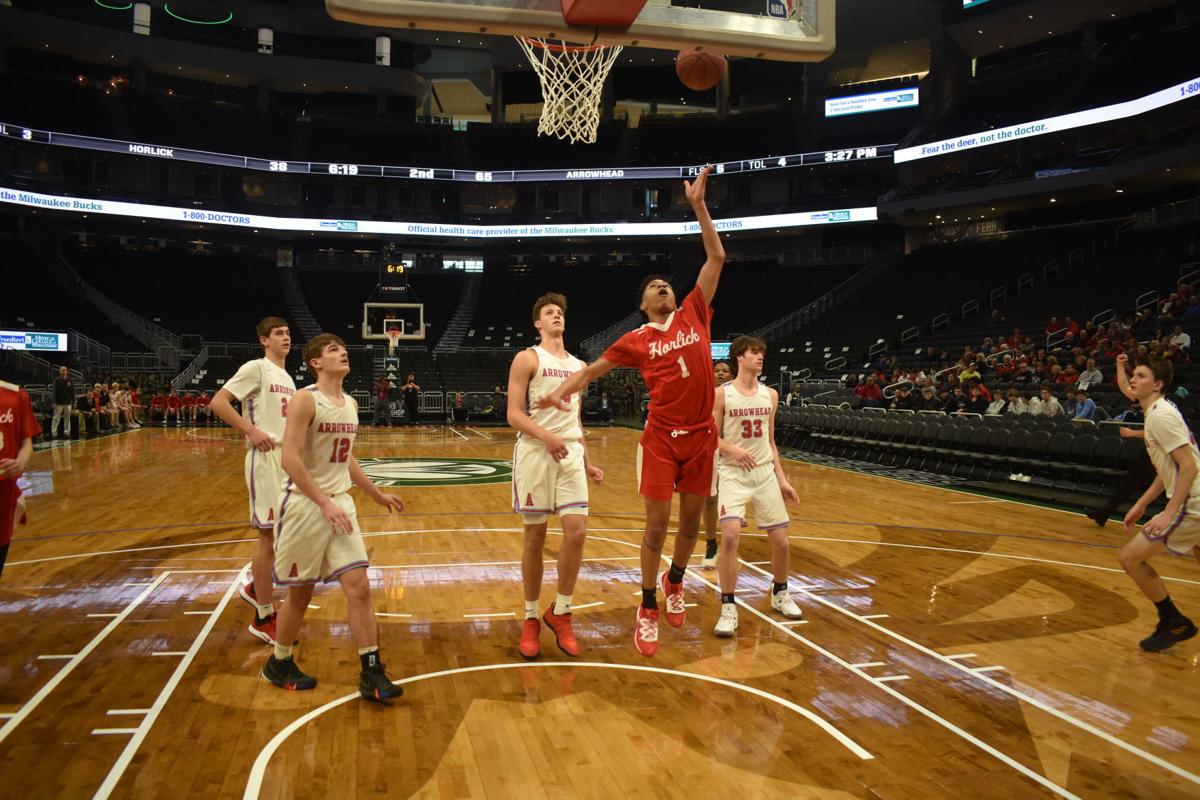 Horlick High School sophomore Dontrell Bush shoots a layup against Hartland Arrowhead on Friday. The Rebels lost to the Warhawks 73-51 at the Fiserv Forum, home of the Milwaukee Bucks. 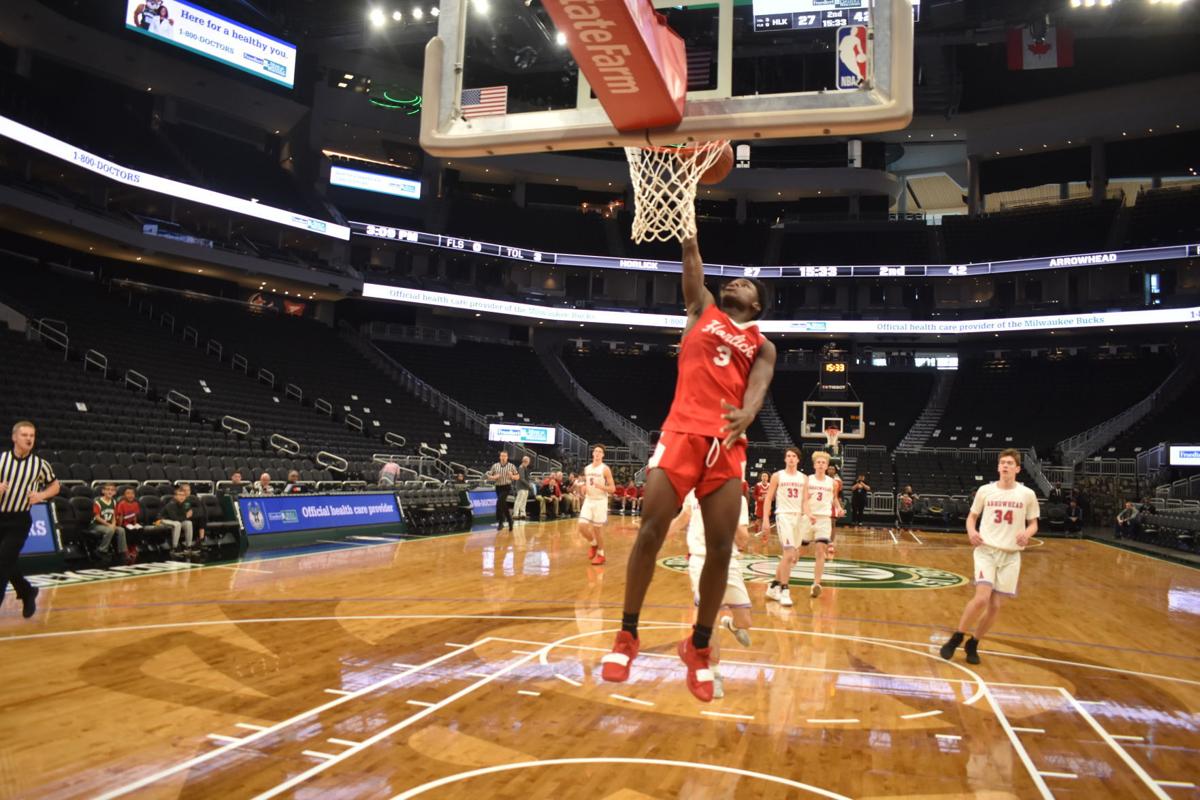 Horlick High School senior Patrick Wade gets an easy layup against Hartland Arrowhead on Friday. The Rebels lost to the Warhawks 73-51 at the Fiserv Forum, home of the Milwaukee Bucks.

MILWAUKEE — The Horlick High School Rebels have at least one thing in common with the Los Angeles Clippers — they both left the Fiserv Forum with a loss on Friday, but at least the Rebels put up a fight.

Hours before the tipoff between the Milwaukee Bucks and Clippers, the Horlick boys basketball team took the floor against the Arrowhead Warhawks from Hartland.

The game was part of the Milwaukee Bucks Prep Series, which is in its 30th year.

The Rebels ended up losing 73-51, and although they wanted to win, for probably the only time this season, winning wasn’t the point.

Before the game started, Horlick head coach Jason Treutelaar told his team everyone was going to have a chance to play on a real NBA court.

“It’s the most important thing, I think, in an experience like this,” Treutelaar said. “That’s why we were able to get everyone in during the first half. We made sure that was one of the goals for this game.”

Going up against the Warhawks and their star player Carter Gilmore, who plans to play for the University of Wisconsin Badgers next year, was not going to be easy.

“We were undersized but I thought our guys competed,” Treutelaar said. “I’m not disappointed, obviously we would’ve liked a different outcome but we learned a lot about our team and got a great experience.”

‘NBA player for a day’

When the team walked into the Fiserv Forum and began warming up, several players said there was a feeling of “I can’t believe I’m here.”

When asked how about the results of that warm-up shot, Bush simply said “it’s far.”

“I got to keep shooting and work my way back,” Bush said.

Sophomore Darrien Long noticed how much longer and wider an NBA court is compared to a high school court.

“It’s a longer court so there’s more running,” Long said. “You got to get used to it at first, but once you get the hang of it, your adrenaline is going to be rushing.”

Each team got the full NBA experience and even got dressed in the locker room, just like the professionals would do a few hours after their game.

“It was beautiful,” Bush said of the locker room adding when he has children he’s going to tell them about this game. “I feel like an NBA player for a day.”

Treutelaar said several players logged quality minutes that he hopes will benefit the team later in the season and also logged special memories.

“When you get out there and see, from a special standpoint, the shooting background, it’s all different,” Treutelaar said. “But you get a chance to experience what guys like Khris Middleton, Giannis Antetokounmpo and all of those guys get to do on basically a daily basis and I think that’s great for our guys.”

The game was even special for the friends and family who were in the stands.

“He sent me a text message (Thursday) to say that he was playing here and asked me to come,” McCright said adding Burnette’s favorite sport is basketball. “He’s an athlete. He’s good at everything baseball, football, but basketball is his game.”

McCright said the Bucks letting the teams play on their floor is “a very generous gift.”

“It inspires the children,” McCright said. “I can’t believe the Bucks opened up their arena like this.”

Bush’s mother, Tamyra Morgan, said it was special watching her son and the other kids play and hopes this won’t be her last time to watch her son in a big arena.

“I was pretty excited to bring his brothers out to see him play out here in Milwaukee,” Morgan said. “It’s pretty surreal but anything is possible. This is pretty awesome.”

But if it is the last time to play on an NBA court, their memories of their sneakers squeaking will last longer than their memory of the score.

Horlick High School senior Patrick Wade shoots a layup against the Arrowhead Warhawks on Friday. The Rebels lost to the Warhawks 73-51 in a nonconference game at the Fiserv Forum, home of the Milwaukee Bucks. The game was part of the Bucks Prep Series, which is in its 30th year.

Horlick High School sophomore Dontrell Bush shoots a layup against Hartland Arrowhead on Friday. The Rebels lost to the Warhawks 73-51 at the Fiserv Forum, home of the Milwaukee Bucks.

Horlick High School senior Patrick Wade gets an easy layup against Hartland Arrowhead on Friday. The Rebels lost to the Warhawks 73-51 at the Fiserv Forum, home of the Milwaukee Bucks.