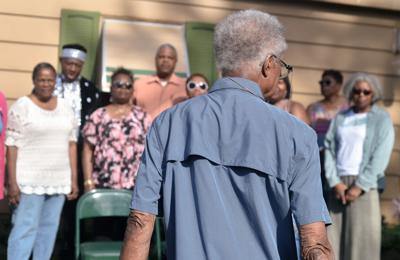 RACINE — In 1992, 21 former choir students of Andrew Duncan, who had been the choir teacher at Wendell Phillips High School in Chicago, gathered at the home Duncan shares with his wife, Carol, to surprise him with a reunion.

This reunion has happened every year, usually at the home of a student all-grown-up with one being held virtually over Zoom.

Now, 30 years later, as Duncan approaches his 90th birthday, the reunion returned to where it began: Haven Avenue.

Born the youngest of four children in 1932 in Aliquippa, Pennsylvania, Duncan learned to play music at a young age. In junior high, Duncan started playing the drums. Then his music teacher at the time moved him to the trombone.

After finishing high school, Duncan was drafted into the Army and was assigned to an Army Band. Upon leaving the Army, Duncan had to figure out what he was going to do with his life.

“When I got out, I wasn’t sure what I was going to do then, but I knew it was going to be in music,” Duncan said.

Duncan then moved to Chicago and stayed with his sisters. He started subbing to teach music in various schools around the city.

“That was a scene,” Duncan said. “Most of the time I got sent to schools that had bad kids in them. They were so bad they had guards sitting outside the door of the classroom.”

In 1958, Duncan was chosen to become the full-time music teacher for Wendell Phillips High School. That’s where his journey really began.

Duncan initially had trouble when he first began teaching full-time. Mainly because he couldn’t play the piano. But Duncan always compensated by finding a student to play the piano for him.

Under Duncan’s tutelage, the Wendell Phillips choir would travel all over the country — one time even going to Europe — and became the first choice for Chicago Mayor Richard J. Daley when Daley needed a choir to perform for an event; there were times when Duncan had to turn down Daley because the choir was too busy.

Both Andrew and Carol Duncan described Wendell Phillips as being in the “Heart of the Ghetto.” At the school, Mr. Duncan commanded respect.

“I always said to them (the students), ‘I’m going treat you alright, I’m going to treat you with respect, and I demand that you treat me with respect,’ and they did,” Duncan said. “I also told them, ‘if I see you laying in a gutter, high or drunk, I’m gonna leave you there’, I don’t want anything like that,” Duncan said.

Duncan recounted one of his stories of a trip to Fargo, North Dakota. A student in his choir became belligerent towards him and Duncan threatened to call his parents and have him on the next train back to Chicago. The student immediately turned his attitude around, Duncan recalled.

Racine Unified School District scouted Duncan to become the music director for all the schools in 1974. He left his job at Wendell Phillips, as well as a position teaching music at Roosevelt University in Chicago he had for two years.

For 20 years, from 1974 to 1994, Duncan oversaw more than 50 music teachers from all elementary, middle and high schools in RUSD; he was the only person to ever have the role. He also helped run various music festivals during his time at RUSD.

Carol recalled one of the festivals Duncan put together in the 1980s being a surprise hit. “He was so nervous when he decided to start the festival over again,” she said. “He was so nervous about this and he said ‘I don’t know how many people are going to come’ and I’ll tell you how many people came. They had to get the police to do the traffic on Washington Avenue. It was backed for miles with people coming to the festival. It was standing room only in the gymnasium.”

Duncan was relived from duty at RUSD two years before he originally planned, his position being phased out in 1994.

The third Saturday in August

“The choir always told me ‘Mrs. Duncan, your husband didn’t teach only music, he also taught us life,’ and I thought that was so unique to say. They just love him,” Carol said.

The reunions began 30 years ago with a phone call between Carol and a couple of Duncan’s old choir students. While they had always kept in touch with him, the 21 of his students wanted to surprise him, assuring Carol that they would bring all the food and anything that would be needed to bring. Since the original date of Aug. 22, 1992, the reunion has always fallen on the third Saturday of August, even when the pandemic caused the meetings to be over Zoom.

The Duncans had always maintained a good relationship with Duncan’s former students, who they still affectionately call “kids” despite their median age now being over 60. Duncan recalled a time when he found out one of his former lead soloists was turning 70, and how shocked he was at the revelation.

“Am I that old?” Duncan said through laughs. “Yes, you are,” Carol added.

“It’s just been an awesome thing between a director and a choir, and Andrew considers them family,” Carol told a reporter during Saturday’s 30th reunion. “He told me that if he dies on a Saturday or Sunday, I have to hold his body over until the next Saturday so all the kids can come to his funeral. They are all special special people.”

It’s also customary that every student that attends the reunion to sing at the end, with Andrew of course in the conducting position.

“When he would take us places (concerts and festivals), it would keep us off the streets,” said Angelo LaGronge, a member of the choir from 1972 to 1973. “We were off the streets and doing something constructive.”

“Mr. Duncan,” said Michael Hill, a student of Duncan’s from 1971 to 1972, during a speech at the reunion, “you are the glue that keeps us all together.” Hill was met with many cheer and words of agreement after his words.

“I really joined the choir on a humbug, but I ended up really enjoying it,” said Trudy Hill, a student of Duncan’s from 1964 to 1965; one of Hill’s other teachers had promised extra credit if he participated in the music program.

“I was extremely shy growing up,” said Dr. Regina Conway-Phillips. “Even though I was really quiet and very very shy, he saw something in me. He saw a leadership ability in me, and that pushed me to be where I’m at today.” Conway-Phillips is now a professor in the nursing program at Loyola University in Chicago. But when she was in Duncan’s choir from 1967 to 1969, she was the manager for the choir.

“He’s quite the man, quite the music man,” Carol said, reflecting on the life and career of her husband. “Music has been his whole life.”

Andrew Duncan will turn 90 years old on Oct. 1. A big party at his church is being planned.

In photos and video: Andrew Duncan and his choir's 30th reunion

Always by each other's side

Watch now: Emily Guss discusses her time in the Wendell Phillips Choir, and her trip to Europe

It's time to sing

Raised just outside of Mchenry, Illinois, Alex is the business reporter and staff photographer for The Journal Times. He considers himself a Clark Kent and Jimmy Olsen all-in-one. Alex is a graduate of SIUC in Carbondale, Illinois. Twitter:@arodatjt

In a letter regarding the case, Racine County Sheriff Christopher Schmaling wrote “I have complete faith in our community and our court system that when all facts are presented and thoroughly reviewed, the court will conclude the quick and brave actions taken by Deputy Drewitz and K-9 was well within his training and experience and completely an appropriate use of force to stop a very dangerous and resistive suspect."

Referring to the body camera video, “I had to watch a person, a human being, lay on the ground, handcuffed, begging and pleading with a sworn officer whose job it is to protect and serve … to call the dog off,” said Kelly Scroggins-Powell, executive director of Racine Women for Racial Justice. “I watched him scream in pain as the dog tore into his leg.”

Taylor Wishau, a Racine County Board supervisor and member of the Burlington Area School Board, has agreed to pay $34,500 to settle a lawsuit filed by the founder of a local antiracism group.

Less than two months before Election Day, a Racine County Board member is stepping into the campaign for governor by criticizing incumbent Tony Evers over decisions of the state parole commission. The Burlington representative's attack on Evers comes as Republican gubernatorial challenger Tim Michels, who hopes to unseat the Democratic governor in November, is urging Evers to somehow stop all paroles of state inmates. 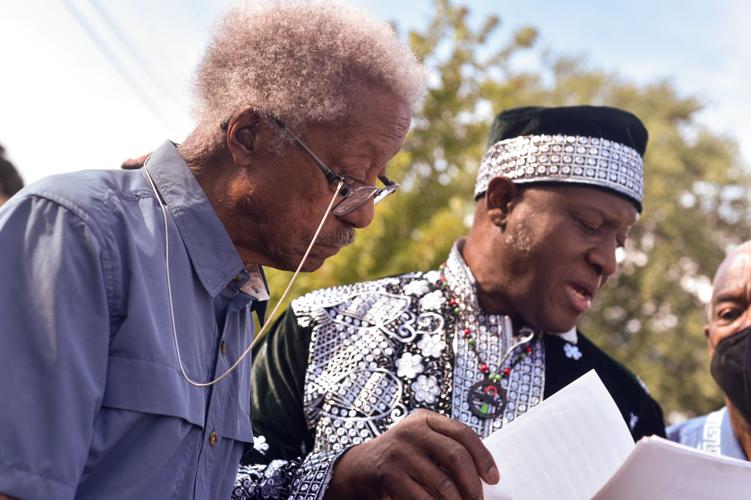 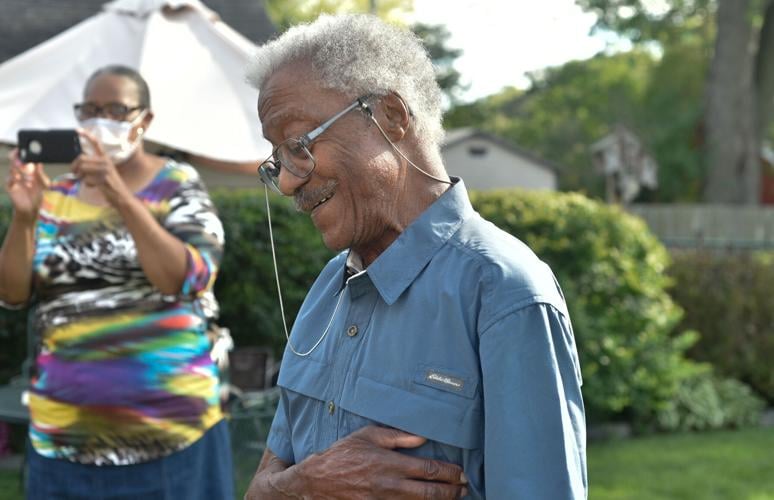 "I hope you all have a great rest of your lives," said Andrew Duncan in a speech during the 30th annual reunion of his choir. 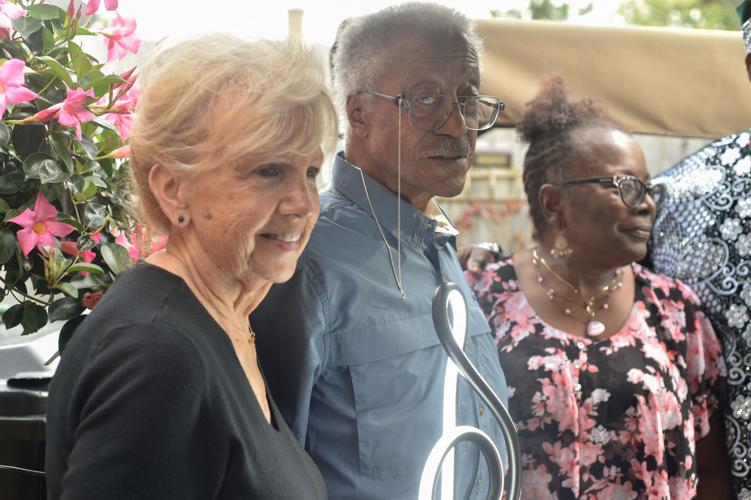 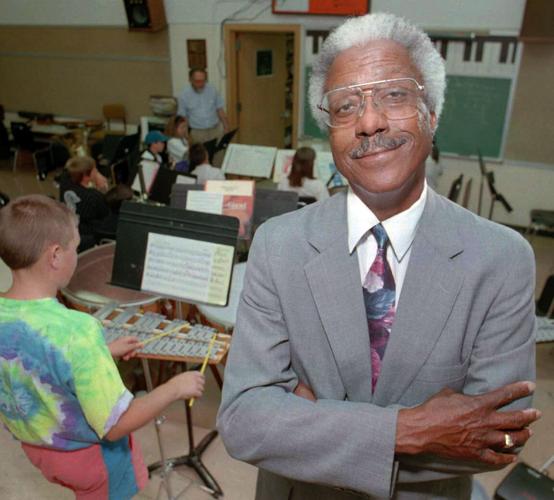 Andrew Duncan is shown here in 1994 as he was retiring as music director for Racine Unified after 20 years with the school district. 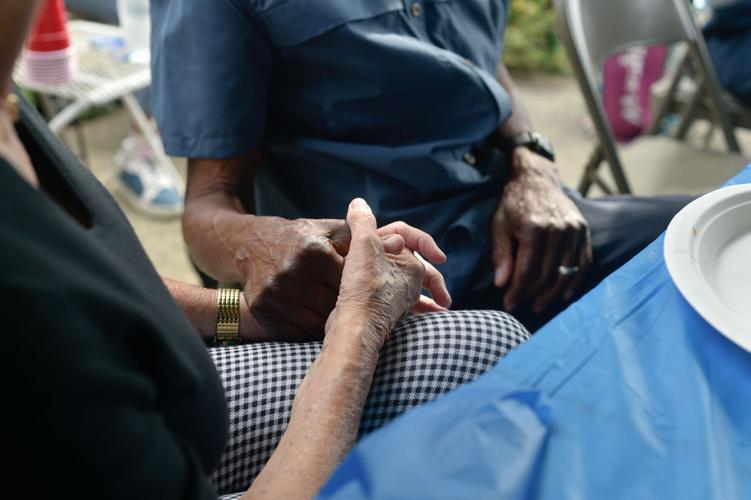