Dontrell Bush's mother, Tamyra Morgan, bows her head during a vigil honoring Bush, who was killed May 7.

RACINE — The mother of Dontrell “Trell” Bush was planning to move her family from Racine to California on May 19.

“But now, I’ve got to bury my baby on the 19th,” Tamyra Morgan, Bush’s mom, said Wednesday afternoon at a vigil organized by the Racine Interfaith Coalition a mere block from her home, near where her son was shot.

Bush, 17, was killed May 7 at a party on the 3400 block of Clairmont Street by someone his family says he had an ongoing disagreement with, a dispute that didn’t need to include violence. A suspect is in custody in the homicide.

“An argument, and a person is dead,” the Rev. Yeprem Kelegian said.

Joshua D. Daniel, an 18-year-old from Racine, has been charged for the murder.

Following her son’s death, Morgan made up her mind to stay in Racine, where Bush had lived since he was 12. She wants to spread love here, to combat the anger and injustice that led to her son’s unnecessary death.

“Love covers all,” added Morgan’s only brother, Le Ron Ball, who had helped raise each of Morgan’s five kids and had coached Bush in basketball at Horlick High School.

Rayshaun Everton, a cousin of Dontrell "Trell" Bush, carries a basketball covered in messages and signatures during a vigil honoring Bush on W…

“We have been doing these vigils for 25 years. They don’t get any easier,” Tamerin Hayward, RIC co-president, said at the vigil. “I was a high school teacher for more than 20 years. I saw so many kids go through my classes through the years … Any time one of them didn’t live that fulfilled life, we mourned for them.”

2020 was the deadliest year for gun violence in at least two decades in the U.S., according to Gun Violence Archive data, with 19,380 killed and almost 40,000 injured by gunfire. In 2016, the victims in nearly a third of all gun deaths and almost half of gun-related homicides were young people ages 15-29, the Center for American Progress reported.

“This is so unfair. No mother should have to bury their child,” Hayward continued, offering comfort to Morgan. “It just isn’t right.”

Rev. Yeprem Kelegian holds up a photo of the late Dontrell "Trell" Bush during a Racine Interfaith Coalition vigil on Wednesday afternoon.

RIC’s leaders know that these vigils are cathartic, but don’t directly bring about real change. As Kelegian put it: “There’s guns everywhere these days. People used to get so angry at each other and punch each other’s nose. But that doesn’t seem to happen so much these days.”

“Prayer without action is not prayer ... Something has got to happen,” Kelegian said. “We’ve got no control over gun control. But we have control over our community ... We have to change the society.”

For the shooting, Carl Fields, program manager at The Hospitality Center who is also a community organizer for Ex-incarcerated People Organizing after serving 16 years in Wisconsin’s prison system, blamed socioeconomic and racial factors that created anger in the community that surrounded the alleged shooter, Daniel. Likewise, Kelegian blamed anger that Daniel was never taught how to control. RIC Co-President Linda Boyle blamed how easy it is for young people to get guns.

All expressed grief and hope for change.

In prayer, Kelegian said “Use us to be ministers of love and mercy and goodness, and maybe — Lord — we will rub off on some young man that is angry and has got a gun. Maybe we can rub off, and save that person. But Lord right now we raise in prayer Dontrell ‘Trell’ Bush.”

At most services for young people slain, the life of the deceased is remembered. The accused killer’s name is rarely-if-ever mentioned; sympathy for them is just as rare.

That wasn’t the case Friday. Morgan, Ball and other speakers said that needs Daniel needs love.

“I’m going to try to touch every at risk, or whatever, child come my way,” Morgan said of her decision to stay in Racine. “Dontrell was loved ... I want to make sure everyone is loved ... The killer, he need love.”

Fields, wearing a hoodie with the words “Hope Dealer” in cursive across the chest, spoke against systems of oppression and poverty, and his desire to change them. He expressed hope that Morgan would take part in bringing about that change.

Of Bush, Fields said: “This little brother had a lot of potential. That potential can be actualized through how he brings us all together.”

Of Daniel, “We lost another little brother who is now ensnared in the system who had his own issue,” Fields said as Morgan nodded in agreement. “As hard as it is to say, those two lives are now connected.”

Fields continued: “We need to lift up the little brothers who don’t know any better,” referring to Daniel.

Before arriving at Wednesday’s vigil, Morgan said she spoke with a police investigator who told her that Daniel appeared to show “no remorse” for the murder he is accused of. A criminal complaint states that Daniel told police “that he is from West Chicago and that what he did was just normal behavior there.” Despite Chicago’s metro population being 72% of Los Angeles’s and 47% of New York City’s, Chicago recorded 774 homicides in 2020 compared to approximately 350 in L.A. and around 450 in N.Y.C., according to preliminary numbers.

Kelegian referred to the situation as “A devastation for two families.” Morgan has to bury her son. Daneil’s family will likely have to watch him spend the rest of his days in prison.

“An argument? And now a person is dead,” Kelegian said, almost in disbelief.

As the vigil closed and speakers expressed hope Racine’s summer to not grow to be more violent, Kelegian said “We’re going to sanctify the ground ... so that maybe the next death won’t happen so soon.” Fields led a chanting of Bush’s name, “Dontrell! Dontrell! Dontrell!” echoing through the usually quiet Georgetown neighborhood.

Ball was in shock when he got the phone call last week that his nephew was dead.

With his wife, Ball has spent the last 13 years of his live devoted to helping so-called “at risk” kids, having grown up as one of those kids himself; Ball leads the Underground Huddle nonprofit, works with students spending time in in-school suspension rooms, takes part in Youth For Christ groups. And now his beloved nephew has been killed because of the culture of violence Ball fought against.

Ball called for more aid and explicit help to go to parents to help them with child care, so that children in poor neighborhoods and from single-parent homes aren’t left alone so often. “We have to have more opportunities for the parents so they have enough to provide so that the kids can do what they want to do.”

Expanded access to child care has long been looked at as a possible salve for violence among youth.

“When parents are unable to find child care, their ability to work and provide for their family suffers. Given the expense and scarcity of child care — especially for infants and toddlers — it’s no surprise that parents’ debt increases significantly in the year following a child’s birth,” a Center for American Progress report states. “Temporarily staying home with one’s child may seem like an appealing option, but parents who leave the workforce to become full-time caregivers earn substantially less in benefits and retirement savings over their careers … With two-thirds of children having all available parents in the workforce, allowing the child care industry to flounder is simply not an option for families or the economy.”

Watch Now: “But now, I’ve got to bury my baby on the 19th,” Dontrell Bush's mom says at vigil for her slain son

Tamyra Morgan bows her head for her son

Comfort for a grieving mother

A moment of new friendship

Watch Now: Van A. Carson Sr. of the Racine Family YMCA leads a hymn at vigil for Dontrell "Trell" Bush

A hug from a friend

The life of Dontrell Bush, 17-year-old Horlick student-athlete killed in Racine, in photos

Dontrell Bush poses with his loved ones and a dog.

Dontrell Bush with his mom

Dontrell Bush's mother and brother outside the family home

Going for a block

This unknown detail about Stonehenge might blow your mind

This unknown detail about Stonehenge might blow your mind

Could a basketball league for grown-ups convince Racine to ‘Put The Guns Down’?

After one Racine rapper is killed, another wants to start an anti-gun violence basketball league.

By providing an organized, dedicated athletic outlet, the Put The Guns Down Basketball Association for men and women ages 17 and up could be “Something people can look forward to, watch the people come together,” Isaiah “Lul Icey” Lambert said. “It can be competitive, but it’s not ‘In The Streets’ competitive, y’know.” 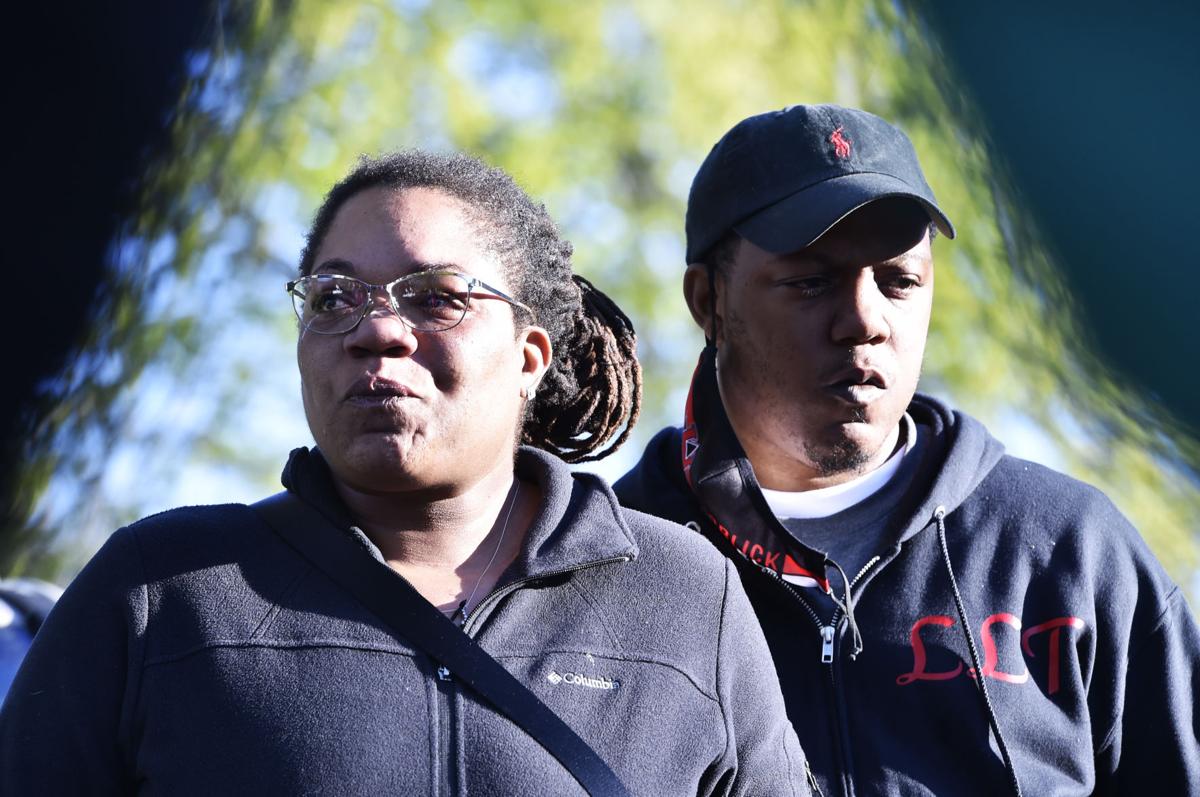 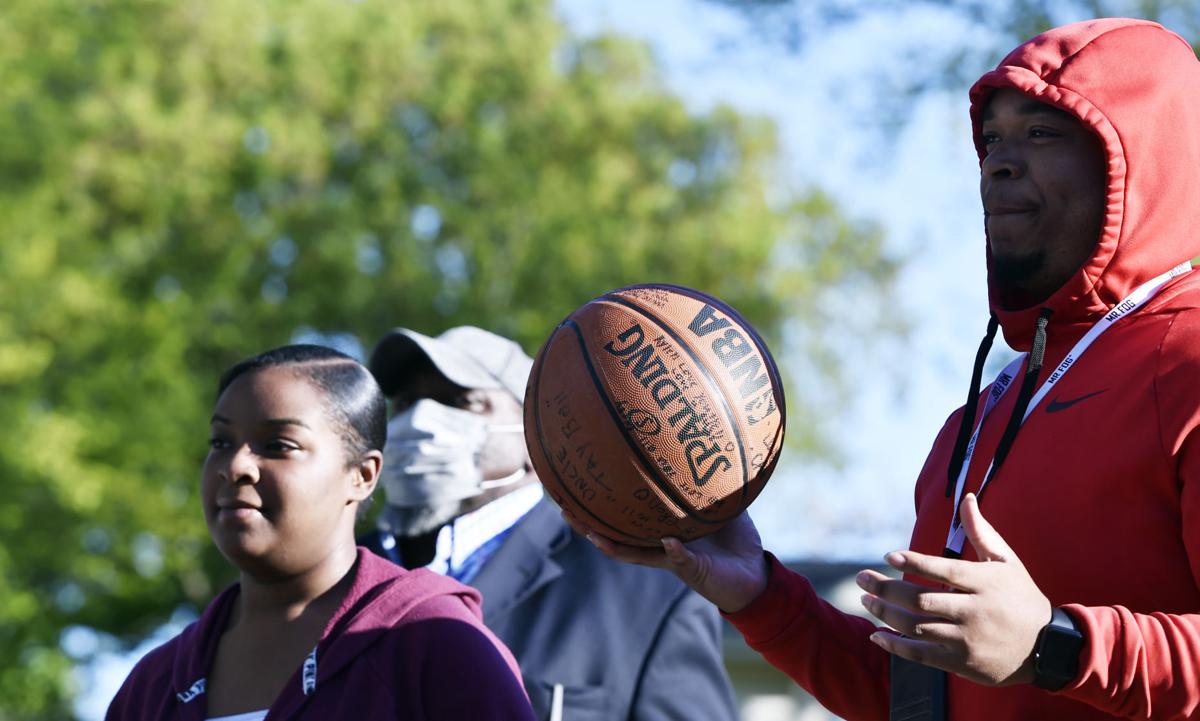 Rayshaun Everton, a cousin of Dontrell "Trell" Bush, carries a basketball covered in messages and signatures during a vigil honoring Bush on Wednesday. 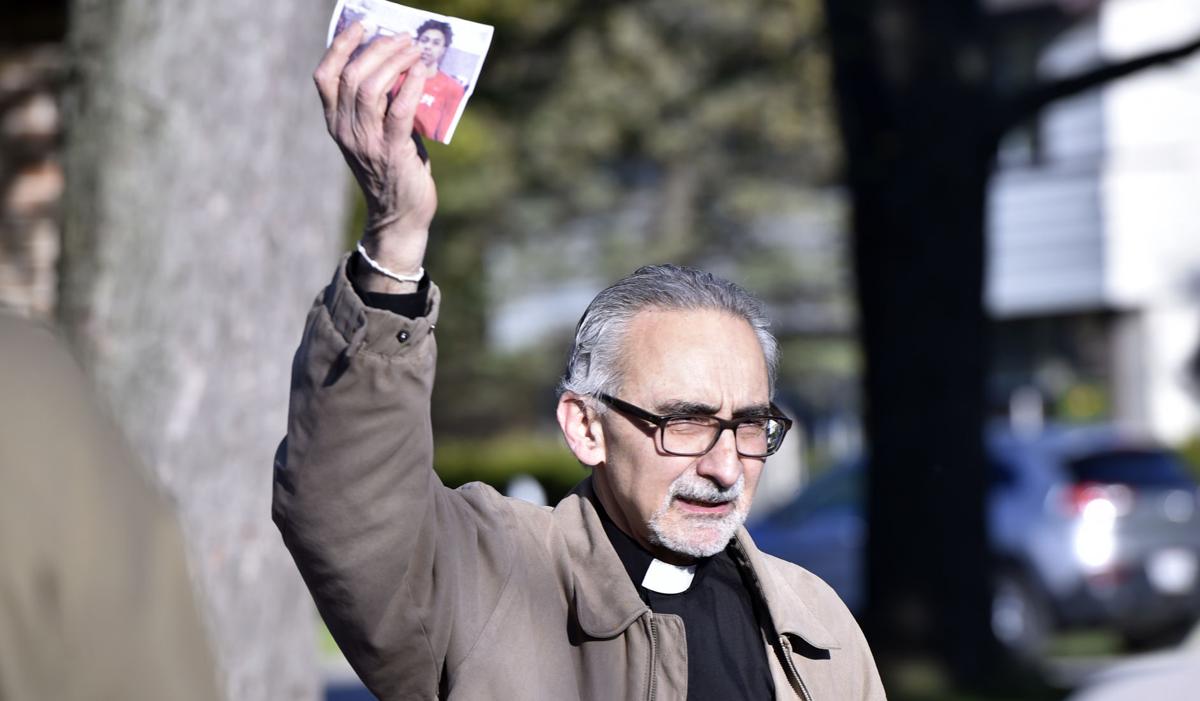 Rev. Yeprem Kelegian holds up a photo of the late Dontrell "Trell" Bush during a Racine Interfaith Coalition vigil on Wednesday afternoon. 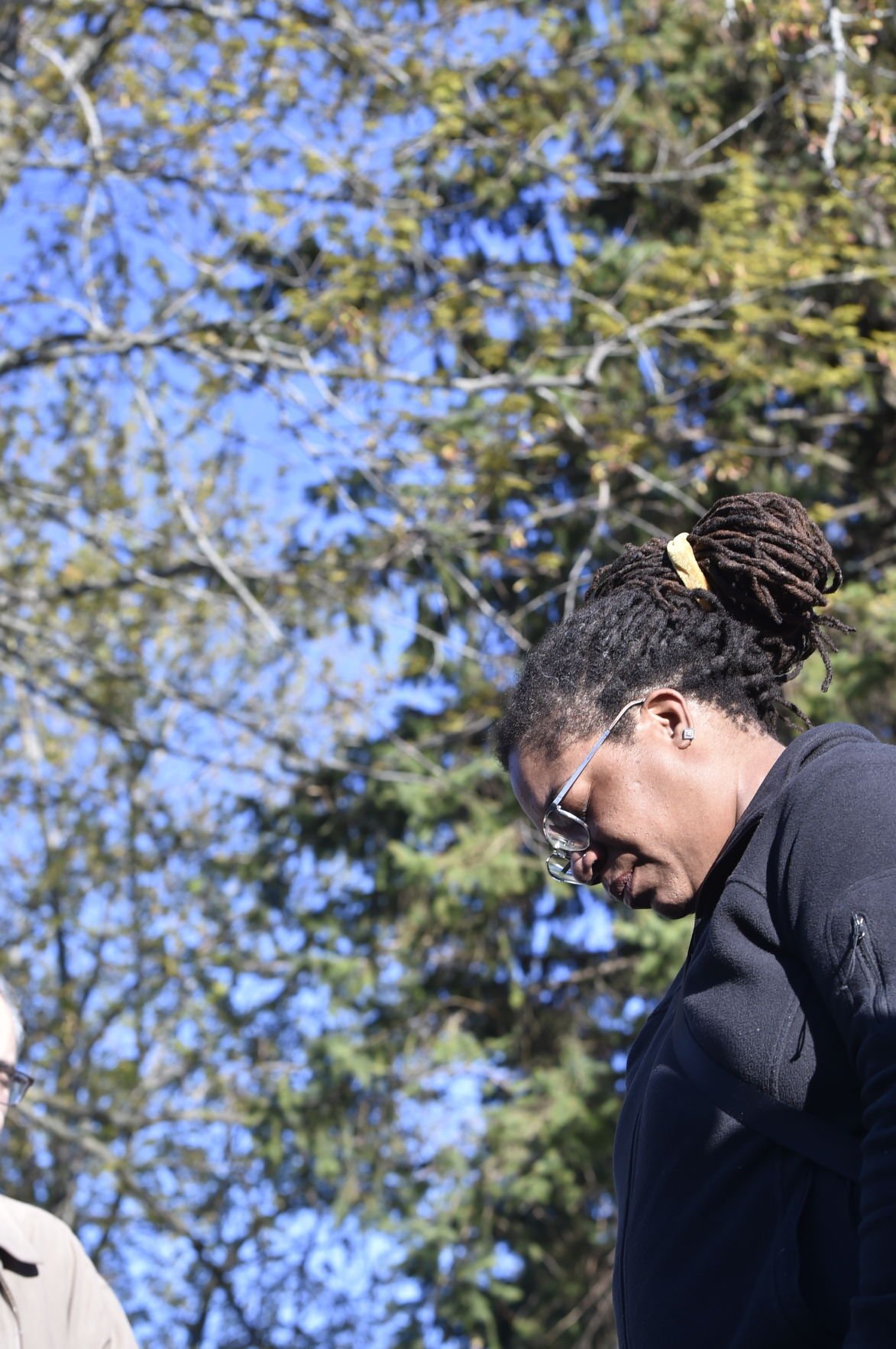 Dontrell Bush's mother, Tamyra Morgan, bows her head during a vigil honoring Bush, who was killed May 7. 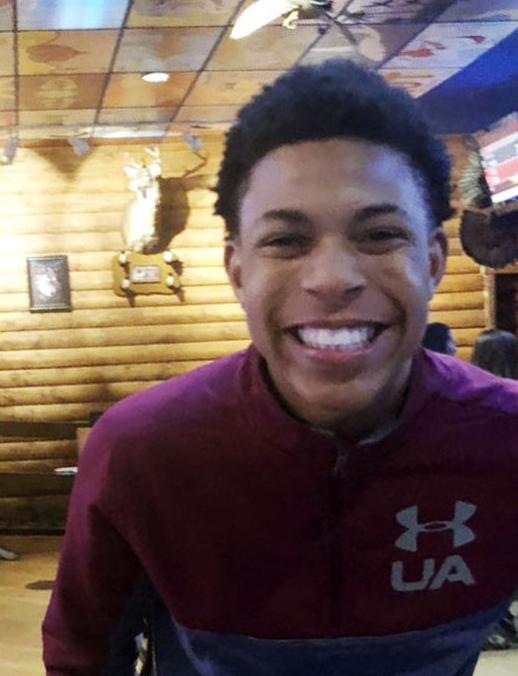