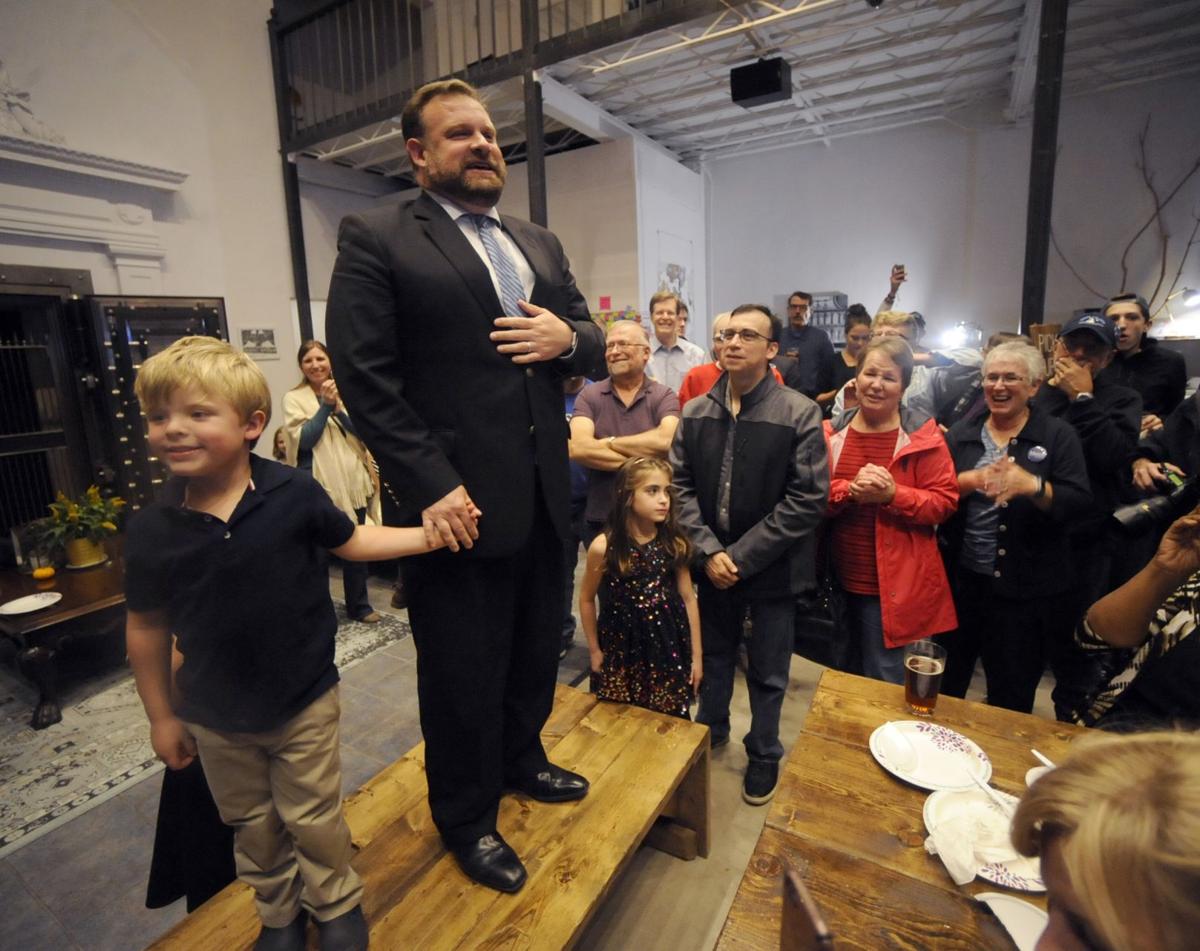 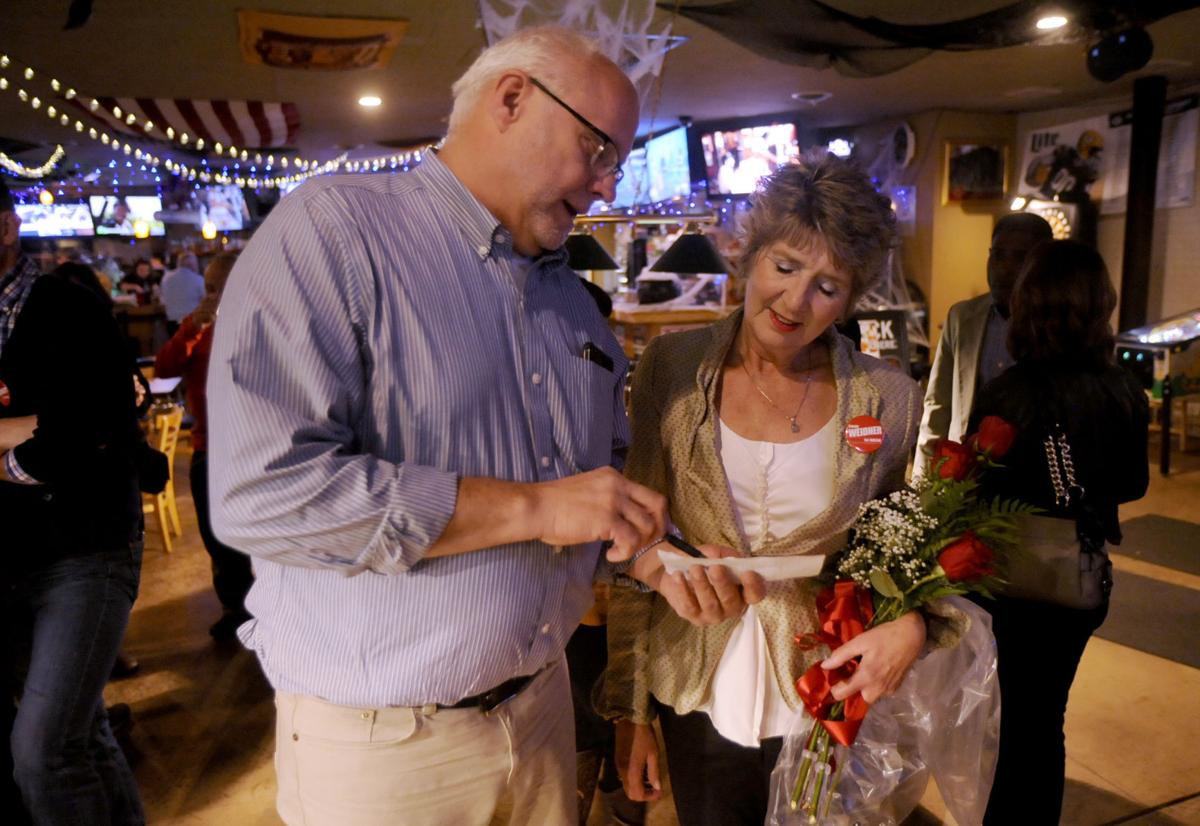 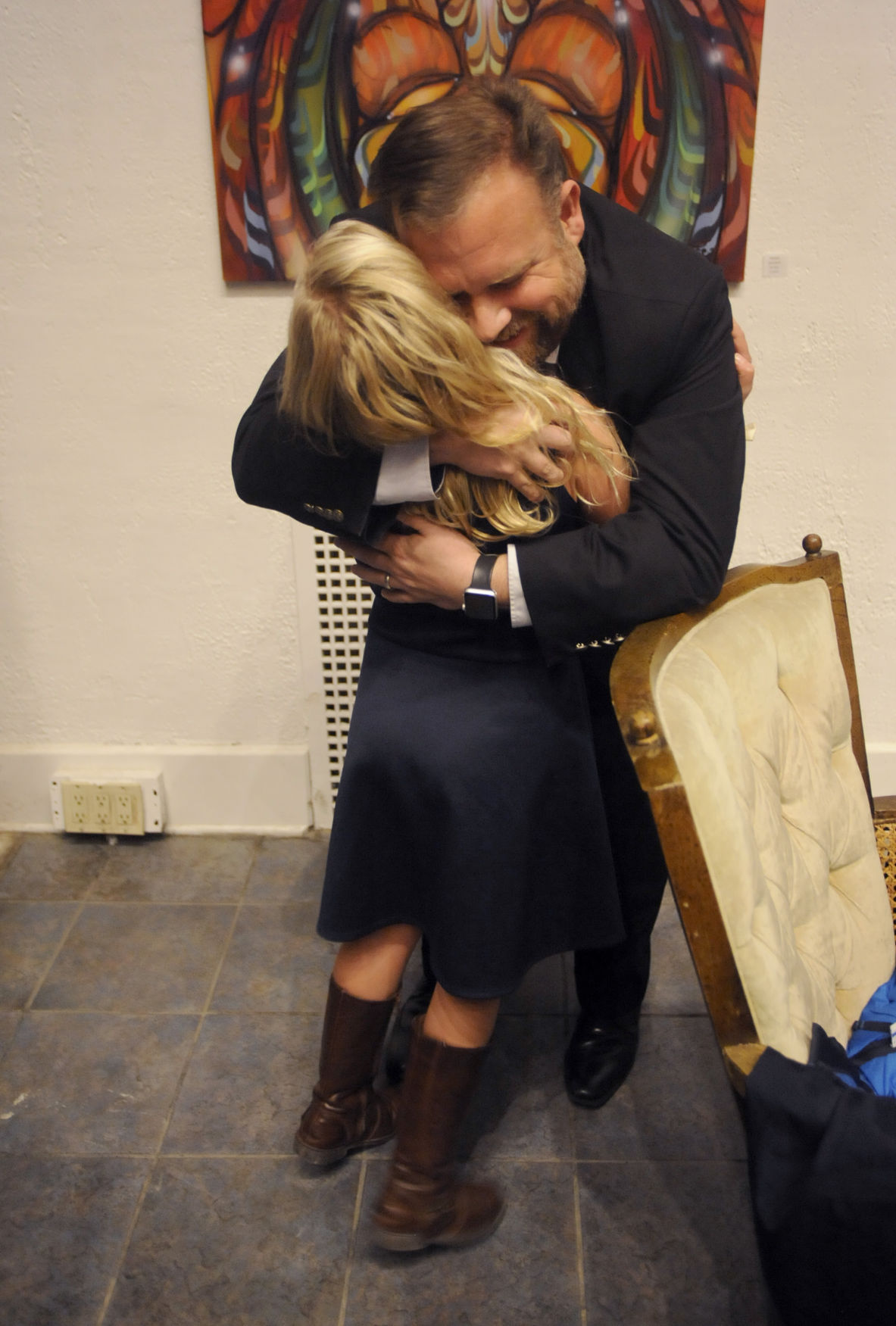 State Rep. Cory Mason hugs his daughter, Eleanor Roosevelt Mason, as he celebrates being elected to mayor of the City of Racine over 6th District Alderman Sandy Weidner Tuesday evening with his family and supporters at The Branch in Uptown. 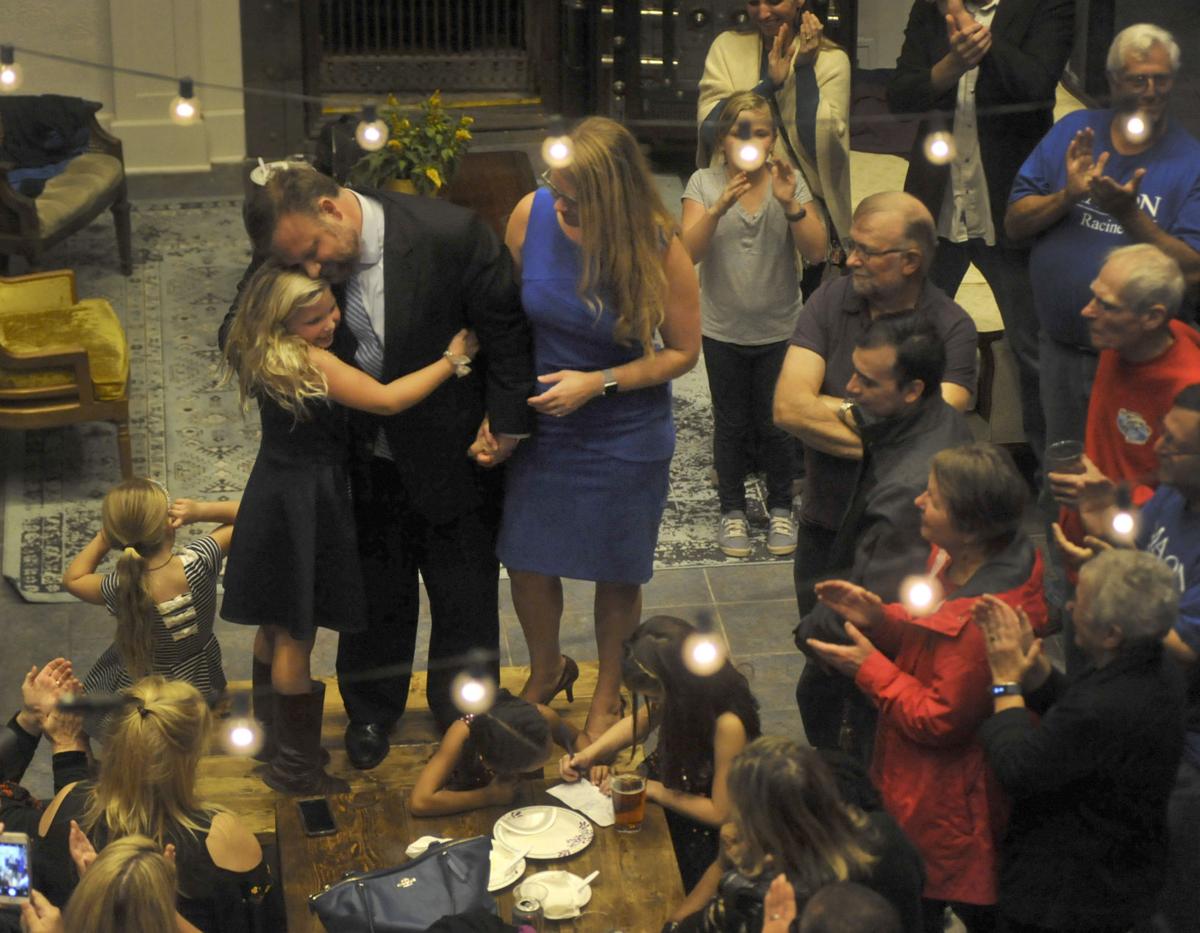 State Rep. Cory Mason hugs his daughter, Eleanor Roosevelt Mason, as he celebrates being elected to mayor of the City of Racine over 6th District Alderman Sandy Weidner on Oct. 17, 2017, with his family and supporters at The Branch in Uptown. Mason will serve out the remaining 18 months of former Mayor John Dickert’s term. 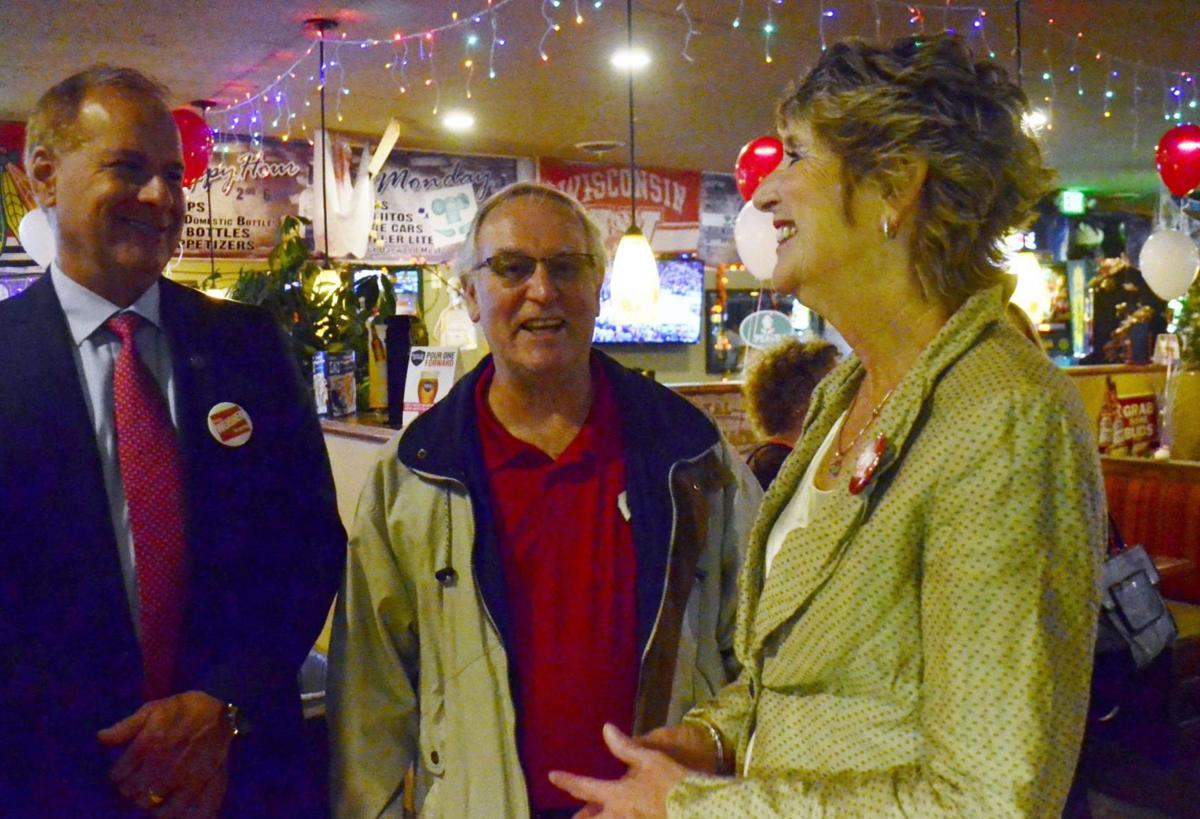 Sandy Weidner talks with supporters at Pepi's Pub and Grill, 618 6th St., after conceding the mayoral race to Cory Mason on Tuesday.

RACINE — After more than 10 years representing Racine in the Legislature, state Rep. Cory Mason will spend at least the next 18 months leading the city as its mayor.

With all wards reporting, unofficial results showed Mason with 5,356 votes, putting him 964 votes ahead of his opponent, 6th District Alderman Sandy Weidner, who tallied 4,392 votes. At one point, unofficial results indicated that a write-in candidate, Lee A. McGlorn, had received 28 votes.

Mason said Tuesday night that he was excited that voters had elected him to be the city’s next mayor.

“I’m really excited about moving the city forward and really doing the things that we talked about on the campaign; really rebuilding that middle class and getting people ready for the opportunities that are coming to the area,” Mason said after thanking supporters gathered at The Branch, 1501 Washington Ave., in Uptown.

Weidner, who was with supporters at Pepi’s Pub and Grill, 618 Sixth St., said she was disappointed with the outcome.

“I don’t think it’s a matter of not resonating with the voters, because I know we did,” Weidner told supporters. “We brought the issues out.”

She added that she would not be running for mayor again, nor would she run for re-election to her aldermanic seat, which is up for grabs in April.

“I made up my mind that I was either going to step up or step away, because you can only beat your head on the wall for so long,” she said.

Tuesday’s election was called by the City Council in August, after former Mayor John Dickert’s July departure. Dickert, who announced his pending resignation in March, left to take a position as president and CEO of the Great Lakes and St. Lawrence Cities Initiative.

Six candidates submitted nominating papers to run for the post. The field of candidates was narrowed to Weidner and Mason following the Sept. 19 primary. Former School Board President Melvin Hargrove, pastor at Zoe Outreach Ministries, 2130 Racine St., who ran for mayor in 2015, was the third highest vote-getter in the contest.

Mason was the first candidate to throw his hat into the ring for the seat, announcing his intentions at the same news conference at which Dickert announced his pending resignation.

After the March news conference Mason, who has represented Racine in the state Assembly since 2006, said he thought he could serve the city better as its mayor.

“I’ve been in the Legislature for 11 years, two in the majority and nine in the minority, and I can tell you that the amount that you’re able to accomplish is limited,” he said, noting that he planned to resign his Assembly seat should he be elected mayor.

A longtime Democrat, Mason emerged early as a front-runner in the race, running on his experience in government and his desire to galvanize job growth and address poverty.

His fundraising totals dwarfed those of his opponents. In September alone, his campaign spent more than $38,000 on consultants.

Weidner, who officially announced her candidacy in July, chiefly ran on her opposition to the proposed arena project, while also focusing on such bread-and-butter issues as neighborhood improvement, small business support, and the maintaining of city services.

Having established a reputation for challenging the Dickert administration, some of her biggest supporters were critics of City Hall.

In many ways, the race centered on the Dickert administration’s pursuit of lofty development projects, chiefly the ill-fated Machinery Row riverfront redevelopment endeavor and the proposed lakefront arena and hotel complex.

Both Weidner and Mason expressed opposition to the arena.

In her concession speech, Weidner said that one thing she felt she had accomplished was putting Mason “in a position where he had to say what he was going to do about the event center.”

“Hopefully the voters will keep their aldermen and the city staff accountable regarding their feelings on the event center,” she said.

Mason will serve out Dickert’s term in office. He’ll have the option to run for re-election in April 2019.

As he prepares for his new role, the City Council and interim Mayor Dennis Wiser — the 10th District alderman who was appointed to the post after Dickert’s resignation — are busy working on the city’s 2018 budget. The spending plan earmarks funds for the $55 million arena and the demolition of the Machinery Row buildings.

The budget is slated to be adopted by the City Council on Nov. 7, the same day Mason takes office.

In the coming weeks, Mason said he plans to have a lot of conversations with City Council members as well community members about what his administration hopes to accomplish.

“There’s a lot of work to do to prepare for the job,” he said.

No opponents to run against Mayor Mason and County Executive Delagrave

RACINE COUNTY — Racine Mayor Cory Mason and County Executive Jonathan Delagrave will both be unopposed on the April ballot.

His 'hardest, best job': Mayor Mason looks back at first year in office

Weidner to run as write-in for mayor

RACINE — Alderman Sandy Weidner is in the process of registering as a write-in candidate for mayor against current Mayor Cory Mason.

State Rep. Cory Mason hugs his daughter, Eleanor Roosevelt Mason, as he celebrates being elected to mayor of the City of Racine over 6th District Alderman Sandy Weidner Tuesday evening with his family and supporters at The Branch in Uptown.

State Rep. Cory Mason hugs his daughter, Eleanor Roosevelt Mason, as he celebrates being elected to mayor of the City of Racine over 6th District Alderman Sandy Weidner on Oct. 17, 2017, with his family and supporters at The Branch in Uptown. Mason will serve out the remaining 18 months of former Mayor John Dickert’s term.

Sandy Weidner talks with supporters at Pepi's Pub and Grill, 618 6th St., after conceding the mayoral race to Cory Mason on Tuesday.