RACINE — The man charged in connection to the death of his infant son has been found guilty of a lesser-included charge.

Second-degree reckless homicide means the defendant acted recklessly and as a result caused the death of another person.

He had originally been charged with first-degree reckless homicide, which, in contrast, would have meant the defendant acted with utter disregard to human life.

The Racine County District Attorney’s Office alleged Marquez shook the baby, which caused internal damage to the brain that led to the death of A.H., the defendant’s son.

The Wisconsin Public Defender’s Office argued the internal injuries stemmed from an infection on the brain, possibly meningitis.

Marquez was also convicted of bail jumping and possession of marijuana as a second offense.

A jury deliberated for about three hours Thursday before returning with a verdict.

Marquez is accused of shaking his son, causing damage to the baby’s brain that led to his death. He was caring for his son while the baby’s mother was out for the day on Feb. 22, 2019.

Shortly before 3 p.m., he called the baby’s mother to say the infant was not breathing. She called 911.

Officers from the Racine Police Department were dispatched to the duplex where the baby lived with his mother.

At the door, they were met by Marquez, who handed over A.H. The officers began infant CPR until paramedics arrived and took over.

Paramedics intubated the baby but, according to courtroom testimony, the tube was placed incorrectly, so oxygen was actually pushed into his stomach, not his lungs.

The infant underwent 45 minutes of CPR.

A.H. was taken first to Ascension All-Saints Hospital and then transferred to Children’s Hospital of Wisconsin in Wauwatosa.

Two tests confirm A.H. was brain-dead. He was kept alive on life support until his organs could be donated.

There is no debate among the many doctors who testified that A.H. died when the oxygen to his brain was hindered for enough time that cardiac arrest ensued.

Referred to as “the triad,” the three injuries most associated with abusive head trauma are swelling of the brain, subdural hematoma (blood building up on the surface of the brain), and bleeding in the retinas of the eyes.

However, the defense argued there were other causes associated these symptoms, and the medical investigators did not go far enough in their testing to confirm that shaking may not have been what caused A.H.’s death.

The first doctor to examine baby A.H. at Ascension Hospital found minimal subdural hematoma (blood building up on the surface of the brain) and little bleeding in the retinas of the eyes, the defense noted, meaning those symptoms probably occurred later.

Diane Donohoo, an assistant district attorney, presented evidence the baby’s injuries stemmed from shaken baby syndrome, or as the doctors referred to it, abusive head trauma.

She reminded the jury of what the doctors from Wisconsin Children’s Hospital testified to: The pattern of retinal hemorrhaging, and the fact that it occurred in both eyes, was a strong indicator of abusive head trauma.

Further, the doctors are aware there could be more than one cause for the symptoms they were seeing, so they ran many tests to rule out any other cause.

The doctors drew blood and looked at the white blood count, which could increase if there is an infection, and ordered up an MRI and CT scan.

Of baby A.H. she said, “He deserved to be protected and taken care of — not shaken.”

Because marijuana was found in the house, and the house smelled of burnt marijuana, Donohoo alleged the defendant was stoned when he was supposed to be taking care of his infant son, which is a reckless act, as well.

Jason Sanders gave closing remarks for the defense by arguing it was a reasonable hypothesis that all of baby A.H.’s symptoms were just as likely caused by disease.

He went over the evidence that showed baby A.H. had underlying health issues at the time of his death.

The infant was born a little early and was in the 15th percentile on the growth chart at that time. He was born with a formula intolerance, had difficulty eating and dropped to the 6th percentile in size.

In January 2019, he developed a respiratory virus and had a persistent cough. At the time of his death, he was in the 1 percentile on the growth chart.

Sanders said the baby may have had a weakened immune system from his underlying health problems.

He reminded the jury of the statement made by Marquez to the police in the hours after the baby stopped breathing in which he described his son’s symptoms.

Marquez told police his son was fussy, hot and sweaty — so much so he had to have his clothes changed. The baby could not hold down formula, so his father had to change his clothes a second time.

A.H. finally fell asleep in his swing but woke up choking; Marquez used the word “choking” more than a dozen times to police. He also said the baby was throwing up violently, so much so formula came gushing out of his nose.

These are symptoms consistent with meningitis, an infection of the meninges.

Sanders took the time to refute the framing of the case by ADA Donohoo, who told the jury the defendant admitted to shaking the baby, and therefore should be found guilty.

However, Sanders argued that was not quite right. The taped interview showed Marquez saying the baby had already stopped breathing when he patted him on the back and chest — Marquez did not know infant CPR — before placing him on his knee and giving him a shake in an effort to revive him.

Specialists hired by the defense showed slides to illustrate the infection in A.H.’s brain, which was not visible to the naked eye, but could be seen when magnified.

The defense noted as soon as baby A.H. was transported to the hospital in Racine, he was put on antibiotics, which continued for four days, and therefore the infant might have had an infection at the time he stopped breathing.

He will remain in custody until that time without the ability to post bond.

In photos: National Night Out 2021

How low can you go?

"You take away a life, you shouldn't have a life. But, we can't control that. I'm just asking you please give him as much time as possible," said the grandmother of Arkaydin Howard, the infant who died nearly three years ago. 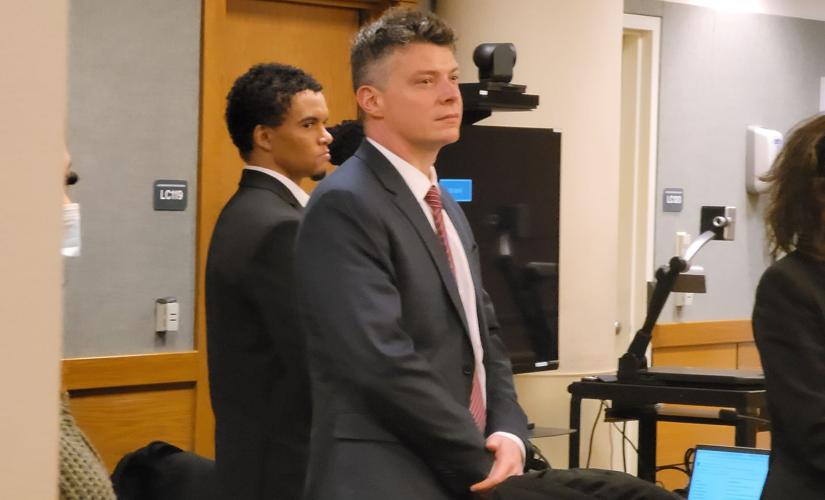 Jeremy Marquez, left, is shown with a member of his defense team, Jason Sanders, in Racine County Circuit Court during a trial that took nearly two weeks in which Marquez was found guilty of second-degree reckless homicide in the death of Marquez's infant son. 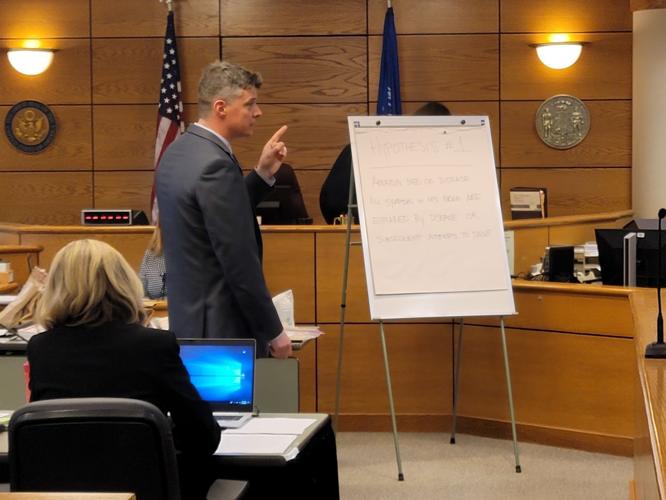 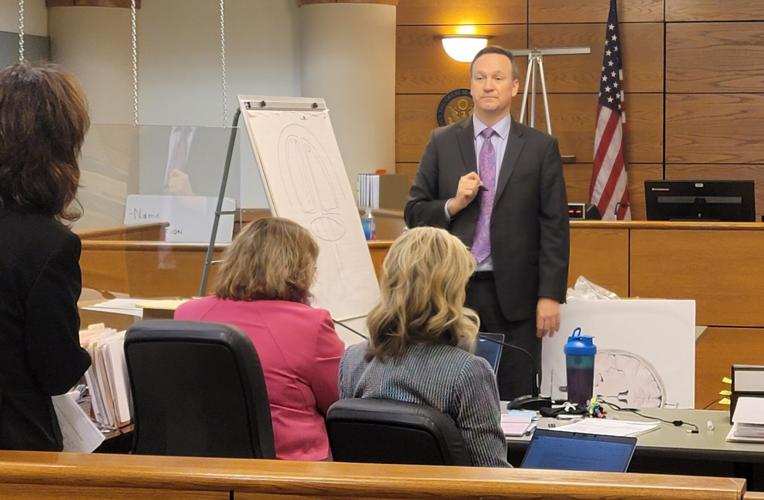 Dr. Evan Matches, a forensic pathologist with NAAG Pathology Labs, explains the human brain to the court last week during Jeremy Marquez's homicide trial in the death of his infant son. 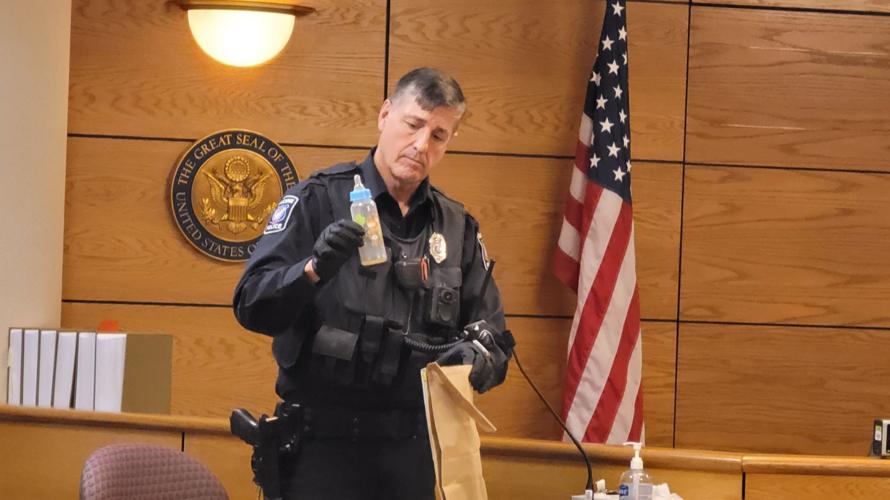