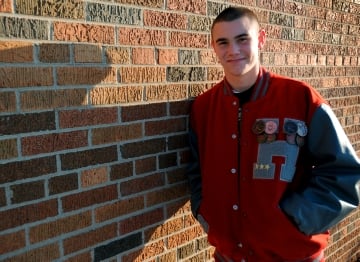 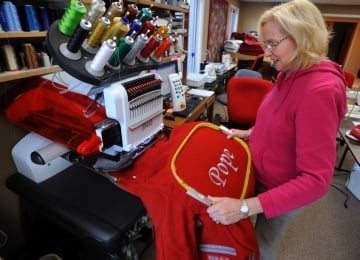 What's brightly colored, fuzzy and still all the rage after nearly a century?

"I just got it this year," Horlick High School sophomore Will Arnold said of his letter jacket. "I really wanted one. In high school it's just a symbol that you do well."

The tradition of wearing letter jackets, still popular among Racine boys and girls, isn't slowing down much in the recession and the jackets, bought most often around this time of year when fall sports' seasons end, can make great Christmas gifts.

If you get things right that is. Letter jackets may seem like simple ways to show off student accomplishments and school spirit but the letter and patch placements on the jackets are actually quite specific.

And there are lots of pieces students can add to their jackets beyond the letters they receive from their schools for athletics, academics or extracurriculars like music and drama.

On his jacket, 15-year-old Will Arnold has his athletic letter, last name and graduation year as well as patches for being a sophomore and for the three sports he participates in. He also has eight medals on the jacket, mostly from placing at track and cross country meets.

"I like having the jingle of the medals when you go down the hallway," Will said.

Sales of letter jackets, which cost about $160 before adding the patches, have gone down a bit because of the economy, said Pat Devine, owner of Devine's Sporting Goods Store, 1652 Douglas Ave., which sells letter jackets.

But for the most part, parents or even grandparents are still willing to fork over the cash so students can wear the popular jackets, Fleischmann said.

"It's important for the students," she said. "They worked hard for their letters and their medals. This is part of their reward."

Pam DeGroot agrees. The 49-year-old mom from Caledonia got letter jackets for both of her children because "they really insisted they wanted one" and because she feels the sentimental value of the jackets is worth more than the monetary cost.

"She got a letter in tennis as a freshman," DeGroot said. "When she started college, she needed a winter coat because she had worn the letter jacket all four years before."

DeGroot said, for her kids, the letter jackets are about showing pride in themselves and their school.

"My son is wearing his every day now," DeGroot said of her 16-year-old son Tom, who got a letter this year for football at Horlick. "A lot of (his) friends have them too. One of his friends said he, ‘was getting it for Christmas,' but the kid was so excited they let him wear it now."

Will didn't get his jacket for the holidays but said no matter when someone gets a letter jacket it's exciting.

Wisconsin Vision Associates Inc., a Racine County distributor of contact lenses and other medical goods, is investing nearly $3 million in an …

As local Applebee's prepares to close, man shares story of his mother, featured among the restaurant's historical photos

Scott Leonard shares the story of his mom, Karen Leonard, who was featured in the mural of historical photographs that hangs on the wall of Ra…

Racine man allegedly strikes boy in the face with a table

RACINE — A Racine man has been accused of striking a child in the face with a table during a domestic incident.

MOUNT PLEASANT — A Racine man has been accused of stealing air cans from Best Buy and huffing them in the parking lot.

WIND LAKE — A Wind Lake man has been accused of sexually assaulting a minor over the course of two years.

Meg Fleischmann, owner of Twisted Stitches, removes a completed letter jacket from a stitching machine on Tuesday. Photo by Scott Anderson scott.anderson@journaltimes.com
© Copyright 2023 The Journal Times, 212 Fourth St. Racine, WI 53403 | Terms of Use | Privacy Policy | Do Not Sell My Info | Cookie Preferences
Powered by BLOX Content Management System from TownNews.com.
You don't have any notifications.