RACINE — The Massachusetts Institute of Technology recently called COVID-19 the “pandemic of the unvaccinated,” a phrase co-opted by the Biden administration.

Among the unvaccinated are children, who are either too young to be vaccinated or whose parents have chosen not to get them vaccinated.

In the early days of the pandemic, children represented just 16% of COVID cases in the U.S. For the seven-day period ending Oct. 7, children made up close to 25% of cases nationally, according to a report issued by the American Academy of Pediatrics.

In the City of Racine, that number is a bit higher.

Stephan Kurdas, the city’s coordinator of laboratory services, provided the city Board of Health with an update on local COVID cases on Tuesday. He said recent cases of COVID in those younger than 18 is on the rise.

“As we saw in the Southern states, our youth make up a higher percentage of cases overall,” Kurdas said.

He explained that last year at this time, individuals under the age of 18 made up about 10% to 15% of the daily reported cases.

But “they make up in the neighborhood of 30% (of new cases) at this current point in time,” Kurdas said.

This increase in cases is attributed to the fact schools opened in full this year, he said.

However, as information provided by the Racine Public Health Department demonstrates, the rate of youths getting vaccinated is proceeding at sluggishly as the adult rate.

According to the AAP, “over 6 million children have tested positive for COVID-19 since the onset of the pandemic” and the rate of new cases remains “exceptionally high.”

The report noted that while death and hospitalization due to COVID are rare for children, the long-term impact of COVID on developing bodies is still being studied.

According to the federal Centers for Disease Control and Prevention, children with long-term COVID experience symptoms similar to those experienced by adults: Fatigue, headaches, insomnia, trouble concentrating, muscle and joint pain, and cough.

Although scientists initially thought children were not contributing to the spread of COVID at the same rate as adults, an article published by Harvard Medical School on Oct. 7 indicated the possibility that children were as contagious as adults — despite their usually more mild symptoms.

According to the CDC, American youths ages 12-17 have a vaccination rate of 42% with 32% completing the series.

However, it is also true they were the most recent groups to get the vaccine option.

Seniors have the highest rate of vaccination — about 80% are fully vaccinated — but they were also the first age group to be fully eligible for vaccination.

Last week, 140 individuals received the vaccine in the city, whether it was a booster shot, the first dose or completion of their series.

How mask ordinance could be lifted

Kurdas’ report to the Board of Health was a mixture of good news and bad.

While the confirmed case count was up 154 cases, there were no deaths, and the hospitalization rate remained roughly the same.

“So that is good news,” Kurdas said.

The city’s current mask ordinance is tied to the transmission level. Currently, the city’s case rate is 203 active cases per 100,000 residents, which the CDC rates as high.

The city needs to get that rate below 49 cases per 100,000 people for three weeks to rise back into the moderate category and have the mask ordinance lifted.

“So we have a bit of work to do ahead of us, especially going into the winter season, where we know it will be a little more challenging to reduce our exposure and risk of transmission,” Kurdas said.

The CDC and the City of Racine Public Health Department continue to encourage those who are eligible to get vaccinated. 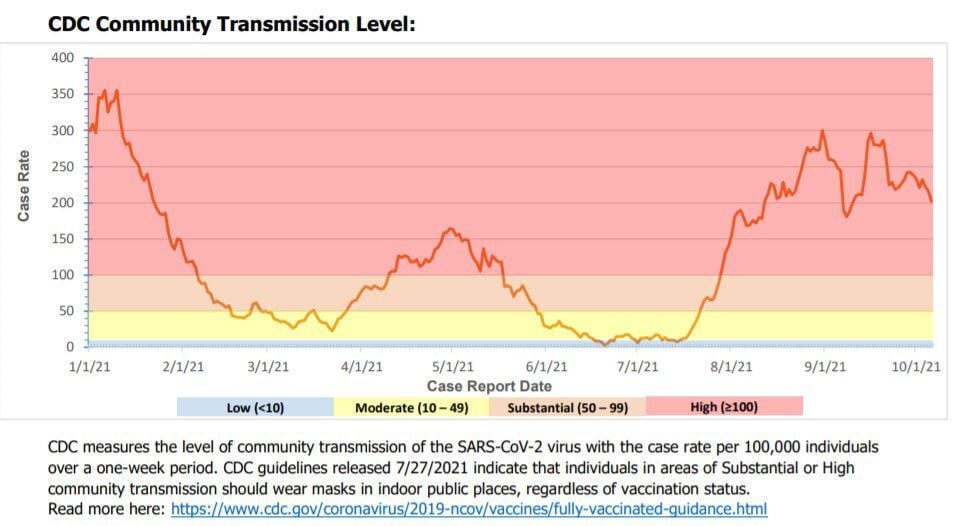 The community transmission level has been up and down but generally hanging out in the high category since August in the City of Racine. 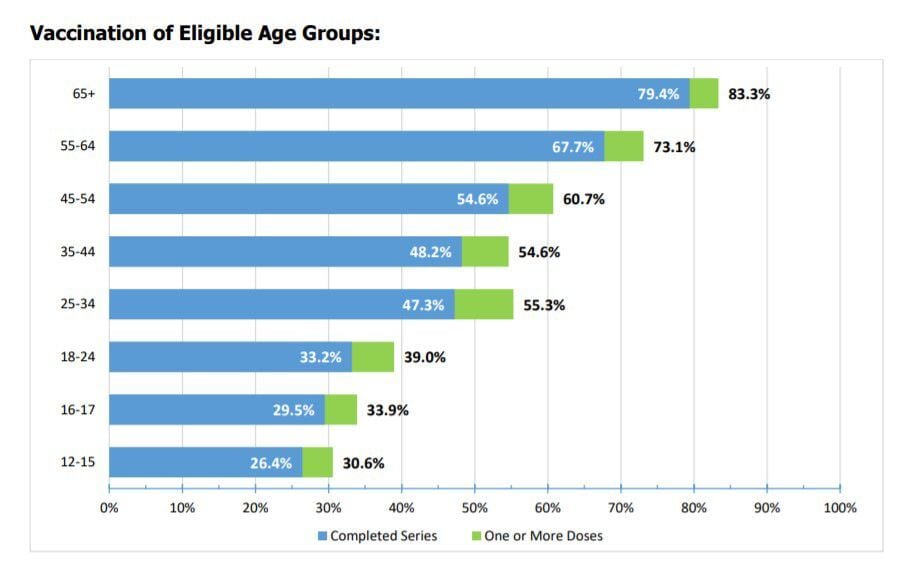 Like the adult rates, youth vaccination rates remain sluggish in the City of Racine.