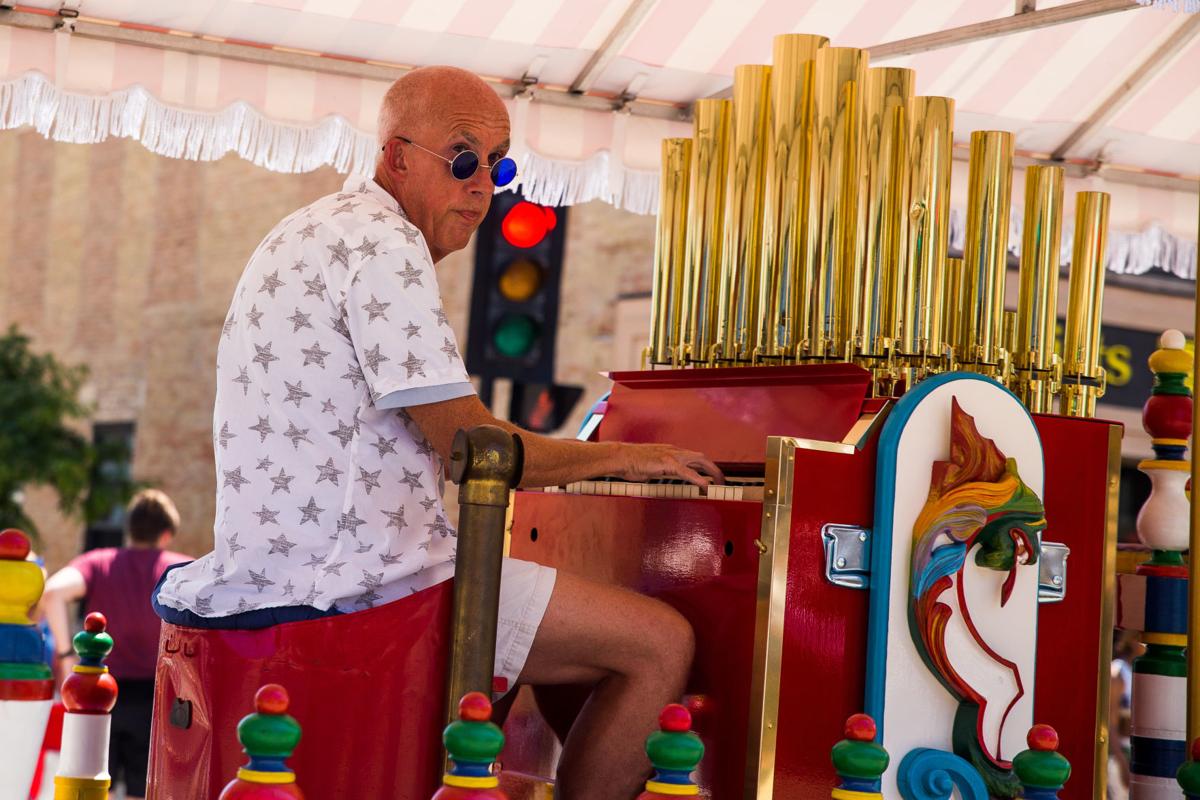 Michael Becker plays 4th Fest's restored calliope instrument during the 2018 parade. This year's parade will be smaller than usual and is set to wind through various Racine neighborhoods. The calliope will be at the front of the parade to announce its arrival. 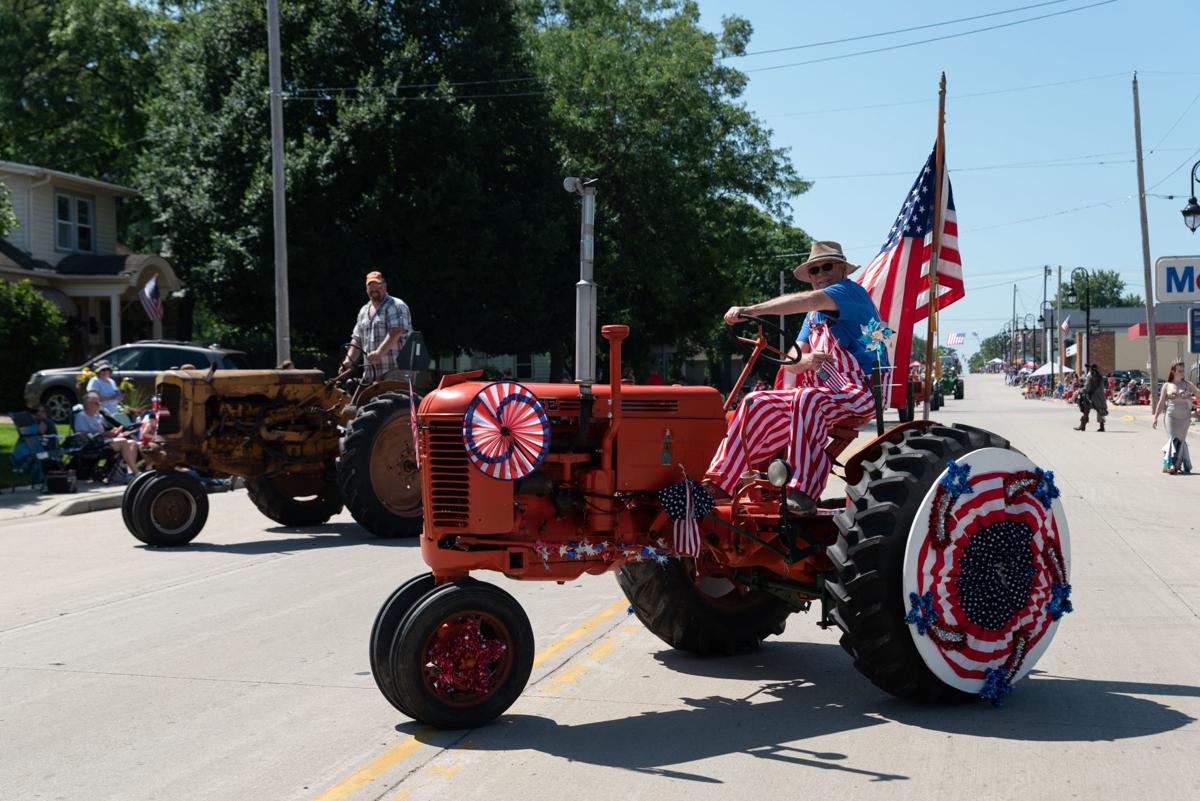 Walter Ott, of the Southeast Wisconsin Antique Power and Collectibles Society, drives down Main Street during the Union Grove 4th of July parade in 2019. While other events are canceled, the Union Grove parade is still scheduled for Saturday.
Caitlin Sievers

RACINE COUNTY — Some events have changed from in years past and others have been canceled, but communities across Racine County are still celebrating Independence Day this year.

The parade for 4th Fest of Greater Racine won’t be the same as in years past, but it’s still happening.

“This will be our 84th annual and we felt very strongly that we didn’t want to skip a year,” said Anna Clementi, a member of the 4th Fest Board of Directors.

According to records, the fest didn’t even cancel the parade in the past during wartime.

Instead of making its way down Main Street with crowds gathered Downtown, this year’s parade will be much smaller will make its way from Racine’s north side to the south side, and will end up at Festival Foods, 5740 Washington Ave., in Mount Pleasant, which is the major sponsor for the parade. The parade is set to begin at 10 a.m. to end at around 1 p.m.

Clementi admitted it was odd that 4th Fest can’t publish the parade route, at the request of the City Health Department, to prevent crowds from gathering. Traditionally 4th Fest’s calliope, an organ that plays festive circus-type music, is always the last float in the parade. This year the calliope will be at the front of the parade, so that when people hear it they will know the parade is in their neighborhood.

Fireworks sales increase as pandemic goes on, fire departments warn they are not legal

The parade will also feature World War II and Vietnam veterans to be honored and the Oscar Mayer Wienermobile.

After making its stop at Festival Foods, the parade will head on to Caledonia-Mount Pleasant Memorial Park in Franksville at about 2:30 p.m. and plans to be at Crawford Park in Caledonia at about 3:30 p.m.

In addition to the parade, several churches will be ringing their bells in celebration from 9 to 9:04 a.m. on Saturday, in what 4th Fest is calling “Let Freedom Ring.”

The fest is also hosting a community-wide house decorating contest for anyone east of Interstate 94. As of early this week, there were about 20 entries. Judges and sponsors were set to view the houses on Friday and to announce winners sometime during the holiday weekend.

Clementi said that while 4th Fest directors were initially disappointed that they would have to scale down this year’s events, they plan to continue the bell ringing and house decorating contest in the future.

“Now we’re really looking at it as a way to introduce some new things,” she said

Those missing the traditional big 4th Fest parade can watch last year’s event on television on WCGV (My 24), at 10 a.m. Saturday. Clementi also advises locals to keep an eye on the 4th Fest Facebook page for photos and video of Saturday’s events.

The Lions Club of Waterford is hosting its 38th annual Fourth of July parade this year.

The kids parade is set to begin at 10:30 a.m. on Saturday, starting at Main and Milwaukee streets and making its way to Pick ‘n Save, 515 N. Milwaukee St.

Kids can begin registering at 9:30 a.m. The kids decorate bicycles, wagons and themselves for the parade, said Scott Gunderson, past president of the Lions Club and parade chairman.

The main parade is set to begin at 11 a.m., starting at 7th and Main, heading west on Main to Milwaukee Street, and north on Milwaukee Street to Trailside School. It usually ends around 1 p.m.

While there are no marching bands this year, there will be several bag pipers and floats with bands playing music.

With video: No lifeguards at Quarry Lake Park this summer; cliff jumping not allowed despite popularity

Gunderson said the Lions Club decided to continue with the parade this year even amid the pandemic as members believe social distancing will be possible.

“Our Lions Club feels very good about this, we just believe it’s time for folks to get out in the community and especially to enjoy our nation’s birthday,” Gunderson said.

The club is working with Waterford Stillhouse to place hand sanitizing stations throughout the parade route and the Stillhouse will be handing out small hand sanitizers to people along the route prior to the parade.

The club will also have signs in the parade reminding people to social distance. The Lions are also encouraging people to wear masks but they are not required.

As of early this week, Gunderson said the parade had more entries than usual.

“I think that just shows that folks do want to get out and be part of their community,” he said.

Union Grove’s parade is set to begin at 9:15 a.m. on Saturday. It begins at the Racine County Fairgrounds and heads east on Highway 11 (15th Avenue) and then north on Highway 45 (Main Street). Check-in begins at 7 a.m. at the fairgrounds and judging begins at 8 a.m.

This year’s theme is “American Heroes.”

Candy can only be distributed by those 12 and older and those passing it out must wear personal protective equipment such as masks and gloves.

Fireworks in Burlington and Tichigan

The City of Burlington’s fireworks show is set to begin at dusk on Saturday at its traditional spot near the Chocolatefest grounds. The City Council approved the event about three months ago and discussed it again about a month ago.

“The Council felt very strong in continuing to have our Fourth of July fireworks, with of course obviously our educational message to be safe,” said City Administrator Carina Walters.

City staff plans to post signs in areas where people tend to gather to watch the show to remind them to social distance.

The 49th annual Tichigan Lake fireworks display, during which about 1,000 boats are known to gather on the lake, is set to take off at dusk on July 4. This year, the fireworks will also be live streamed for those who are unable to make it in person. This year’s show will also include glow sticks, which can be purchased at What About Linda’s tavern, 28837 Beach Drive, Tichigan; Whizbang Hair Salon, 234 Marina Court, Waterford; or Spanky’s Sports Bar and Grill, 485 S. Jefferson St., Waterford.

The traditional fireworks in Racine and Sturtevant, however, were canceled.

Flyover at 4th of July parade

Dennis Wiser wore many hats in his 70 years. He was a City of Racine alderman from 2010-2018 and became the first person to serve three consecutive terms as Racine City Council president in at least 70 years. Then from July 2017 to November 2017 he served as interim after John Dickert stepped down, and before Cory Mason was elected and sworn in. He served on the Racine Unified School Board for 12 years, from 2008 to 2020. Wiser was a retired math teacher who had also previously served as the executive director of the Racine Education Association, the Racine teachers’ union.

On Wednesday, he died unexpectedly.

According to a release from police, a woman was shot after she interrupted a burglary at a home on the 1100 block of Lewis Street, just north of Lincoln Park.

Michael Becker plays 4th Fest's restored calliope instrument during the 2018 parade. This year's parade will be smaller than usual and is set to wind through various Racine neighborhoods. The calliope will be at the front of the parade to announce its arrival.

Walter Ott, of the Southeast Wisconsin Antique Power and Collectibles Society, drives down Main Street during the Union Grove 4th of July parade in 2019. While other events are canceled, the Union Grove parade is still scheduled for Saturday.
© Copyright 2020 The Journal Times, 212 Fourth St. Racine, WI | Terms of Use | Privacy Policy
Powered by BLOX Content Management System from TownNews.com.
You don't have any notifications.