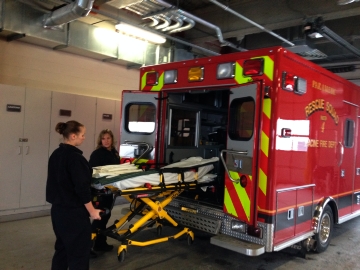 Racine Fire Department paramedics Shannon Anthoine, left, and Rebecca Porcaro load a stretcher into in an ambulance Thursday after dropping off a patient at the emergency room at Wheaton Franciscan-All Saints hospital, 3801 Spring St. The Fire Department responds to every call as if it is a life-threatening emergency, but officials say in many cases there are other alternatives patients should try before calling 911. 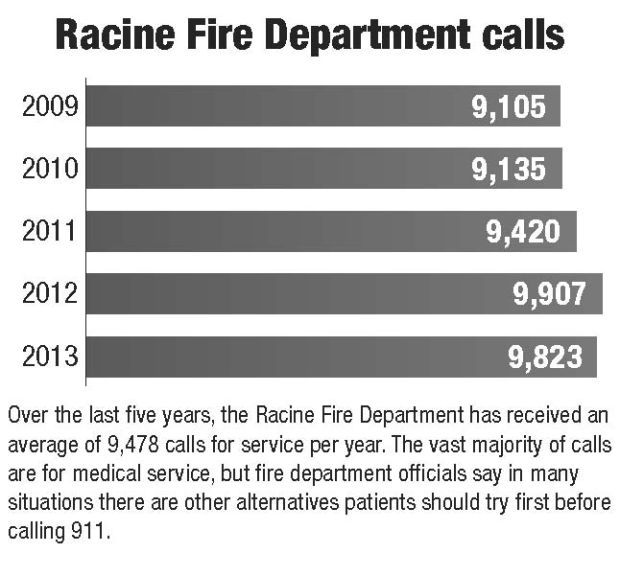 RACINE — The emergency alarm goes off in the fire station: A woman called 911 and needs medical attention.

When paramedics arrive in a matter of minutes, they ask the woman what is wrong, check her vital signs and prepare to take her in an ambulance.

Then on the way out her door, she stops, goes to the bathroom and checks her mail.

It’s not an uncommon scene. Last year the Racine Fire Department responded to 9,823 calls for service, mostly for medical calls. For every one of those calls, rescue crews respond as if it could be a life-or-death situation, but in many cases first responders find patients could have avoided an ambulance ride to the ER if they had tried other alternatives before calling 911. Fire officials say they try to educate people about what a true life-or-death emergency is, but everyone’s perception of an emergency is different and it’s an ongoing challenge. Also, rides are currently fully covered for people on Medicaid and Medicare, leaving some patients with no bill for the service even if other alternatives could have been utilized.

For some people, “the emergency room has become what would have been the family doctor in the past,” Racine Fire Chief Steve Hansen said. As a result, “It takes away our ability to respond to true life-threatening, life-ending emergencies,” Hansen said. Over the past approximately 10 years, the number of calls for service the Racine Fire Department has responded to has been continuously raising, from about 8,500 in 2002 to close to 10,000 the past two years. It’s because more people are relying on emergency services, Hansen said,

As the number of calls has increased, it affects response times, meaning it takes longer to arrive at a call, Hansen said, talking about a problem that has been ongoing.

The city’s aging and low-income population has contributed to the call volume, he said, but another significant factor is the number of people calling 911 when other alternatives should have been tried first.

But if someone wants to go the emergency room, then emergency responders have no choice but to transport that person to the ER.

That ambulance ride typically ends up being fully covered by Medicare and Medicaid, said Nick Hempel, the department’s division chief in charge of emergency medical services.

“I don’t think their main mission is to get a free ride, but it’s reliable,” he said. Currently there is no consequence if someone uses the ambulance for a free ride, although Hempel said in the future under the Affordable Care Act there is a “medical necessity clause” coming down the pipeline where people may have to pay for the ambulance ride if it is later determined they didn’t go to the ER for a “medical necessity.” He has not yet seen the impact of that provision, and did not yet know exactly how it would work.

In certain situations an emergency room is not even the appropriate place for the person to go, Hansen said.

“Some of our patients want a quicker cure to their ills,” Hansen said at a recent Police and Fire Commission meeting. “I can tell you through experience we have transported people to the emergency room for toothaches. What does an emergency room do for toothaches? See your dentist in the morning. They don’t do tooth extractions.”

But just because someone calls 911 does not automatically mean they will get a fast way into the ER.

“This isn’t first-come, first-served. It’s how sick you are,” said Capt. Steve Bisher, a paramedic with the Racine Fire Department.

That can mean sometimes patients are not taken to a bed immediately when they get to the hospital and they are told they will have to wait like everyone else who goes to the ER.

“I would never say it’s not an emergency,” Bisher said about when someone calls 911. “If people are sick and need me, I’m here to help. It’s not my emergency, it’s theirs.”

The problem is people’s perception of what an emergency is.

“What is an emergency for one person is not necessarily an emergency for another person or the medical profession,” Hansen said. Emergency responders try to educate people on calls and remind them to take their medications and call their doctors first.

“My feeling is a lot of it has to start in junior high school,” Hansen said of the education process, adding “We didn’t get here overnight. We are not going to solve it overnight.”

Starting with the basics, Bisher said, if you go to the ER and they tell you to follow up with a doctor, then follow up with the doctor and pick up your needed prescription.

Often, he said, people go to the ER and they are told to follow up with a doctor, but they start feeling better and don’t follow up. Then they end up calling 911 again, he said, and they find themselves back in an ambulance on the way to the ER, repeating the cycle when other alternatives could have been used.

911 should always be called for life-or-death situations.

Racine Fire Department paramedics Shannon Anthoine, left, and Rebecca Porcaro load a stretcher into in an ambulance Thursday after dropping off a patient at the emergency room at Wheaton Franciscan-All Saints hospital, 3801 Spring St. The Fire Department responds to every call as if it is a life-threatening emergency, but officials say in many cases there are other alternatives patients should try before calling 911.