BURLINGTON — An investigation that cleared Burlington High School social studies teacher Jeff Taff of any illegality or policy infraction also criticized him for what the investigator said was poor judgment and a lack of professionalism.

Taff and his supporters have claimed that the teacher has been vindicated following a drawn-out process that brought widespread attention.

Taff “has clearly shown he needs to improve his overall judgment and professionalism as a teacher,” investigator Saveon Grenell, a Milwaukee-based employment and labor attorney, wrote in a report to the district.

The investigator cited incidents when Taff questioned students who chose not to stand for the Pledge of Allegiance; used an inappropriate approach to discussing the Nazi Holocaust; and allowed students to celebrate a holiday with a decoration they labeled “A Very Ghetto Christmas.”

The Burlington Area School District launched an investigation and placed Taff on paid leave after he took vacation days to participate in a Jan. 6 protest at the U.S. Capitol opposing the certification of Joe Biden’s presidential election win over Donald Trump, and after parents and others raised concerns about his behavior at school.

The district announced last week that the investigation found no violation of law or school district policy, so Taff will be returned to the classroom next fall while receiving additional professional training and observation in his $50,000-a-year job.

Taff and his attorney, Todd Terry, last week claimed vindication and said the complaints against him were unfounded and politically motivated.

In response to the new details divulged in the investigative reports, Taff stated in an email that he disputes the investigator’s findings, which he described as “really subjective.”

“I would love for any law firm to fully investigate any teacher and not find some areas of focus to critique or improve upon,” he wrote. “BASD essentially had to find ‘something.’ “

The district released two investigative reports completed by Grenell, both of which included criticisms of Taff’s conduct at school, while finding that district policies permitted such behavior.

"This was nothing more than a disgusting, pathetic stunt."

Taylor Wishau, BASD School Board member, regarding the investigation of Jeff Taff

Burlington Area School District officials said they have no plans to review district polices as a result of the Taff case.

School Board President Peter Turke said the board has discussed the investigative findings. He expects no movement toward adjusting any of the relevant district policies.

“At this point, there’s been no discussion about revisiting our policies,” Turke said.

Another school board member, Taylor Wishau, issued a statement applauding Taff and calling the investigative outcome a “complete vindication” of the teacher. Wishau said those who made complaints against Taff should be required to pay the costs of the investigation.

“This was nothing more than a disgusting, pathetic stunt,” Wishau said.

On other issues raised in the investigation, Grenell reported finding no evidence that Taff had used racial slurs in school, had made sexist remarks or had tried to indoctrinate students to his own personal political beliefs.

However, the two newly released reports show that the investigator found many complaints against Taff to be accurate.

One report covered a parent’s allegations of misconduct by Taff. The other covered the district’s concerns stemming from Taff’s participation in the U.S. Capitol protest.

On the protest in Washington, D.C., the investigator reported that Taff showed students in class — and then posted for them online — a video raising doubts about the legitimacy of Biden’s election over Trump. The investigator also found that Taff messaged students that some of them would not understand why he was joining the Jan. 6 protest on behalf of Trump.

The investigator said that although discussing the election with students would have been acceptable, voicing doubts about the election outcome “brings unnecessary controversy and division into the classroom.” Posting the video for students, he wrote, also showed “questionable judgment.”

The investigator found emails in which Taff questioned individual students about why they were not standing for a daily Pledge of Allegiance in his class. Noting that students are not required to stand for the pledge, the investigator wrote that Taff’s questioning should be “frowned upon” and that it could deter students from exercising their rights not to stand.

In discussing the Nazi Holocaust of World War II, Taff asked students to consider why the Jews would “allow themselves to be killed,” the investigator reported.

Taff also asked students how they would respond if they saw their fellow students being shot. The investigator concluded that Taff’s approach on the subject was “rather concerning and inappropriate.”

The investigator also questioned Taff about why he allowed students to display a “Very Ghetto Christmas” holiday decoration on his classroom door, with a tree and pictures of students. Taff called the display humorous, but the investigator said he found “absolutely no justifiable reason” for such a display.

“It shows poor judgment, insensitivity, and could alienate certain students,” the report stated.

Grenell was hired by BASD. No estimate has been disclosed on the cost of his investigative services.

In addition to Taff and other school staff, the investigator reported that he interviewed seven students. Those students were not identified by name in the reports.

On the issue of whether Taff pushed his own politics in the classroom, the investigator noted that district policy allows teachers to discuss their own beliefs as long as they are not trying to persuade students to adopt any particular belief.

“Several of the students indicated that Mr. Taff would often give his own personal opinion on politics,” the investigator wrote. “Most students did not feel like they were being persuaded one way or another.” 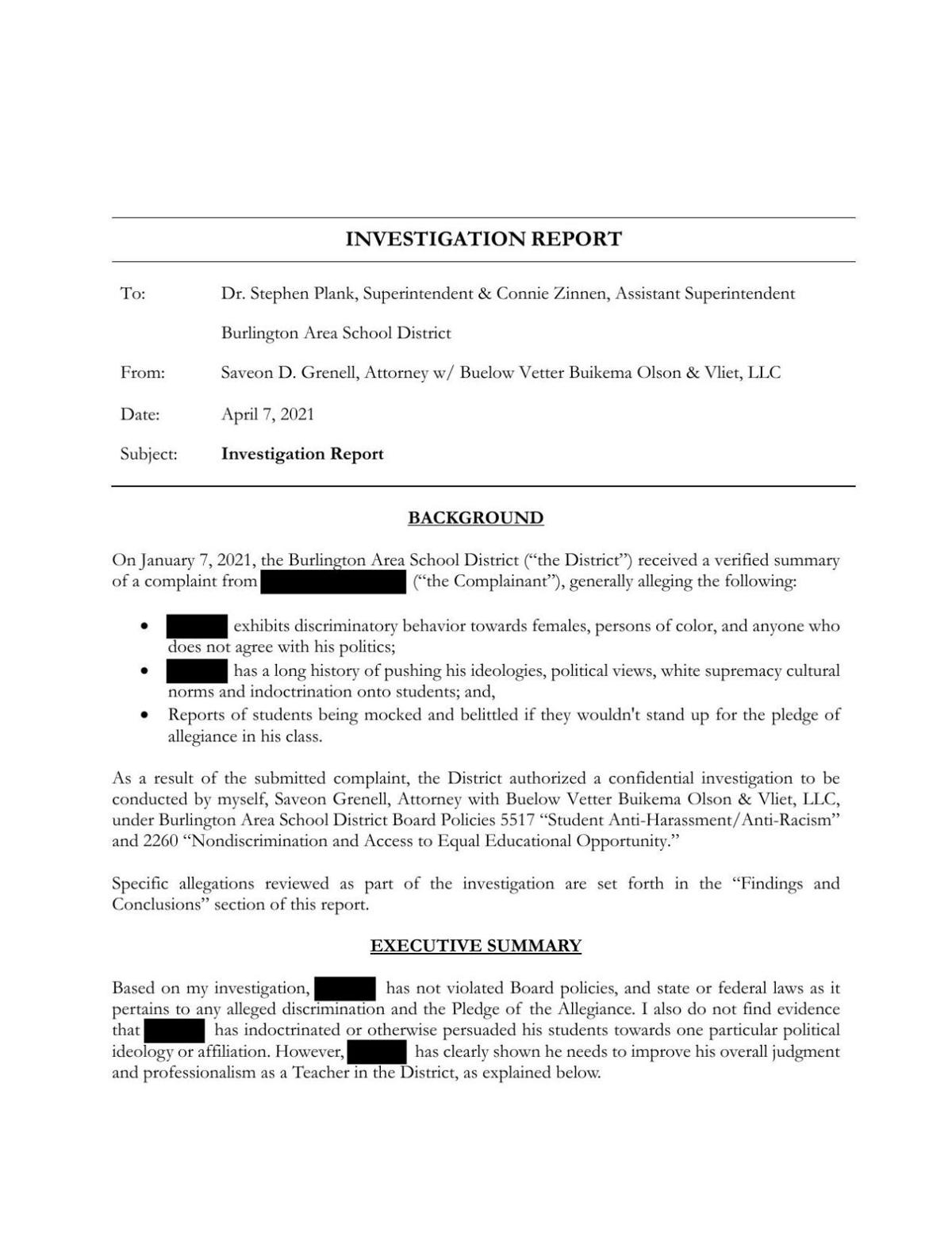 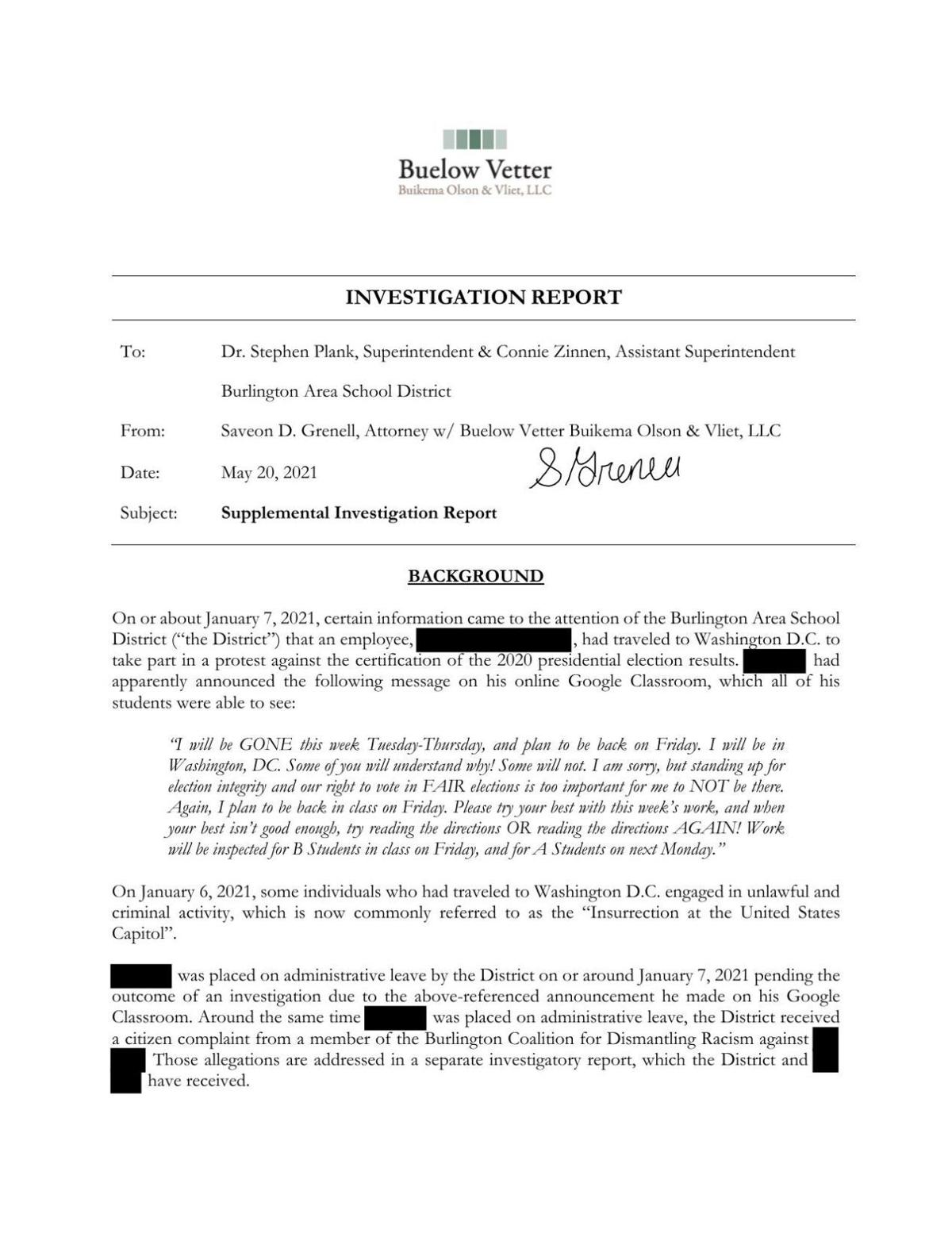 Cheney: Jan 6 probe is not a 'political campaign'

Cheney: Jan 6 probe is not a 'political campaign'

Watch now: Joe Biden is sworn in as president