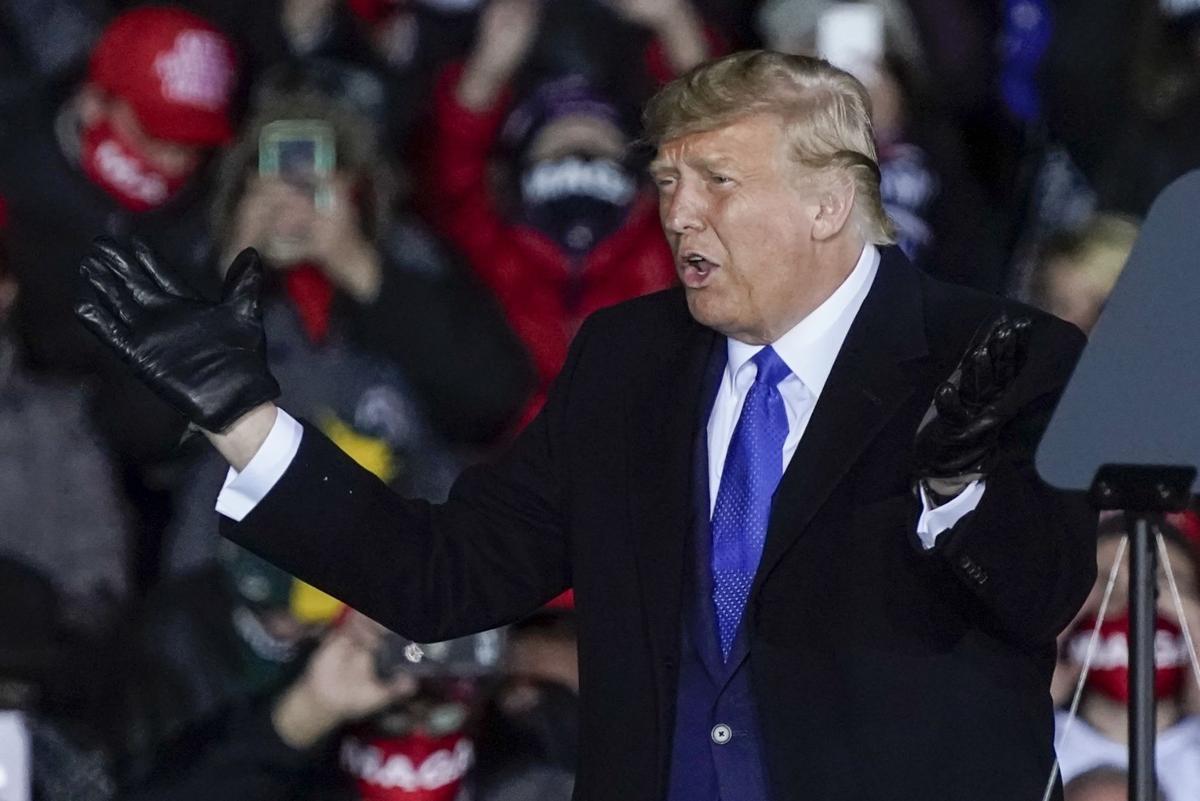 President Donald Trump speaks at a campaign rally at the Waukesha County Airport on Saturday night in Waukesha. 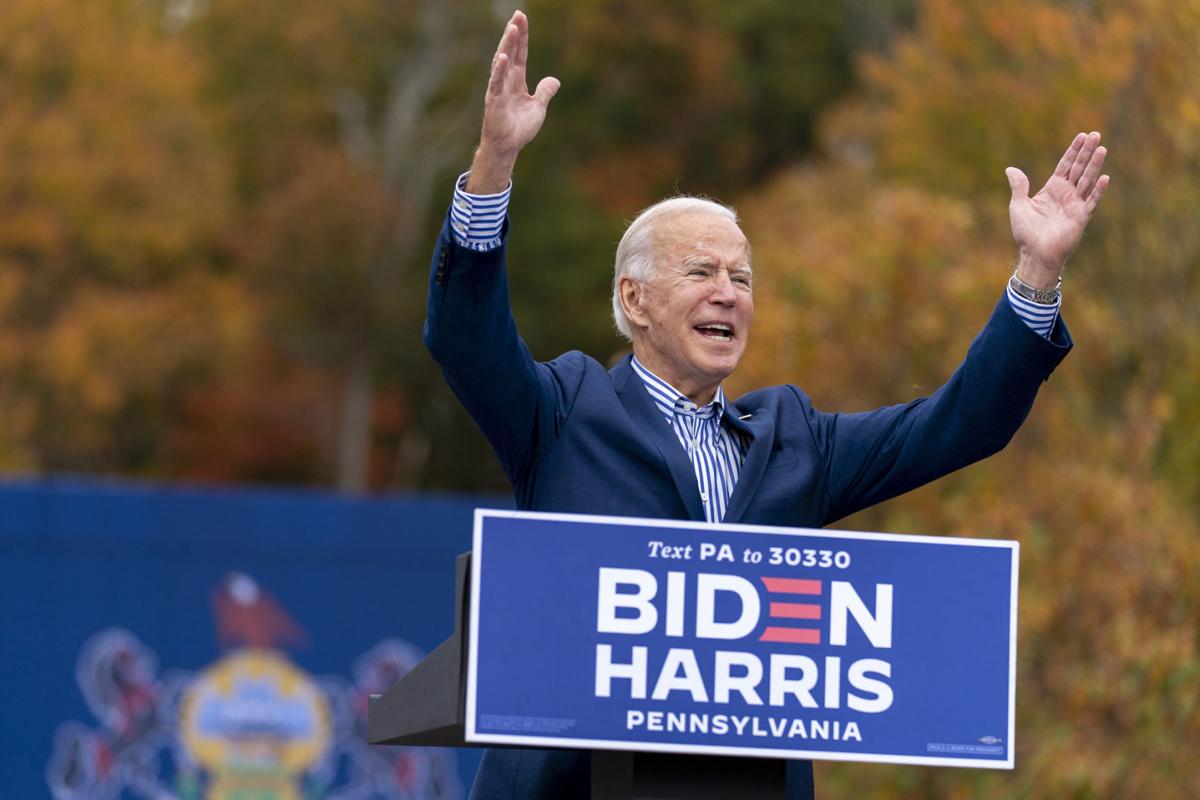 WAUKESHA — President Donald Trump assured supporters packed shoulder to shoulder at a trio of rallies Saturday that “we’re rounding the turn” on the coronavirus — despite spiking cases — and mocked challenger Joe Biden for raising alarms about the pandemic. Meanwhile, Biden bemoaned to a smaller gathering the need to campaign at a distance but said he understood the public health reasons behind it.

With coronavirus infections reaching their highest peak of the pandemic just as the election headed into the home stretch, Trump and Biden took starkly different approaches to the public health crisis in appealing for votes in battleground states.

“We don’t want to become superspreaders,” Biden told supporters at a “drive-in” rally Saturday in Bucks County, Pennsylvania, picking up a term that has been used to describe the Rose Garden event in late September in which Trump announced his latest Supreme Court nominee. More than two dozen people linked to the White House have contracted COVID-19 since that gathering, as have campaign aides.

The former vice president pressed his case that Trump was showing dangerous indifference to the surging virus on a day he looked to boost his candidacy with the star power of rock legend Jon Bon Jovi, who performed before Biden took the stage at a second drive-in rally in Luzerne County, Pennsylvania.

Meanwhile, in Lumberton, North Carolina, his tongue firmly in cheek, Trump called Biden “an inspiring guy” for raising alarm about the pandemic. The president said that he watched Biden’s Bucks County rally as he flew to North Carolina and sarcastically observed that it appeared attendees, who were in their cars, weren’t properly socially distancing.

Trump at his rallies repeatedly criticized the news media for focusing on the virus, which has killed about 224,000 people in the United States and more than 1 million across the globe.

“It’s always cases, cases, cases. They don’t talk about deaths,” Trump complained to a crowd of several thousand at an outdoor rally in Circleville Ohio, where few wore masks even as they stood and sat shoulder to shoulder. “They’re trying to scare everybody,” he said.

Earlier, at a rally in North Carolina, Trump questioned the value of testing, taking a stance in opposition to public health experts across the globe.

The rise in coronavirus cases is an ominous sign the disease still has a firm grip on the nation that has more confirmed virus-related deaths and infections than any other in the world. Many states say hospitals are running out of space in areas where the pandemic seemed remote only months ago. And in addition to the spike in cases, in many parts of the country, the percentage of people who are testing positive for COVID-19 is up as well.

Trump went further, pushing a conspiracy theory that hospitals are over-classifying coronavirus deaths because “doctors get more money and hospitals get more money” — even though there is no evidence of that and experts say the count is likely under-reported.

The U.S. and its reporting systems, “Are really not doing it right,” he claimed. “They have things a little bit backwards.”

As he dug in on his defense on the panic, Trump also criticized Biden for saying that the country was headed for a “dark winter” because of the pandemic — the scenario of a surge in infections that health experts have warned about for months.

“I thought Sleepy Joe was very dark,” he told his biggest crowd of the day at a night-time rally in Waukesha, Wisconsin. “How dark was that? How horrible was that?” he asked.

A record of more than 83,000 infections were reported on Friday alone.

Biden: ‘Where does this guy come from?’

Biden in his stop in Luzerne reminded supporters that Trump had suggested the COVID-19 mortality rate was lower outside predominantly Democratic states.

“Where does this guy come from?” Biden said.

The president has repeatedly accused Biden and other Democrats of pushing measures that are worse than the coronavirus itself by advocating for social distancing and limits on gatherings that Trump says wreak havoc on the economy.

Biden, in an interview with Pod Save America aired Saturday, said his first priority was to “get control of the virus” because the economy can’t move forward without stemming the disease.

“As I said before, I will shut down the virus, not the economy,” Biden said in Bucks County. “We can walk and chew gum at the same time, and build back better than before.”

Trump, who spent Friday night at his private Mar-a-Lago club after campaigning in Florida, visited an early voting polling site set up at a local public library to cast his own ballot Saturday morning. The president last year switched his official residence from New York to Florida, complaining that New York politicians had treated him badly.

Greeted at the polling site by a crowd of cheering supporters, Trump opted to vote in person rather than by mail. He wore a mask inside, following local rules to mitigate the spread of the virus. He later said that he voted for “a guy named Trump” and that a poll worker asked him identification. The president said he used his passport.

Biden hasn’t voted but is likely do so in person on Election Day, Nov. 3, as Delaware doesn’t offer early voting. Trump, who has made unsubstantiated claims of massive fraud about mail-in voting, gave another plug to in-person voting.

Biden’s focus on Pennsylvania, one of the election’s most competitive battleground states, highlights the decisive role it could play Nov. 3. Bucks County is part of suburban Philadelphia, which Democrat Hillary Clinton won by a slim margin in the 2016 White House race. Biden hosted another rally later Saturday in Luzerne County, a blue-collar area that twice voted for Barack Obama but went overwhelmingly for Trump four years ago.

Biden’s was joined by rock star Bon Jovi, a native of neighboring New Jersey who as a child spent summers with grandparents in Erie, Pennsylvania.

More than 54 million votes have already been cast, with an additional 100 million or so expected before a winner is declared.

The pandemic has pushed Trump onto the defensive for much of the fall, but for the moment it is Biden’s team that has been forced to explain itself. In the final minutes of Thursday night’s debate, the former vice president said he supports a “transition” away from oil in the U.S. in favor of renewable energy. The campaign released a statement hours later declaring that he would phase out taxpayer subsidies for fossil fuel companies, not the industry altogether.

But Trump, campaigning in North Carolina, hammered Biden on the issue and used it as a way to question his rival’s mental acuity.

“He’s either crazy or he’s the worst liar,” Trump said. “I actually think there’s a third category. I think he doesn’t remember.”

Biden has said he would ban new gas and oil permits — including fracking — on federal lands only. The vast majority of oil and gas does not come from federal lands.

“I will not ban fracking, period. I’ll protect Pennsylvania jobs, period,” Biden said. “No matter how many times Donald Trump says it. Unlike Donald Trump, I don’t think big oil companies need a handout from the federal government.

President Donald Trump speaks at a campaign rally at the Waukesha County Airport on Saturday night in Waukesha.