STURTEVANT — Glenn Karcher and his grandson, Austin Schoedl, were one of the first few people to walk into the Racine Job Fair on Tuesday.

Schoedl, 18, just graduated from Case High School, and after a few months of enjoying the summer, decided it was time to get a job.

Get full access to exclusive content from The Journal Times and journaltimes.com for one year at this special rate.

“I just want him out there, making good money, get to learning what he can do,” said Karcher, who tagged along to help Schoedl in his job search.

It was Schoedl’s first time on the hunt, ever — and the only thing he brought was “a smile on my face,” he said.

Big smiles like Schoedl’s were seen all around at the Racine Job Fair on Tuesday at Fountain Banquet Hall, 8505 Durand Ave., as job seekers networked with potential employers to find their next opportunity.

Representatives from over 75 companies in Southeastern Wisconsin and surrounding areas were eager to share their company history and open positions. In some cases, representatives even called out to wandering job seekers, reaching out to them with questions like, “What kind of job are you looking for today?” in order to start a conversation.

According to the U.S. Bureau of Labor Statistics, Racine has a 5% unemployment rate this month. The State of Wisconsin is at 3.9% as of June, but that’s still about 120,000 people unemployed.

There seems to be a push and pull in the workforce: Employers are suffering from a worker shortage despite having plenty of openings, but job seekers are frustrated with not hearing back or not getting hired.

Alonzo Payne of the Workforce Development Board of Southeastern Wisconsin — one of the hosts of the job fair — said he hopes hosting a job fair will ease that tug of war.

Roderick Drake is currently employed, but is seeking a better job “to better myself,” he said. When the pandemic hit, he took a job in machine operating because it was the only opportunity he had — despite it not being his field of expertise or choice.

Drake said he’s looking for a job with a healthy and stable work environment with good benefits and good pay, something that he thinks all employers should be able to provide.

“It’s not just about the work, but the environment, too,” Drake said. If he finds an employer willing to give him a healthy work environment, what will he give in return?

Denice Perico of Summit Packaging said companies should support their employees “with a lifetime career and good benefits to make them succeed,” something that her company focuses on.

“We don’t want anyone to go out and fail. We want them to feel welcome,” Perico said.

Dersin, 59, hasn’t had to look for a job since he was 15 years old. The company he formerly worked for was bought out, forcing him to join the hunt. He’s been looking for a job for over five months; out of the 30-40 applications he completed, only six employers have gotten back to him.

“Nobody gets back to you … you put in all this effort applying, and no one calls you back,” Dersin said.

Dersin showed off a row of rejection emails he’d received on his phone and shared how frustrated he was that employers didn’t reach out to him verbally. “I wish they’d do it more old school, have actual interviews instead of on the phone,” he said.

According to Recruiter, there are pros and cons of conducting interviews over the phone. For an initial interview, they can be an indicator to a job recruiter whether someone is an ideal candidate for a full, follow-up interview. They can save time and even ease some of the anxiety that comes with an in-person meeting.

Some cons to a phone interview include the inability to form a deeper connection between an employer and an applicant, and of course, the loss of physical cues like body language and how you present yourself.

Shawn Alexander of Mount Pleasant, a current substitute teacher in the Racine Unified School District, is also struggling with not hearing back from employers.

But equipped with a resume she revised with the help of the Racine County Workforce Development, she was ready to meet employers.

With a background in social work and case management, Alexander is just looking for “something stable.”

After meeting with a few employers, Drake left the job fair with “three very promising leads,” and was full of hope that someone would get back to him. When asked whether he would attend the Kenosha Job Fair on Wednesday, he smiled and said: “I hope I don’t need to.”

The Kenosha Job Fair is on July 28 at Parkway Chateau, 12304 75th St., Kenosha from 1 p.m. to 4 p.m. Those who register on the Kenosha News website are eligible to win a $25 gift card to Kwik Trip and will receive more information about the job fair and employers. 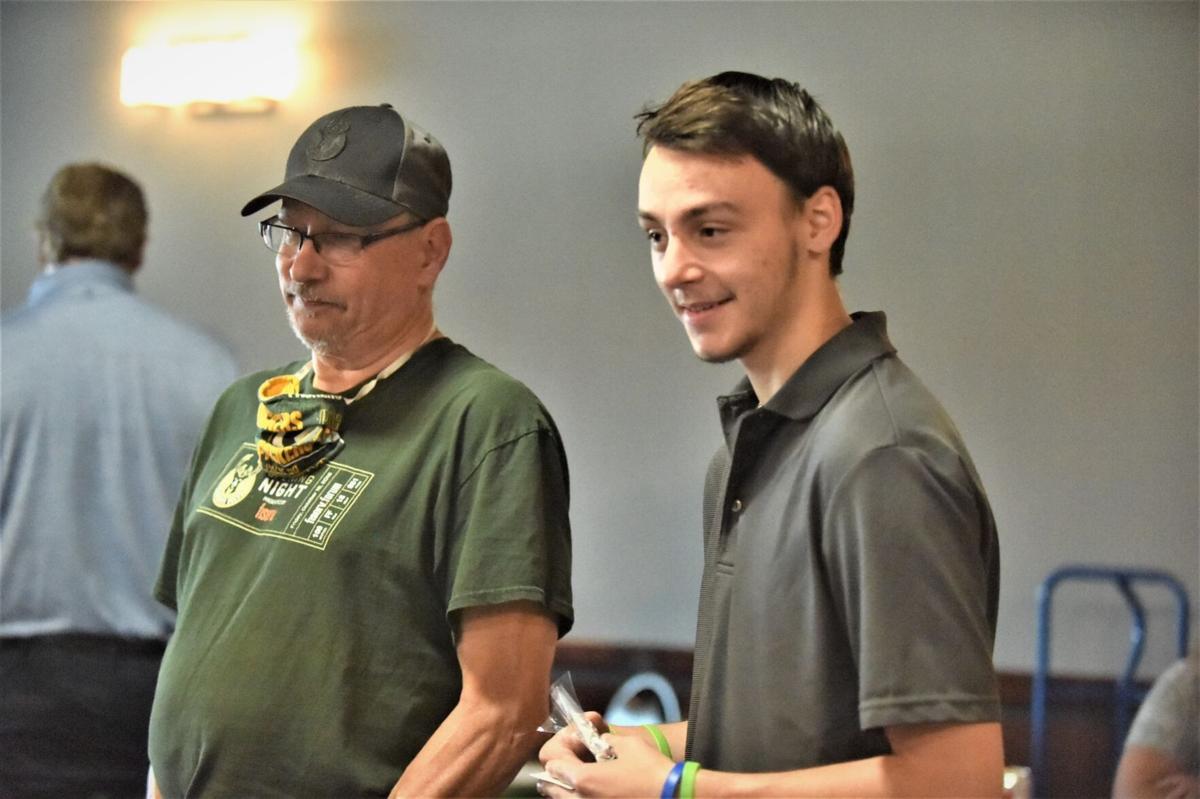 Glenn Karcher and Austin Schoedl speak with potential employers at the Racine Job Fair on Tuesday. Karcher is Schoedl's grandfather and they were job searching for Schoedl. 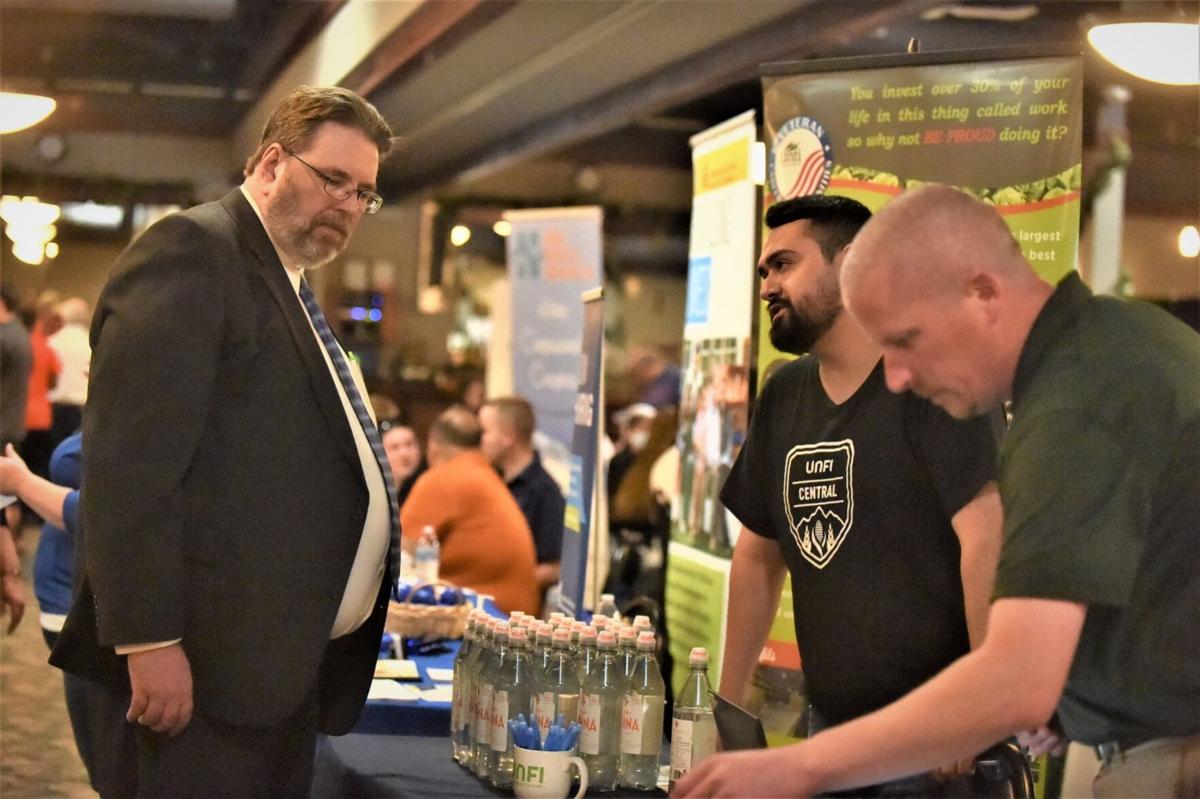 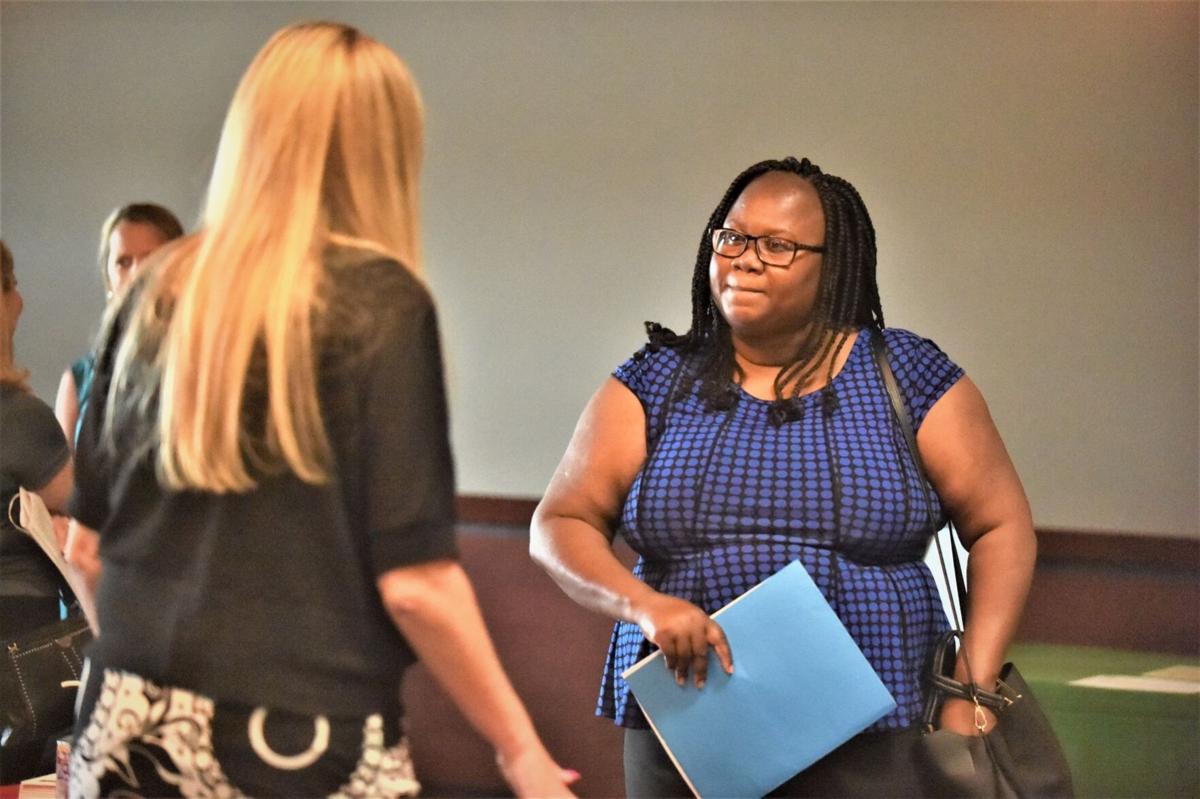 Shawn Alexander of Mount Pleasant speaks with a potential employer during the Racine Job Fair on Tuesday. 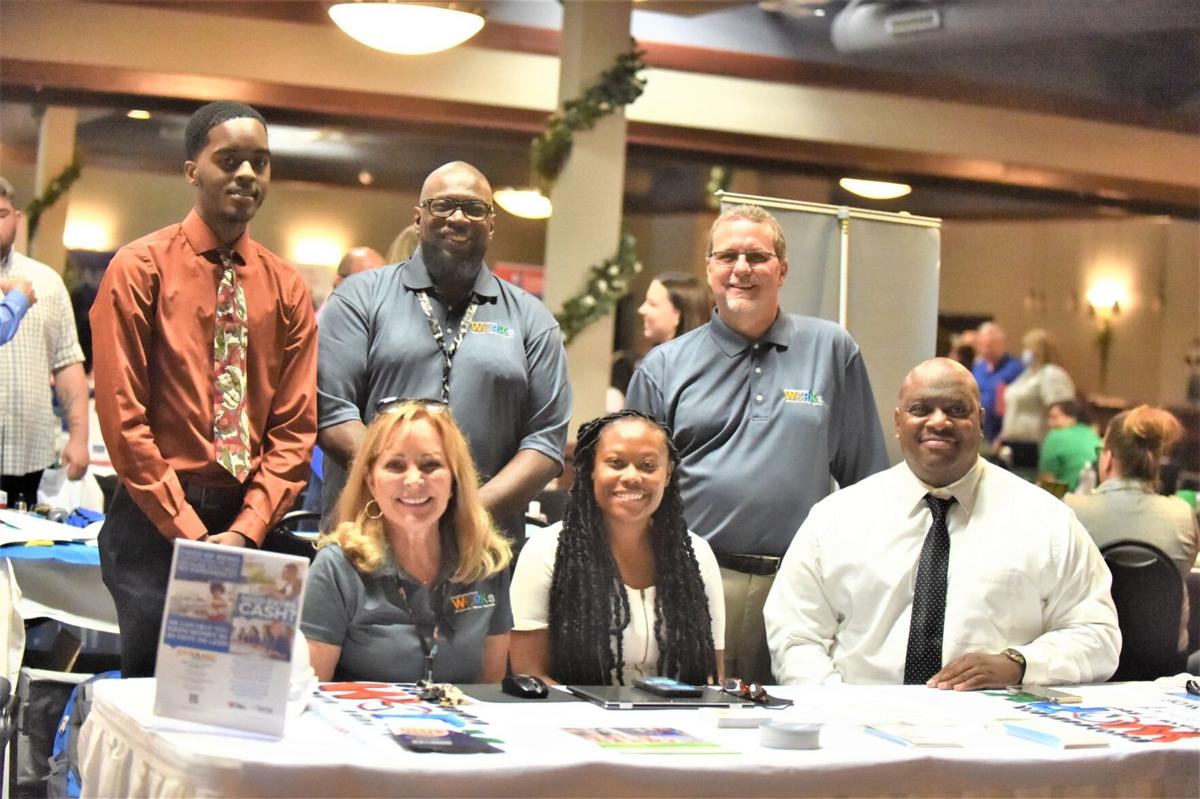 Staff members of the Workforce Development Board of Southeastern Wisconsin are pictured at the Racine Job Fair on Tuesday. The WDB was one of the hosts of the job fair. 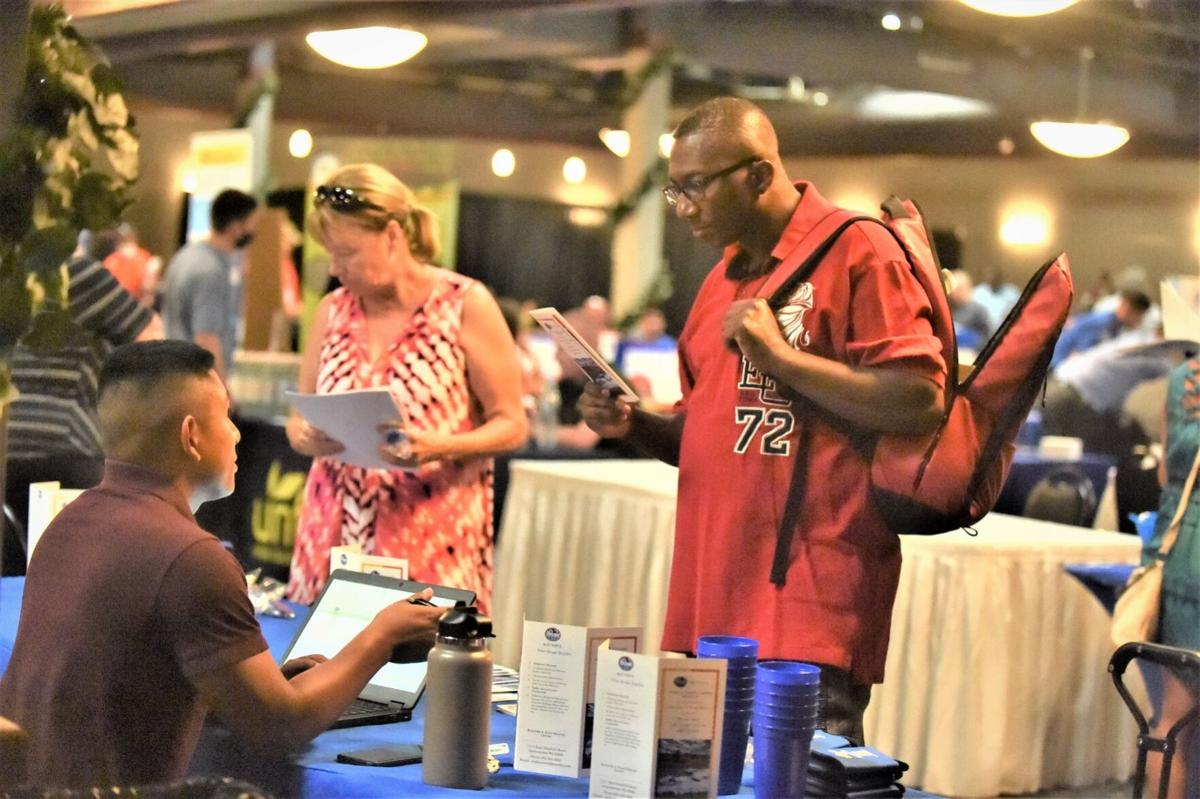 Roderick Drake speaks with a potential employer during the Racine Job Fair on Tuesday. 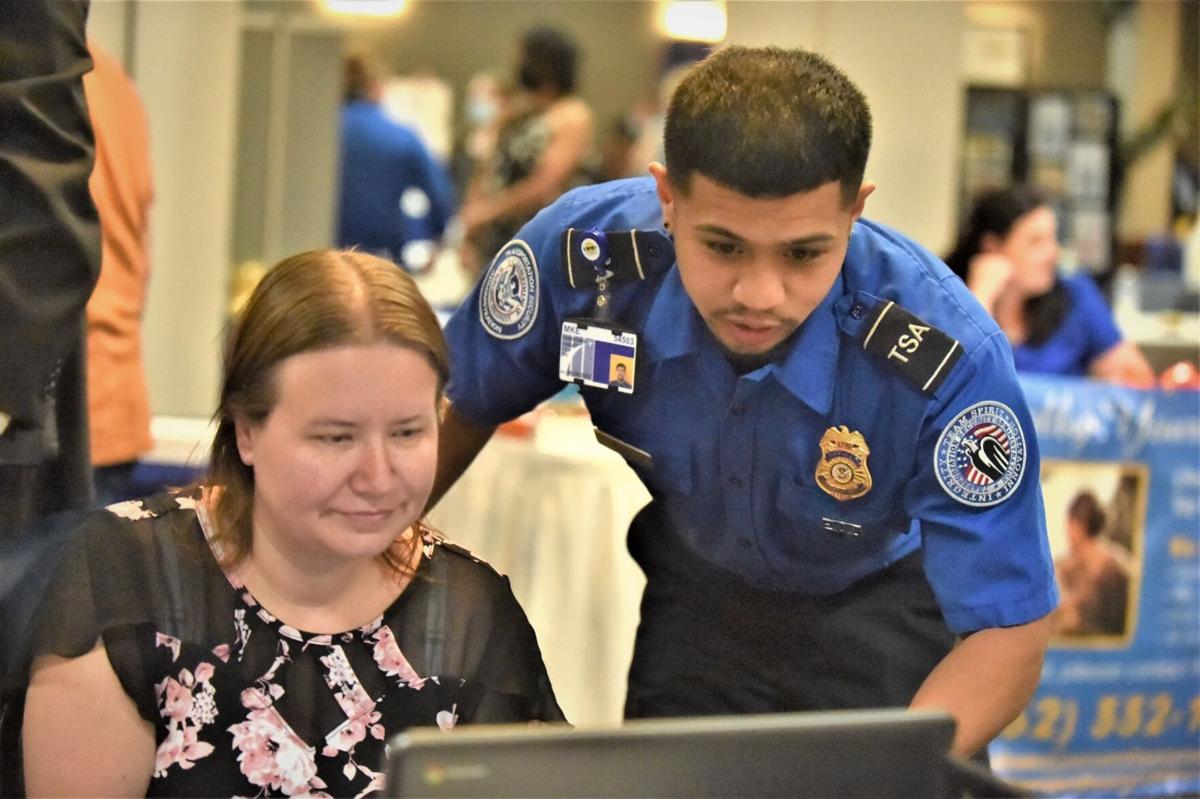 Christian Yamat of the Transportation Security Administration helps a potential employee work on her job application on Tuesday. 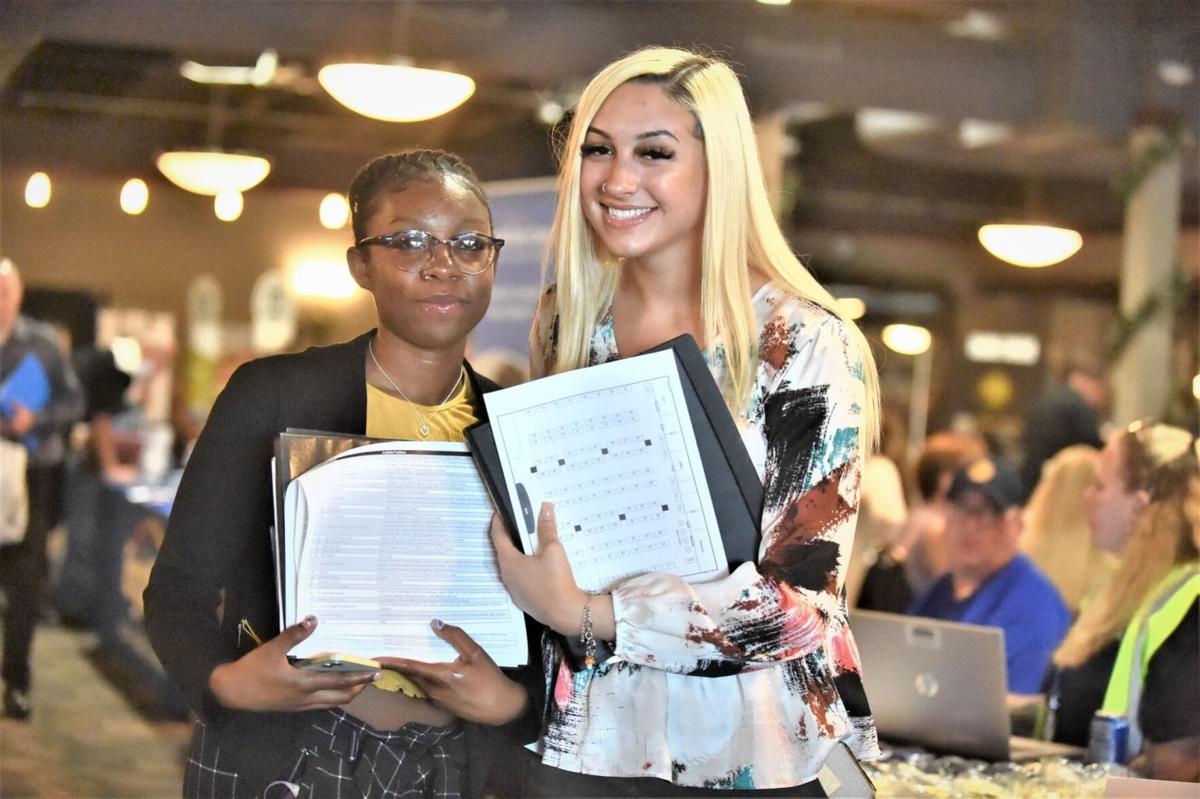 Best friends Jada Patterson and Marina Leer pose with their handouts from the Racine Job Fair on Tuesday.