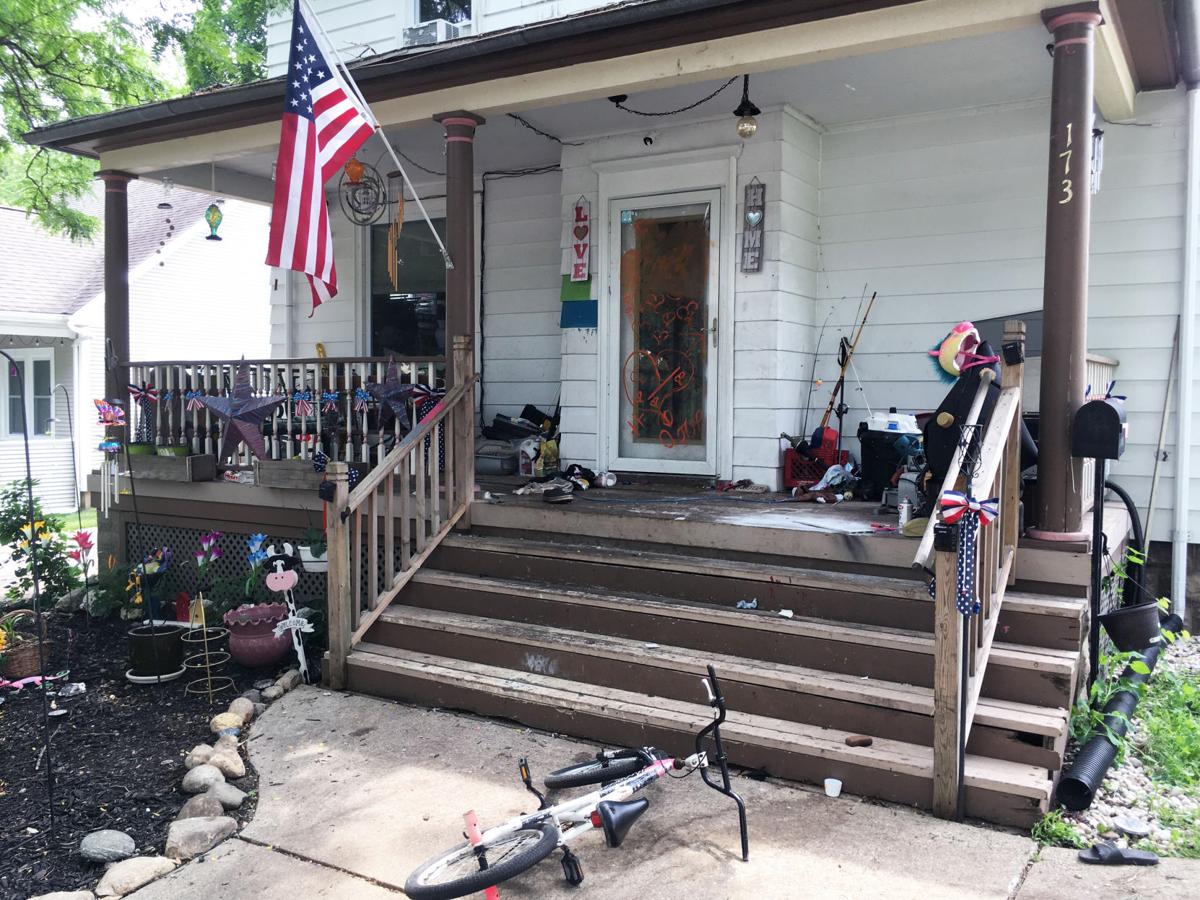 The front porch at 173 W. State St., Burlington, shows the dirty and cluttered conditions that have drawn complaints from neighbors and have prompted city city building inspectors to cite homeowners Robert Glashagel and Roszette Burkhart. 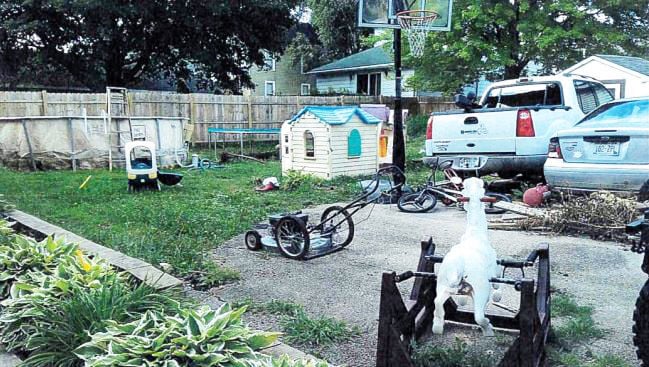 A photo taken by Burlington city building inspectors shows the backyard at 173 W. State St., where inspectors say a fence and swimming pool were installed without proper permits.

BURLINGTON — Four years ago, fire ravaged their house, and supporters rallied around them with a fundraising drive.

Now, neighbors and city building inspectors say the family in the restored house at 173 W. State St. have created a nuisance with filthy and noisy living conditions.

Homeowners Robert Glashagel and Roszette Burkhart also have faced a civil lawsuit filed by the construction contractor who rebuilt their home — and then accused them of not paying the bill.

The situation in the neighborhood near Downtown Burlington has gotten so bad that at least one nearby family sold their house and moved out.

Glashagel and Burkhart could not be reached for comment.

‘Really out of control’

Neighbors say the house also generates noise from loud arguments, amplified music and a barking dog. The couple’s children are often reported running into the street and shouting profanity at passersby.

A judge in Burlington Municipal Court in June ordered Glashagel to pay $1,500 in fines for six different violations of property maintenance standards.

But neighbors say the problems remain uncorrected and the neighborhood disturbances are continuing. An alderman has gotten involved, urging building inspectors to take stronger action at 173 W. State St.

Alderman Bob Grandi wrote in an email to city staffers that Glashagel and Burkhart had neglected the issues for years, and that some nearby homeowners were “actually moving.”

The owners of a house next door — who could not be reached for comment — sold their house this summer.

“No one should have to live next to what’s going on there,” Grandi wrote. “It’s just not right, and we owe it to the neighbors to get it fixed.”

The situation began when Glashagel and Burkhart bought the two-story house in 2017 and moved in with their five children, who ranged in age from infant to pre-teen. Racine County land records estimate the house’s value at $65,600.

Not long after the family arrived, a fire broke out that caused extensive damage to the home, and forced the family to move to a hotel temporarily.

A neighbor launched a GoFundMe fundraising drive that collected about $2,800 in donations to help the family. In a message posted on the Go Fund Me page at the time, Burkhart expressed gratitude for the support.

“I’m so thankful to be a part of this wonderful community,” she wrote.

According to the suit, filed in January 2019, the couple’s insurance provider paid $188,257 toward the cleanup. But another $100,527 was due, the suit stated, and Glashagel “repeatedly refused to pay.”

The couple filed a countersuit accusing the contractor of incomplete and defective work. The dispute was settled out of court in March 2020, with no terms disclosed.

Shortly after the family moved back into the house following the restoration, city building inspectors began noticing property maintenance issues.

In December 2018, building inspector Gregory Guidry sent an email to Glashagel noting that rubbish left outside the house must be cleaned up. Guidry added: “Congratulations on finally getting back into your house.”

Over the next two years, the city sent Glashagel and Burkhart at least nine different warning letters about deteriorating conditions. Some warnings stated that the house’s front yard was littered with broken furniture, appliances, ladders, bags of trash and other debris.

“There is stuff all over the yard,” Guidry wrote earlier this year.

The city issued Glashagel eight property maintenance citations, each carrying a penalty of $250. City records show that Glashagel missed court dates to answer to the citations, but eventually he was fined for six of the eight citations.

Guidry declined to comment, saying he had worked out an agreement with Glashagel to clean up the property within 30 days.

Neighbors said they have seen little sign of improvement.

Neighbor Brian Breuckman said a barking dog continues to create disturbances, and the family’s children disrupt the neighborhood with loud outbursts and peculiar behavior. Some of the children have gone inside Breuckman’s house without permission, he said.

“It drives me nuts,” he added.

Hughes said he offered to let the family stay at his house following their 2017 fire. They declined the offer. Now, he said, the family has disrupted the neighborhood with “chaos everywhere.”

He worries that the issues at 173 W. State St. will hurt property values, as he prepares to put his house on the market. The neighbors are not the main reason for deciding to sell his house, Hughes said, but they certainly are a factor.

“It’s been a real problem,” he said. “It’s a terrible situation.”

Pages from the past, July 17: Racine merchants issue call for meeting to decide upon course to be taken under female labor law

The front porch at 173 W. State St., Burlington, shows the dirty and cluttered conditions that have drawn complaints from neighbors and have prompted city city building inspectors to cite homeowners Robert Glashagel and Roszette Burkhart.

A photo taken by Burlington city building inspectors shows the backyard at 173 W. State St., where inspectors say a fence and swimming pool were installed without proper permits.