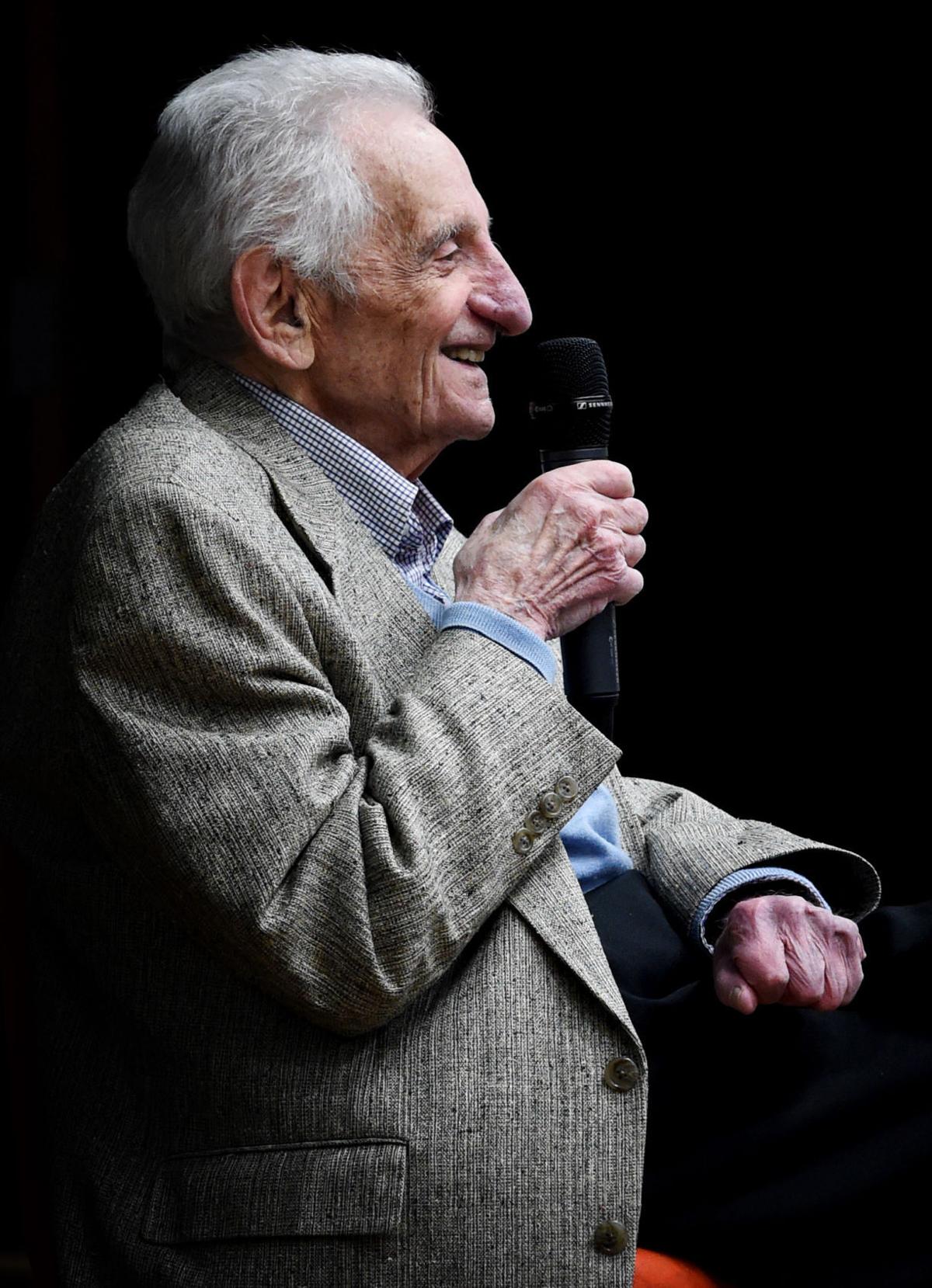 Manny Chulew of Kenosha, a 92-year-old Jewish immigrant from Poland who survived the Holocaust in Europe, talks to students on Wednesday afternoon at Gilmore Middle School. 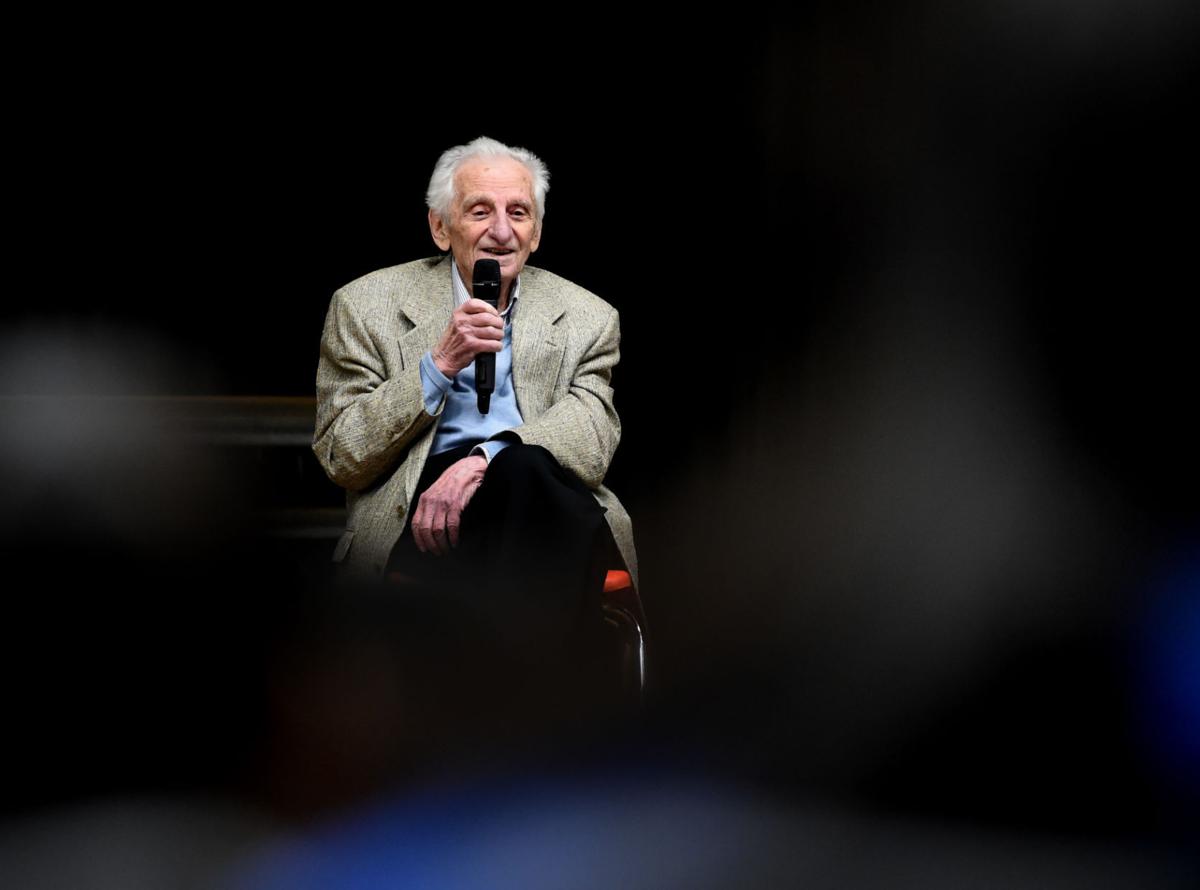 a 92-year-old Jewish immigrant from Poland who survived the Holocaust in Europe, talks to students on Wednesday afternoon at Gilmore Middle School.

RACINE — While the darkness of hate, violence, war and horror engulfed the world from 1939 to 1945, Manny Chulew could still see the light.

Chulew was 15 when World War II started in September 1939. Soon, German troops descended on his hometown of Rymanow, Poland, a hamlet of 4,000 people, almost all of them Jewish.

"They went from house to house to see if anyone was hiding in the basement," Chulew, now 92, told an audience of Gilmore Middle School seventh and eighth graders Wednesday. "Three weeks later, they told us we must leave in 24 hours."

So Chulew and his family began a 12-year trek across Europe, Asia, and eventually, America. As Polish Jews, they lived under a cloud of suspicion, always on the edge of capture by the Nazis, transport to a concentration camp and almost-certain death.

Despite those terrifying times, Chulew remembers the good things. While sitting in a chair on the Gilmore auditorium stage, he urged students to respect others, persevere through troubled times and love life to its fullest.

"You can't go on living the rest of your life hating," he said. "There are good people are all over the world. We must remember that."

During the war, Chulew moved from town to town, worked in a Siberian labor camp for a year and a half, and lived in the central-Asian region of Kazakhstan for four years.

He always tried to find a job, learn the language and do whatever he needed to do to survive.

"He talks about these things as if they were adventures," said Chulew’s daughter Natalie, who lives in Racine and accompanied her father to Wednesday’s presentation. "Other people talk about them as horrors and tragic. He has tried to teach others to see the resources around you and use them."

Chulew came to Gilmore as the seventh-graders were studying Europe and World War II and the eighth-graders read "The Diary of Anne Frank," the well-known book about a young Jewish girl hiding from the Nazis and eventually killed in a concentration camp.

English teacher Heather Bekkers arranged for Chulew to speak at the school. "It’s a once-in-a-lifetime thing to meet someone who has survived that period of history," Bekkers said.

After the war ended, Chulew lived in a string of refugee camps in Europe. In December 1951, he left Austria and took a ship to New York City. He spent a year there and moved to Kenosha in 1952. He owned and operated several furniture stores during the next several decades.

He lives there today, taking walks and volunteering at local hospitals, Natalie said.

"No matter how bad things get, he always has a positive outlook," she said. "I think that comes from knowing that if he had not left his town when they told him to, that he would been taken to a concentration camp. He is a survivor."

Life of a Refugee

Kenosha resident Mendel (Manny) Chulew spent World War II and the years after moving from town to town, camp to camp and city to city.

1939: Chulew and his family moved to Russia.

1941: The family moved to a Siberian work camp.

1946: Family moves to relocation camp in Czechoslovakia, then another in Austria.

1952: Chluew moves to Kenosha, where he lives today.

Manny Chulew of Kenosha, a 92-year-old Jewish immigrant from Poland who survived the Holocaust in Europe, talks to students on Wednesday afternoon at Gilmore Middle School.

a 92-year-old Jewish immigrant from Poland who survived the Holocaust in Europe, talks to students on Wednesday afternoon at Gilmore Middle School.