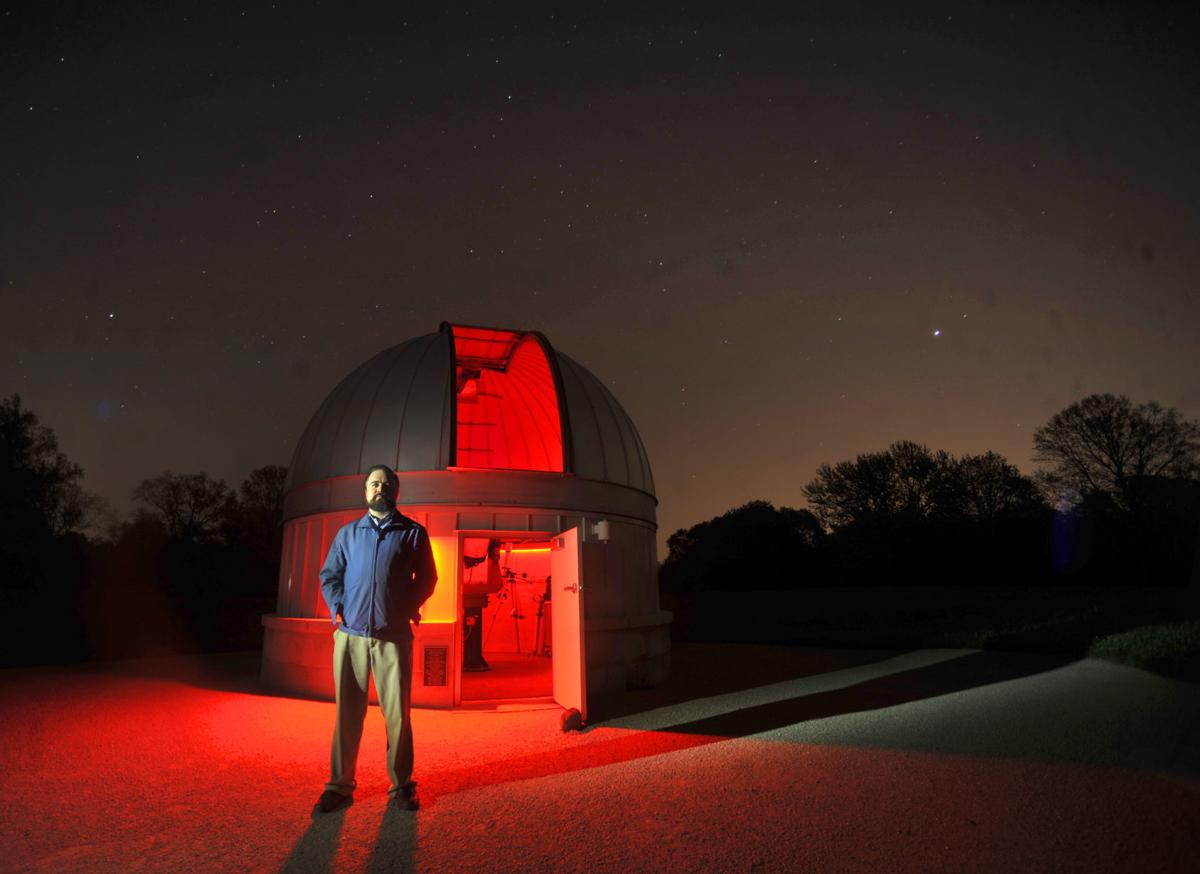 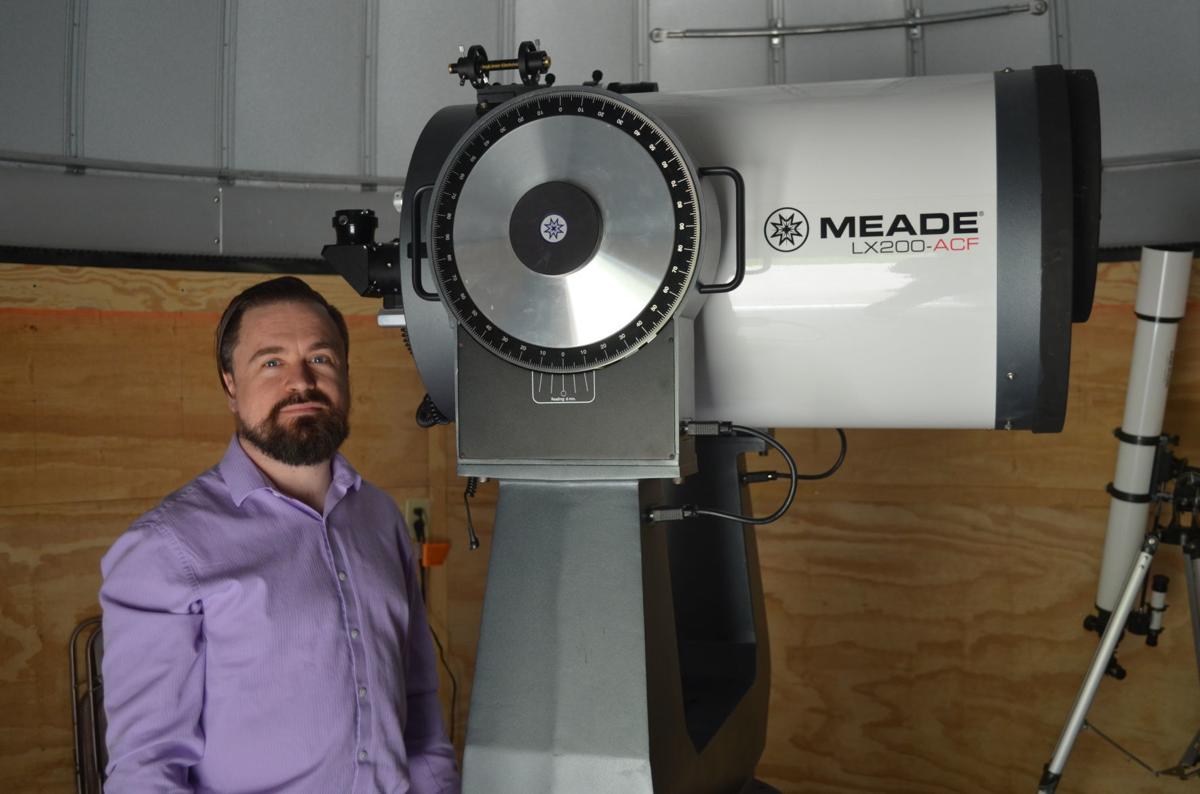 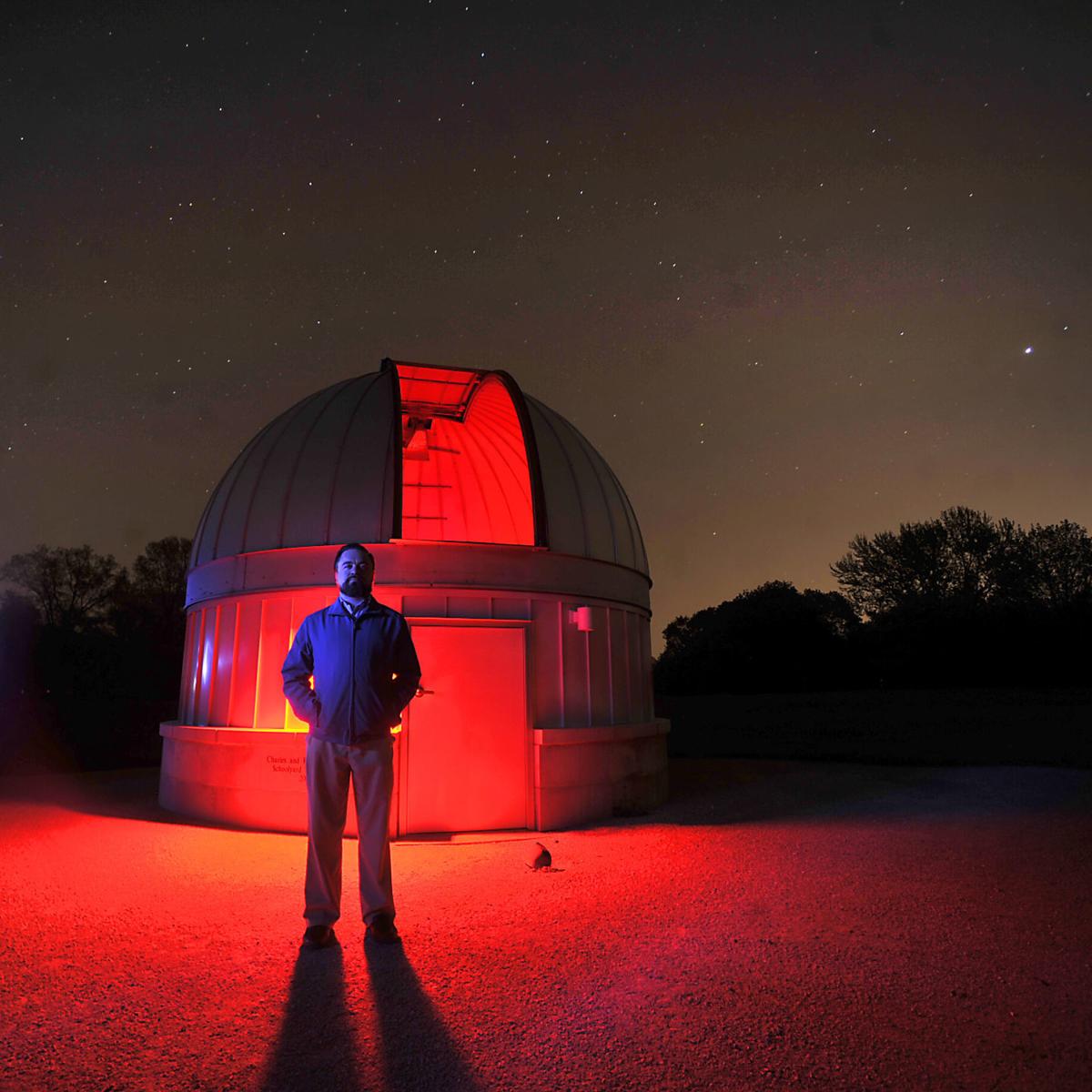 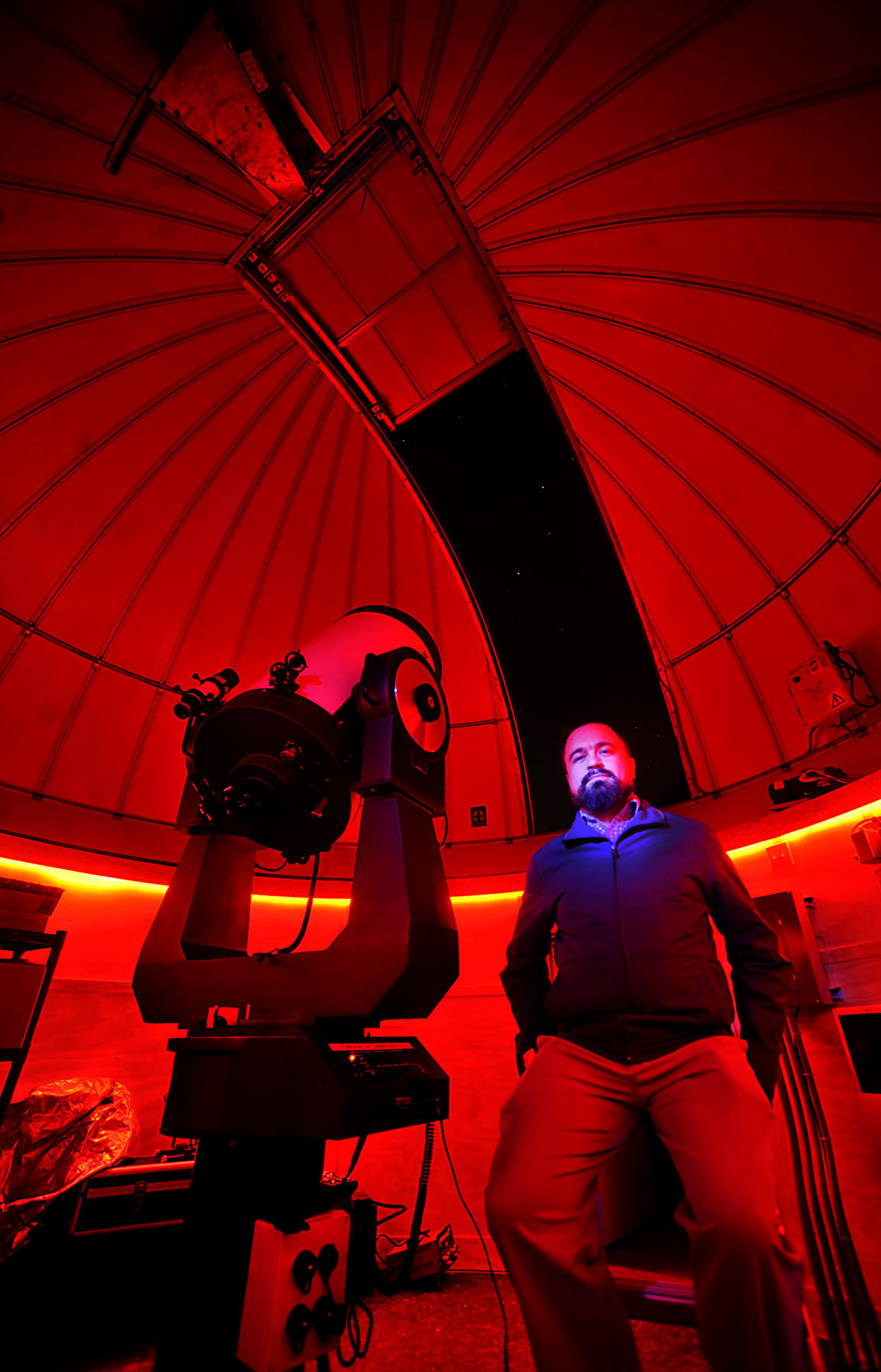 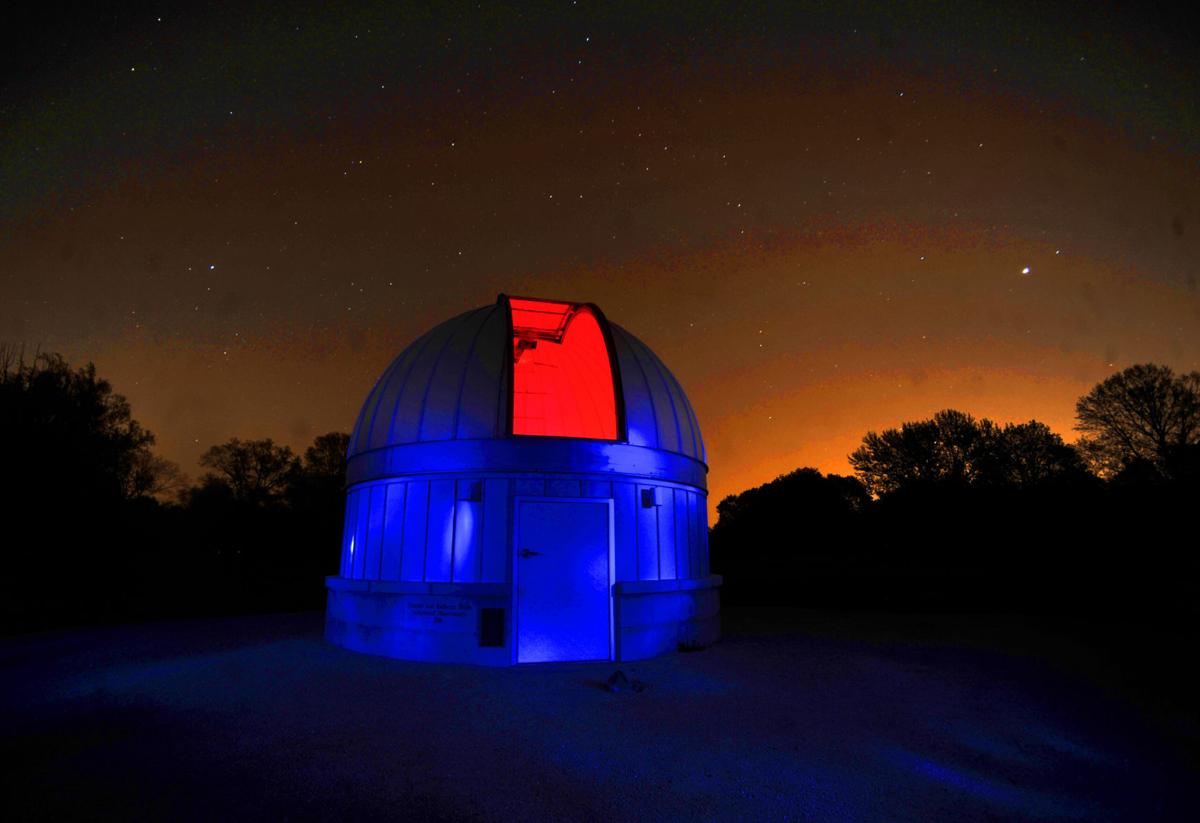 The Charles and Kathryn Heide Schoolyard Observatory at Hawthorn Hollow Wednesday evening, May 16, 2018. 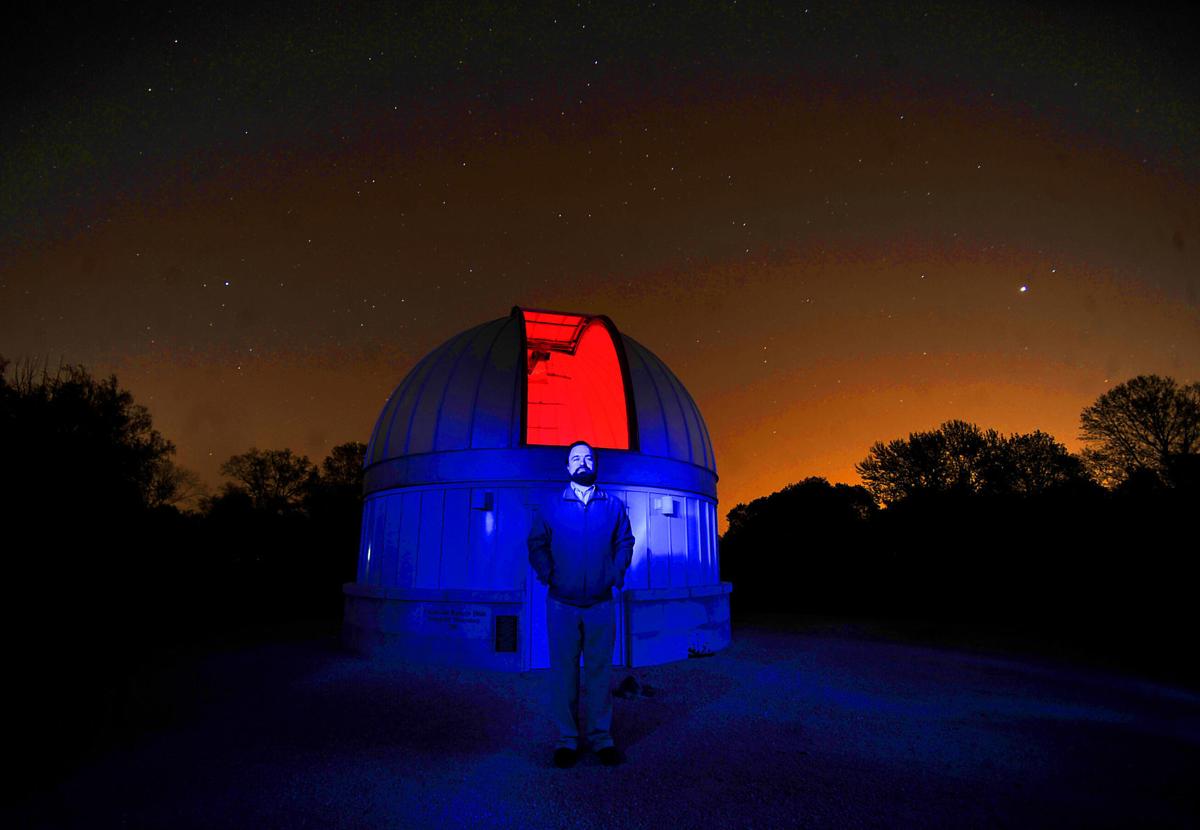 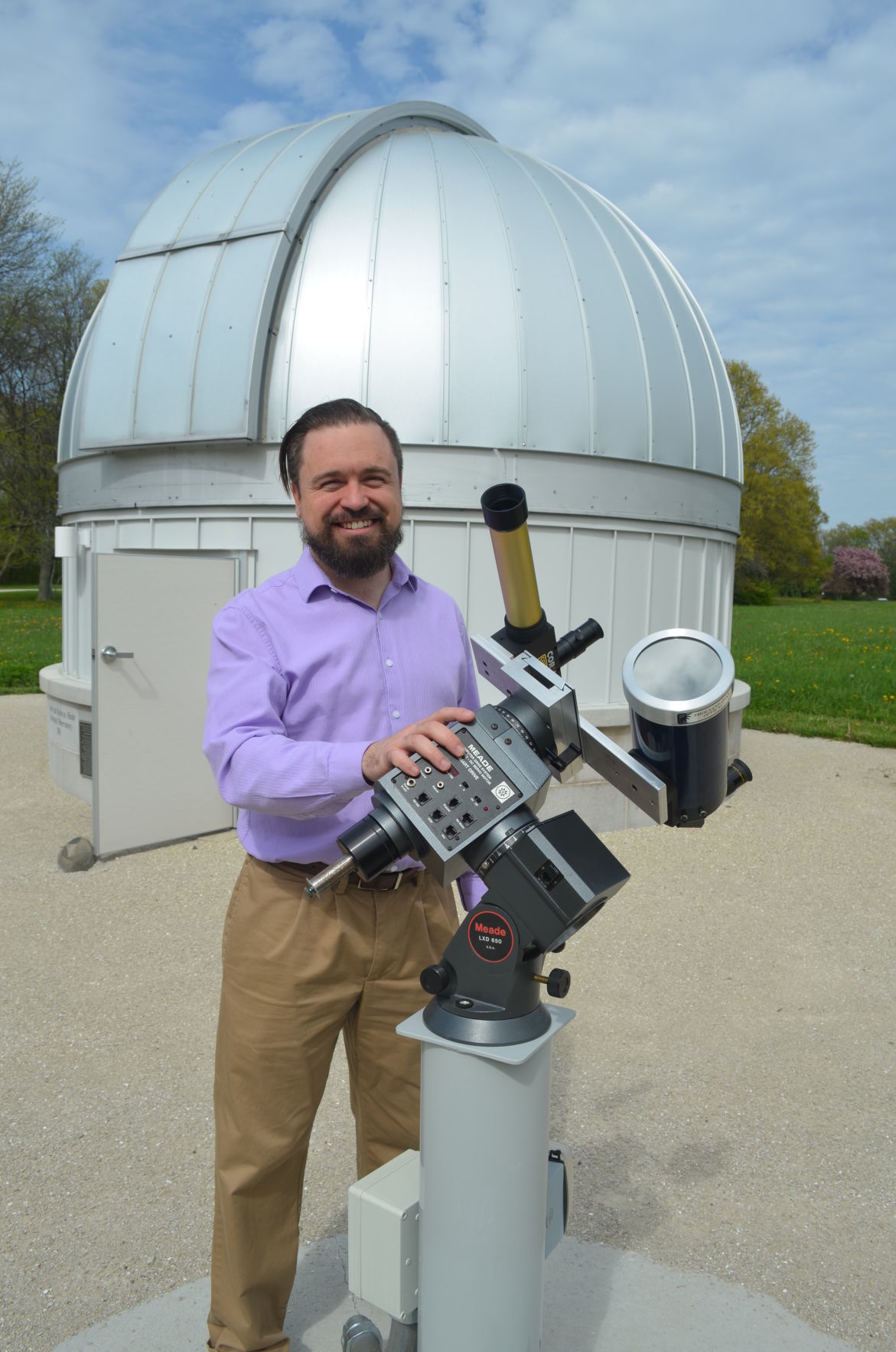 SOMERS — Heavenly bodies just came a little closer with the opening of a new observatory at Hawthorn Hollow Nature Sanctuary and Arboretum.

The 16-inch Meade Schmidt-Cassegrain telescope is a gift from the Heides — who also made a large contribution toward the cost of the observatory itself, said University of Wisconsin-Parkside astronomy and physics Prof. William Parker, the observatory’s part-time director. Parker said “Chuck” Heide bought the telescope in 2005 while on a trip to Arizona, used it himself for years, then donated it to Hawthorn Hollow.

The observatory’s 16-foot-tall dome is mechanized, and the automated telescope can be pointed with precision in all directions. It is wired to controls inside the nature center’s office a few hundred feet away. After much tinkering over the winter, Parker can now pick out any celestial object from his office, and the telescope will find it and follow it as it moves across the sky.

In the adjoining classroom, an audience of up to about 40 people can then watch what the telescope is showing on a 3- by 5-foot television monitor.

The telescope can also be used for taking still photographs.

And, just outside the observatory are two mounts for smaller telescopes. The observatory hosts daytime and nighttime field trips as well as “star parties” during the summer.

Hawthorn Hollow, located between Racine and Kenosha, is a pretty good location for the observatory, Parker said, but not unaffected by light pollution from both cities. That means the best viewing is east and west of the Heide Observatory.

Parker has been able to see all of the planets but Neptune and Mercury. “(Mercury) is hard to catch,” he said.

He’s also used the telescope to see Jupiter and Saturn’s moons, the Andromeda Galaxy which is tens of millions of light years away, nebulas in the constellation Orion’s sword and a variable star, meaning its light brightens and dims.

The main use for the Heide Observatory, Parker said, will be education through one- to two-hour classes, and several are planned so far. His goal is to offer classes about every week.

“Sometimes we’re pairing them with various nature observing,” Parker said, “because that’s what’s here.” The first example is “Birds and Early Birds,” from 4-5 a.m. this Thursday. Participants will view planets with their naked eyes while listening for predawn birds which Hoy Audubon Society birding expert Rick Fare will identify. The class, for adults only, costs $3. In the event of inclement weather, Parker will use indoor planetarium simulation to teach how the sun, moon, stars and planets move across the sky.

“And there’s things you see in the morning that you just don’t see at night,” Parker pointed out. For example, currently Mars and Saturn don’t appear until after midnight. “They’re best viewed, right now, in the morning,” he said.

Another such nature-sky combination program will be “Bats and Observatory” night, from 8-11 p.m. July 25.

There will be no cost for the observatory open houses, and three more are planned for June 23, July 21 and August 25, all Saturdays.

For a list of all programs and open houses scheduled through July 11, visit www.hawthornhollow.org/observatory.

“Birds and Early Birds,” combining telescope gazing with birdwatching, is scheduled for 4-5 a.m. this Thursday. The cost is $3; adults only.

The first? free open house for the Charles and Kathryn Heide Schoolyard Observatory is scheduled for 8:30-11:30 p.m. Saturday.

For a list of all programs and open houses scheduled through July 11, visit www.hawthornhollow.org/observatory.

At least three of the men and women arrested Wednesday for alleged connections to cocaine dealing in the greater Racine area were approved to received federal business COVID-19 stimulus funds last year.

The trailer sales company allegedly failed to enforce its own social distancing rules.

Racine's use of Bird electric scooters by the numbers

Bird scooters in Racine were ridden for a total of 25,345 miles so far this year. That's more than 400 miles longer than the Earth's circumference.

A life with a little bit of everything.

The Charles and Kathryn Heide Schoolyard Observatory at Hawthorn Hollow Wednesday evening, May 16, 2018.