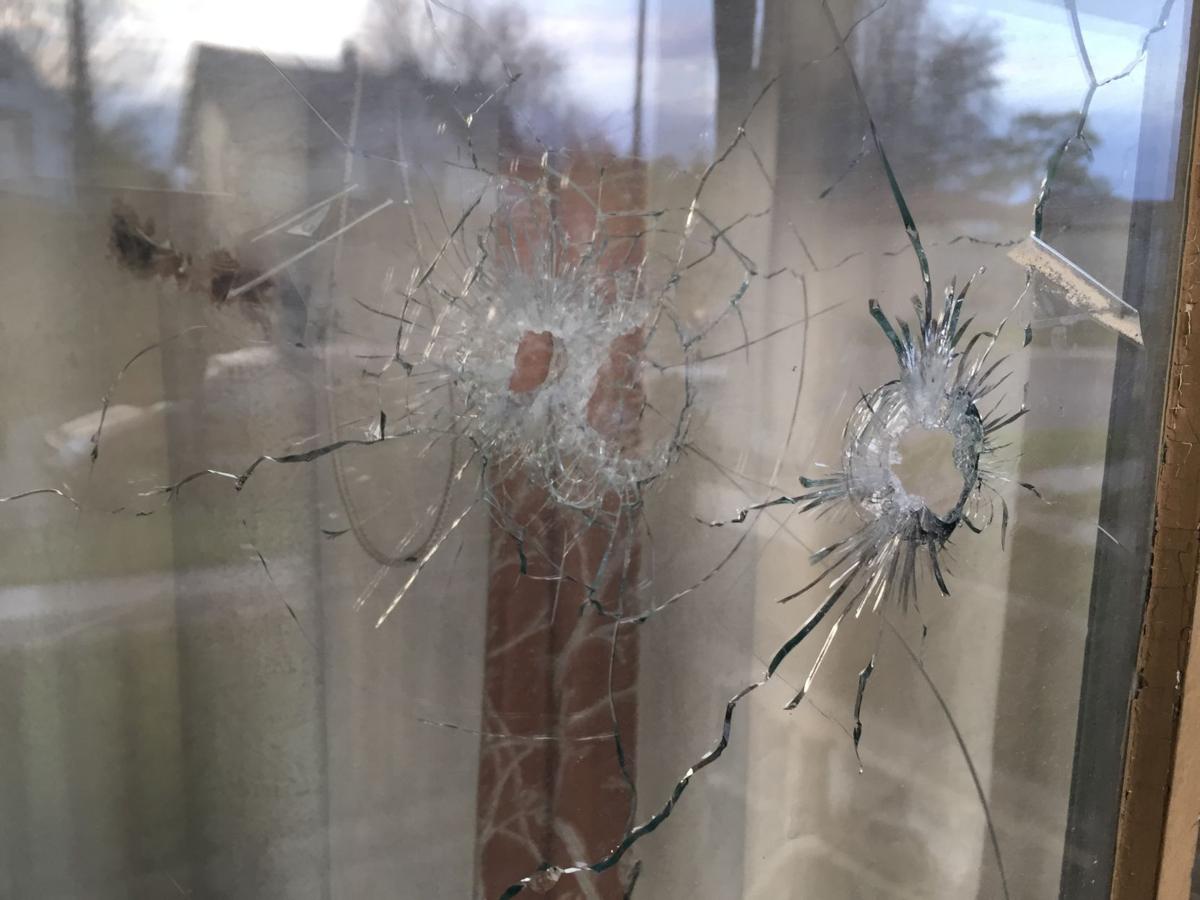 A resident in the 1600 block of Boyd Avenue said he found 10 bullet holes around the front of his home, including this one through his front window, after someone opened fire April 26 while he and his wife slept. 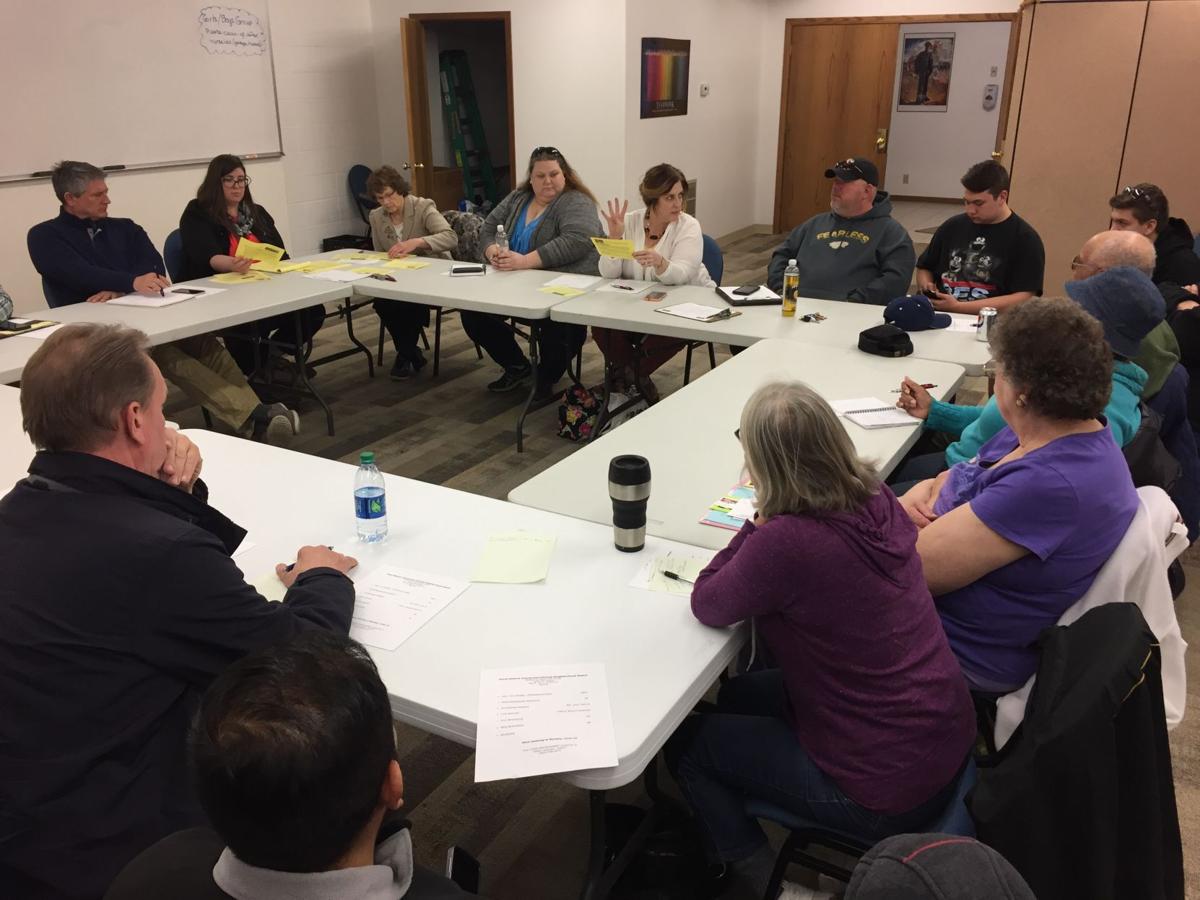 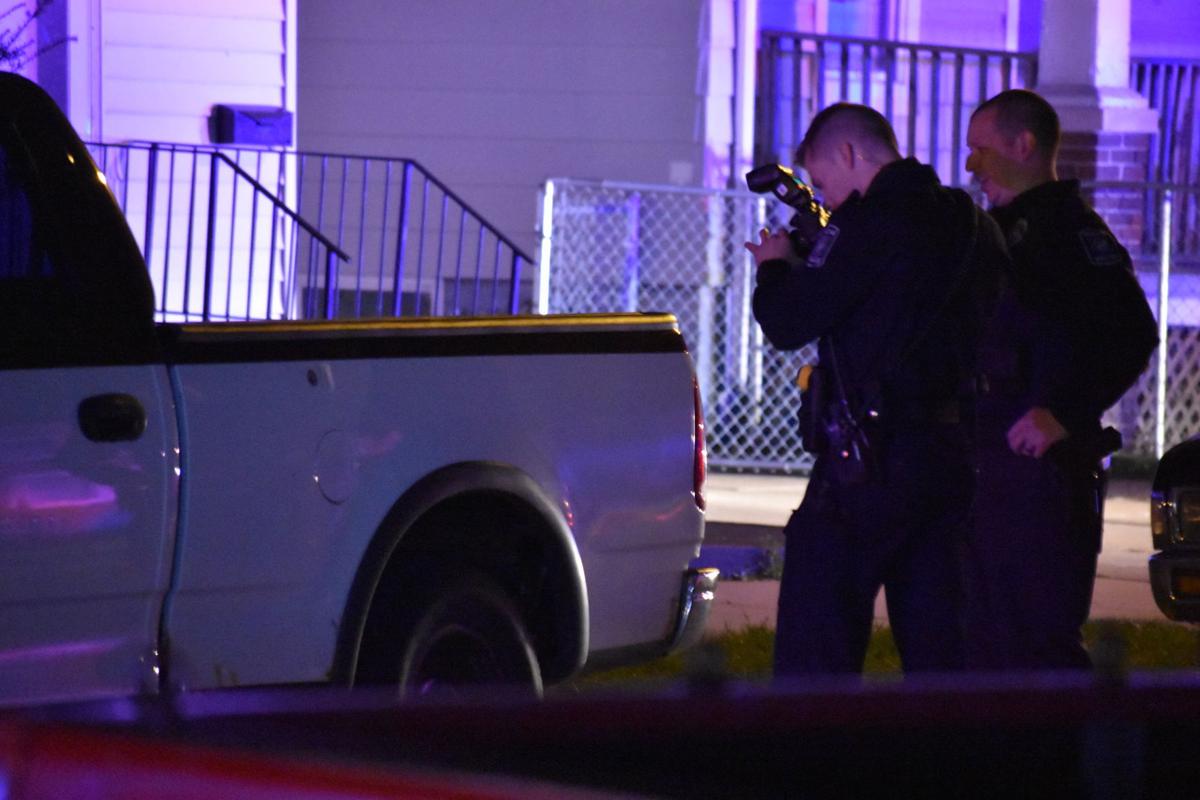 Racine police officers mark and photograph a bullet hole in the fender of a pickup truck April 19. Police said two vehicles were hit by gunfire at 9:18 p.m. in the 1600 block of Packard Ave. Officers located the suspect’s vehicle, and the driver William Henderson was arrested after a short pursuit.

RACINE — Gun violence piercing the silence of the night and, in some cases residents’ windows, has been a rallying cry for those living with the incidents in their Uptown neighborhood.

“If the neighbors continue to get to know one another, I think the good is going to overwrite the bad we’re having right now,” Feil said.

Feil wants to organize a block party to get more residents together to strengthen the ties and push out the violence.

Racine police Officer Bryant Petersen told the group that police have seen an uptick in shots-fired calls over the past month.

“April has been a very busy month,” Petersen said. “A lot of it is our hybrid street gangs shooting. They’re not random. They are targeted at specific people and places. We’re working on each one of these as they come.”

“It helps deter crime and captures anything that would happen. We want to get this location at the top of the list,” Petersen said.

Richard Bertelsen, who has lived in the 1600 block of Boyd Avenue for nearly five decades, is determined to carry on, even after he and his wife were awakened by 10 gunshots that riddled the front of his house April 26. One bullet went through his front window and landed on the couch.

“I think they got the house mixed up because I can’t think of anything I’ve done would have caused anyone to do this to me,” Bertelsen said. “I think they made a mistake. I hope it is an isolated thing and we’re not in any danger.”

The Racine police gang unit Friday teamed with the department’s special operations and community policing to round up two teens police said lived nearby and were wanted for a shooting in the 400 block of North Memorial Drive on April 22.

Jordan Jones, 18, of the 1700 block of Boyd Avenue and Isaiah McGlorn, 18, of the 1200 block of Erie Street, are charged with attempted first-degree intentional homicide, and additional felonies for recklessly endangering safety, after shooting another man in the leg; police said it was gang-related.

“Hopefully, they won’t be seeing them for a while and, hopefully, alleviate some of the issues in the neighborhood,” Petersen said.

Just blocks away from the COP house, Packard Avenue has had a series of shots-fired incidents, including one Saturday night where the shooter is still at large.

Joann Reed, who watches her three young grandchildren in the family home they’ve had for decades, said she is fed up with the gunfire and doesn’t want them hit. She said this year’s incidents of gunfire began with three incidents in a row the week after Easter; she’s concerned about a long summer.

“Summer is not even here yet,” Reed said. “Last year, my kids were cleaning up the block and someone came along and took a shot at them. Enough is enough.”

Reed said things will get better if they can control not only the gunfire but abandoned homes, loud music, kids out at night and the negative associations with her block found online.

Just down the street, on April 19, bullets hit two vehicles, which led officers to pursue and arrest William Henderson, 25, of Kenosha.

Henderson is charged with possession of a firearm by a felon — as a party to the crime, four counts of second-degree recklessly endangering safety, and obstructing an officer. If convicted of the most serious charge, Henderson could be sentenced to five years in prison.

Susan Feehrer, program director for the Racine Neighborhood Watch Inc., said residents sticking together after the gun violence is why the program exists.

“The group is just one example of how block watches empower people who share the same neighborhood to be safe, strong and connected,” Feehrer said. “For the betterment of the neighborhood, they discuss what’s going on, learn from each other and together problem-solve.”

Boyd Avenue resident Aaron Mortensen, who attended the meeting, said he’s not concerned about the uptick in gunfire because of his block’s camaraderie and the response from the Police Department.

“The Police Department has been phenomenal. The information, their response times to incidents ... you couldn’t ask for anything better right now,” Mortensen said. “The night of the shooting it was rainy, miserable and cold and they were out there for hours looking and searching.”

"If the neighbors continue to get to know one another, I think the good is going to overwrite the bad we're having right now."

"I want my grandchildren to go outside and know that's it's OK."

Homicide victim reportedly shot on porch while on his phone

RACINE — The grieving sister of Harry Canady Jr. sat Thursday next to the porch where her brother was gunned down less than a week ago in the …

RACINE — Racine Police have released the name of the man they said is wanted in connection to the death of Harry Canady Jr., who was found sho…

RACINE — Two alleged members of a gang have been charged with attempted homicide in an April shooting.

RACINE — A man has been charged following an incident of gunfire on Tuesday in the 1600 block of Packard Avenue, where two vehicles were struck.

RACINE — Police responded to a shots fired call in the 1600 block of Boyd Avenue around 10:30 p.m. Wednesday, according to Racine Police Depar…

RACINE — Police responded to two shots fired calls on Easter Sunday, including one in which a victim was hit, according to Racine Police Depar…

A resident in the 1600 block of Boyd Avenue said he found 10 bullet holes around the front of his home, including this one through his front window, after someone opened fire April 26 while he and his wife slept.

Racine police officers mark and photograph a bullet hole in the fender of a pickup truck April 19. Police said two vehicles were hit by gunfire at 9:18 p.m. in the 1600 block of Packard Ave. Officers located the suspect’s vehicle, and the driver William Henderson was arrested after a short pursuit.