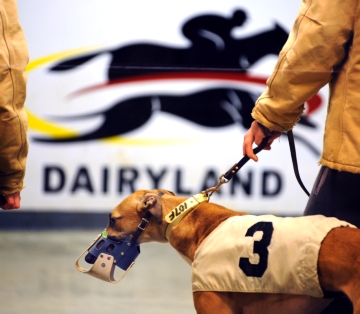 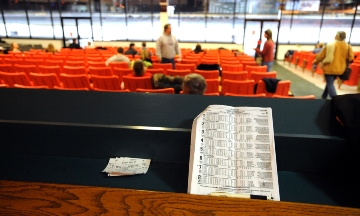 A bettor's annotated program and betting slips provide a foreground to the first-level grandstand on Thursday, December 31, 2009 evening at Dairyland Greyhound Park. Dairyland, located in Kenosha, had its final post time on Thursday, December 31, 2009. The dog track opened in June 1990. / Scott Anderson scott.anderson@journaltimes.com Buy this Photo at jtreprints.com
LINDSAY FIORI

The dog track, which has operated in Kenosha since June 1990, closed its doors after Thursday night's races and New Year's Eve party because financial reasons made it impossible to keep the track open into the new year.

"We've been here for 10 years and we're not leaving," said Mary Sitman, pounding her fist on a table. Sitman, 64, of Kenosha, came to the track five days a week with her husband, Robert Sitman, 67. The couple said they did well and kept coming back to the track for the winnings and because they enjoy the friendly staff.

"You get to know a lot of the people and the workers," Mary Sitman said. "I feel bad for them all losing their jobs."

Eugene Walker, 48, of Milwaukee, said he would also miss the workers. He came to the track at least every other day but said he will now have to go much farther for his betting.

Others at Dairyland, 5522 104th Ave., said they showed up Thursday just to see the track's final races. About 1,800 people were on hand for the first race of the evening at 7:15 p.m., said track General Manager Bill Apgar.

Bob and Judy Golab of Franklin Park, Ill., came for New Year's Eve and because it was "the last night."

"I'll save money but I'll miss it," said Bob Golab, 59, adding that he liked the cozy atmosphere of Dairyland where patrons can sit very near windows looking over the racing track.

Bob Russell was sitting near those windows Thursday with his wife and two children. They came to see the dogs and for the New Year's Eve buffet. Russell, 51, of Genoa City, said he came to the track throughout the year, but his children had never been before.

"It's interesting to see something run besides horses," said 15-year-old Megan Russell, "and how it all works and learning about the stats."

The family didn't know where else they would go for similar entertainment. Dairyland was the last of the state's five original greyhound racing parks.

Dairyland closed because it has lost money the past four years and in the last year both attendance and also betting dropped significantly, officials said.

The track's more than 700 dogs will end up racing at a track in another state, returned to their owners or adopted. The Dairyland property and facility are under an option agreement with the Menominee Tribe, which means they have an option to purchase the property if they get approval for a casino project proposed for the property, Apgar said.

He could not say when the option agreement expires.

"If they put a casino in," Bob Russell said, "I might come out for that."

A bettor's annotated program and betting slips provide a foreground to the first-level grandstand on Thursday, December 31, 2009 evening at Dairyland Greyhound Park. Dairyland, located in Kenosha, had its final post time on Thursday, December 31, 2009. The dog track opened in June 1990. / Scott Anderson scott.anderson@journaltimes.com Buy this Photo at jtreprints.com
© Copyright 2021 The Journal Times, 212 Fourth St. Racine, WI | Terms of Use | Privacy Policy
Powered by BLOX Content Management System from TownNews.com.
You don't have any notifications.