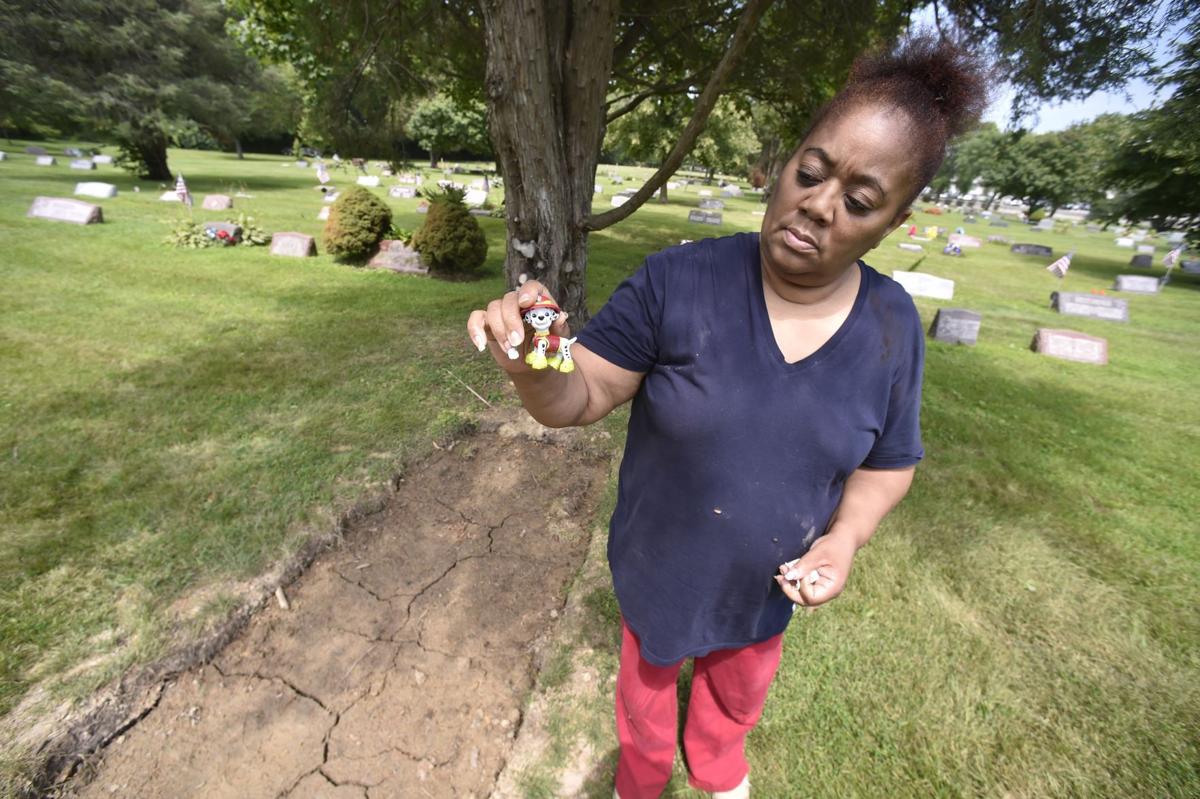 While visiting the unmarked grave of her grandson Jere-Miah Pitt, who was shot to death on July 12, Lisa Thomas finds a Paw Patrol character left behind from his cartoon-themed funeral. She’s now fighting for custody of his two young brothers after the county removed them from her home on Aug. 4. 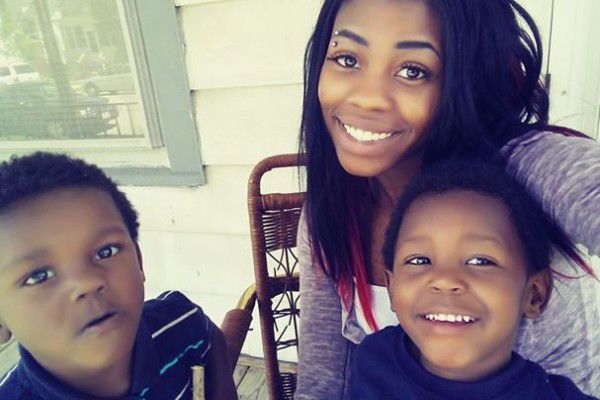 Lakia Russell, 23, who is enrolled in a GED course, is looking for a job and is taking parenting classes with the hope to get custody of her son Sa’onee Pitt, 2 and Ayden Oliver, 4 (not pictured), following the death of Jere’Miah Pitt, who shot himself July 12 after a loaded weapon was left out in the home.

RACINE — The grandmother of the 3-year-old Racine boy shot to death last month is pleading with the county to return his two young brothers to her after removing them from her home last week.

Racine resident Lisa Thomas, 53, who is on disability, said she’s trying to pull the family together in the face of unspeakable tragedy.

“The county should be offering to help me, not treat me like a criminal,” Thomas said.

Child Protective Services placed 2-year-old Sa’onee Pitt in her care on July 12 when his brother Jere’Miah Pitt was found dead with a bullet wound to the chest in a duplex in the 1800 block of Howe Street.

Their father, 30-year-old Jeffrey L. Pitt Jr., is accused of taking shots of alcohol before falling asleep with Sa’onee and Jere’Miah with a loaded gun in his waistband. Sometime overnight, police suspect the 3-year-old shot himself.

Pitt is charged with first-degree reckless homicide, first-degree recklessly endangering safety and possession of a firearm. Pitt’s brother-in-law, Laquan L. Russell, 27, was also charged in the incident. He is facing charges of resisting/obstructing an officer and harboring or aiding a felon. Thomas said she’s raised 12 children of her own so it was natural for Child Protective Service to place the toddler in her care.

Kerry Milkie, manager of the Youth and Family Division of the county’s Human Services Department, said she is unable to discuss case specifics due to confidentiality laws.

Under Wisconsin State Statutes and with the guidance of the State’s Access and Initial Assessment Standards, children are removed from their homes if the conditions are unsafe and/or there is not a protective parent who can provide care and the department is unable to develop a protective plan with the family to ensure safety.

Milkie said that according to policy, if a parent or caregiver is not around and unavailable it could be considered “neglect.” Thomas said rather it is CPS who is neglectful.

“Right now it’s neglect on the part of CPS. If you can’t reach someone on the phone the next step is to pay them a visit,” Thomas said. “I did not get a warning or a final warning. They showed up and I was playing with the kids. They said ‘we tried to call you numerous times and got no reply.’ I showed them my phone and they were not on there (the call log).”

From July 12 to when they were taken on Aug. 4, Thomas said she only had three interactions with CPS; when they originally placed the toddler, to inquiry about his mother Lakia Russell and when they came with Racine Police officers to take the child back.

“Why did they need to have police officers here? They were trying to intimidate me,” Thomas said.

“We respond when requested by CPS. They usually request us if they feel there may be a problem so we go to there to perform our main function, keep the peace,” Malacara said.

Thomas said CPS informed her that they were not only taking the toddler, but also Russell’s other son, 4-year-old Ayden Oliver, who is no relation to Jeff Pitt.

“I’ve had him since February and he’s not a part of the situation ... CPS told me they were taking Ayden because he’s at risk of being a fatality. That’s why they said they snatched him,” Thomas said.

CPS ignored her teenage children at the home at the time of the interaction including Thomas’s 12-year-old granddaughter from Madison who was staying for the summer.

“I think it’s deceitful,” Thomas said. “They should be trying to keep these children with their families.”

Thomas said the “frivolous” seizure of her grandchildren is one reason why the county is facing a foster parent crisis.

“How can they say they need foster parents when they do this to me so quickly without warning?” Thomas said.

According to county data, 366 children are currently placed in licensed foster homes. That number is up from last month when they averaged 259 children daily in the foster care system.

“About 30 percent of our current placements are out of county,” Milkie said.

Thomas said that her two grandchildren are also out of county and are now an hour away living with two different families.

Lakia Russell, 23, is now living in Racine, but believes her history of domestic violence with the father may have lead CPS to consider her “an unfit mother,” she said.

“The Pitt family is accusing me of doing drugs but the (authorities) made me take a drug test and it was negative,” Russell said.

In June, Russell was found guilty of disorderly conduct in Racine County Circuit Court but she said she’s changing her life to focus on her children.

Russell said she misses her boys and is now enrolled in a GED program, is looking for a job and takes a parenting class to prepare to get her children back someday.

On Thursday, Thomas visited Jere’Miah’s unmarked grave at Graceland Cemetery in Racine where she found a Paw Patrol figure in the grass left over from his cartoon-themed funeral.

“He’s buried a couple of rows from my father. He’s watching over him now,” Thomas said. “The last time I saw Jere’Miah he said ‘good-bye’ and gave me a kiss. The little boy never gives me kisses. He held me tight and kissed me right here on the cheek. The next time I saw him they were taking his body away.”

Thomas hopes an attorney might take up a potential lawsuit against CPS so she can pull her family back together.

“I’ve grown all my kids up and I was willing to take on two more little ones,” Thomas said. “I haven’t asked the community for help. I’m determined to do it on my own.”

"I've grown all my kids up and I was willing to take on two more little ones. I haven't asked the community for help. I'm determined to do it on my own." — Lisa Thomas, mother and grandmother

RACINE — One year and one day after the death of his son, a Racine County man, dressed in an orange jail jumpsuit, tearfully addressed the court.

RACINE — The father of a toddler who died from a gunshot wound last week has been charged in connection with the shooting.

RACINE — Investigators and the family of a 3-year-old boy shot to death Wednesday at a duplex in the 1800 block of Howe Street are seeking answers.

While visiting the unmarked grave of her grandson Jere-Miah Pitt, who was shot to death on July 12, Lisa Thomas finds a Paw Patrol character left behind from his cartoon-themed funeral. She’s now fighting for custody of his two young brothers after the county removed them from her home on Aug. 4.

Lakia Russell, 23, who is enrolled in a GED course, is looking for a job and is taking parenting classes with the hope to get custody of her son Sa’onee Pitt, 2 and Ayden Oliver, 4 (not pictured), following the death of Jere’Miah Pitt, who shot himself July 12 after a loaded weapon was left out in the home.