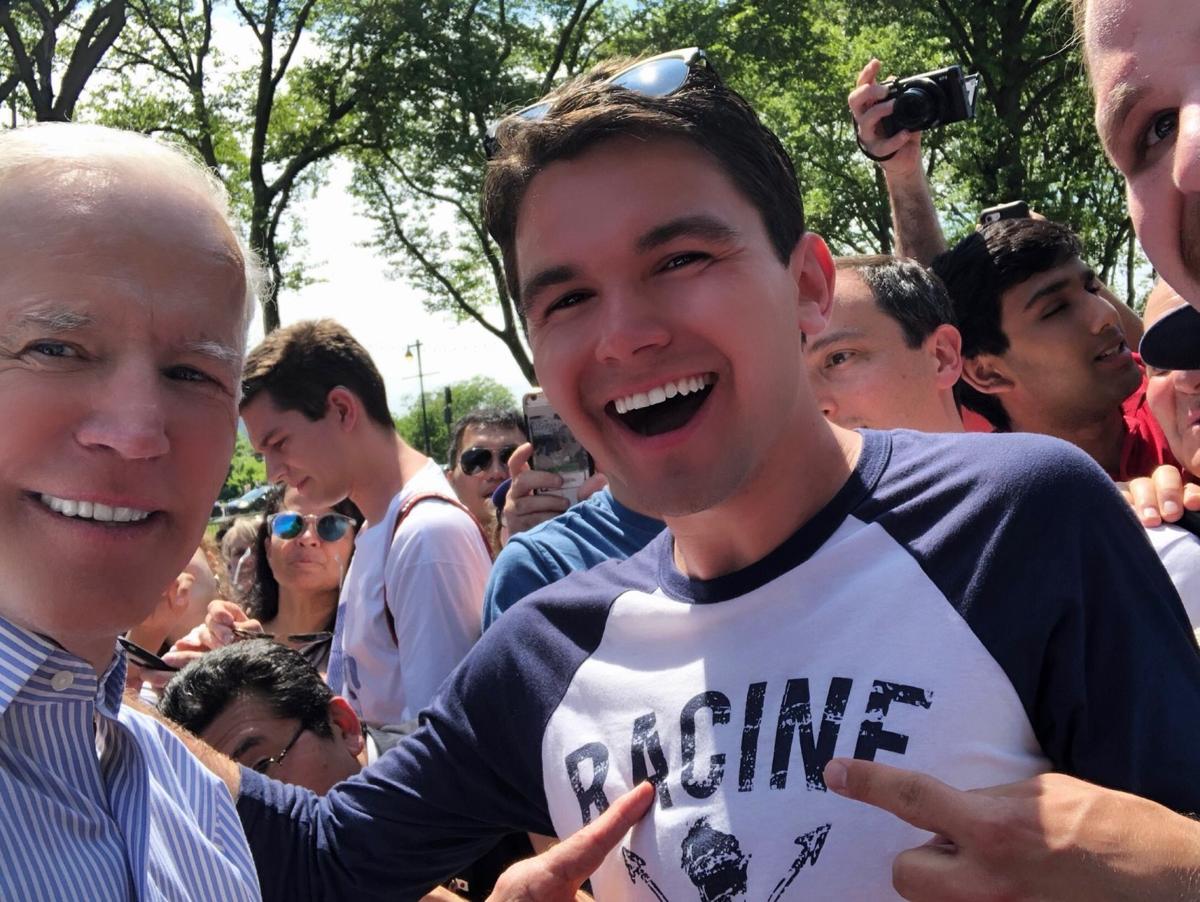 Racine Alderman Trevor Jung, at right, smiles with presumptive Democratic presidential candidate Joe Biden. This week, Jung is set to cast a ballot for Biden at the virtual Democratic National Convention, during which Jung is a delegate for the Racine County Democratic Party. 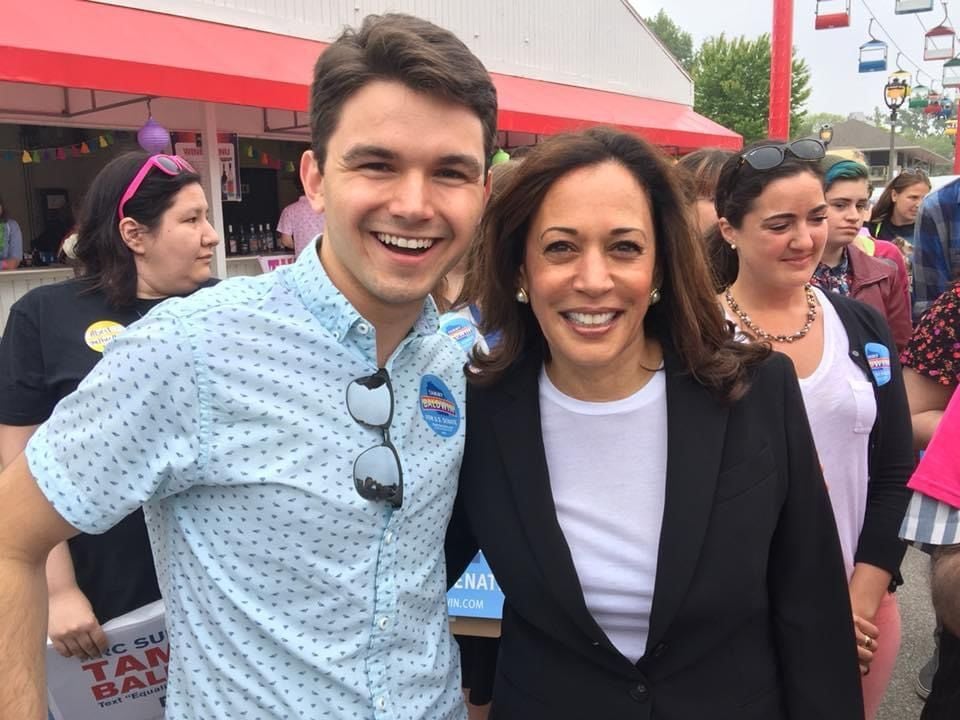 Trevor Jung, left, a Racine alderman and a Racine County delegate to the Democratic National Convention, smiles for a photo with U.S. Sen. Kamala Harris, D-Calif., whom presumptive Democratic presidential nominee Joe Biden has selected as his running mate.

RACINE — Trevor Jung drove from Racine to Philadelphia to witness the kickoff of Joe Biden’s presidential campaign in April 2019. Unlike a large proportion of current Biden supporters, Jung, a City of Racine alderman, has been on board with the former vice president since the beginning of his run.

“He’s going to bring character back to the White House that is so desperately needed,” Jung said of his chosen candidate.

“The Democratic Party is unified around Joe Biden,” he added, even though polling from Pew Research shows that the No. 1 reason 56% of likely Biden voters are voting for him because “He is not (President Donald) Trump.”

Jung, along with Racine County Register of Deeds Connie Cobb Madsen, was supposed to be representing the Racine County Democratic Party at the Fiserv Forum in Milwaukee this week during the Democratic National Convention. Jung and Madsen were picked as the county party’s delegates in May, before it was confirmed that that the DNC would be almost entirely virtual.

Instead of heading up to Milwaukee this week, Jung and Cobb Madsen are sitting at home in their respective living rooms in front of computer screens. Rather than gathering and cheering with thousands of other Democrats and Biden supporters, they have their webcams going and video-chat programs open.

Rather than casting ballots in person, they will vote through email. The DNC has said that voting online, despite the chances for hacking, is still safe because ballots are not secret. So, if the party needs to confirm a ballot, they can just ask the delegate who cast the ballot to confirm. Ballots are created when each delegate fills out a PDF form.

Jung expects a lot of the conversations to be focused around “How do we develop a more just society?”

“I’m still excited about it,” Cobb Madsen said. “Even if they aren’t meeting in person, the work is still going to be done.”

There’s still excitement within the party, she said: “It’s hard not being face-to-face … but all the thunder is still there.”

After being rescheduled from July to this week, the DNC began at 8:30 a.m. Monday and is scheduled to end Thursday night. The Republican National Convention, also virtual, is scheduled to kick off Aug. 24.

In a four-thousand-word feature published Wednesday by Politico on Robin Vos, the Racine County Republican is called a “shadow governor” in Wisconsin for how he uses his power as Assembly speaker to stifle the actions of Gov. Tony Evers.

An email signed by the leader of a Republican-ordered investigation into the 2020 presidential election in Wisconsin sent to county clerks raised security concerns about its authenticity.

During an interview last week, Assembly Speaker Robin Vos, R-Rochester, said that the reason two former police detectives, who had been tabbed to lead Wisconsin's election investigation, had quit was “simple.”

Republicans, elections experts inside and outside of Wisconsin say state's probe is flawed

Former Republican officeholders and elections experts from within and outside of Wisconsin said Wednesday that the GOP-ordered investigation into the 2020 presidential election in Wisconsin lacks credibility, transparency and raises security risks and legal concerns.

Racine Alderman Trevor Jung, at right, smiles with presumptive Democratic presidential candidate Joe Biden. This week, Jung is set to cast a ballot for Biden at the virtual Democratic National Convention, during which Jung is a delegate for the Racine County Democratic Party.

Trevor Jung, left, a Racine alderman and a Racine County delegate to the Democratic National Convention, smiles for a photo with U.S. Sen. Kamala Harris, D-Calif., whom presumptive Democratic presidential nominee Joe Biden has selected as his running mate. 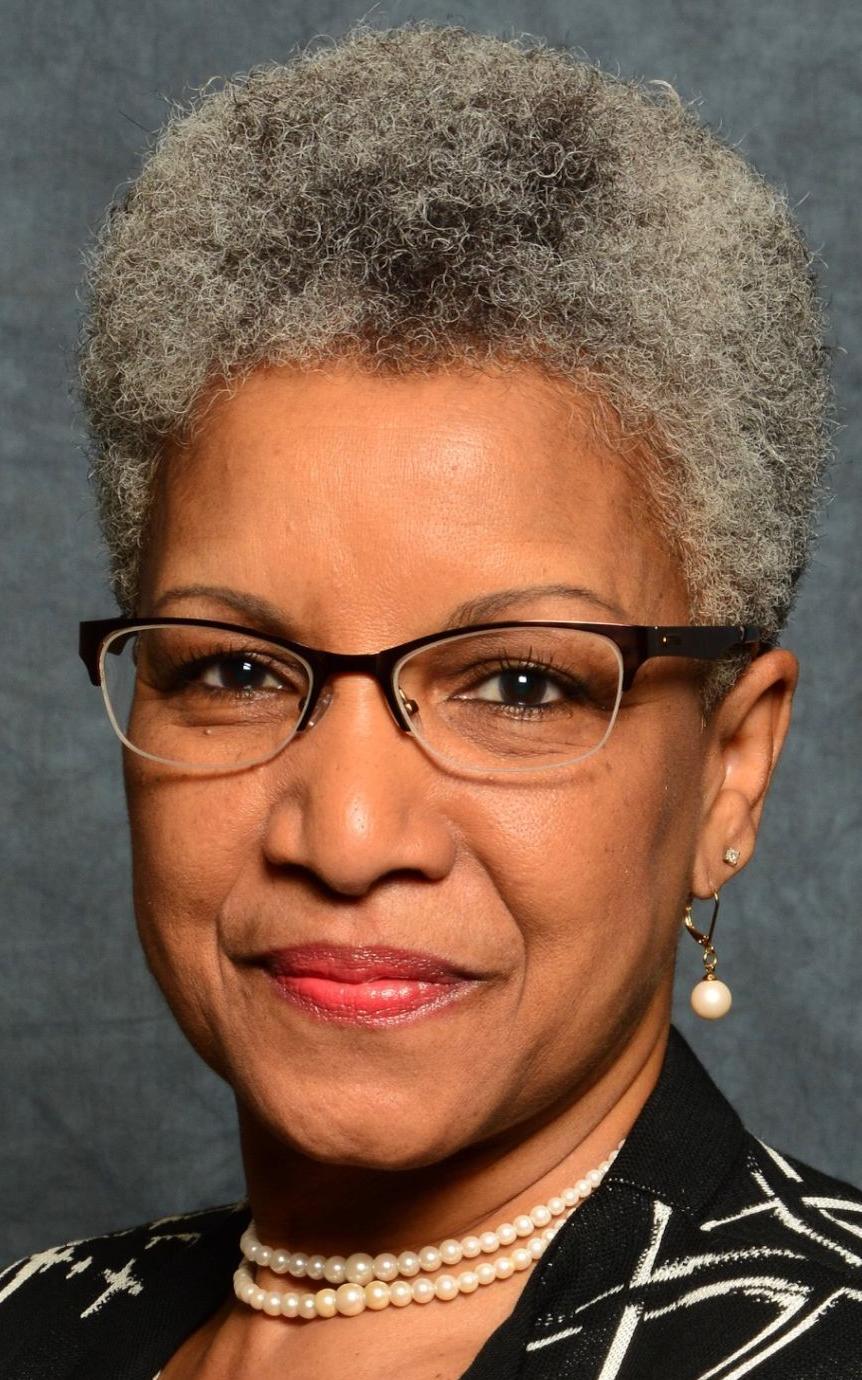