MADISON — Gov. Tony Evers said Wednesday that he has “no regrets” about how the state responded to protests that broke out in Kenosha following the police shooting of Jacob Blake.

Blake, who is Black, was shot as many as seven times in the back by white Kenosha police officer Rusten Sheskey on Aug. 23, sparking several night nights of protests and unrest that culminated with the shootings of three demonstrators (two of whom died) by an armed civilian preceding visits from both major parties’ nominees for president: Republican President Donald Trump and Democrat Joe Biden.

Evers called out the Wisconsin National Guard early the morning of Aug. 24. The Democratic governor turned down an offer made Aug. 25 from the White House to send federal U.S. Department of Homeland Security troops, although other federal law enforcement agents — from the FBI; the Bureau of Alcohol, Tobacco, Firearms and Explosives; and other organizations — were already in the city.

Trump criticized Evers’ response, urging him to activate the National Guard after he had already done so.

“He made a pitch about, you know, ‘We have to get the National Guard on the ground,’” Evers said. “I said, ‘They already are. We’ve met every request.’”

A day later, after the shootings of three demonstrators, Evers again spoke with Trump; the governor said they agreed to have the White House send other federal assistance, including officers from the FBI and U.S. Marshals. Kyle Rittenhouse, a 17-year-old Trump supporter from Illinois, is charged with shooting the demonstrators.

“To say that we could have done anything different as it relates to working with the White House, I have no regrets because the only thing I said no to was Homeland Security and I knew that would not work out because of what I saw in Portland,” Evers said, referring to ongoing unrest in that Oregon city between protesters and federal troops that has surpassed 100 days of continuous demonstrations.

His appearance came as Marquette University Law School released its first poll since the shooting of Blake, which left the 29-year-old paralyzed.

The poll of Wisconsin registered voters showed that 47% of respondents approve of protests against police shootings, on par with 48% seen in early August and down from 61% in June. Attitudes about the Black Lives Matter movement were unchanged from August, with 49% having a favorable view and 37% unfavorable.

The governor also called on Republicans who control the Legislature to “step up” and take action on criminal justice reform. Evers called a special session last week on nine policing bills, but Republicans took no action.

Both Trump and Democratic challenger Joe Biden came to Kenosha last week. The Marquette poll showed that the public’s view of Trump’s handling of protests increased from 32% in August to 36% in September, but a majority — 54% — still disapproved.

Trump’s overall approval rating was 44%, unchanged from the month before.

The poll also showed little movement in the presidential race, with Biden having 47% support of likely voters and Trump with 43%. That mirrors many other recent polls.

Street preacher on the mic

A man and woman hold hands in prayer

Photos: Scenes from Joe Biden's visit to Kenosha on Thursday

Democratic presidential candidate Joe Biden visited Kenosha on Thursday and met with the family of Jacob Blake, a Black man who was shot and s…

President Trump visited Kenosha on Tuesday, in the wake of a police shooting that spurred days of rioting. A police officer shot Jacob Blake, … 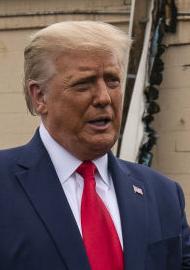