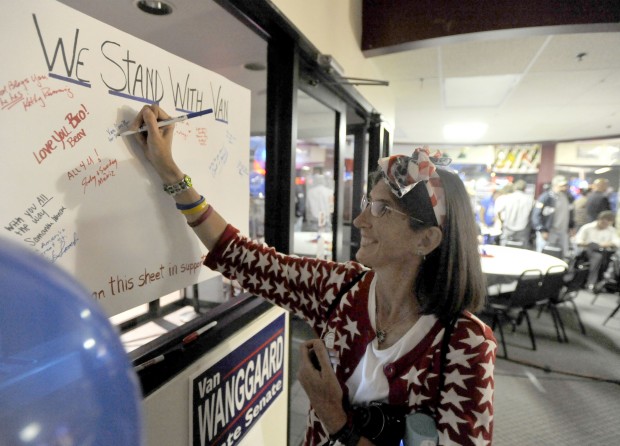 Emily Veit signs a "We Stand with Van" sign as she waits for recall election results to come in Tuesday evening, June 5, 2012, during an election party at Buona Vita. Gregory Shaver Gregory.Shaver@journaltimes.com 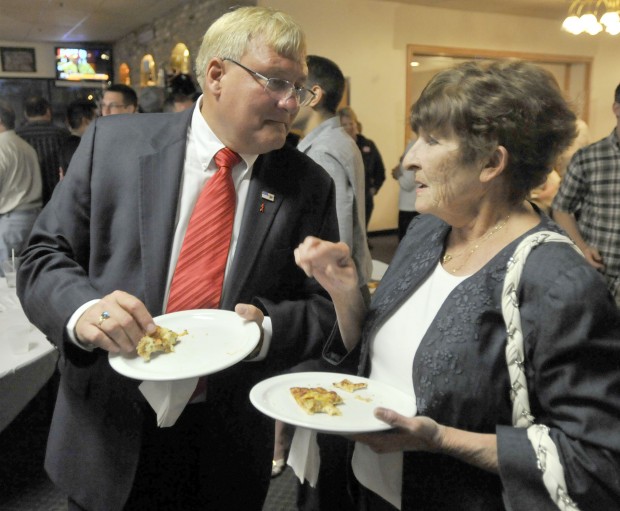 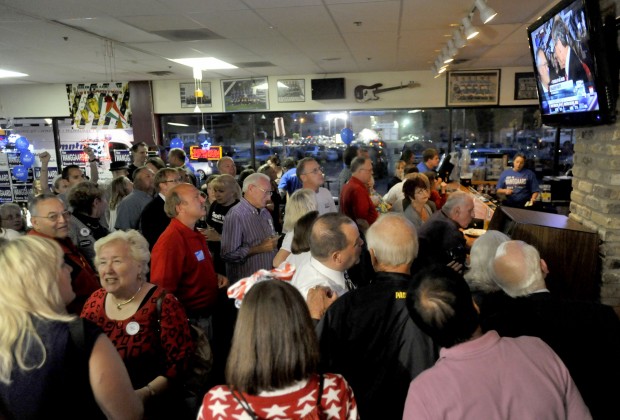 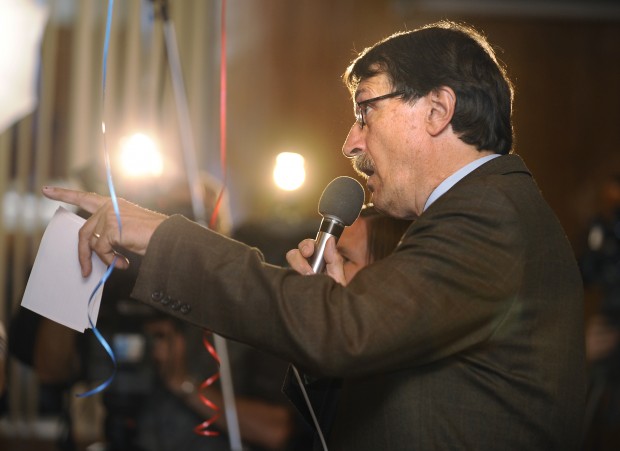 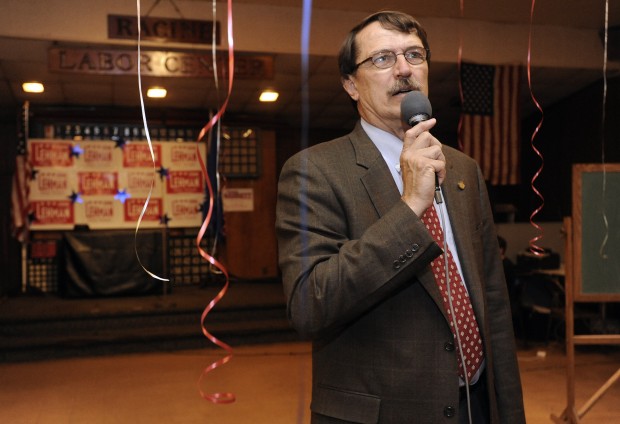 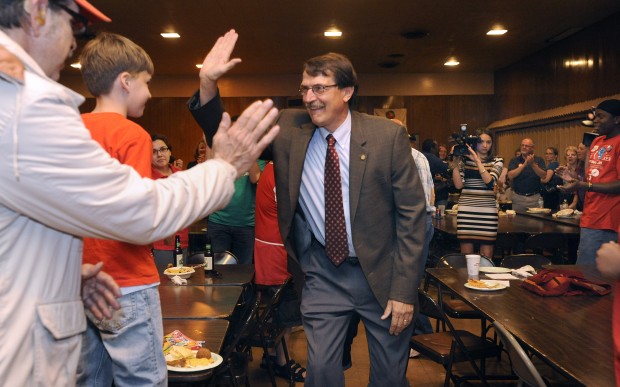 Democratic State Senate candidate John Lehman gives a high-five to a child during Lehman's entrance into the main ballroom while surrounded by an audience gathered at the Racine Labor Center on Tuesday night, June 5, 2012. Lehman ran against Republican State Senator Van Wanggaard (R-Racine) in a recall election. / Scott Anderson scott.anderson@journaltimes.com Buy this Photo at jtreprints.com 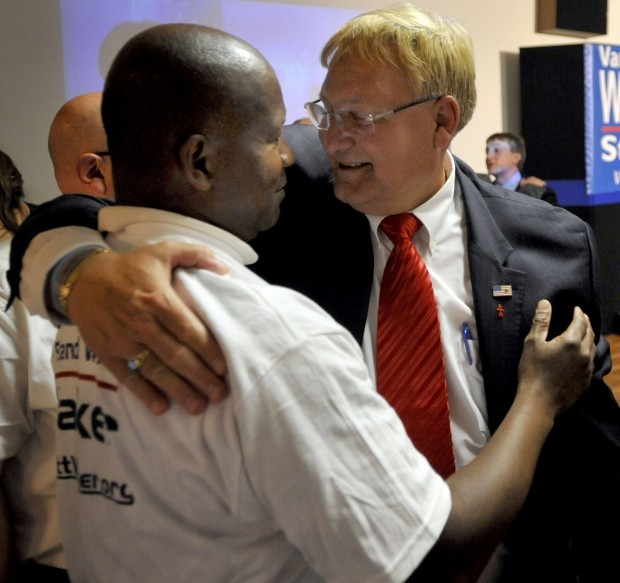 Van Wanggaard hugs volunteer Richard Frazier of Caledonia, after he spoke to the crowd as they wait for recall election results to come in Tuesday evening, June 5, 2012, during an election party at Buona Vita Pizzeria. Gregory Shaver Gregory.Shaver@journaltimes.com 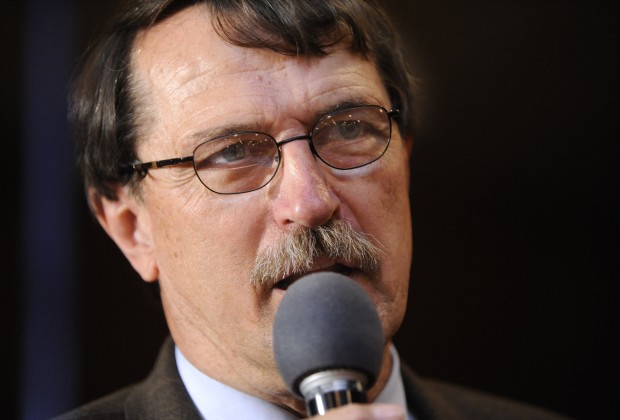 RACINE - Despite the late hour, the crowd of roughly 30 at the Racine Labor Center erupted into loud cheers and whistles at former Sen. John Lehman’s announcement declaring victory over state Sen. Van Wanggaard, R-Racine, in their tight bid for the 21st Senate seat.

“This victory is really for them,” said Lehman, who had repeatedly thanked the volunteers for their “selfless campaign” in recall efforts.

Both Wanggaard and Lehman had predicted Tuesday would be a tight race, and it was.

Lehman declared victory by 1 a.m. Wednesday, while Wanggaard hadn’t conceded, saying: “We believe that the numbers are strong enough that we will prevail even if they do a recount.”

The crowd of about 30 supporters that remained at the Racine Labor Center, 2100 Layard Ave., erupted into loud cheers and whistles at his announcement.

“John, awesome, awesome,” Assembly Minority Leader Peter Barca, D-Kenosha, told Lehman after he declared victory. The two shook hands and Barca exclaimed with two fist pumps: “Thanks for bringing us back to victory. Thank you. A Democratic Senate, all right!”

Heading into Tuesday, the GOP controlled the state Assembly and was fighting to regain control of the state Senate, which was divided evenly at 16-16 with one vacant seat in the 29th district in the aftermath of the outrage that ensued in the Capitol last year over Gov. Scott Walker’s Act 10.

Lehman likened his Wednesday victory that would turn the Senate from red to blue to that of former state Sen. Kim Plache, D-Racine, who won the seat from Republican incumbent George Petak in a similar 1996 recall.

Lehman hoped for both parties to come together to work for the people, touting his 14 years in the state Legislature to be the person to help accomplish that bridge.

Lee Hedgepeth, a staff member of the Kenosha Education Association, told The Journal Times the 21st Senate District is a working-class district and “they deserve someone who will stand and fight for them” like Lehman.

“What we’re really trying to do is remember the people of Racine,” Lehman said. “Try to get involved in the Legislature in a way that really brings jobs to Racine. That should be our first step.”

Wanggaard to wait and see

RACINE — While other Republicans watched their victories pile up Tuesday, state Sen. Van Wanggaard, R-Racine, and his supporters remained in suspense.

And they remained in that state right up to Wanggaard’s final words to his supporters. A little after midnight — less than an hour before vote totals showed John Lehman’s recall challenge had apparently succeeded — Wanggaard ended his election night party. At Buona Vita Pizzeria, 3701 Durand Ave., he dismissed and thanked his supporters and celebrated other Republican victories.

At that point in the night, Wanggaard held a 55 percent to 45 percent lead over Democratic challenger Lehman with just less than half, 47 percent, of the votes in.

“Well, I’ll tell you, we had really good night tonight,” Wanggaard began. “We have a governor that is in place, we have a lieutenant governor that’s in place,” and he also mentioned the victory by new Republican Sen. Jerry Petrowski in District 29.

At that point, Wanggaard said they would wait to see what the official vote numbers would be, and then “see what our options are in the morning.”

By about 1 a.m., as nearly complete results seemed to show a Lehman victory, Wanggaard spokesman Justin Phillips said, “There are some (results) that kind of stand out to us as outliers. We’re going to have to wait for official results.

“I don’t want to throw the other R word around of recount,” Phillips continued, “but if it comes to that, we’re going to have to see if those results hold up.”

Wanggaard spent most of the night in a private war room but emerged to address the room and talk to the news media about 9:15 p.m. At that point the large, boisterous and upbeat crowd broke into a chant of “Go, Van, go!”

At that time, with just 10 percent of the vote counted, Wanggaard held an impressive lead over Lehman, 63 percent to 37 percent.

Wanggaard then told The Journal Times he thought his team had run a good, positive campaign. Monday night they did a “debrief,” looking back to assess whether there was anything else they could have done and decided the answer was no.

Wanggaard said hundreds of volunteers had made phone calls or knocked on doors on his behalf on a regular basis. “Some people made more than 15,000 phone calls.”

Help came from outside his district; for example from the student Republican group at Marquette University, he said.

“We need to get Racine back the way it once was,” Wanggaard said — instead of having high unemployment, being a place of robust business.

He also said, “We need to get past this (recall election) and start working together on things.”

Among the faces in the crowd were former Racine Police Chief Kurt Wahlen and other police or retired police officers, former county executive Bill McReynolds and many business people.

A big cheer erupted when the words “Barrett concedes” appeared on the TV screen. But the night was far from over at that point for Wanggaard, with just 22 percent of the votes in his Senate district counted.

Wanggaard: 'We will evaluate our options'

Emily Veit signs a "We Stand with Van" sign as she waits for recall election results to come in Tuesday evening, June 5, 2012, during an election party at Buona Vita. Gregory Shaver Gregory.Shaver@journaltimes.com

Democratic State Senate candidate John Lehman gives a high-five to a child during Lehman's entrance into the main ballroom while surrounded by an audience gathered at the Racine Labor Center on Tuesday night, June 5, 2012. Lehman ran against Republican State Senator Van Wanggaard (R-Racine) in a recall election. / Scott Anderson scott.anderson@journaltimes.com Buy this Photo at jtreprints.com

Van Wanggaard hugs volunteer Richard Frazier of Caledonia, after he spoke to the crowd as they wait for recall election results to come in Tuesday evening, June 5, 2012, during an election party at Buona Vita Pizzeria. Gregory Shaver Gregory.Shaver@journaltimes.com