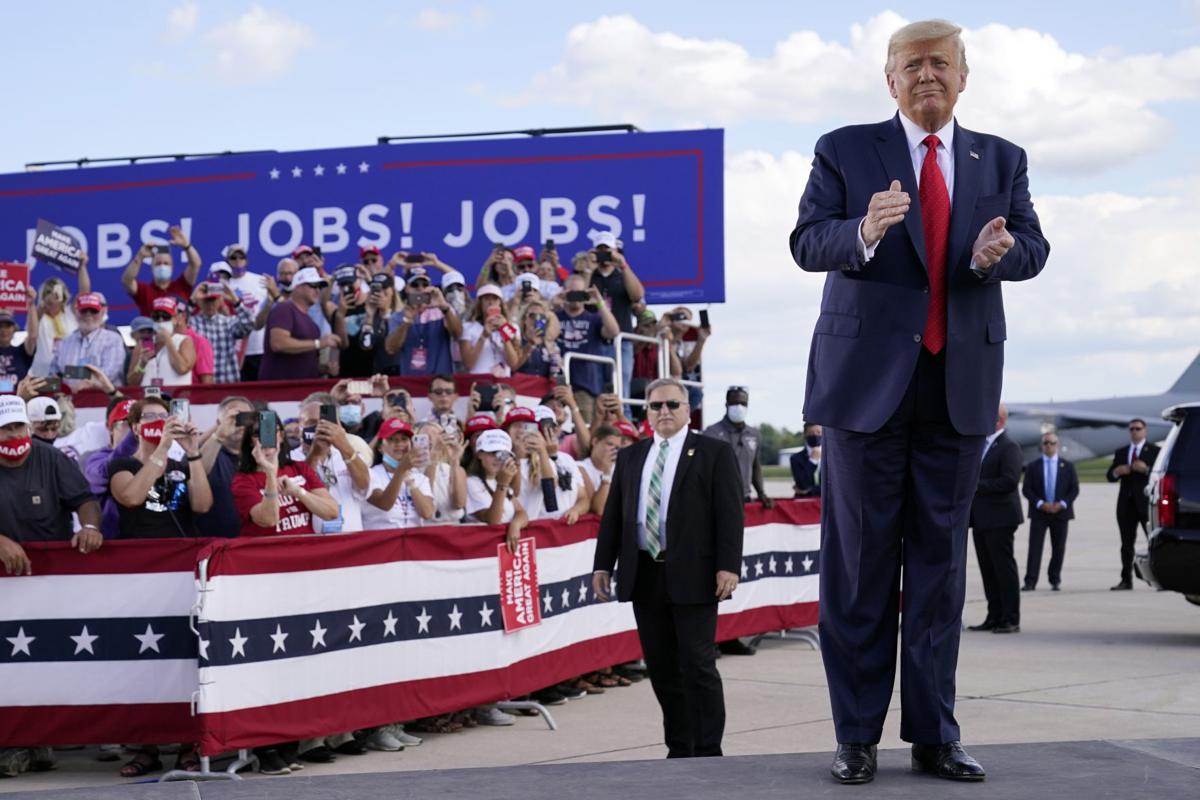 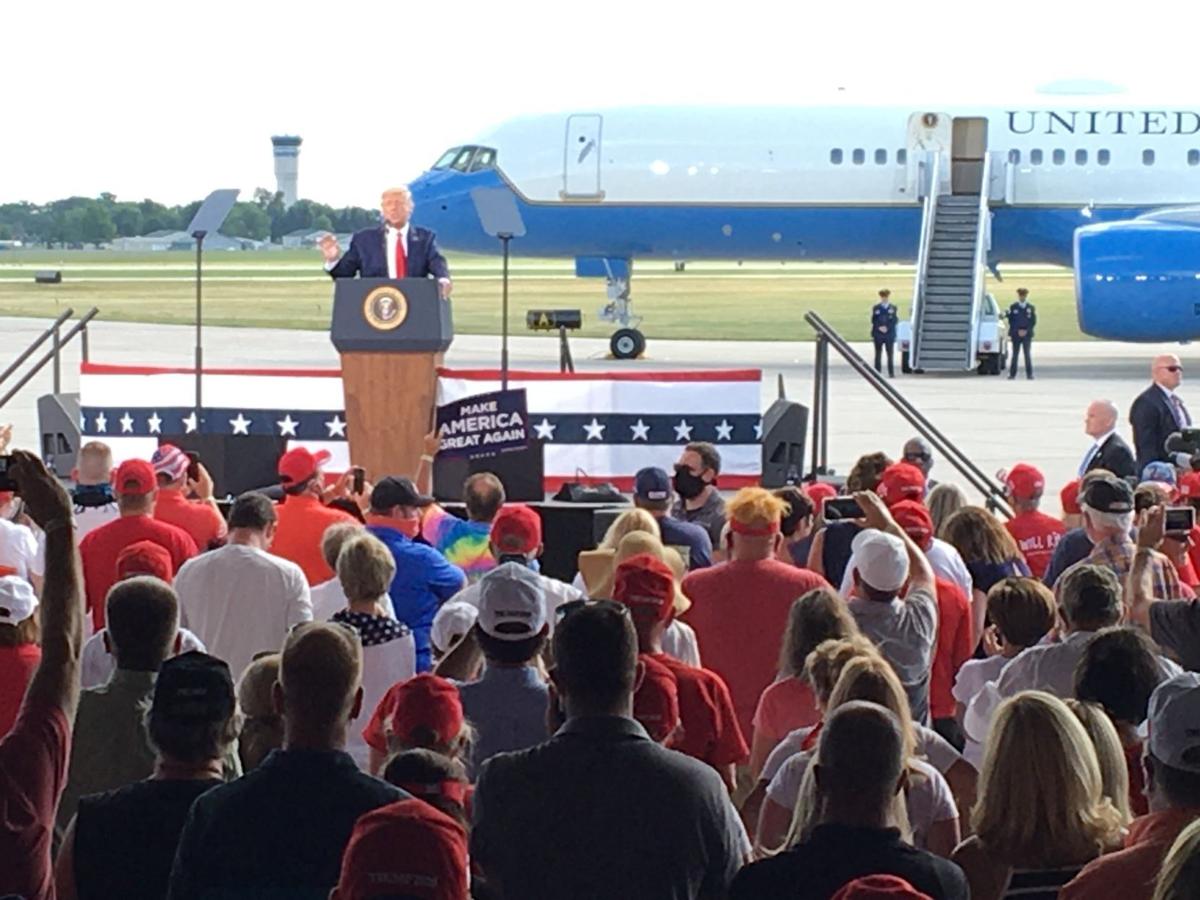 OSHKOSH — President Donald Trump spoke to a crowd of more than 100 at Oshkosh’s Wittman Regional Airport on Monday afternoon just minutes after he spoke in Minnesota as part of a quick Midwest campaign tour.

“This was supposed to be just a little small gathering,” the president joked in his opening remarks.

“We’re throwing a peaceful protest. That way we can do whatever we want,” he added, jabbing at protests following the death of George Floyd, while in Minneapolis police custody, that in some cases turned destructive and violent.

His depiction of a world where Joe Biden is elected is a doomsday scenario. “We’re going to fight for the life of our nation and civilization itself,” Trump said of the 2020 election, in which Wisconsin is a critical swing state.

Regarding a vaccine and other treatments for what the president refers to as “the China virus” — a term many Chinese-Americans have said is offensive — Trump said “you will be hearing some good news very, very soon.”

When it comes to the coronavirus, Trump claimed that “our numbers” are better than most other countries. According to official international data, the U.S.’s deaths per 100,000 people is 10th highest in the world and 12th highest over the past week.

Trump also continued fashioning himself as a regulation breaker. Monday morning, before his speeches in Oshkosh and also in Minnesota, Trump’s administration finalized a plan to allow oil drilling in what had been the Arctic National Wildlife Refuge in Alaska as part of the president’s effort to prevent the U.S. from relying on foreign energy.

He also bragged of approving the Keystone Access pipeline, an oil pipeline that was long beleaguered in bureaucracy and long-protested by Native American and environmental groups for both harming the Earth and for allegedly illegally taking their land.

The president claimed that Democrats want to “abolish American energy and make us reliant on foreign energy,” and that Biden and Harris want to “ban fossil fuels.” Neither of them have said they want to do that outright, but both have pushed for the U.S. to invest more in renewable energy, to try to use less environment-damaging sources of energy and to fine polluting companies.

Trump also said that the reason he recognized Jerusalem as Israel’s capital was “for the Evangelicals.”

“We moved the capital of Israel to Jerusalem. That’s for the Evangelicals ... The Evangelicals are more excited about that than the Jewish people,” Trump said, referring to how in December 2017 the Trump administration said it was no longer recognizing Tel Aviv as Israel’s capital and began moving the U.S. embassy in that country, a decision panned by the United Nations Security Council.

Evangelicals have been among Trump’s biggest supporters. As of June, according to the Pew Research Center, eight out of every 10 white Evangelical Americans say they will vote for Trump.

“Do you want defund and defame and dismantle the police? I don’t think so,” Trump said, getting cheers from the crowd.

Few elected Democrats in Washington, D.C. have actually advocated for this. Kamala Harris, Biden’s running mate, has been repeatedly criticized by progressives for having been too tough on crime when she was San Francisco’s district attorney.

“I think they’re purposefully trying ... to hide him from the voters so people don’t see how he’s outsourced his agenda to the radical left of his party,” Walker said. “Joe Biden’s hiding out back at home in Delaware.”

Walker added that a second Trump term would be good for Wisconsin.

Blocks from the airport, anti-Trump protesters gathered. Several held signs calling Trump a racist. Another massive sign read “We can’t breathe,” a common chant alluding to the officer-involved deaths of Eric Garner in 2014 and Floyd in May 2020.

Ryan Hamann, with the Coalition to March on the DNC, told a reporter from The Post-Crescent of Appleton: “It’s movements in the streets that ultimately win change.”

These Neanderthal bones are thousands of years older than previously thought

These Neanderthal bones are thousands of years older than previously thought 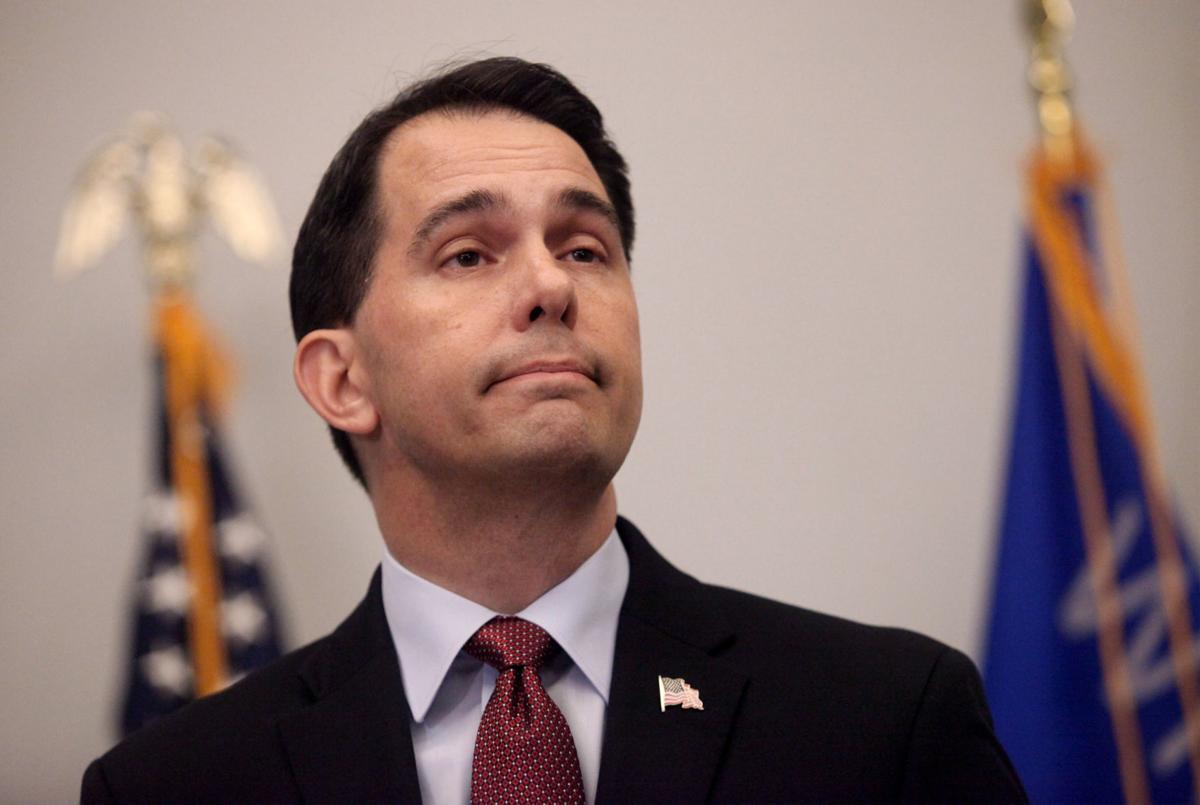