Angered over COVID-19 mandates, distrust of Joe Biden's win in the 2020 presidential election and what he sees as overreaches of government authority, a Republican is looking to unseat Assembly Speaker Robin Vos in a rare Republican primary in District 63. And the challenger is situating himself with those who have gone beyond Vos to cast doubt on the results of the 2020 presidential election.

“I'm running for office because I believe that we need real change in Wisconsin. I'm not a career politician, I'm a regular guy who's fed up with the way things are and wants to make a difference,” Steen said in a statement coinciding with his campaign announcement.

He has support from those who question Biden’s 2020 election win, including GOP gubernatorial candidate/state Rep. Tim Ramthun, who has tried to have Wisconsin pull back its 10 electoral votes cast for Biden despite that not being legal, and Republican lieutenant governor candidate Jonathan Wichmann.

"Help us #TossVos and end the corruption in Madison. Wisconsin, this is our chance to drain the swamp in 2022 so let’s make it happen," Wichmann said in a Facebook post supporting Steen, using the hashtag that has been used by some on both the right and the left as separate rallying cries to show opposition to the de facto leader of elected Republicans in Wisconsin.

District 63 includes most of Racine County outside of the City of Racine. Vos, a Burlington native who now lives in Rochester, has represented District 63 since 2005.

A new challenger has entered the arena

Steen would still be a longshot to defeat Vos in a primary, but he may figure to have a better chance than any Democrat in unseating the de facto leader of Republicans in the state Legislature.

In four contested elections since 2012, Democrats have never been within 16 points of unseating Vos.

However, if Steen or someone else in his position could generate enough support from the far right within the 63rd District, Vos could be eliminated before Democrats ever have a chance to challenge him in a final vote.

The Aug. 9 election primary in District 63 could become a test of the strength of election conspiracy theories among Republican voters.

Vos isn’t afraid of losing his seat. He noted in a Monday evening phone interview that the last time he had a challenger in the Republican primary, when he was challenged by Bryn Biemeck in 2014, Vos still won 89.5% of the vote.

Fully questioning Biden's election win could be a winner among conservative voters.

Polling from YouGov, conducted in December 2021 after Biden had been in the Oval Office for more than 10 months, found that while the majority (58%) of Americans believe Biden's win was legitimate:

As such, if Steen or another Republican could pull off an upset in the primary, a real test could follow:

After the Aug. 9 primary, the final election is scheduled for Nov. 8. The November election is expected to have a relatively high turnout as it coincides with statewide elections for governor, attorney general, treasurer and secretary of state. However, no Democrats have yet entered the race.

What's in a name?

Adam Steen’s full name is Kevin Adam Steen. But his father’s name was also Kevin, so he said he has gone as Adam his whole life. He will appear as Adam Steen on ballots.

Steen, who ran unsuccessfully for Congress in 2018 in a Republican primary that was won by Bryan Steil, said he was at least partially inspired to run by Donald Trump. Both Vos and Steen are vocal Trump supporters.

“The Republican Party is in a transition,” Steen said in a Tuesday morning phone interview. "There is a large shift that I guess started with, or was propagated by, Donald Trump."

Steen's website, steenforus.us, includes three videos, only one of which was created by his campaign.

In his campaign announcement video, Steen says “I grew up on a farm in Indiana. My parents were in the housing industry, so when we weren’t bailing hay or hauling blocks, we were cleaning up a job site.” He continues speaking about attending Maranatha Baptist University in Watertown, moving to Horicon and becoming a welder at John Deere before attending the University of Wisconsin-Madison, where he met his wife, with whom he has two daughters. He earned a degree in biological systems engineering from UW-Madison in 2009 and told The Journal Times he now lives in Rochester.

The Steen and Vos homes are less than a mile apart.

The second video on Steen’s website was of Assembly Speaker Robin Vos’ appearance at a Racine meeting of H.O.T. Government, a group that has repeatedly questioned the 2020 presidential election results and railed against COVID-related mandates. H.O.T. Government has shown its support for Steen.

The third video is the 84-minute production from Liberty First, made up primarily of a speech by Krisanne Hall, a self-described “Constitutionalist attorney” who has fought vaccine mandates. It opens with Hall saying: “We've had an undisciplined government for decades. And they don’t like it that we’re now waking up. They don’t like it that we’re now demanding to be heard. And we’ve raised a spoiled brat representative government that needs to be taken to the woodshed," claims Steen shows he agrees with.

Hall's video, titled “Noncompliant Movie,” encourages Christian Americans to resist what are perceived to be unjust government actions. In that video, Hall argues that most federal agencies — from the Federal Communications Commission and the Environmental Protection Agency to the Department of Education and the FBI — are unconstitutional because they are not explicitly laid out in the U.S. Constitution or by an amendment.

Vos has struggled to situate himself as a somewhat moderate questioner of the 2020 election.

He told a reporter in December "we'll never know" how much voter fraud occurred in the 2020 election, despite the confirmed cases being in line with prior years. But Vos also has not publicly entertained the idea of having Wisconsin try to revoke its electoral votes that were cast for Biden, leading to rebuke from some on the right — namely Ramthun, with whom Vos is now publicly feuding.

On Tuesday, Michael Gableman — the former state Supreme Court justice who is leading the taxpayer-funded probe of the 2020 election that Vos authorized — encouraged the Legislature to look into revoking the state’s electoral votes more than 14 months after the fact. Attorneys have said that revocation of the electoral votes is impossible and has been since they were counted on Jan. 6, 2021.

Steen says he is running “for normal people” who feel ignored by career politicians; Vos has been in county or state elected office continually since 1994. Steen said he will serve no more than three terms, arguing that it’s impossible to still be in touch with what constituents after working in politics for too long.

“I always say, 'politics' is made up of two words: 'poly,' which is many, and 'tics,' which are bloodsuckers,” Steen said. "The detriment to conservatism is a lack of engagement."

Regarding the election, Steen says he wants to see a “full forensic audit” like what was attempted in Arizona. That supposed audit — conducted by the inexperienced Cyber Ninjas firm, which is now permanently closed — uncovered no evidence of widespread fraud.

“What actually happened to that ballot once it goes through that scanner? … No one has actually taken the time to review the evidence,” Steen claimed, a claim election officials in Wisconsin have repeatedly refuted. “They, the people, want to know.”

Robin Vos has been blocking critics on Facebook; here's why it's probably legal

Assembly Speaker Robin Vos has taken to blocking critics, including conservatives, on his official campaign Facebook page, a move that his off… 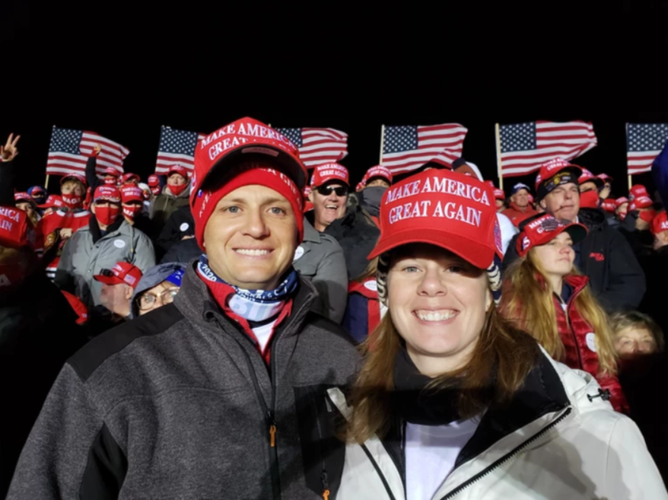 Adam and Hannah Steen at a Donald Trump rally. 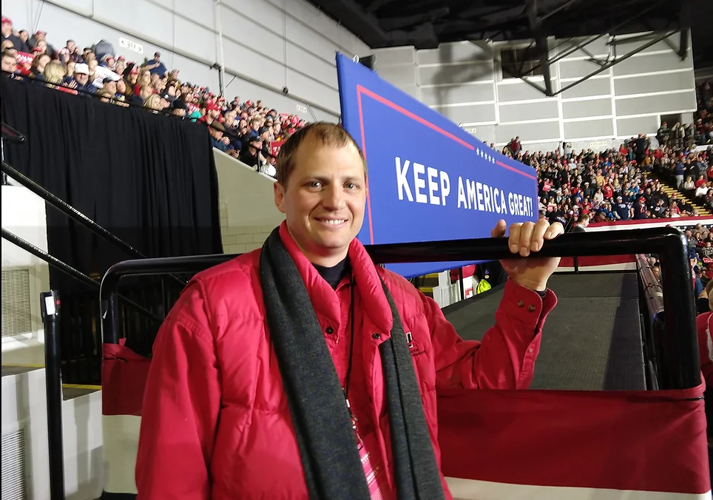 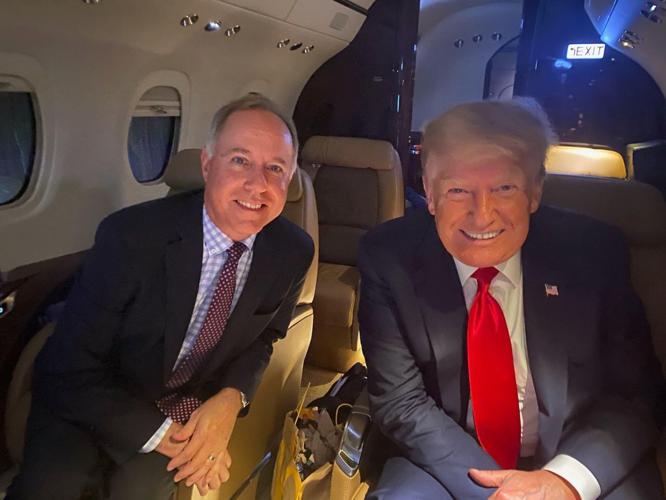 This photo of Assembly Speaker Robin Vos, R-Rochester, left, and former President Donald Trump was shared on social media by Vos and others after Vos' meeting with Trump on Saturday, Aug. 21, 2021. Vos traveled to meet with Trump after Trump began criticizing Wisconsin's Republican leaders on "election integrity" as they were not supporting his efforts to have the 2020 election overturned. The meeting at the time appeared to smooth things over between Vos and Trump, although the former president is now endorsing a challenger to Vos in Wisconsin Assembly District 63, Adam Steen. 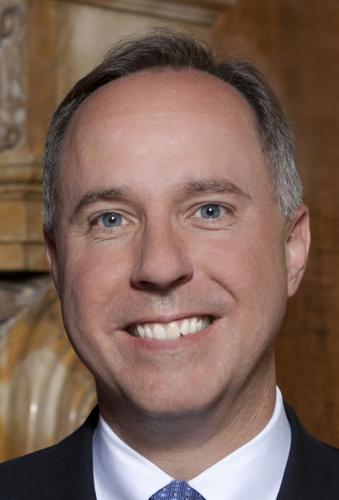