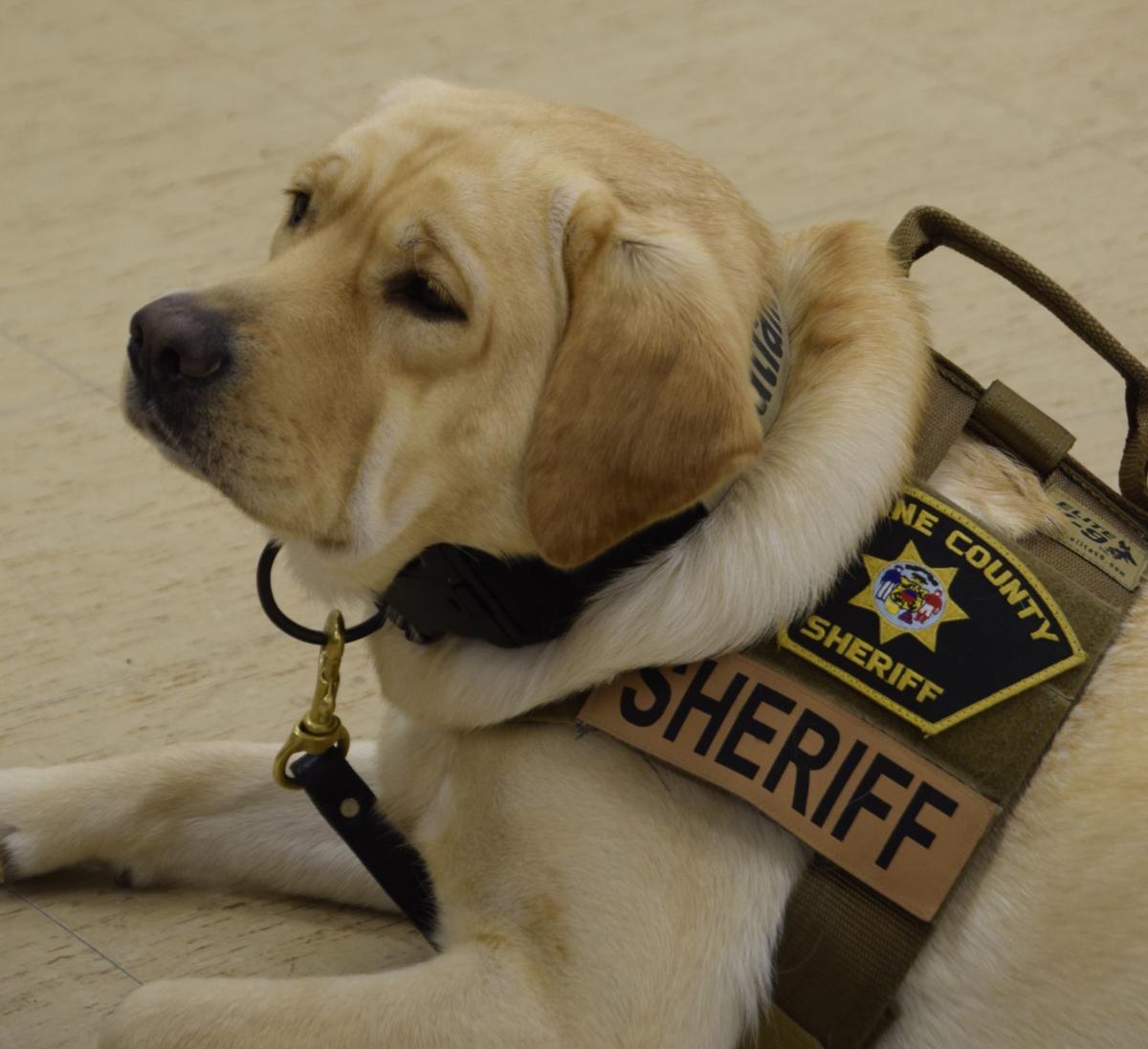 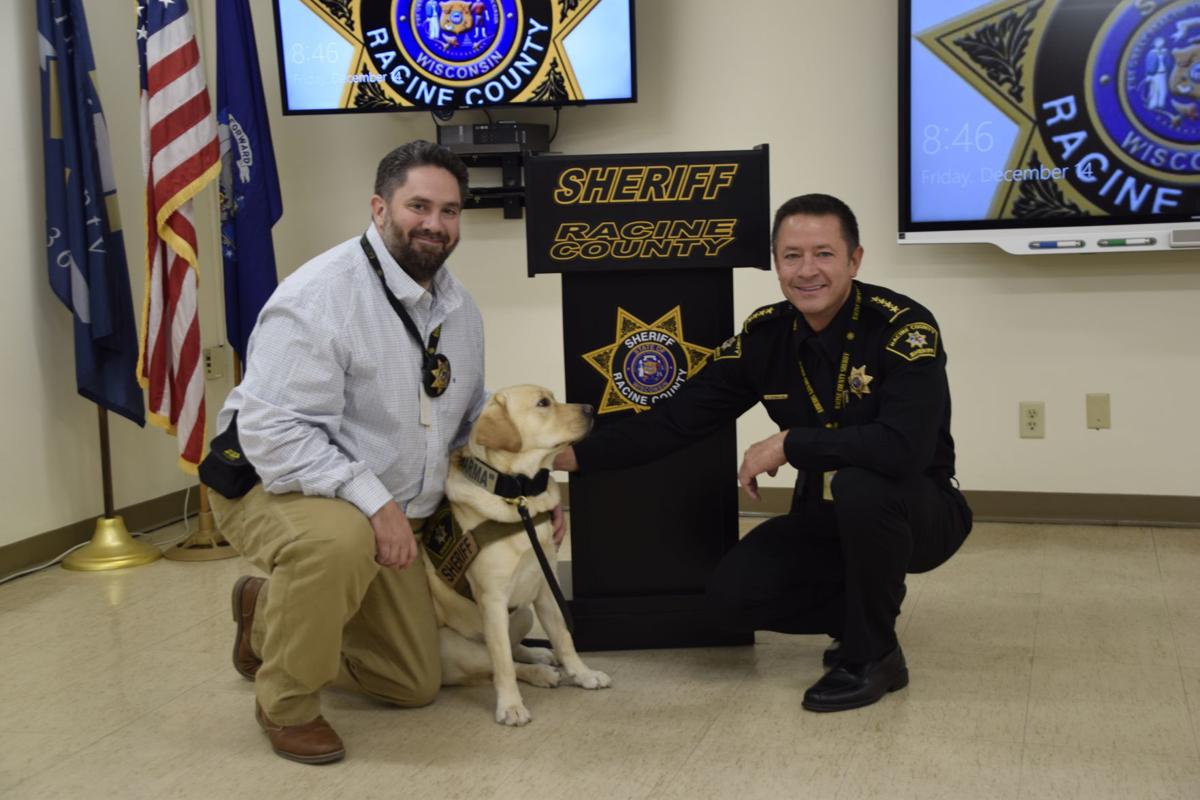 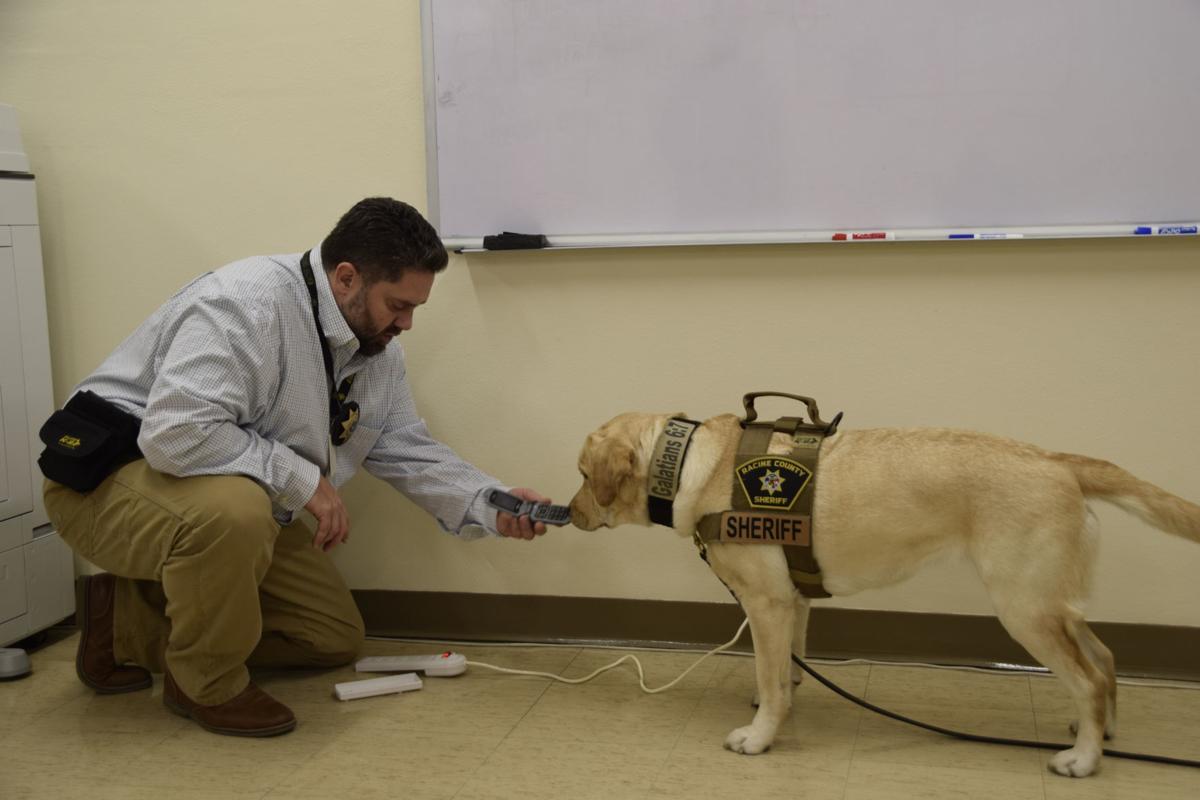 Sheriff's Investigator Jon Bechman holds a cellphone for Karma, who is trained in electronic detection. 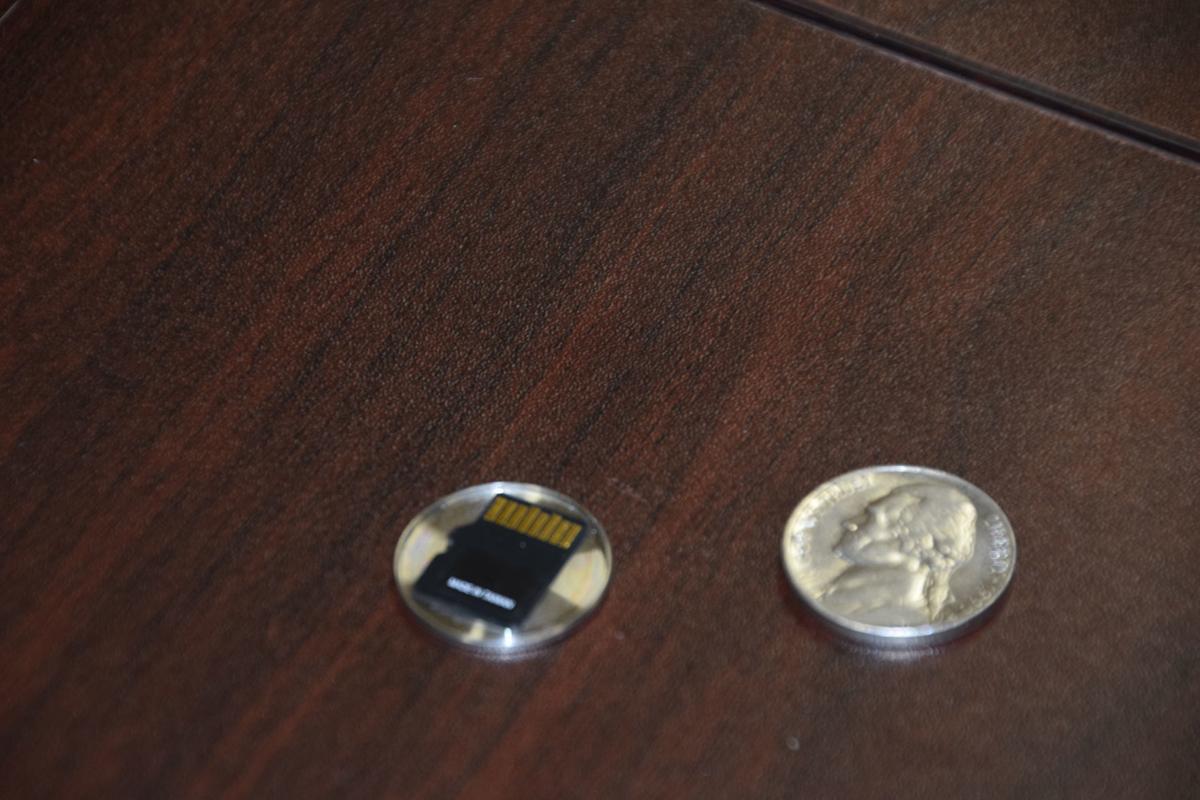 A container disguised as a nickel hides an SD card.

YORKVILLE — Police dogs are well known for their work in sniffing out drugs, tracking down suspects on the run and even missing people from time to time.

Karma began her life as a service dog trainee with the Indiana Canine Assistance Network. After training with ICAN for several months, it was determined that she would be better suited as an electronic detection K-9, Bechman said.

Karma is one of about 30 specialized electronic detection K-9s deployed throughout the nation. There is just one other such K-9 working in the state and that is Karma’s brother, Kozak, who works for the state Department of Justice.

Bechman said that Karma and Kozak and other electronic detection K-9s are trained to sniff out TPPO, a chemical that is used in circuitry for flash memory. Schmaling said perpetrators of child pornography try hard to conceal their illicit activities and will hide flash drives and camera SD cards containing illegal images.

“They go to extreme lengths to cover their tracks,” the sheriff said.

As an example, Bechman on Friday showed what appeared to be a nickel but in fact was a realistic looking container that contained a tiny SD card.

Bechman said he needs to have Karma fairly close so that she can pick up the scent of the electronic devices. And the scent is heavier than the air, so a device may be hidden in a ceiling and Karma will be indicating a find closer to the floor. But at least investigators are in the vicinity of the evidence and can narrow their search.

When she points out a possible location of a device with her nose, Karma receives a treat.

Bechman said he learned of the electronic detecting K-9s while attending a conference of crimes against children investigators.

Additionally, Karma and Bechman participated in three search-warrant details with local law enforcement in the Indianapolis area. During the course of those searches, Karma located a number of evidentiary items that proved valuable to the development of several child pornography criminal cases. One case in particular resulted in the arrest of the long-time head volleyball coach of Indiana University-Purdue University-Indianapolis.

Since taking on her duties for the Sheriff’s Office, Karma has already been involved in two search warrants, both for possession of child pornography. In those searches, Karma located several evidentiary items including a concealed phone and small electronic devices.

No cost to the county

“Although it is unfortunate that we live in a time where crime fighting tools like Karma are necessary, I feel honored and fortunate that our agency has been selected to receive such a valuable asset,” Schmaling said. “I believe Karma is going to be a fantastic addition to our ICAC team and will ultimately help us in our ongoing pursuit of a safer community for our children.”

All the costs associated with Karma including the training and equipment have been donated. The vehicle equipment and first aid kit were donated by Wisconsin Vest A Dog. Karma’s veterinary services are being donated by the Animal Hospital of Union Grove. Most notably, the $11,000 training cost and purchase cost of Karma was donated by Neighborhood Electronic Detection K-9 Inc., a not-for-profit organization based in Indiana that has donated other electronic detection K-9s across the country.

Karma is only trained as an electronic detection K-9, however she will be utilized in other capacities as well. Schmaling said Karma is a gentle and laid-back K-9 and is also suited to serve as an emotional support animal for crime victims, especially children. Karma can be requested to come to a scene or to a court proceeding where a child or victim is under stress.

She’ll also help her handler and other sheriff’s officers. Bechman said that law enforcement officers are often exposed to brutal images and depictions of child exploitation, real-life instances of child abuse, domestic violence cases, sexual assault cases and other circumstances that can take a toll both physically and mentally.

“It’s (canine support) mental health for us when you see child exploitation where you see photos and videos of children being tortured,” Bechman said. “Then you have something like this where you can turn around and have a breather. She’s invaluable as far as that kind of support goes. She’s awesome.”

As with all sheriff’s assets, Karma will be available to assist other agencies and officers throughout the region upon request, Schmaling said.

Of course, Karma is also going to be a great public-relations asset for the Sheriff’s Office: Plush toys with Karma’s likeness are to be ordered; when they arrive, they are to be available for sale to help support the Sheriff’s Office canine program. The toys also are given by deputies to children in traumatic situations.

“I believe Karma is going to be a fantastic addition to our ICAC team and will ultimately help us in our ongoing pursuit of a safer community for our children.” Racine County Sheriff Christopher Schmaling

"I believe Karma is going to be a fantastic addition to our ICAC team and will ultimately help us in our ongoing pursuit of a safer community for our children.”

RACINE COUNTY — Some events have changed from in years past and others have been canceled, but communities across Racine County are still cele…

RACINE — During the past few weeks, police departments across the nation have experienced an increase in calls for service involving the use o…

RACINE — While people lined the streets of Waterford and Union Grove for parades in western Racine County, the City of Racine’s streets were m…

Sheriff's Investigator Jon Bechman holds a cellphone for Karma, who is trained in electronic detection.

A container disguised as a nickel hides an SD card.