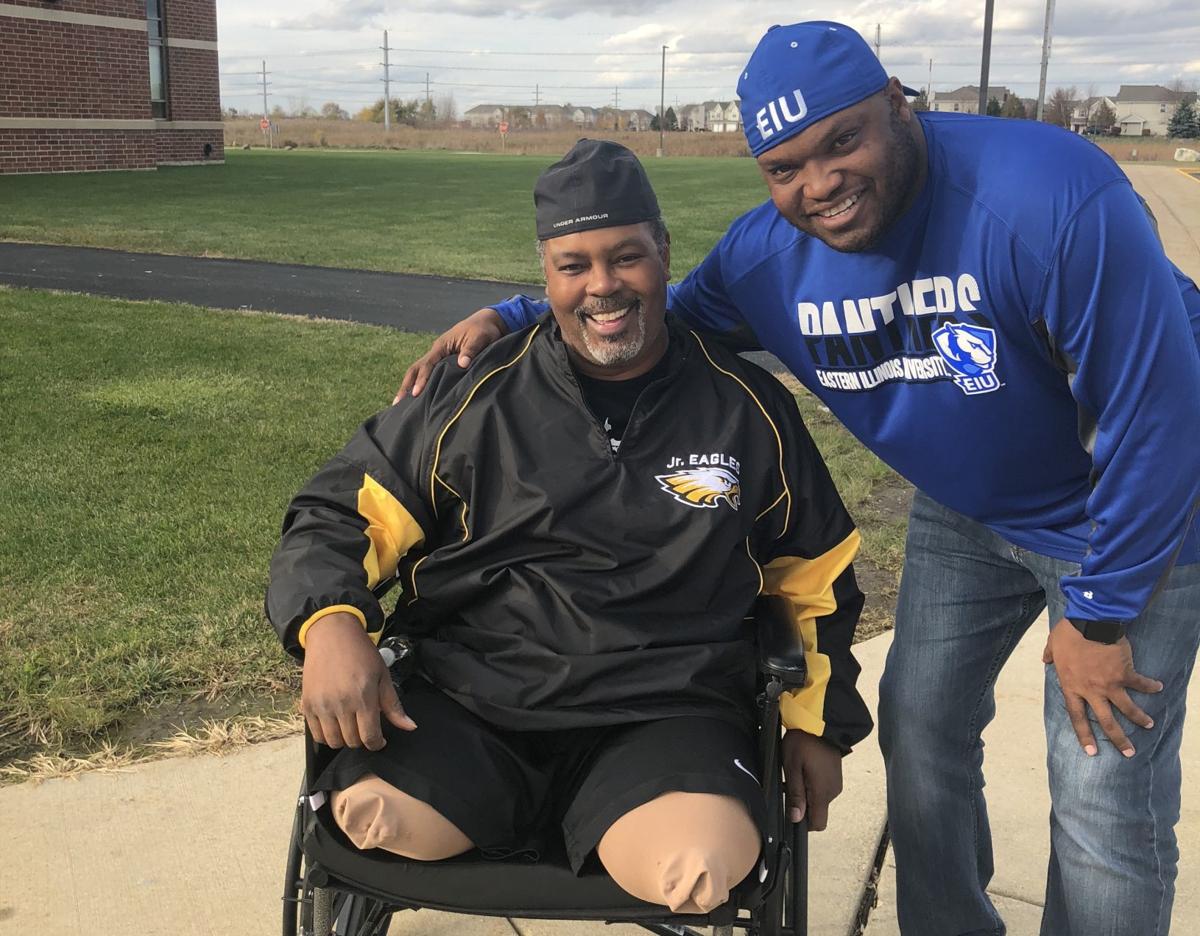 Henry Owens poses with former Racine Raiders running back J.R. Taylor. The two live about 10 minutes from each other in Illinois and have become close friends. Owens, who lost both of his legs in a boating accident last June 19, will be honored at the boys basketball team between Horlick and Park Wednesday night. 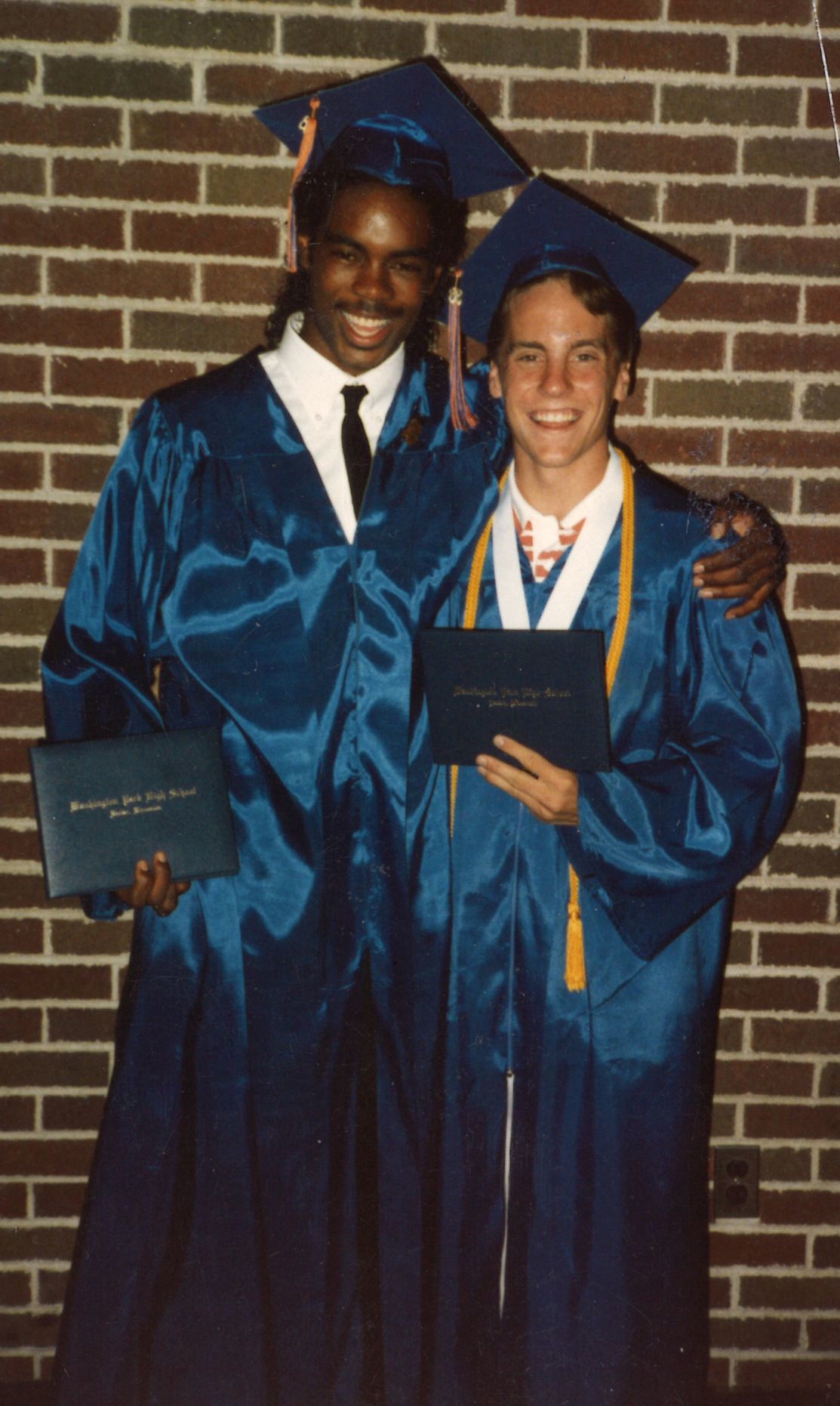 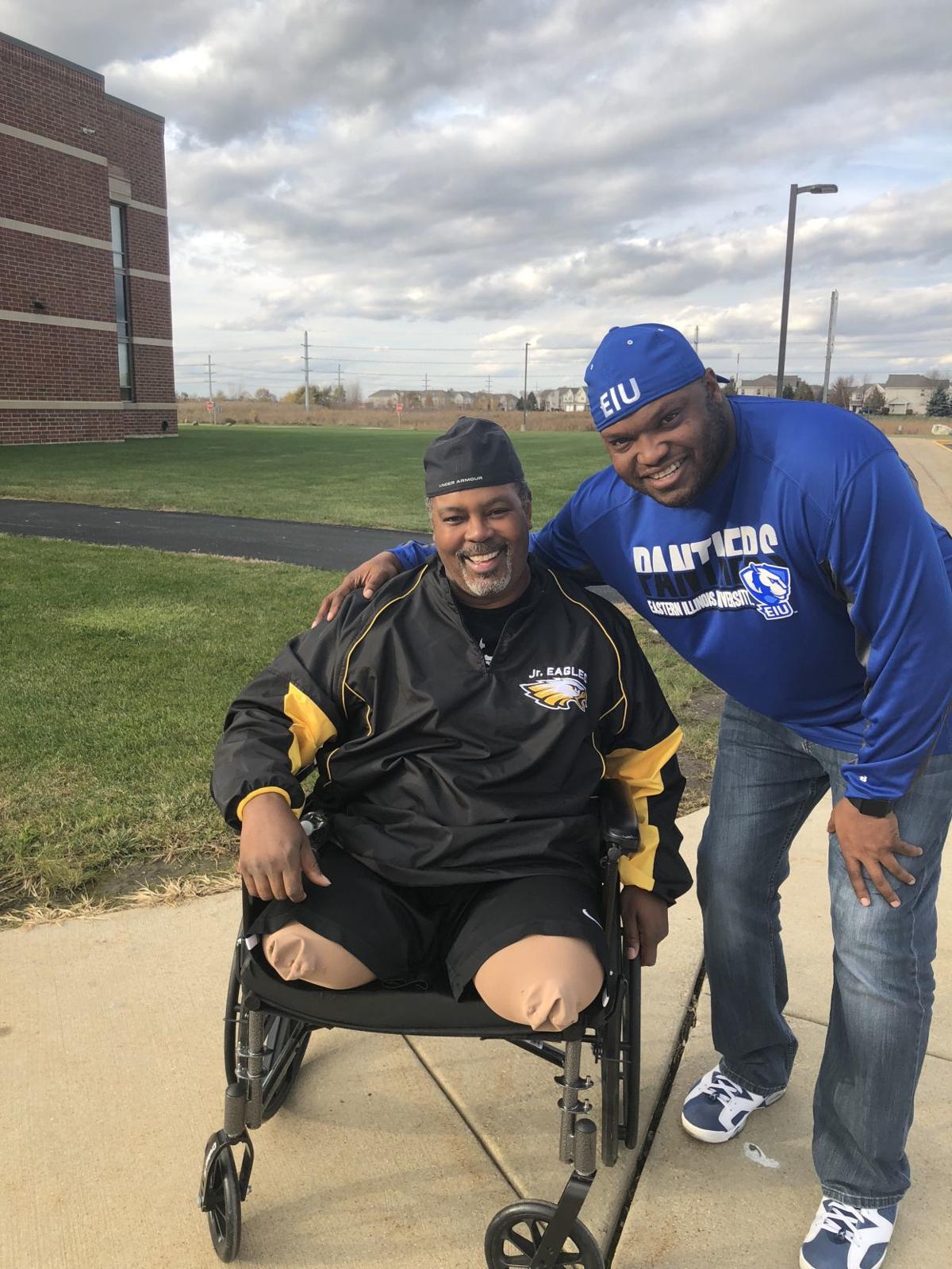 Henry Owens poses with former Racine Raiders running back J.R. Taylor. The two live about 10 minutes from each other in Illinois and have become close friends. Taylor recently set up a GoFundMe page to benefit the Owens family after he lost both of his legs in a boating accident last June 19.

As he speaks from his home in Carpentersville, Ill., Henry Owens is thoughtful, considerate and composed. There is no hint in his voice of any of the soul-sapping emotions that could easily have overpowered him after what happened last June 19.

Owens, a 1988 Park High School graduate, just knows there is a reason why a horrific boating accident during a family vacation cost him both of his legs above the knees. He has all the time in the world to lose himself in self-pity as he sits alone in his wheelchair at home, but that’s not what Owens is all about.

After all, how can Owens feel sorry for himself when he has been blessed with so much?

He has a loving wife, Melloney, whom he met while they were students at UW-Parkside in the early 1990s. They are the proud parents of sons Amari, 14, and Malakai, 11. Eventually, he plans to return to work as as senior pricing analyst for Quest Diagnostics in Wood Dale, Ill.

And then Owens is going to turn this horrific negative into a positive, using it as a tool to inspire kids to overcome challenges in their lives as a youth football coach. If he can handle this, he reasons, he can teach kids to handle anything.

“There’s a lot for me to do,” said the 48-year-old Owens, who has been coaching youth football for several years. “Whether it’s coaching more kids and molding them to be young men, I just feel that God has more work for me to do — to mold not only my two boys, but other kids and be a shining light on kids where they push themselves to become upstanding young men.”

More than 30 years after he graduated from Park, Owens is remembered not so much for the athlete he was — although he was a starter in football and basketball — but as a young man who was far more mature than his years.

Owens started as a wide receiver as a senior on Park’s 1987 team, the year before the Panthers won the WIAA Division 1 championship. When he was reminded of that unfortunate timing, he joked that, ‘I got ‘em ready for it.”

He was being self-deprecating, but there was some truth to his humorous observation. It could be said that Owens was such an outstanding individual that he helped cultivate a culture that made that 1988 championship so great.

“He was a heck of a dependable guy,” said Phil Dobbs, Park’s football coach from 1973-95. “He had such a positive attitude. Every day, he would come out there with the best attitude and he always had a smile on his face. He never complained and he lifted everyone else up emotionally because he was so much fun to be around.”

Tom Sager, the boys basketball coach at Park from 1974-92, remembers Owens as as heady player on the court. But that player doesn’t begin to compare with the person Sager remembers three decades later.

“We had student government at Park,” Sager said. “In senior council, he and (current Park basketball coach) Jimmy Betker were involved in that and added a lot to Park High School. I’m very proud of the way he handled things. You could always count on Henry to do the right thing.”

One won’t find a great deal of signature accomplishments for Owens in the archives. He caught just two passes as a senior in football. As a 6-foot-4, 170-pound forward for Sager, one highlight came when he scored 17 points, including 11 in the third quarter, in a 60-50 victory over Milwaukee South Jan. 26, 1988.

But in terms of records and accolades, well, that wasn’t what Henry was about.

“I put the team first,” he said. “I sacrificed scoring to make sure we won. I was always the one who guarded the toughest scorer on the other team. My claim to fame was I was a defensive stopper. That’s what I was known for.”

Owens wants to be known for so much more in the aftermath of his tragedy. He was given the challenge of his life the afternoon of Tuesday, June 19 and he’s going to figuratively run with it to try and make a difference.

Henry and Melloney rented a tan Dodge Caravan for their family vacation in June. Their plan was to visit the NFL Hall of Fame in Canton, Ohio, zig-zag around the eastern United States to different colleges — Amari, an Ohio State fan, especially wanted to visit that campus — and drift on to Myrtle Beach, S.C., for some fun and sun.

On the morning of June 19, the family went jet-skiing. They lounged on the beach. They went on a raft ride.

“And then we did the para-sailing after that,” he said.

“We were getting off one boat and getting on what they call a banana boat,” he said. “A crew member told me to scoot up and, when I did, I slipped off. A big wave came and pushed me under the banana boat. At the same time, the propellers were sucking me in. That’s when the propellers caught my legs.

Knowing that he was bleeding and that blood attracts sharks, Owens desperately tried to get out of the water. Melloney, not realizing how compromised her husband was by wounds she could still not see, urged him to get out of the water. When she reacted with horror after he was pulled up on the boat, “I just told her to relax and calm down,” Owens said.

Owens started having trouble breathing as he continued to lose blood. He told Melloney that he needed some oxygen. As Owens was rushed to shore, a wave hit their boat and one of Owens’ mangled legs fell off. And then he blacked out. After being placed in a medically-induced coma, Owens did not awaken for two days in a Myrtle Beach hospital.

The road to recovery

He was eventually moved to Lutheran General Hospital in Park Ridge, Ill., where he would be released July 19 — a month to the day after the tragedy. His most difficult experience while he was hospitalized came when he realized he couldn’t even do the most basic things without assistance.

The silver lining has been enormous since the tragedy. Neighbors have stepped up with home-cooked meals for the Owens family. One even constructed a ramp to make their home wheelchair accessible. Former Racine Raiders great J.R. Taylor, who lives about 10 minutes from Owens, has set up a GoFundMe page that has already received donations worth about $50,000.

A lawsuit is in the works, the specifics of which Owens declines to discuss. But what dominates his thoughts more than anything these days is turning his tragic accident into a positive.

He is going to walk again one day with the use of prosthetic legs. Bank on that. He’s also going to use his experience as a tool to create a positive difference with kids. Bank on that, too.

Taylor believes it’s just a matter for his friend to create a new life for himself.

“When he was in the hospital, I spent a lot of time with him and his first thing was, ‘I need to get out of here so I can start my life,’ “ Taylor said.

“I just feel that God has more work for me to do — to mold not only my two boys, but other kids and be a shining light on kids where they push themselves to become upstanding young men.” Henry Owens

Help from some friends

J.R. Taylor was known as a dominant running back for the Racine Raiders for several seasons before retiring after the 2-16 season. He also has a charitable side to him.

After former Park High School athlete Henry Owens,a close friend, lost both of his legs in a boating accident last June 19, Taylor set up a GoFundMe page to benefit the Owens family. The page, which has a goal of $75,000, has already received $53,000 in donations.

"We trying to help with his medical bills, do things for his house, get dinner for the family ... things like that," said Taylor, who lives 10 minutes from the Owens family in Illinois. "We want to help them make the transition through this."

Park boys basketball coach Jim Betker, who graduated from the school with Owens in 1988 and remains close friends with him, also has something planned.

He is planned a "Hoopin' 4 Henry" benefit for Owens when Park hosts Horlick Jan. 25.

"I just feel that God has more work for me to do — to mold not only my two boys, but other kids and be a shining light on kids where they push themselves to become upstanding young men."

Some local teens try GoFundMe to pay for college

RACINE — Unlike many college freshman-to-be, Josh Mioduszewski knows what he wants to do. Before even finishing kindergarten, he knew he wante…

Henry Owens poses with former Racine Raiders running back J.R. Taylor. The two live about 10 minutes from each other in Illinois and have become close friends. Owens, who lost both of his legs in a boating accident last June 19, will be honored at the boys basketball team between Horlick and Park Wednesday night.

Henry Owens poses with former Racine Raiders running back J.R. Taylor. The two live about 10 minutes from each other in Illinois and have become close friends. Taylor recently set up a GoFundMe page to benefit the Owens family after he lost both of his legs in a boating accident last June 19. 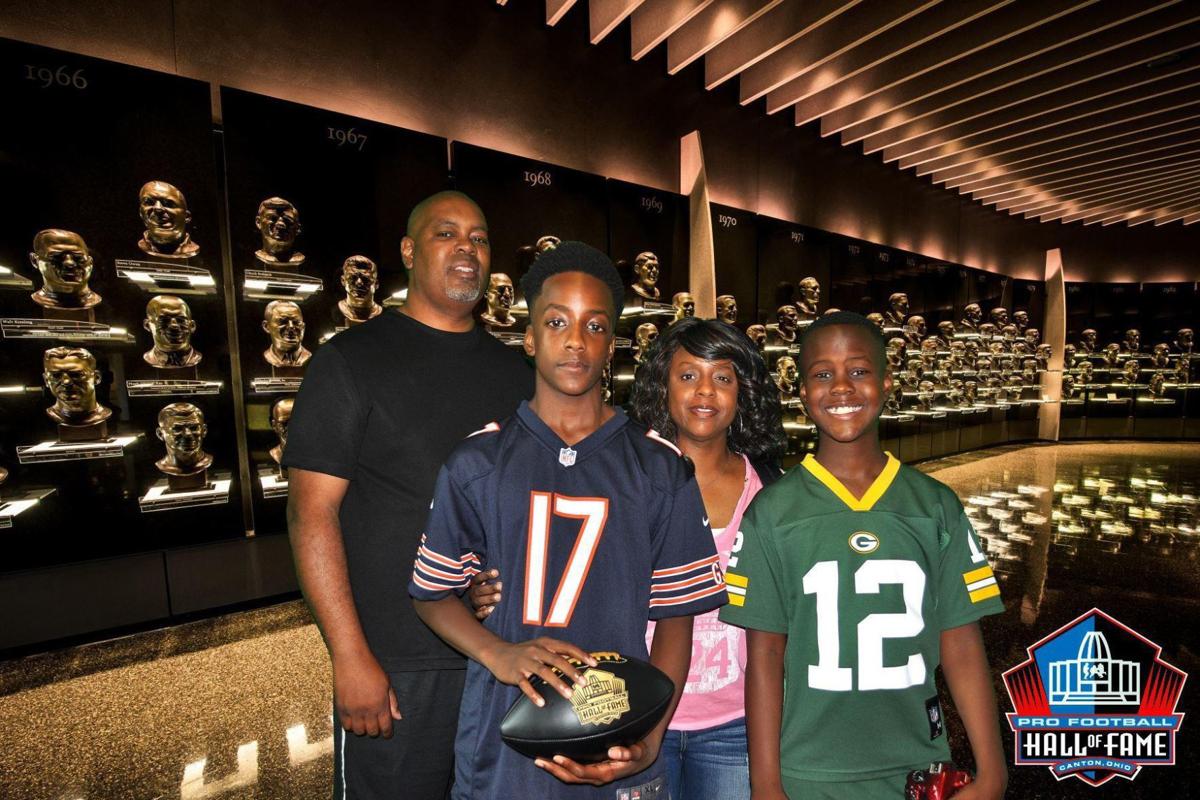