MOUNT PLEASANT — If you turned onto 23rd and Mead Street in Mount Pleasant on Tuesday night, you would’ve been met with a long line of cars waiting in line, with traffic being directed by the Mount Pleasant Police Department.

The cars were waiting in line for a drive-thru food pantry held by the Journey Disaster Response Team — a nonprofit volunteer ministry based in southeast Wisconsin and an extension of Journey Church — in partnership with the MPPD.

About 228 food boxes were distributed. Each food box contained about four meals, in total being able to feed over about 900 people.

The food pantry was located at the Lakeside COP (Community Oriented Policing) House, at 2237 Mead St.

Cars were welcomed by volunteers and asked how many families they were going to feed. The number they answered with was the number of food boxes they would receive.

Lisa Madden, community relations coordinator for the JDRT, said a lot of the drivers coming through were picking up food boxes for families who don’t have transportation or a way to get to the pop-up event.

According to a study done by the Southeastern Wisconsin Regional Planning Commission, in 2015, about 195,000 individuals in the county — including seniors (75 and older), persons in low-income households, people with disabilities and households with no vehicle available — are dependent on public transportation.

The drive-by concept of the food pantry on Tuesday is “filling a gap some food pantries can’t meet,” Madden said.

“Just think about how many families they’re helping,” Madden said of the drivers coming through, picking up food boxes for delivery.

MPPD Police Officer Matthew Kwapil volunteered at Tuesday’s event alongside fellow COP Officer Rachel Gardinier. He said partnering with JDRT to host these food banks has been successful and the turnout has been great.

“We did one of these three weeks ago, it was freezing,” Kwapil said, “but people were still there.”

He said about 10 to 15 kids in the neighborhood who frequently visit the COP House came along and volunteered on Tuesday.

“Unfortunately, they don’t come from much, but they want to help others in need,” Kwapil said. “Here’s something where they can say, ‘I might not have the best life but I can help others.’ “

Other officers out of uniform volunteered their time, Kwapil said.

As long as JDRT has food to donate, Kwapil said he was sure MPPD will continue to work with them in distributing it. “Let’s do it as much as we can,” he said.

Tom Strenger, logistics lead at the JDRT, said the turnout for the drive-thru food pantry was as great as he expected it to be.

At about 5 p.m., the truckload of food boxes they had to give out was almost empty.

“Word has gotten out,” Strenger said. “We’re building trust in the community, of people telling their neighbors what we’re doing here.”

JDRT will host another food pantry at Racine County’s biggest homeless shelter — HALO (Homeless Assistance Leadership Organization), 2000 De Koven Ave. — on Saturday, where they are planning to give away 600 food boxes from 1-3 p.m.

For more information on JDRT and how to help, or to request a food delivery, visit JDRT’s website at journeydrt.com.

A big thank you 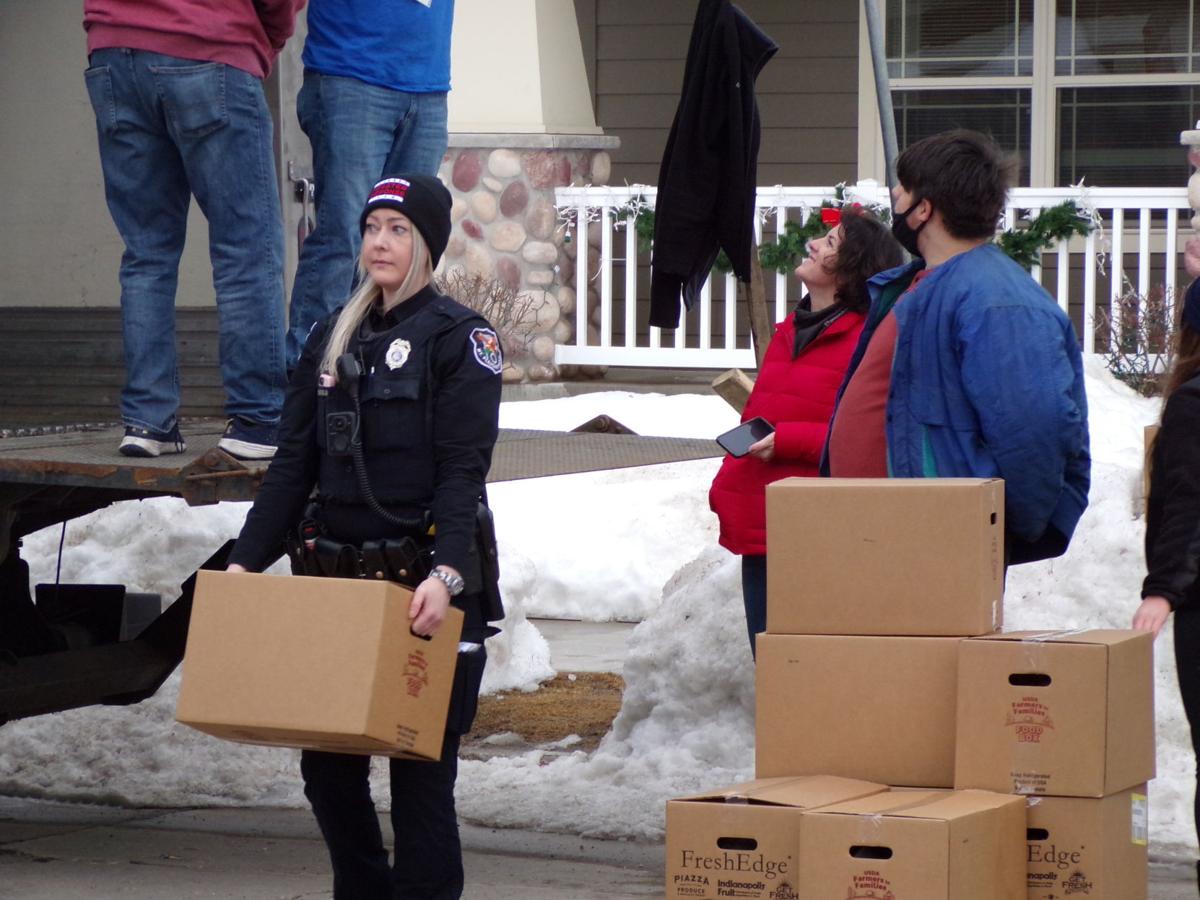 Rachel Gardinier, a Mount Pleasant police officer, stands at the ready with a food box to deliver on Tuesday. 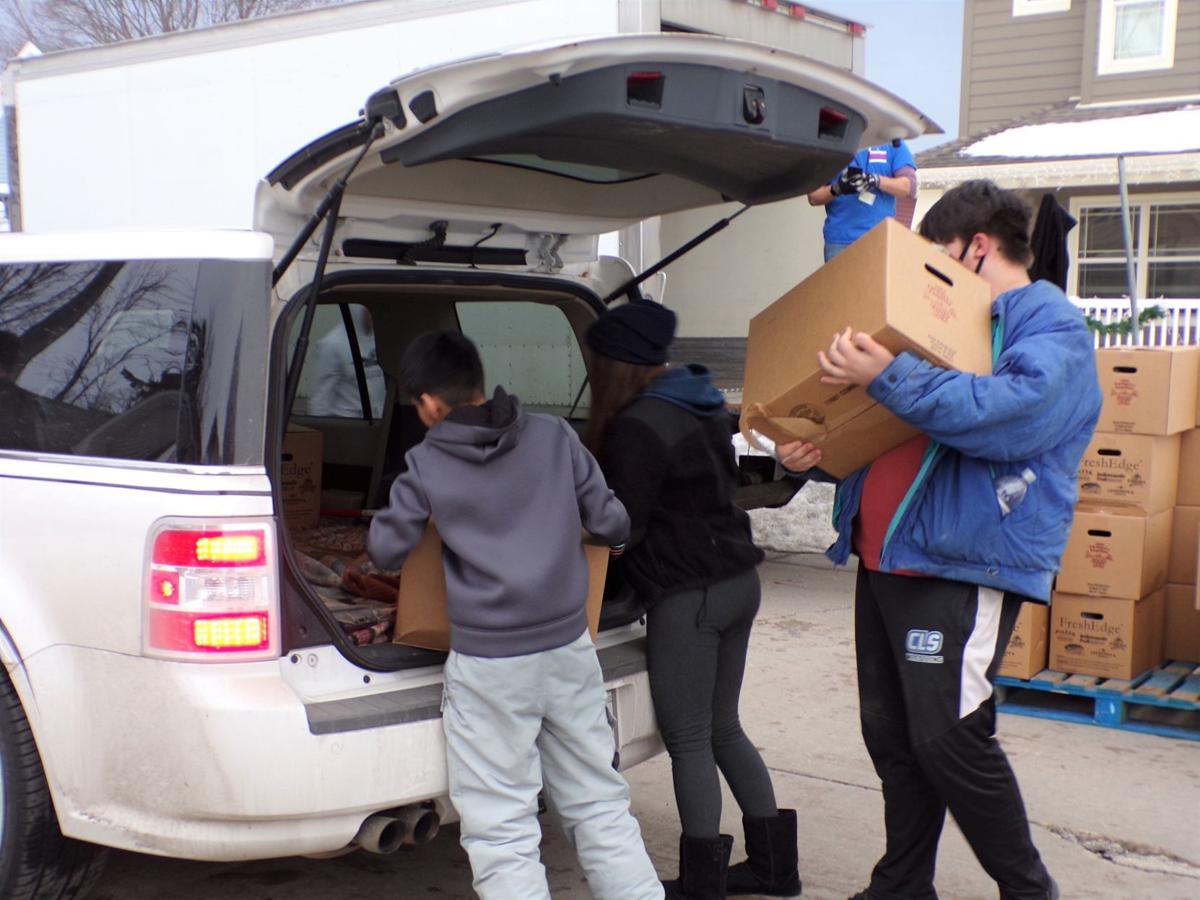 Volunteers at the pop-up food pantry load up a vehicle with a few boxes of food on Tuesday. Anyone could drive up to the food pantry and let the volunteers know how many families they're going to feed. Lisa Madden, community relations coordinator at Journey Disaster Response Team, said those with cars can deliver food boxes to families who don't have transportation. "They're a big help," she said. 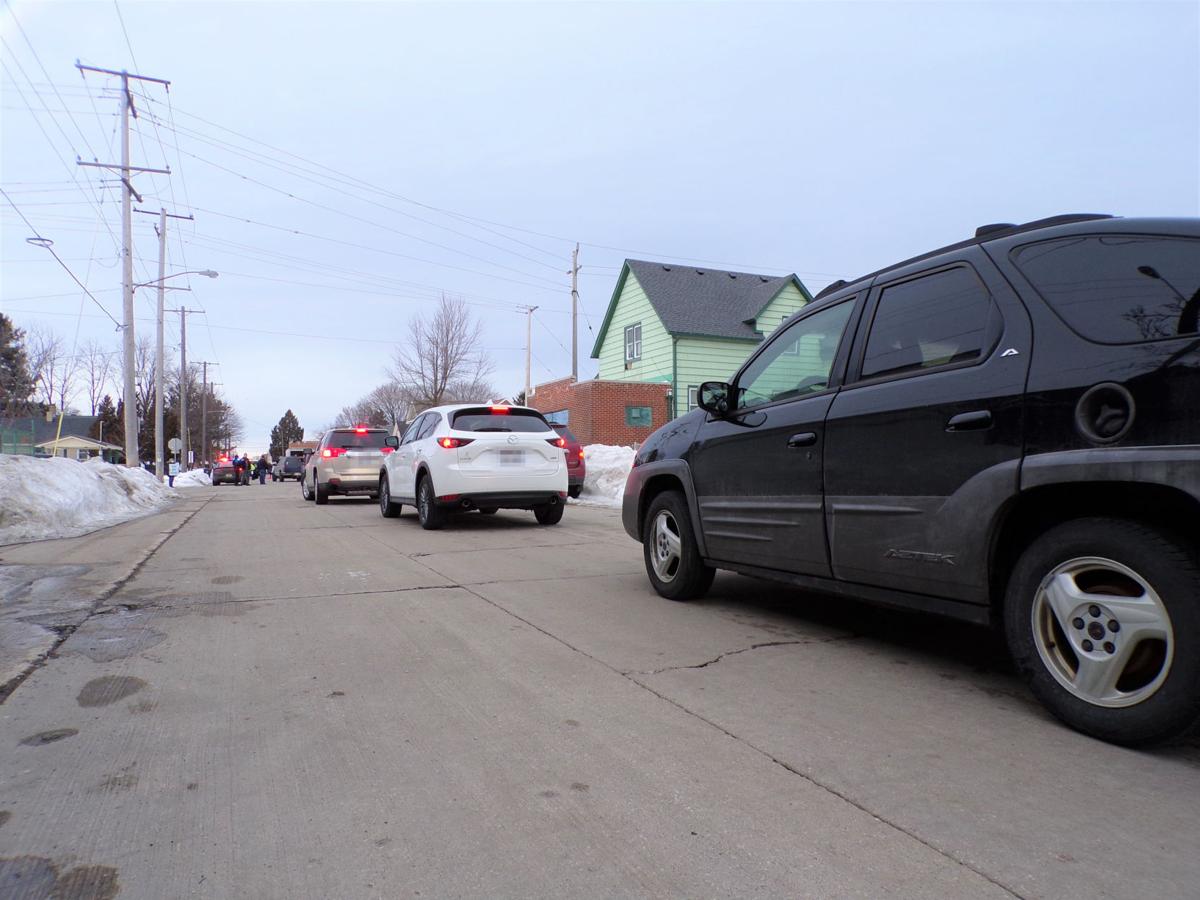 Cars are lined up on Mead Street in Mount Pleasant on Tuesday, waiting to have volunteers of the Journey Disaster Response Team and the Mount Pleasant Police Department load up their trunks with food boxes.