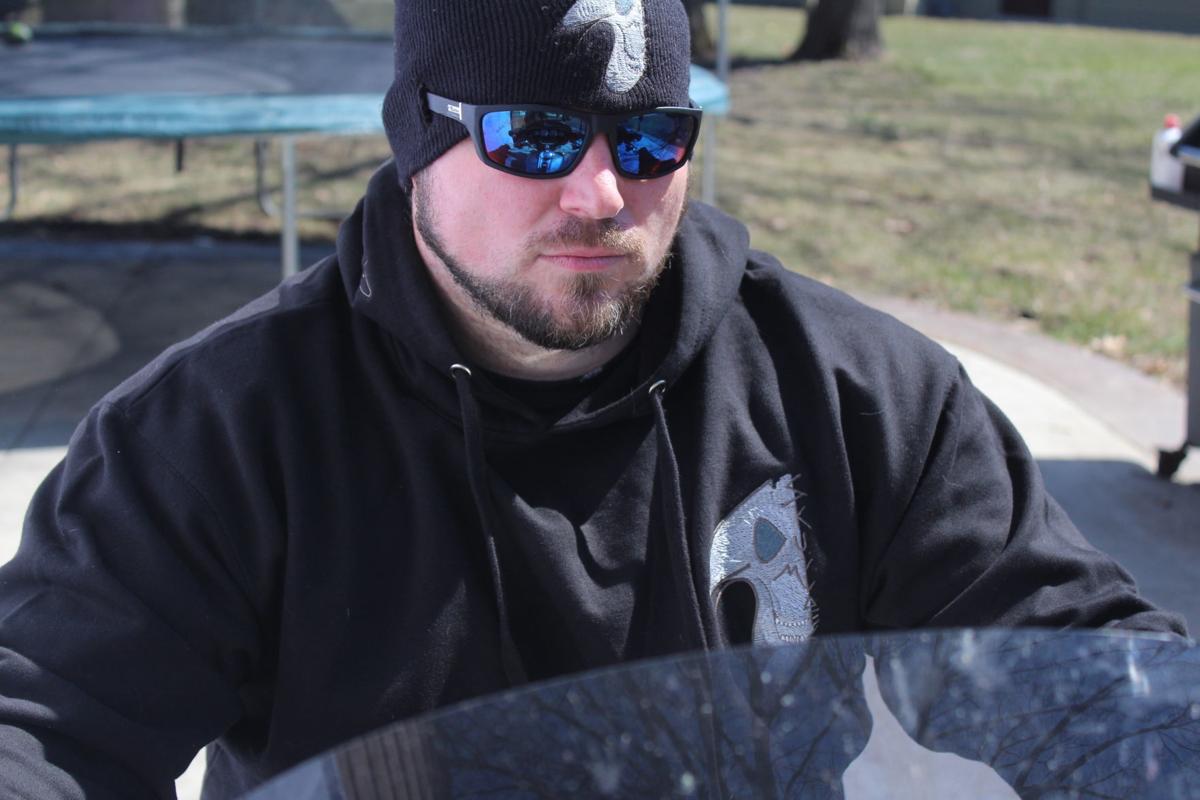 Nick Loomis sits atop his 2016 Harley-Davidson motorcycle outside his Elmwood Park home, which doubles as the business headquarters for CM Skullies. 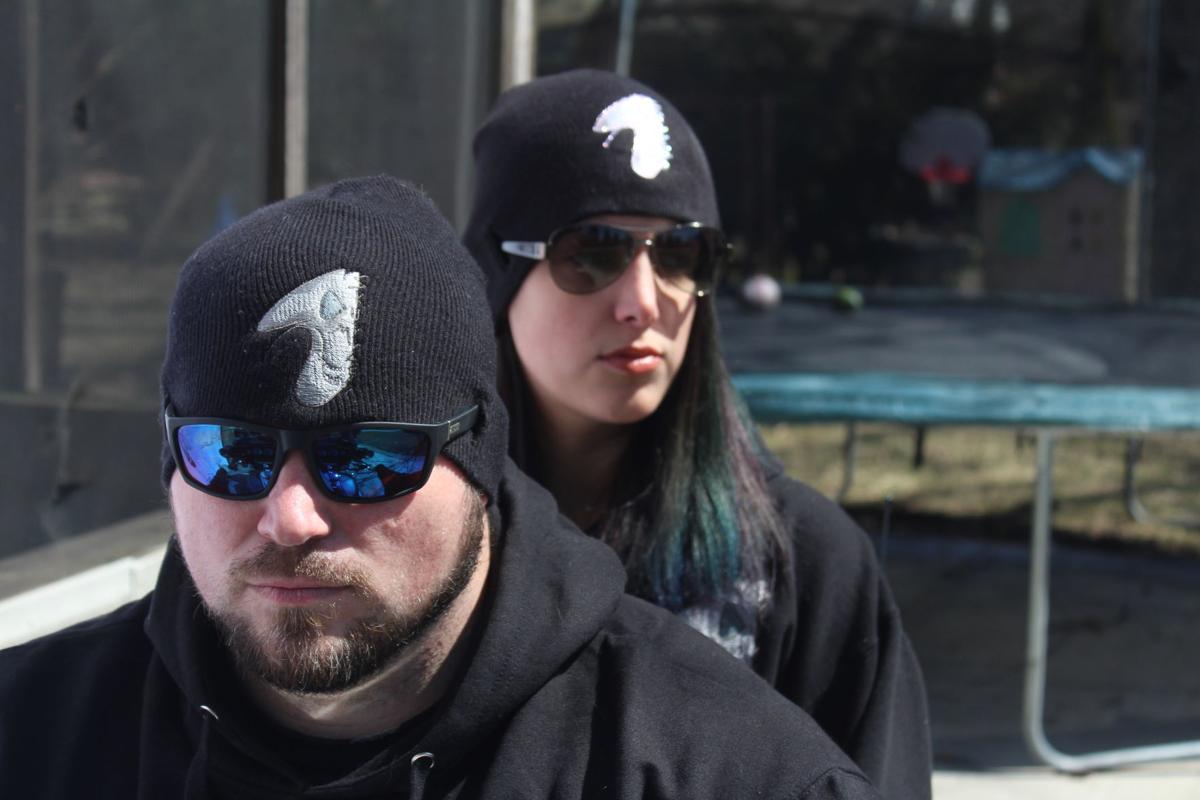 Nick and Abrianna Loomis sit on Nick's motorcycle outside of their Elmwood Park home. In September 2017, the couple acquired a patent for the skull caps they designed specifically for motorcycle riders and started selling them soon after. 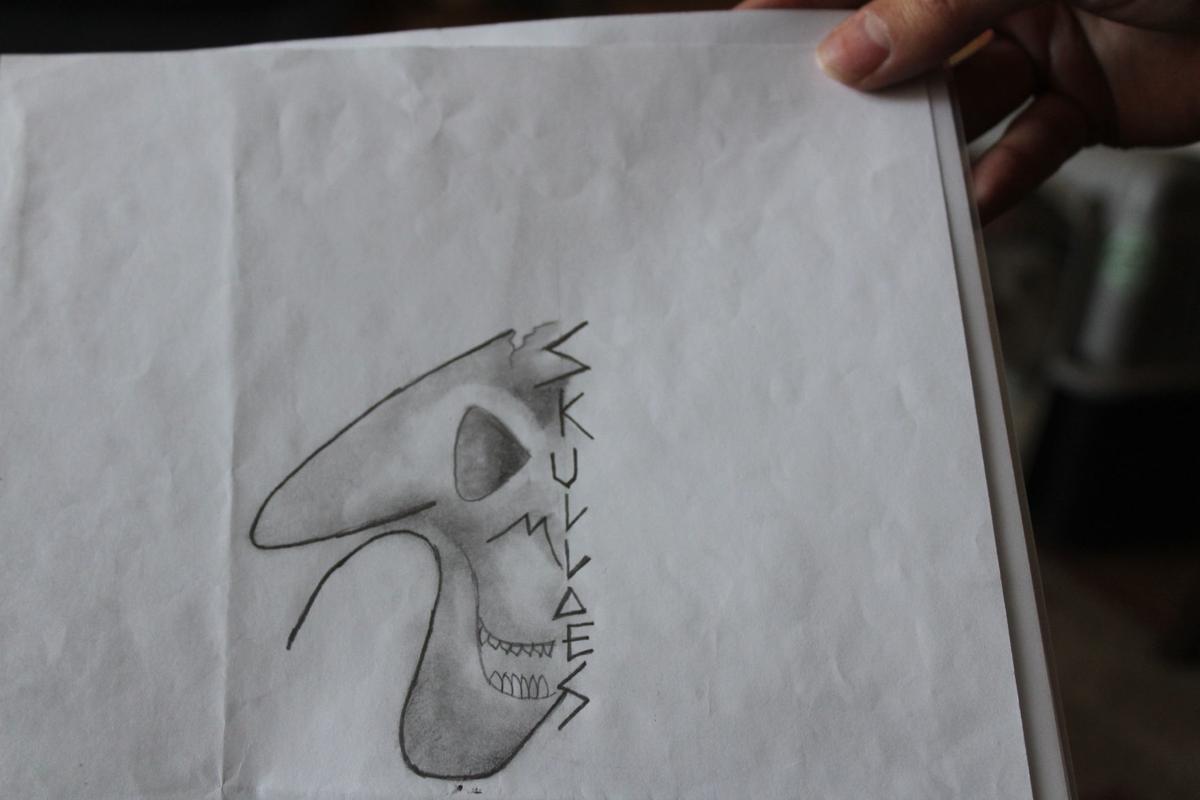 Abrianna Loomis shows off her artwork, the original design for the CM Skullies logo. 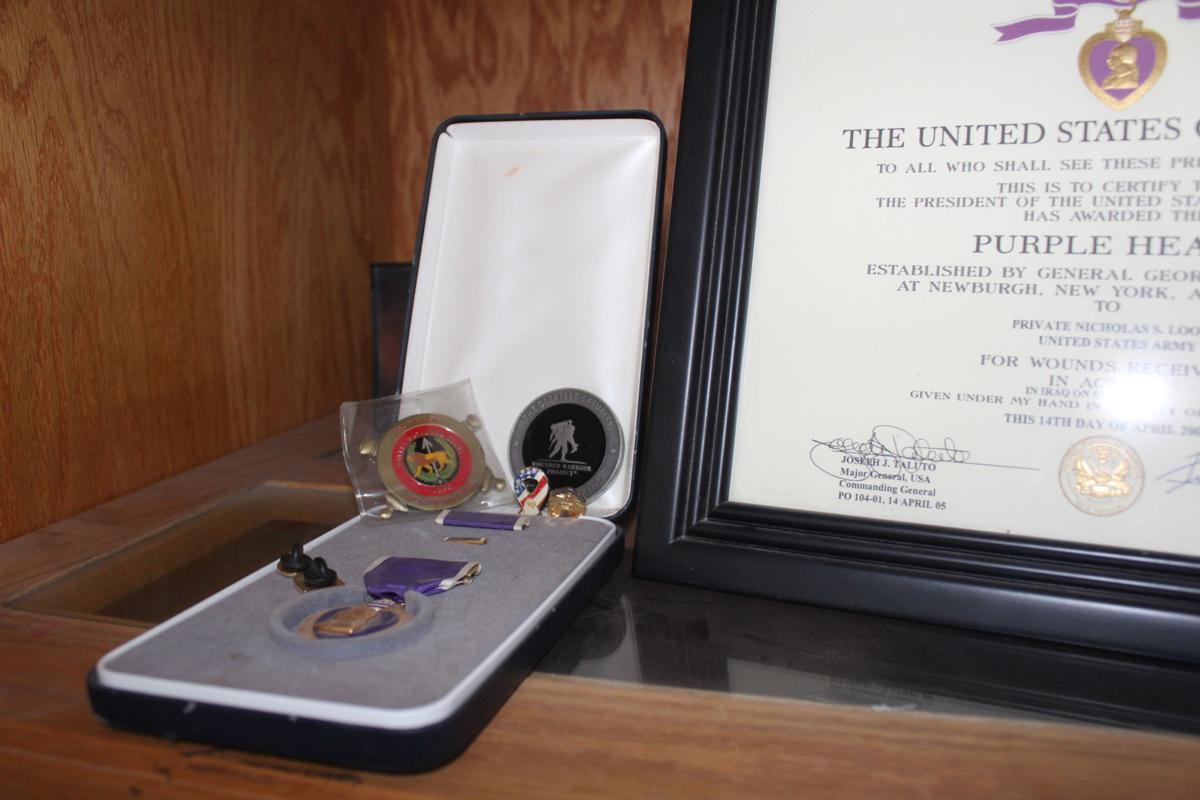 A Purple Heart medal, given to military members who are injured in combat, is on display inside Nick Loomis' home. 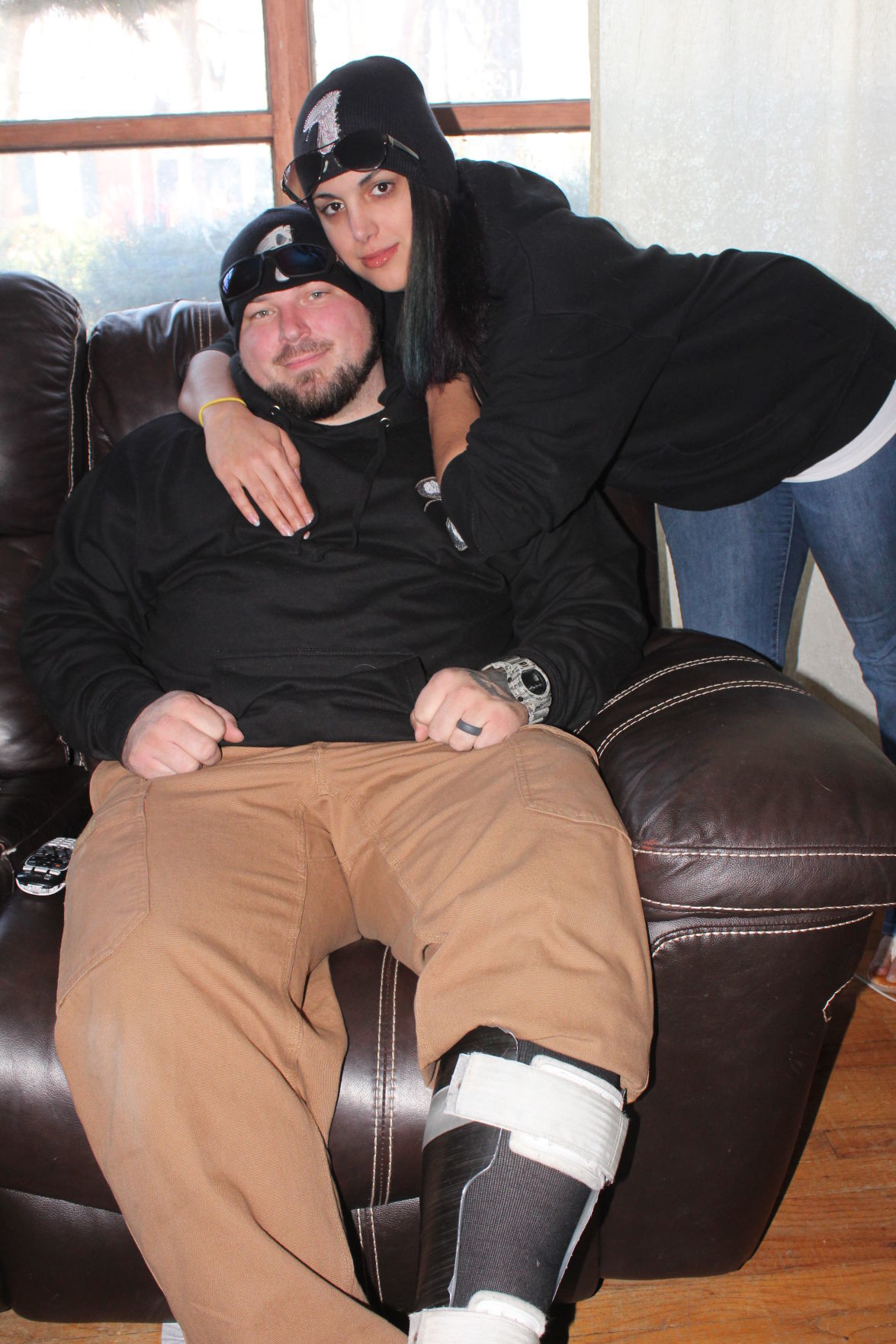 Abrianna Loomis hugs her husband, Nick Loomis, inside their Elmwood Park home. They've been married since May 2008, three years after Nick returned home from Iraq, injured. 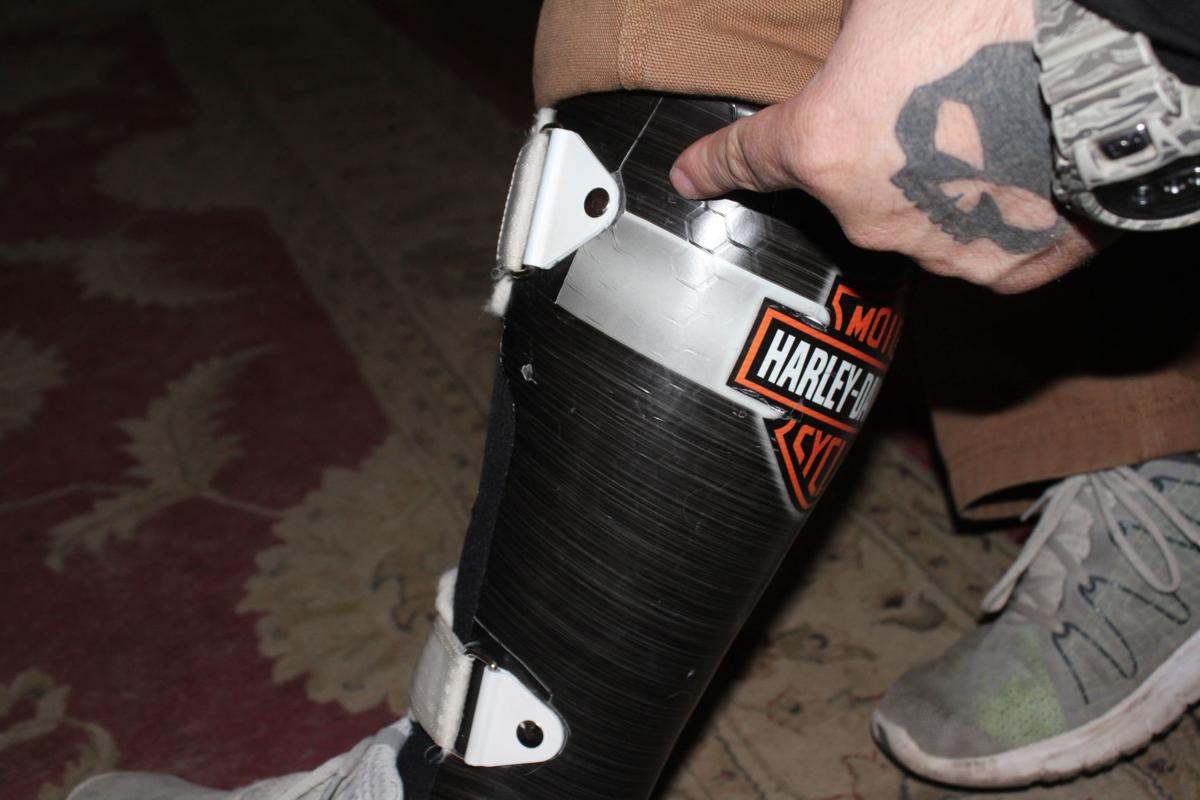 Nick Loomis, 35, points to where the shrapnel came through his leg during a 2004 mortar attack while serving with the Army in Iraq.

ELMWOOD PARK — In 2004, while serving in Iraq as part of an Army combat patrol team, Nick Loomis was caught in a mortar attack. A shell exploded 7 feet away from him, leaving more than 1,000 individual wounds, ripping a tendon in one leg in half.

He needed both of his wrists cauterized. Shrapnel lodged inside his head later became infected. Four surgeries were required to repair his retina, and he doesn’t have any feeling in the lower half of his left leg to this day.

He returned to his hometown, Racine, in late 2005 with a Purple Heart. To date, he’s had 31 surgeries, and his left calf and foot are still dead weight, supported by a brace with a Harley-Davidson insignia.

Loomis married his wife, Abrianna, in May 2008, but still had trouble resettling into civilian life. PTSD and depression became constants, as they are for many veterans.

In the past couple years, however, he’s started to come around the corner. Inspiration was found, strangely, in his ear and on a Harley.

“I’m an adrenaline junkie and that’s just the way it is. Hurt or not hurt, I learned to ride (motorcycles) again so that I could go fast. That’s basically it,” Loomis said, talking in his living room at his home in Elmwood Park.

When he came back home in 2005, it took several years to relearn how to ride and how to walk. A perforated eardrum made balance difficult, especially once it got cold.

Like a lot of things with his readjustment, he said he just shut up and dealt with it. A couple years ago, Abrianna encouraged him to find a solution.

“My wife is, honestly, the drive behind this,” Loomis said. “She’s the rock, the one that dragged me through the tough times.”

Keeping his head warm while wearing sunglasses was difficult. There weren’t any hats that accommodated glasses, but Loomis needed both to comfortably ride.

So, Abrianna pulled out her sewing machine and went to work.

“I made one for myself to see how it would go, but it was a lot of trial and error,” Loomis said.

The couple tested a handful of designs before finding a quality prototype: two narrow Velcro slits on either side of a beanie.

It was simple, and it worked. Loomis’ shades would stay in place or could rest comfortably on top of his head without falling off.

CM Skullies was born. Last September, the couple acquired a patent and started selling them soon after. In less than six months, they'd sold more than 1,000 hats, fulfilling orders from mechanics, construction workers and the Los Angeles Police Department.

“It started to evolve into how many different people could use it,” Loomis said. “It’s an everyday product. We didn’t realize it ... we’re the only one out there on the market that does anything like it.”

Abrianna and Nick are Racine natives. Nick Loomis graduated from Park High School in 2001; he is an assistant coach for the St. Catherine's High School football team.

Nick’s father was known around town as “Cave” or “Caveman,” Nick said. He was a “rough and tumble type of person” who liked to go fast, just like his son. He inspired the name of the company: CM, for Caveman.

Caveman passed away suddenly several years ago. A devoted family man, Loomis named the company that gave him purpose after his father, who had given him life.

Feelings of loneliness are an ongoing battle for Loomis. Whenever he goes on marketing trips to sell the beanies, he's usually accompanied a close friend or family member.

“If it had been me, alone, I would’ve been dead five, six, 10 years ago,” Loomis said. “I would’ve driven my motorcycle into the back of a semi or something.”

After retiring from the military, Loomis felt generally unmotivated. He was still recovering from surgeries and had ongoing injuries, and the Army's structured regimen was long gone.

“When you’re serving in combat, there’s an intense sense of camaraderie and being part of a team and a mission,” said Ryan Herringa, an assistant professor of psychiatry at the University of Wisconsin-Madison. “Even if someone doesn’t have PTSD (post traumatic stress disorder), (veterans) may struggle to find a sense of belonging and being part of something bigger than themselves.”

Today, Loomis talks excitedly about his work. He bounces between topics and projects quickly, and it’s as easy for him to discuss his PTSD as it is talking about his growing business or ever-supporting wife or beloved K-9s.

“Three kids, three dogs and a business to run. It gets to be a lot. But I feel like that this business has given me a purpose again. I wasn’t a productive member of society for many years,” Loomis said. “I was basically unemployable.”

Just as mental illness hides in the mind, veterans have often flown under the radar.

“PTSD and things like that are always invisible and not always seen,” Abrianna said. “We need to pay a little more attention to it.”

For the moment, Abrianna is tasked with sewing logos into every hat and hoodie the company sells. There are several designs she uses, including two CM Skullies logos and three devoted to charity: a thin blue line flag where a portion of the proceeds are donated to the families of fallen police officers; a pink heart for Susan G. Komen, the breast cancer support organization; and a patriotic design for veterans suicide prevention.

“I’ve handed them out to homeless guys on the street,” Loomis said. “We’re about giving back.”

As the business expands, the couple hopes to land a manufacturing deal so that Abrianna doesn’t have to continue producing everything by hand. Still, they are proud that all of their products are American-made.

Loomis is aware that his PTSD, depression and remaining injuries will probably never be cured in full. But he is learning to cope.

“The pain and the traumatic memories obviously are still there, but when you have a bigger meaning and purpose in life, they become more manageable,” Herringa said. “They won’t cause the degree of suffering they might’ve otherwise.”

An active mind can better regulate itself to “deal with past traumas,” Herringa added. “We have a lot to learn about what ‘meaning in life’ can do to change the body.”

Loomis says that, sooner or later, his leg is going be amputated. But it doesn’t seem to bother him.

In 2005, he had to readjust to civilian life. He’s figured out how to be a married man and a father, relearned how to walk and ride his Harley, and become a business owner. Losing half a leg shouldn’t slow him down for long.

“PTSD and things like that are always invisible and not always seen. We need to pay a little more attention to it.”

Honoring the POWs and MIAs left behind, and the effort to bring them home

DOVER — Laurens Vellekoop was a career member of the U.S. Army. He enlisted in 1975, the same year the Vietnam War ended, and continued to ser…

RACINE COUNTY — The county has a new veterans service officer.

Two Wisconsin veterans can win a free Harley-Davidson motorcycle: Here's how to apply

A Wisconsin-based nonprofit wants to give two injured veterans in Wisconsin a two-wheeled gift: a Harley-Davidson motorcycle.

Nick Loomis sits atop his 2016 Harley-Davidson motorcycle outside his Elmwood Park home, which doubles as the business headquarters for CM Skullies.

Nick and Abrianna Loomis sit on Nick's motorcycle outside of their Elmwood Park home. In September 2017, the couple acquired a patent for the skull caps they designed specifically for motorcycle riders and started selling them soon after.

Abrianna Loomis shows off her artwork, the original design for the CM Skullies logo.

A Purple Heart medal, given to military members who are injured in combat, is on display inside Nick Loomis' home.

Abrianna Loomis hugs her husband, Nick Loomis, inside their Elmwood Park home. They've been married since May 2008, three years after Nick returned home from Iraq, injured.

Nick Loomis, 35, points to where the shrapnel came through his leg during a 2004 mortar attack while serving with the Army in Iraq.