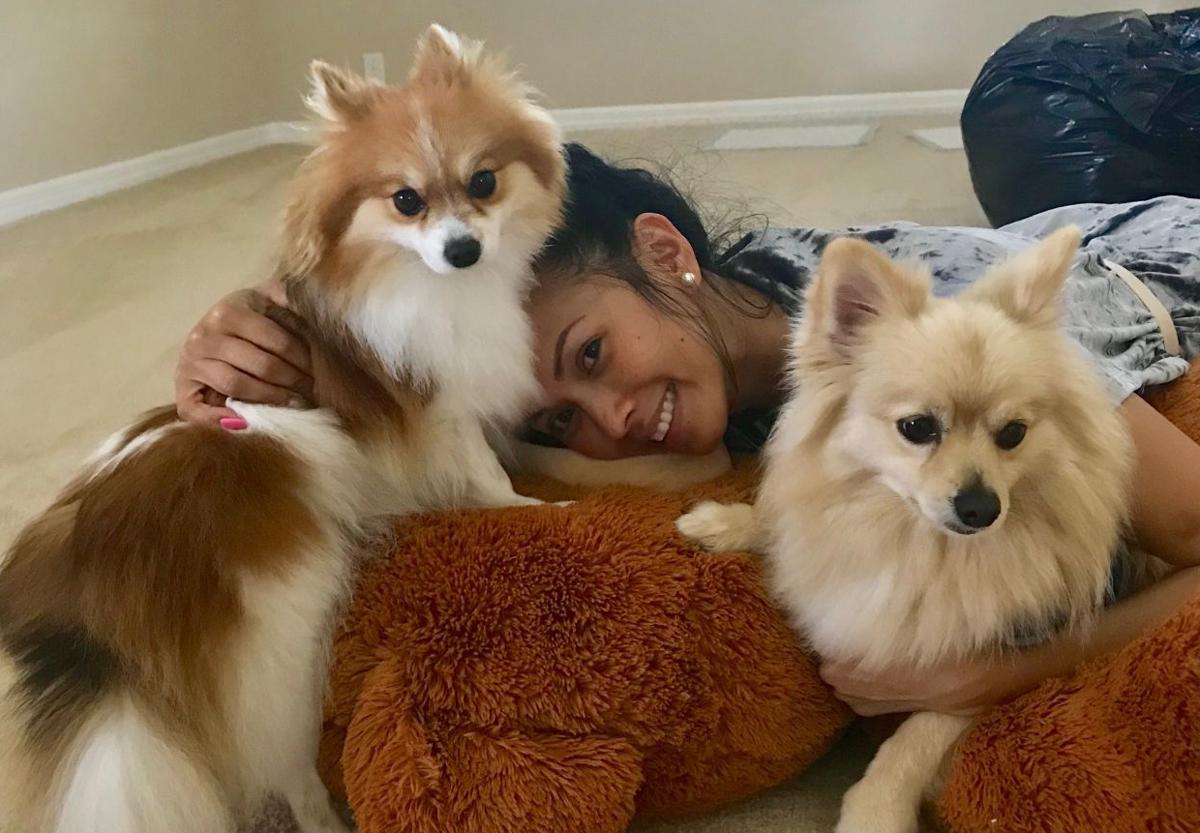 Tia Cao smiles with her two Pomeranians, Michi and Suki. The dogs are certified emotional support animals, according to a document provided by Cao's boyfriend, John Miller, who has a condominium at Lakeshore Towers, 333 Lake Ave. The condo complex and its board are caught in a debate regarding which rules can be bent to accommodate ESAs and which cannot. 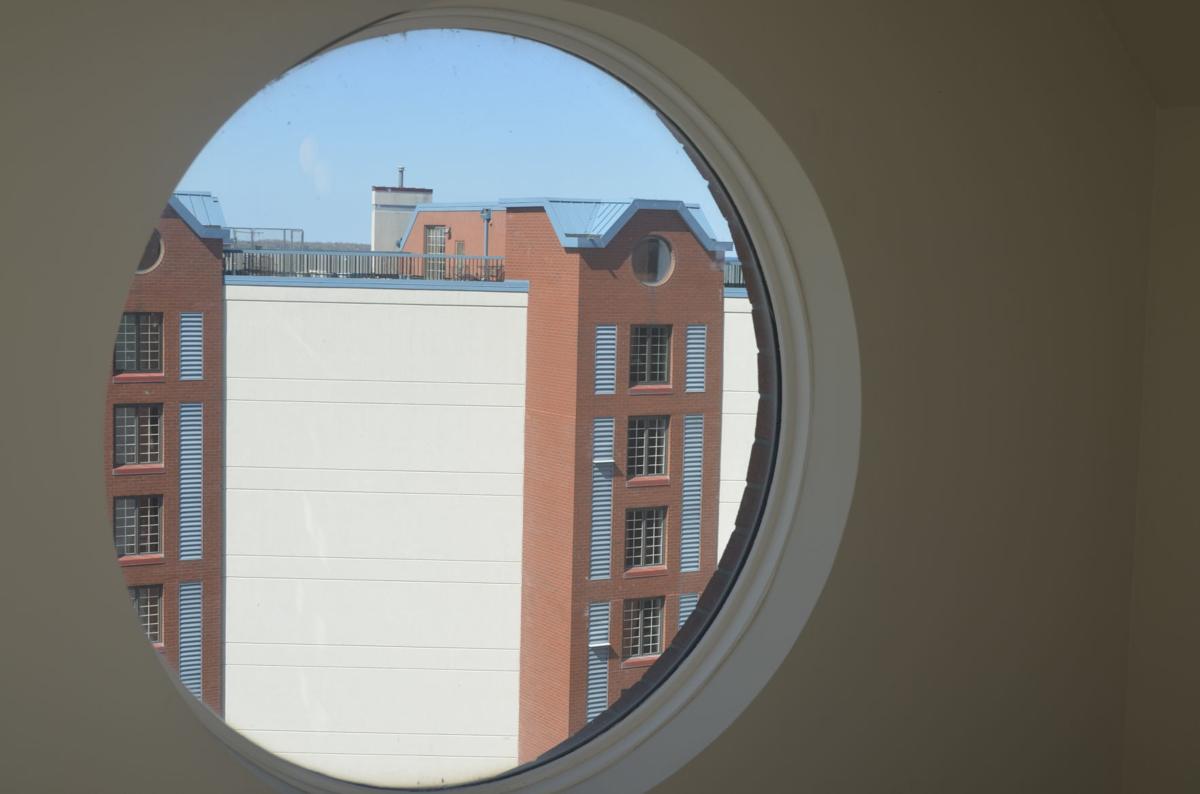 A view of Lakeshore Towers, 333 Lake Ave., from within one of the buildings.

RACINE — A lakefront condominium complex and its residents are grappling with seemingly conflicting federal and state laws regarding the hot-button debate surrounding assistance animals.

Earlier this summer, John Miller, 49, and his girlfriend, Tia Cao, had two dogs living with them at Lakeshore Towers, 333 Lake Ave. The dogs, both Pomeranians weighing less than 10 pounds each, are certified emotional support animals, according to a document provided by Miller.

However, Lakeshore has a strict one pet maximum per residence. A grievance was filed against Miller, who now faces a fine and was asked to remove the dogs. But he thinks the dogs, which belong to Cao, should be exempt from the rule because of their assistance animal designation.

The president of Lakeshore’s board of directors, Martha Deming, told The Journal Times that if the dogs were service animals, then the rule could be waived. But she maintains that emotional support animals don’t receive the same protection.

“(Miller) tried to turn it into a service dog issue, which it is not,” Deming said.

The laws defining ESAs and service animals aren’t perfectly clear, especially since Wisconsin’s state law is stricter than federal law, which is what leaves this specific case up in the air.

Miller, who works as a pilot for Southwest Airlines and also has a residence in Florida, paid off his first-floor condo at Lakeshore Towers eight years ago, planning to use it as a vacation home. But the association’s restriction on his girlfriend’s assistance animals is now limiting his use of the condo.

According to the U.S. Department of Housing and Urban Development, an assistance animal is “Any animal that works, provides assistance, or performs tasks for the benefit of a person with a disability, or provides emotional support that alleviates one or more identified symptoms or effects of a person’s disability.” To get an assistance animal, approval from a licensed health professional is necessary.

“An assistance animal is not a pet,” according to the Fair Housing Act, which is administered by the U.S. Department of Housing and Urban Development. This means that if somebody has an ESA or service animal, then the animal is allowed to stay in a residence even if there is a rule prohibiting pets.

“Assistance animals” is a blanket term referring to both service animals and emotional support animals.

More than $8,500 worth of marijuana found

Service animals are trained to carry out tasks for their owner, such as seeing-eye dogs or seizure-alert dogs, and have increased protections under federal law.

ESAs do not necessarily have specific training, but are often prescribed to treat the symptoms of depression, anxiety or stress, as is the case with Cao.

The handler is unable to control the animal.

The animal is not housebroken.

The animal poses a threat to the health and safety of others, or of the property itself.

Wisconsin law is similar to the federal law. However, Wisconsin law pertaining to emotional support animals requires that the doctor signing off on the need must be licensed in the state.

The mental health counselor who signed off on Cao’s ESAs is licensed in North Carolina and Florida, but not in Wisconsin, according to a document provided by Miller.

Wisconsin is one of only six states that have a specified ESA definition, according to Rebecca Wisch, a researcher and attorney with Michigan State University’s Animal Legal & Historical Center. The other 44 states just follow HUD’s guideline.

“Really, there is no difference between the two (service animals and ESAs) for housing except that service animals have public access within a housing complex whereas ESAs do not, like to a restaurant in the complex,” Wisch said in an email. “I would say, no, a landlord in Wisconsin cannot undergo a different process for a service animal vs. an ESA.”

In general, federal law is supposed to overrule state law, although this isn’t always enforced and sometimes states are allowed to make laws stricter than the national baseline.

“The state is taking away protections ensured on a federal level,” said Brendan Saunders, the City of Racine’s housing and community development specialist.

“I don’t think (the Wisconsin Legislature) could say that (the health professional) has to be a licensed in the state,” added Monica Murphy, the managing attorney for Disability Rights Wisconsin.

According to Miller and to Deming, the grievance only alleges that the one-pet limit had been broken and that the dogs were not service animals. It doesn’t mention Wisconsin’s possible loophole.

Saunders saw this kind of debate coming. He spoke with The Journal Times in May about this loophole before the grievance against Miller was filed. As of last week, Saunders said, he wasn’t been aware of any other assistance animal challenges in the City of Racine.

“(People) do have rights to a support animal,” Saunders said. “If there’s a case that comes up with problems, I could see a (legal) challenge … we in Racine support the rights of those with companion animals.”

Miller, a Navy veteran who grew up in Sturtevant, said that the dogs sometimes yip briefly when doors are slammed or people outside are shouting, but it’s usually brief and they’ve never bitten anyone.

The resident who filed the grievance lives on the fifth floor, Miller said.

“The fifth floor, c’mon!” Miller said, claiming that “it’s impossible” for the noise to carry that far.

At the board’s monthly meeting on Aug. 14, Miller said that he and several neighbors defended the dogs staying in the apartment, saying that they were both well-behaved and should be exempt from the one-pet rule.

Miller’s next-door neighbor wrote a letter to the board, supporting Miller’s and Cao’s case.

“In our unit,” the neighbor wrote, “we could not hear the dogs barking, and they were in no way a nuisance to us.”

Two members of the board motioned to fine Miller, according to the minutes from the meeting, but then the board decided to table the matter until its September meeting so that Lakeshore’s attorney could be consulted.

“If the animals are a nuisance or are a danger to someone, then (the grievance) does have a claim,” Saunders said. “I’d rather this case focused on the person’s disability, on their need for the animal.”

“I have three options right now,” Miller said. “I can occupy the unit by myself, which I’m not going to do. The other option is rent the unit, which (the board is) not going to allow. And three, sell the unit.”

Miller said that he won’t be able to attend the board’s next meeting in September because of work obligations. The board could make a decision without him present.

Miller said that he would prefer to be able to visit his condo freely with his girlfriend and her Pomeranians in tow, but Cao said she doesn’t want to go back because of the feeling of judgment she’s perceived coming from neighbors.

“Tia has no desire to be up here anymore with the dogs,” Miller said. “I come back from the gym and my girlfriend is on the couch crying, begging to go home, literally begging to go home … (She has to) go through the gauntlet of people raising their eyebrows at her and making snide remarks. It’s really sad.”

The vast majority of service animals in the U.S. are dogs, but there are very few species restrictions on ESAs.

This has led to people owning emotional support ducks, ferrets, pigs, and at least one emotional support kangaroo in Beaver Dam, which made national headlines when the marsupial and its owner were kicked out of a McDonald’s for breaking health code violations in 2015. The City of Beaver Dam definitively banned “service kangaroos” soon after the incident.

Airline companies have become more restrictive regarding service and assistance animals as well. Starting Sept. 17, only one support or service animal will be allowed per passenger on flights with Southwest Airlines, Miller’s employer, and the passenger must provide a letter from a doctor illustrating their need for the animal before the flight. Other airlines have similar rules.

Murphy found it odd that Cao had been provided two emotional support animals, since every assistance animal should serve a specific function, and Murphy wasn’t sure what difference having both Pomeranians would make compared to only one.

“To my knowledge, no federal court has squarely dealt with the issue of multiple ESAs,” Wisch said.

Either way, both were explicitly approved by Cao’s counselor, according to the document provided by Miller.

Saunders and Murphy both said that companies and legislatures are tightening their assistance animal rules to prevent people from trying to scam the system. There are websites that sell “emotional support animal vests,” certificates and “therapist certificates” that hold no legal bearing, but simply provide the illusion that the animal is doctor-approved. Some of these sites are trying to advocate for assistance animals and their owners, others are just trying to make a quick buck, according to Murphy.

Murphy pointed out that the laws are still messy and relatively unclear.

“What may happen with emotional support animals is we’ll see stricter rules, because right now there’s no definition of what they can or can’t be.”

CALEDONIA — Dog owners will get some forgiveness if they miss the deadline to license their dogs, despite at least one Village Board member’s …

Tia Cao smiles with her two Pomeranians, Michi and Suki. The dogs are certified emotional support animals, according to a document provided by Cao's boyfriend, John Miller, who has a condominium at Lakeshore Towers, 333 Lake Ave. The condo complex and its board are caught in a debate regarding which rules can be bent to accommodate ESAs and which cannot.

A view of Lakeshore Towers, 333 Lake Ave., from within one of the buildings.