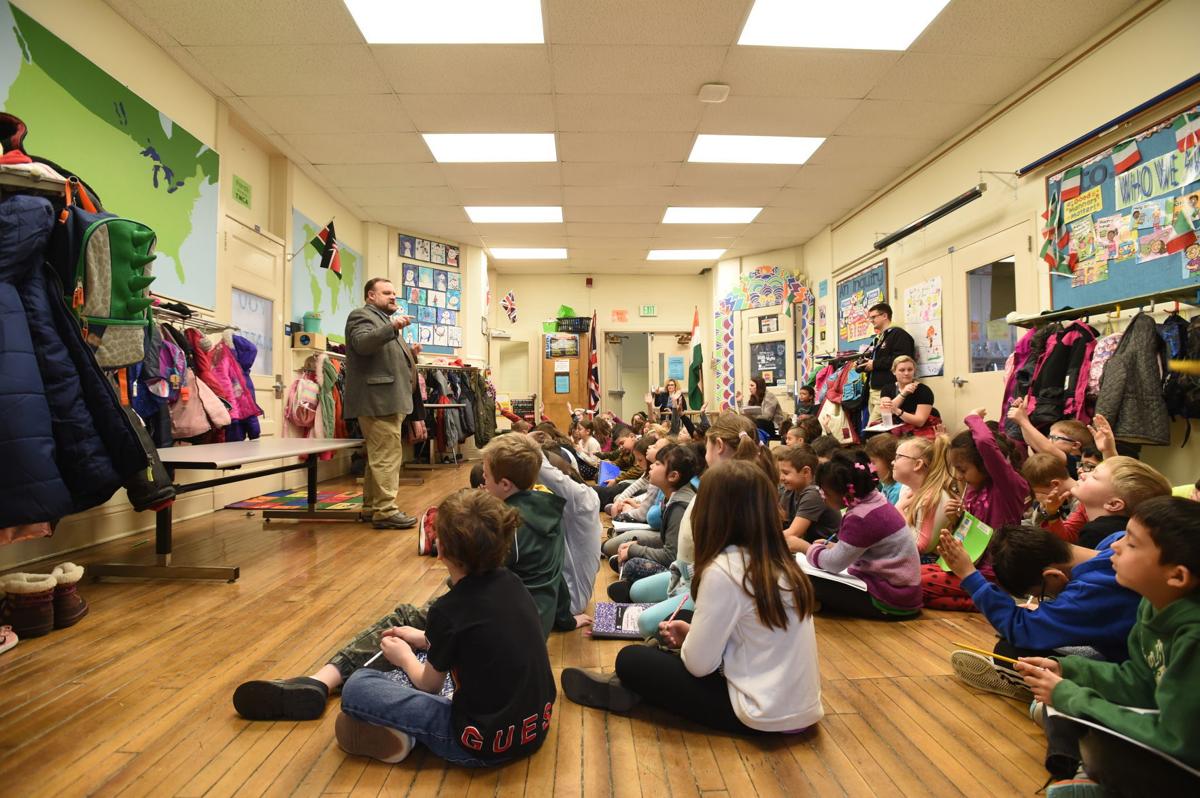 Racine Mayor Cory Mason takes a vote of Jefferson Lighthouse second-grade students during a visit to the school on Jan. 7. Students voted to pick a class mascot. Dolphins beat out lighthouses, 30-26. 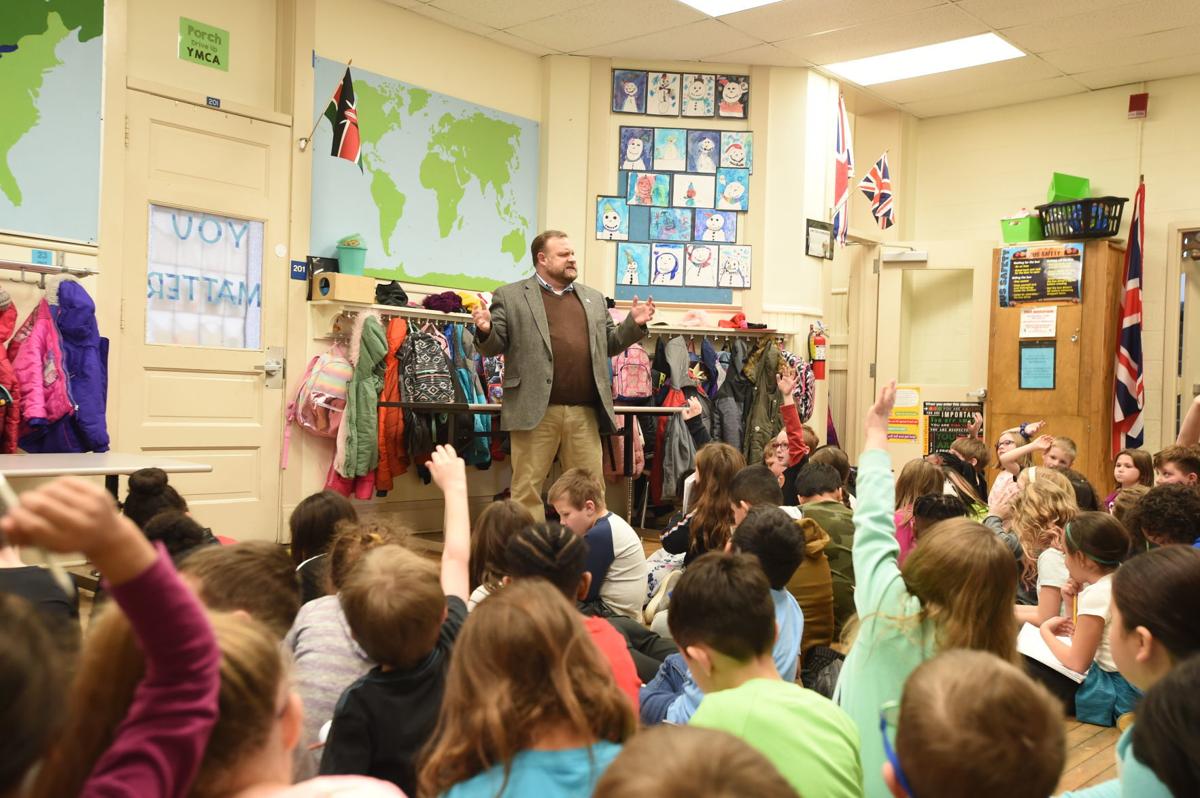 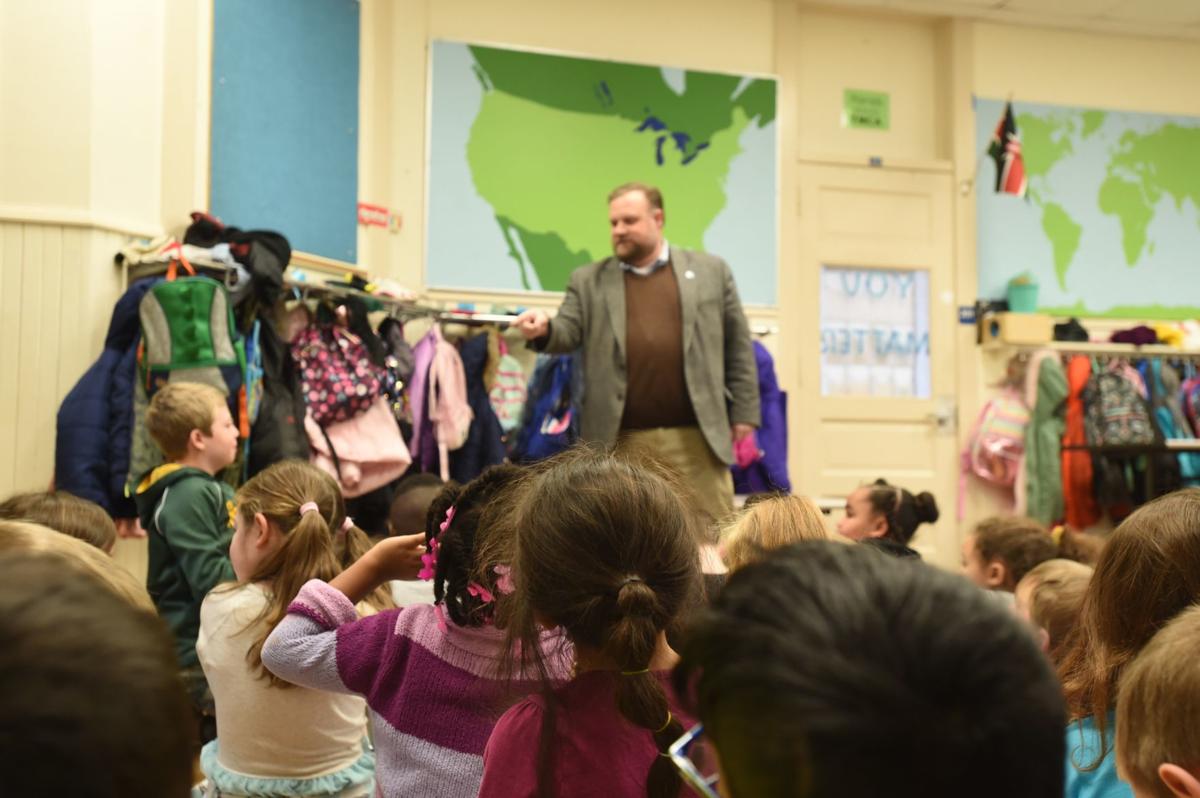 Racine Mayor Cory Mason speaks with Jefferson Lighthouse second-grade students about the way the government and elections work in the United States.

RACINE — “How do you become mayor?”

“What’s your favorite part of your job?”

“How long can you be mayor?”

“What does the Water Department do?”

These are just a small sampling of questions posed to Racine Mayor Cory Mason by a group of second-grade students during his visit to Jefferson Lighthouse Elementary School on Jan. 7.

Mason answered questions from many of the almost 60 students in the room and spoke to them about how national, state and local government work in the United States. On their own the students named the president and governor and identified Mason as the elected executive in charge of Racine.

The mayor told the students how important it is that each citizen over the age of 18 gets one vote, no matter their gender or what they look like.

He also told the students that people of any age, including the second graders, can call their elected officials and give their opinions on things like the importance of summer vacation, for example.

“Even though you don’t have the right to vote yet, you can still contact your elected officials,” Mason said.

Mason’s visit to the school was a part of Jefferson Lighthouse’s International Baccalaureate curriculum, during a curriculum unit called “How we organize ourselves.”

The central idea of the unit is how citizens create structure with a focus on systems, interdependence, citizenship and elections.

Every year, each grade at Jefferson completes six units, each with a different focus. During each unit students take part in some kind of community engagement, such as a visit from a community member, like the mayor, or a field trip, according to Colleen Strain, Jefferson’s IB coordinator and associate principal.

At the end of each unit students are invited to take some sort of action. For this unit that might mean teaching another student or family member about government, or taking a mock vote at home with family.

Mason led a mock vote in the classroom for students to pick their class mascot. After a debate on the merits of the dolphins over the lighthouses, dolphins won 30-26.

Mason encouraged the students who were interested to run for office one day. The mayor said that he visits schools to speak with students whenever he gets a chance.

“It’s a great way to connect with young people,” he said.

“Even though you don’t have the right to vote yet, you can still contact your elected officials.” Cory Mason, Racine mayor

“Even though you don’t have the right to vote yet, you can still contact your elected officials."

SOMERS — A groundbreaking, week-long criminal justice course wrapped up with one of the most dramatical scenes ever created at the Black Box Theatre on Saturday at the University of Wisconsin-Parkside.

BURLINGTON — On Friday night, five Burlington High School alumni who have made noteworthy achievements and contributions to society will join …

Racine Mayor Cory Mason takes a vote of Jefferson Lighthouse second-grade students during a visit to the school on Jan. 7. Students voted to pick a class mascot. Dolphins beat out lighthouses, 30-26.

Racine Mayor Cory Mason speaks with Jefferson Lighthouse second-grade students about the way the government and elections work in the United States.