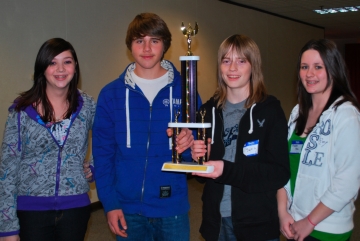 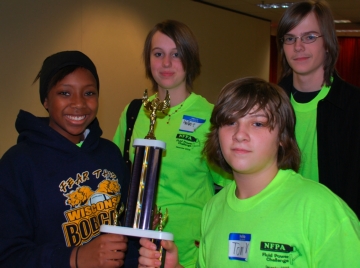 All Mitchell Middle School students in the Gateway to Technology classes built fluid power machines as part of Project Lead the Way, a national standard for science, technology, engineering and math education. The program prepares students for engineering careers. It is sponsored by the National Science Foundation.

Twelve Gateway to Technology students were chosen for the three Mitchell Middle School teams. Each team was made up of two boys and two girls. They had four weeks to develop and build a working prototype of a four-function, three-axis hydraulic lifting machine. They did this during their eighth-grade technology education classes. Their machines had to meet very specific specifications.

A camera crew from Channel 10 followed their progress as part of a documentary called, "Innovations in Science, Technology, Engineering, and Math Education." It will be a reality show illustrating the excitement of science and technical education using real students. In November they filmed the Mitchell Middle School students in action at MSOE and again, later in the classroom.

Each group had to submit a technical report on their machine as part of the overall point total.

All teachers were removed from the room for a tour of the MSOE fluid power engineering labs. The student groups were then given three hours to build a second version of their hydraulic lifting machine, using only their tools, a box of materials and the technical report containing the plans they drew. Judges circulated throughout the room, grading the groups on teamwork, cooperation, technical skills and answers to the judges' quiz questions.

The students worked non-stop, furiously measuring, cutting wood, gluing parts and checking their work against their plans. They worked straight through lunch, with some groups placing the last components and trouble shooting problems in the final seconds.

The teachers returned to join the crowd of students and judges to watch the teams from each school operate their machines in the Fluid Power Challenge. Points were scored for each object successfully picked up and moved with fluid power during a 2 minute round.

There were many tense moments in the competition. Machines broke down. Strategies failed. A month's worth of preparation led up to this final test. The camera crew caught all the drama on tape.

Mitchell Team two scored early by placing a three-point cylinder on the delivery shelf, but then lost all their points when they knocked it off trying for a second three-point score.

The teams from Starbuck Middle School and Greenfield Bilingual Academy turned up the heat by repeatedly scoring points during their two-minute rounds. They were tied for first place with eight points each.

Mitchell Middle School Team One drew the last round. The pressure was on. A last minute change in their communication plan got them off to a shaky start. They barely scratched together three points in the first minute. With time slipping away, they regrouped and

re-emerged to score six more points in less than 20 seconds. This put them in the lead with nine points.

While the students cleaned up, the judges met to total each team's points in the areas of design, structural stability, teamwork, technical knowledge, engineering portfolio and machine performance. They had to decide the winner in each category, including Overall Champion.

The teachers, parents, judges and teams assembled one last time for the presentation of the National Fluid Power Challenge 2009 trophies.

NFPA participants from Mitchell Middle School and their teachers attended the premiere of Innovations in STEM Education in January at Discovery World in Milwaukee. The video is scheduled for nationwide distribution to educators and classrooms this spring.

The Fluid Power Challenge is a skills competition for eighth-grade students, intended to expose students and teachers to engineering problem solving using fluid power technology. Students then are encouraged to select high school courses in math, the sciences and technology education that will lead to post-secondary studies and, eventually, careers in fluid power.

The Challenge is meant to complement the fluids section in science and technology classes and give students the hands-on experience of designing, building and demonstrating a fluid-power based mechanism to solve an assigned problem.

Students are encouraged to continue math and science courses in school, acquire numerous skills throughout the competition and are exposed to careers that involve fluid power and other technologies.

Industries in the Racine area have had a long history of invention and innovation in the fluid power industry. Local industry sponsors of the National Fluid Power Challenge include Air-Logic, Bosch Rexroth, and Racine Federated Inc.

School always was a refuge for Kalyn Holland. That has changed. Jeanne Schierstedt, a teacher at Case, said anxiety levels at the high school have “grown appreciably since September.”

What Mitchell School teachers are saying about what they face every day, and how they still love every kid

"I’m exhausted." "You can’t reach every kid." "Let’s love one another." "The district needs to help us help these kids."

RACINE — When Austin Kechter arrives at DeltaHawk Engines, he goes to his second-floor cubicle, checks his email and reviews his daily tasks w…

What's in store for every RUSD school?

Is your alma mater being updated? Turned down? Transformed?

‘Something we all needed’ | Mitchell training intended to help staff, student emotions

Priscilla Marquez knew something needed to change. When students become upset, teachers do not always know how to respond. “Last year was a year like none other,” Marquez said. “Every day it was trying to adjust to getting back to somewhat of a normal year.” That is why Marquez, principal of Mitchell K-8 School, wanted professional development training for staff regarding emotional regulation.