RACINE — Tim Mutterer is one of the busiest people you may ever meet. You might recognize him as a late-night pizza delivery driver for the Domino’s at 5100 Washington Ave.

But besides delivering the steaming disks of dough for the company, he also tends to the petunia flower garden in front of the store’s sign.

And away from Domino’s, Mutterer can be found playing the clarinet, singing at a baseball game, giving back to his community through service groups or lecturing about the American presidents — of which he has an extensive knowledge.

Mutterer has worked at Domino’s for five years, which is most of the time that he’s spent living in Mount Pleasant.

Planting there has been an annual undertaking for him. He planted 92 petunias in May.

“I love doing this. It’s just one of the joys of life,” Mutterer said. “Earlier this year, I said, ‘even if they tear the road up this year, I’m still planting my petunias.’”

Every year he tries to make a pattern, but experiments with different arrangements. In years past, he’s tried making flowers into the shape of a pizza. This year he placed red, white and blue flowers on the left side and then violet scattered throughout the right side.

The violet petunias were new this year and they “exploded,” he said.

“The flowers are high enough for people to see as they’re driving past,” Mutterer said.

In addition to the Domino’s plot, Mutterer borrows land near Swan’s Pumpkin Farm in Caledonia to garden. Many of his Facebook friends garden as well and it’s a mini-competition among them for the best plot, he said.

He is impressed by other flower displays in front of homes and businesses.

“There’s just little pockets of beauty all over Racine,” he said.

During the COVID-19 pandemic, things have been very busy at Domino’s and Mutterer has worked 70-80 hours a week. Since March 1, he’s had two days off. Gardening has provided a safe haven for him.

“I love gardening,” he said. “It lets you relax. You wouldn’t think pizza delivery would be a stressful job; it can be. (Gardening is) just a great way to enjoy what the good Lord gave us.”

His hobby came from his parents after his father allowed him to grow and sell his own watermelons at age 8 for 3 cents per pound.

While his favorite flowers are roses, he loves petunias because he enjoys the color splash and his mom used to grow them.

Mutterer has been watering the flowers at Domino’s and pruning or deadheading them daily. But he doesn’t mind tending to them every day — he thinks of them as his summer project.

Because of the shade from the Domino’s sign and the care he’s been providing, he anticipates they will last until the first day of frost this fall.

Gardening is just one of many of Mutterer’s talents. He is also a lecturer and currently is studying for his doctorate degree. His main focus is who the presidents were as people, aside from the politics, up to the presidency of George H. W. Bush.

The studying takes place during his shifts. “When I deliver pizzas, it’s not about delivering pizzas. I’m working,” he said.

He turns on educational books on CDs on his car stereo, listening to information about the presidents.

Eventually he plans to tour nationally, full-time, bringing his lectures wherever he goes.

He’s gone around the area to veterans’ homes and the Racine Masonic Center to lecture and travels out of state as well. He has lectures lined up for Minnesota and Nebraska later this year. But for now, lecturing is just a part-time endeavor.

Mutterer is also a retired minister. He majored in history, earning a bachelor’s degree from the former Northwestern College in Watertown in 1982 and a master’s degree from Wisconsin Lutheran Seminary in Mequon 1987.

And, he’s a professional singer. He usually sings for all the Northwoods Baseball League teams. Some teams such as the Lakeshore Chinooks in Mequon have canceled their 2020 season due to the COVID-19 pandemic, but others such as the Green Bay Bullfrogs/Booyah have not. One day he hopes to sing for the Milwaukee Brewers.

He sang the national anthem numerous times for long distance runs in Wisconsin as well, including the Ice Age Trail 50 in La Grange in Walworth County and for the Wisconsin Marathon.

“Almost every weekend I’m gone singing at two or three venues,” he said. However, some of the distance runs he was planning on singing at this year have been canceled.

Mutterer began running himself in 2001 and that’s when he found there was a lack of patriotism before each run. He wanted to start singing the anthem for as many runs as he could.

He’s also involved in Preservation Racine, Inc., and is a part of three concert bands in the Southeastern Wisconsin area, playing clarinet. He can also play violin, trumpet and keyboard. He’s additionally involved in a few service groups including the Oak Creek Lions Club.

He is grateful that Domino’s management is flexible with his working hours to allow him to do all of these community activities. He enjoys being busy, and for him, it’s all about giving back.

“Whatever you’re doing, if you can find a way to be a part of your community and to invest in it,” he said. “Instantly, (you find) unique people you’d never meet any other way, and you get to become a part of what’s going on.”

But of all of his hobbies, he likes gardening the most.

“It’s one of the things that just slows you down,” he said. “It’s quiet, despite all the traffic (along Washington Avenue). You can see the results. I get to enjoy something just incredibly beautiful.”

Keeping Cool In The Pool

“I love doing this. It’s just one of the joys of life. Earlier this year, I said, ‘even if they tear the road up this year, I’m still planting my petunias.’” Tim Mutterer, pizza delivery driver and gardener

“I love doing this. It’s just one of the joys of life. Earlier this year, I said, ‘even if they tear the road up this year, I’m still planting my petunias.’” 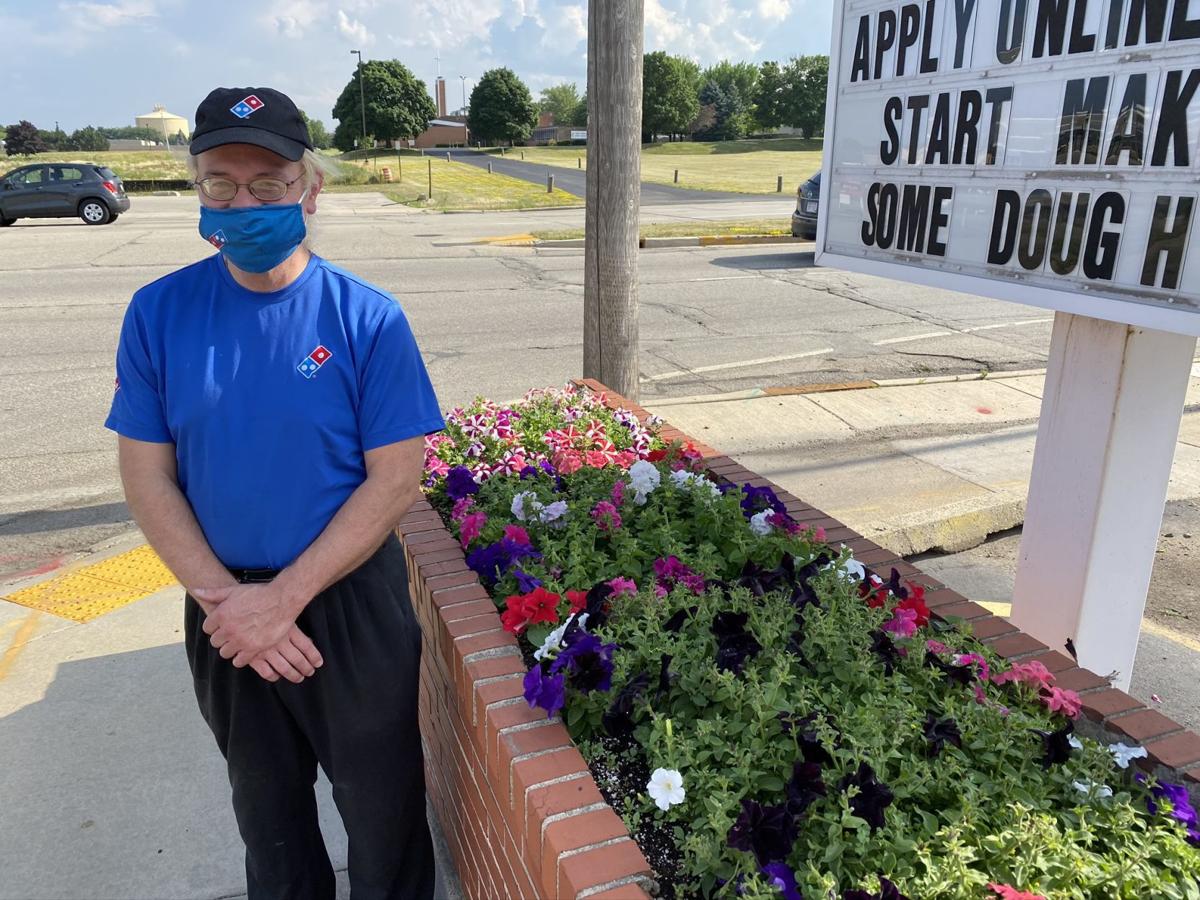 Tim Mutterer of Mount Pleasant tends to the petunia flower garden in front of the Domino's sign at the 5100 Washington Ave. location in Racine. Away from Domino’s, Mutterer can be found dabbling in several other areas of interest throughout southeastern Wisconsin. 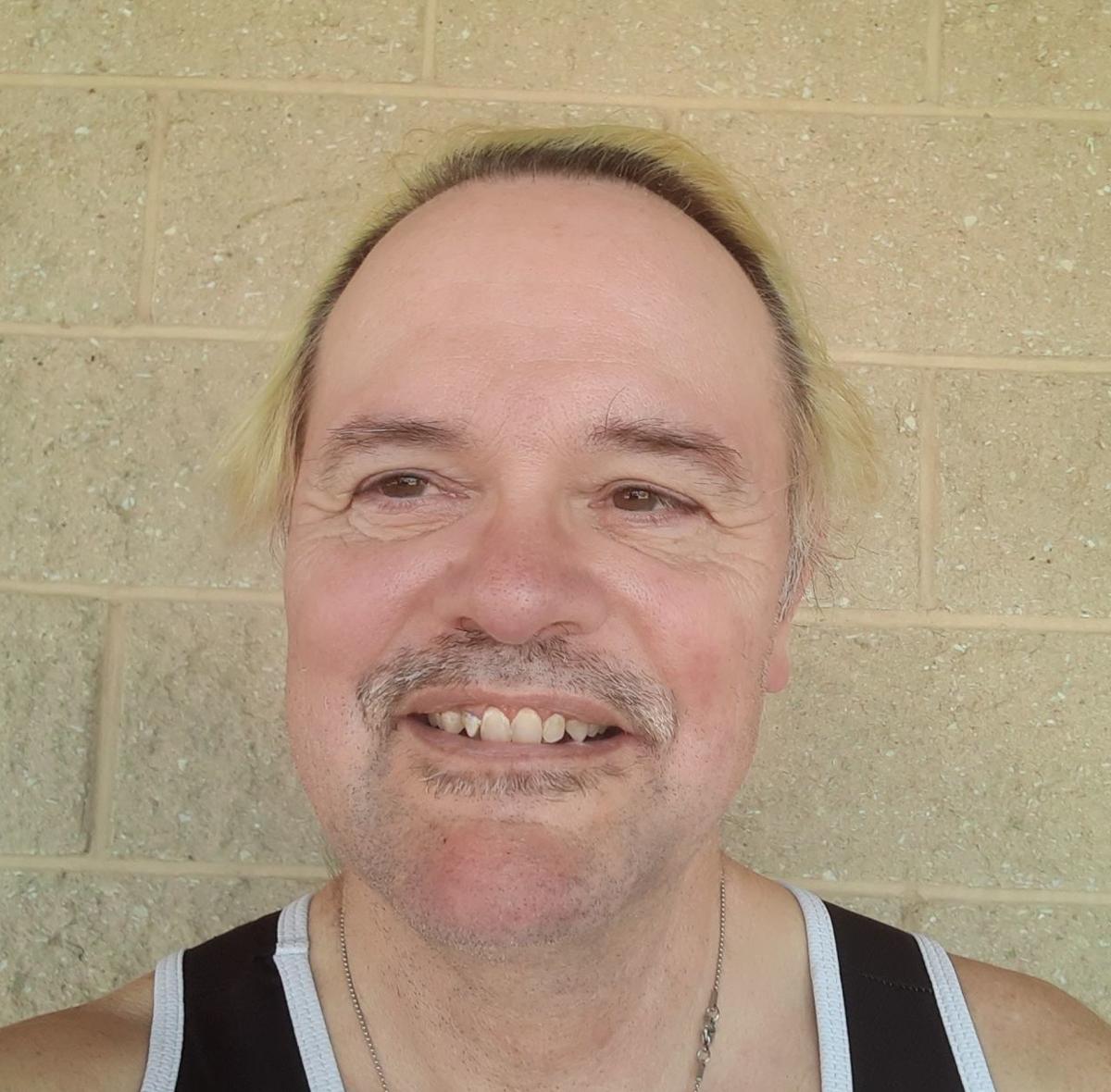