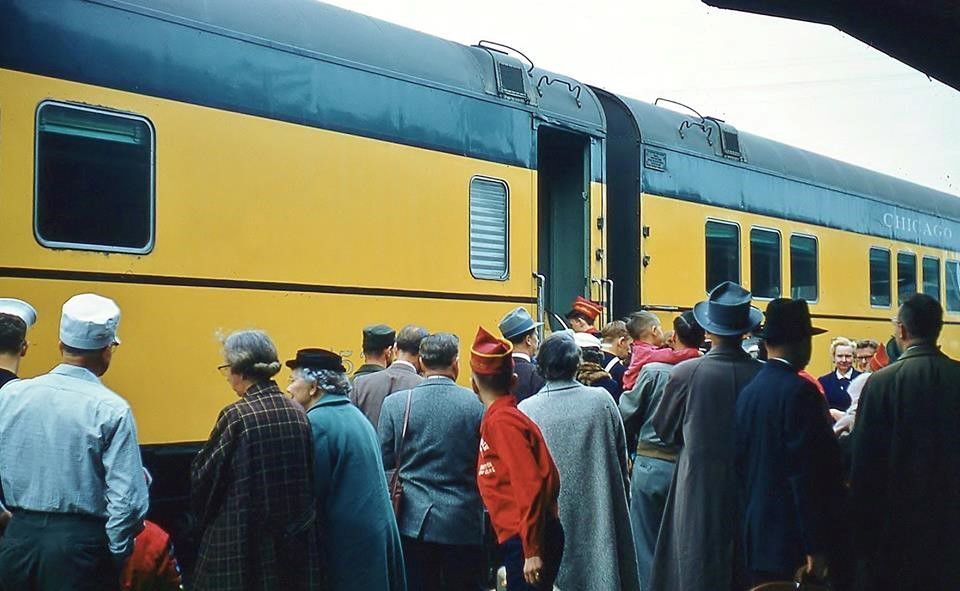 Passengers board the Chicago & North Western's streamliner train, the Twin Cities "400," in May 1956. The train was named The "400" back in 1935 because it ran between Chicago and the Twin Cities in under 400 minutes. The train stopped in Racine. It had a top speed of 117 mph with diesel locomotives. It ran even faster with steam engines in the late 1930s, reaching speeds of 120 mph. 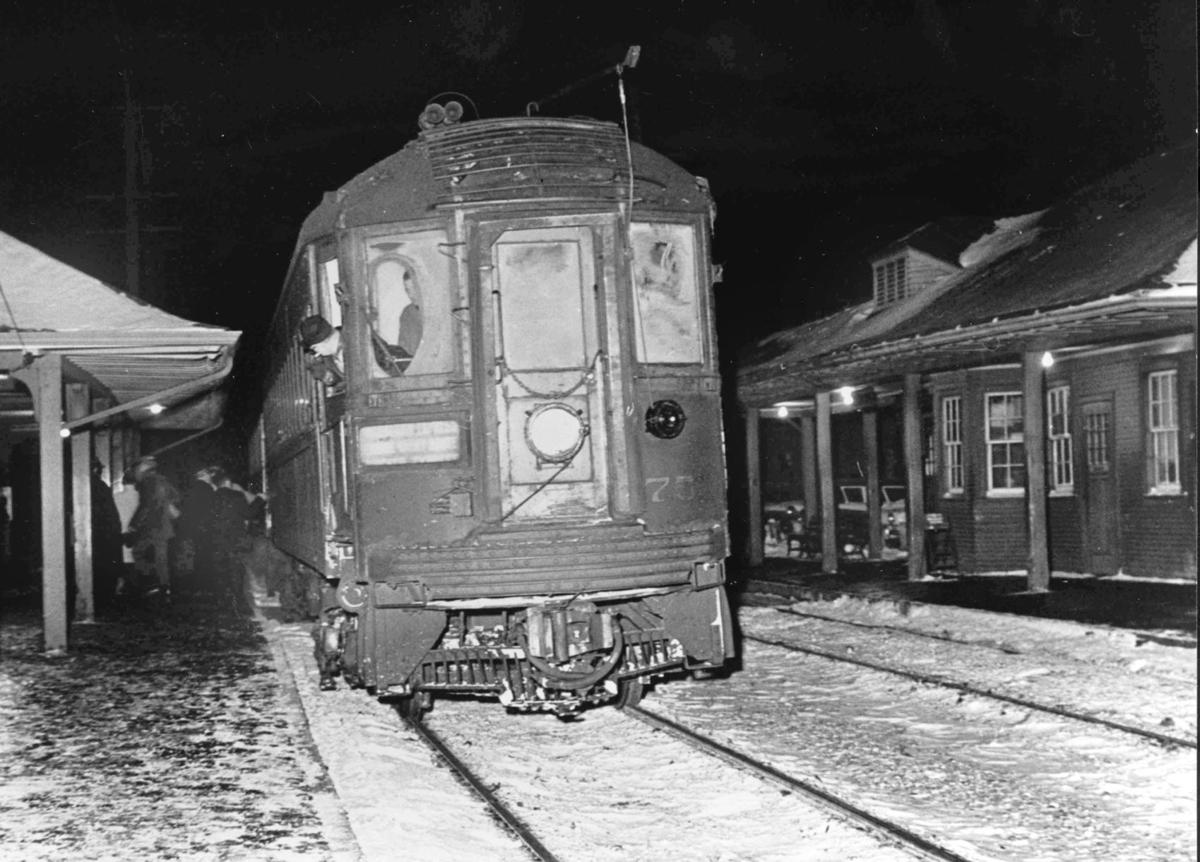 The final North Shore train prepared to leave the Racine station near the corner of Washington Avenue and West Boulevard. It was 2:12 a.m. and the temperature was 15 degrees below zero on Jan. 21, 1963, when motorman Francis Murray heard the final “All aboard!” and pulled out of Racine for Milwaukee. The expansion of interstate highways since the 1950s had been eating away at the North Shore’s profits, spelling doom for the beloved interurban railroad.

RACINE — Fifty years ago, in the spring of 1971, the last commuter train left Racine.

Now, community leaders are looking to the past and asking: Could a commuter train could help cure some of the region’s economic woes?

In the past century, the country has shifted from train travel to automobiles. Simultaneously, the government focused its public infrastructure money on roads connecting the suburbs to commercial districts, but there were communities left behind because they were not close enough to freeways to benefit.

Racine is one of those communities. However, Racine’s City Council is gung-ho about about pursuing federal dollars to bring about the proposed KRM — a Kenosha Racine, Milwaukee commuter train — in order to link Racine to economic opportunities of the region.

“It’s probably the best opportunity for growth and development in Racine,” he said, “especially the heart of Racine.”

With infrastructure money from American Jobs Plan, a Kenosha-Racine-Milwaukee commuter train could be revived

Presidential glory: Chicago and North Western engine No. 608 was photographed by Ben LaMarsh in Kenosha on July 4, 1889, before it left on its…

Kohlmann is a railroad historian and author.

If someone wants to know about commuter trains in Racine, Kohlmann is one of the people to talk to. He wrote his master’s thesis on Racine’s trains.

He explained there were commuter trains connecting Milwaukee, Racine, Kenosha and Chicago as early as 1855. That’s six years before the beginning of the Civil War.

“The city and this region were built and settled based on commuter trains,” he said.

Racine's railroad history stretches back to the 1800s

At one time, Racine had hourly service from one of three commuter trains, including the Chicago North Western and the interurban Chicago North Shore & Milwaukee Railroad, fondly known as the North Shore Line until its demise on Jan. 21, 1963. There was also the MRK, which linked Milwaukee, Racine and Kenosha.

Kohlmann said these were the days when Racine was a national leader in transportation.

As one example of this leadership, he noted Racine had one of the continent’s first interurban electrical trains, starting in 1892. And starting in about 1915, there was a hybrid training running from Sturtevant to Downtown Racine.

However, it was really the service between the region’s largest cities that provided the most benefit.

The convenience worked both ways. People who worked in Chicago but lived in Racine could get to work in less than an hour on the train — without having to battle traffic or find a parking spot. Those who lived in Chicago could also get away for the day could find themselves in Racine in the same amount of time. It’s not an accident some of the county’s golf courses are located so close to the old North Shore railroad tracks, Kohlmann noted.

As Kohlmann explained, trains were just faster than cars, traveling over 100 mph. People could move around the region expediently.

Trains were also safer than cars, he added. In the 112 years the commuter trains operated in Racine, they did not lose one passenger in a crash.

"The city and this region were built and settled based on commuter trains."

There were many factors that led to the end of the commuter trains through Racine. One of the major factors was the government’s investment in freeways to take people living in the suburbs to commercial centers for work.

Kohlmann said that, after Interstate 94/90 was put in during the late 1950s and early 1960s in southeastern Wisconsin, passenger volume decreased dramatically.

However, there was also a desire by the railroads to get out of the commuter train business, which was unprofitable Kohlmann said.

In 1971, the government struck a deal with the private corporations to shift passenger rail over to the control of Amtrak. The consolidation of rail service was used by the C&NW railroad to abandon service to Racine, he added.

While the establishment of the highway system was good for those folks who owned a car and were looking to move to the suburbs, it was devastating for urban centers like Racine.

Depending on the construction season or the weather, to drive back and forth to Chicago or Milwaukee could be considerable and for many untenable.

Racine’s population began to drop almost immediately after the last commuter train left the city. After decades of steady growth, between 1970 and 1980 the population dropped by 10,000 and has been slowly declining ever since, according to U.S. Census data.

For the poor and working class, who are less likely to have reliable transportation, the loss of commuter trains provided barriers to job access, city leaders have argued as they pursue bringing commuter rail back to Racine.

Their job opportunities were often limited to where they could get on Racine’s bus system — rather than the entire region encompassing Milwaukee, Racine, Kenosha, northern Illinois and Chicago.

Commercial centers, too, began to relocate closer to the freeway system, Kohlmann noted.

The lack of transportation to commercial centers where employment opportunities are greater is one of the leading causes of economic segregation, a situation where the working classes become isolated in urban areas, cut off from family-sustaining jobs.

For city leadership, pursuing federal dollars to bring a commuter train back to the Kenosha, Racine and Milwaukee, commuter trains makes sense.

Alderman Trevor Jung described Racine as being “on an island,” surrounded by regional economic opportunity, but lacking access to capitalize on it due to transportation barriers.

Kohlmann, too, sees the potential in a commuter rail — because circumstances have changed in the last 50 years since the last commuter train pulled out of Racine.

To begin with, the project under consideration is publicly funded. Previous commuter rails were owned by private corporations with pressure to profit.

For those people, Racine has many benefits, to include quick and easy access to Lake Michigan he said.

The generations after the Boomers just are not as excited about driving as their grandparents and are more likely to be looking for public transportation as they pick a community to live in.

These are all factors that could benefit those working to reestablish a commuter train in Racine.

Why should the government invest in infrastructure for Racine?

As Kohlmann noted, the government invests in large infrastructure all the time, but it has largely benefited those who live in the suburbs.

The ability for people to live in the suburbs and commute to commercial centers for work is supported by taxpayer dollars that funds the road projects that allows people to live where they live, he noted.

As an example, he recalled that the State of Wisconsin could have spent $31 million dollars 10 years ago for the KRM or it could have built a $31 million interchange in the middle of cornfields west of Milwaukee, called the Pabst Farms interchange.

It opted for the interchange. Ten years later, the cornfields are gone. The area around that cornfield is a commercial center with a hospital.

That is what he sees for Racine — if the federal dollars come through for KRM.

“When there’s investment in transportation infrastructure, it changes the way the city develops,” he concluded.

There have been two previous notable and unsuccessful attempts to fund KRM.

The 2007 attempt failed because Republicans would not get behind a $15 tax on rental cars that would have paid for it.

However, the state did fund the Southeast Regional Transit Authority to oversee the project. As part of that effort, a $2 tax was added to rental cars in Milwaukee, Racine and Kenosha to fund KRM, but the fund never collected enough money for the project.

The state legislature eliminated the funding for SRTA in 2013, and the collected revenue from rental cars was returned to the municipalities.

In photos: History of coal power in Racine

UN secretary general says 'the world must wake up'

UN secretary general says 'the world must wake up'

After more than a year of intensive restoration, the historic Chicago North Shore and Milwaukee Car 761 will be back in service after 58 years. You can see it in action starting Sunday.

Passengers board the Chicago & North Western's streamliner train, the Twin Cities "400," in May 1956. The train was named The "400" back in 1935 because it ran between Chicago and the Twin Cities in under 400 minutes. The train stopped in Racine. It had a top speed of 117 mph with diesel locomotives. It ran even faster with steam engines in the late 1930s, reaching speeds of 120 mph.

The final North Shore train prepared to leave the Racine station near the corner of Washington Avenue and West Boulevard. It was 2:12 a.m. and the temperature was 15 degrees below zero on Jan. 21, 1963, when motorman Francis Murray heard the final “All aboard!” and pulled out of Racine for Milwaukee. The expansion of interstate highways since the 1950s had been eating away at the North Shore’s profits, spelling doom for the beloved interurban railroad. 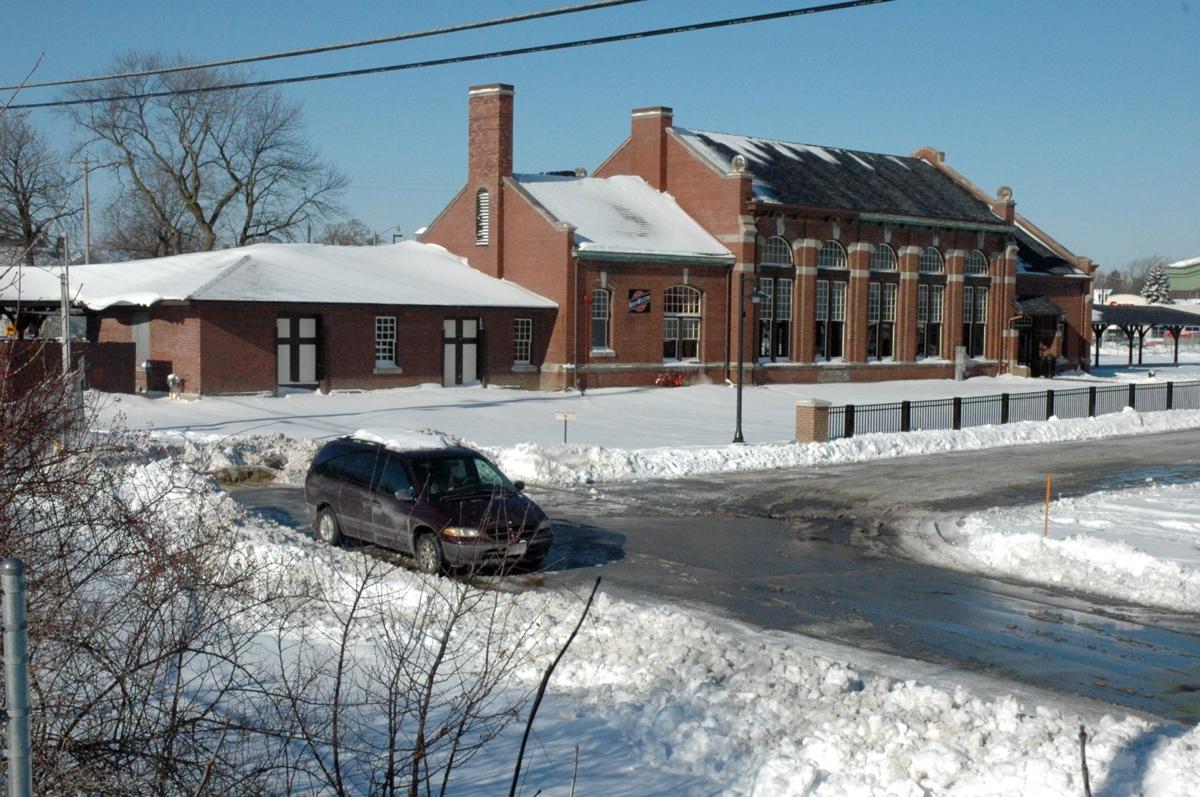