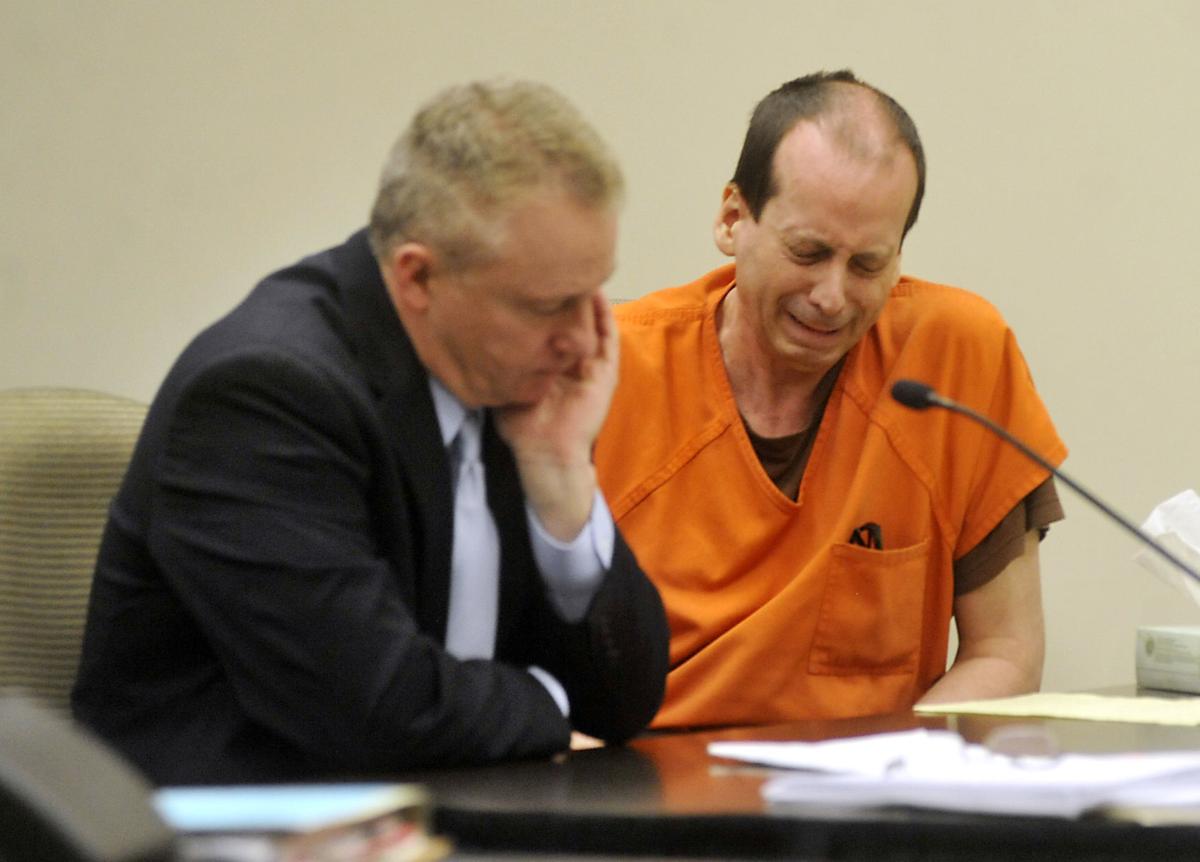 James Kivisto, right, cries as he apologizes to his victims Friday afternoon during his sentencing hearing before Racine County Circuit Court Judge Mark Nielsen. Kivisto was sentenced to 17 years, 3 months in state prison for video-recording girls and women in the restroom of his Wind Lake gymnastics studio. Shown with Kivisto is his attorney, Robert William Keller. 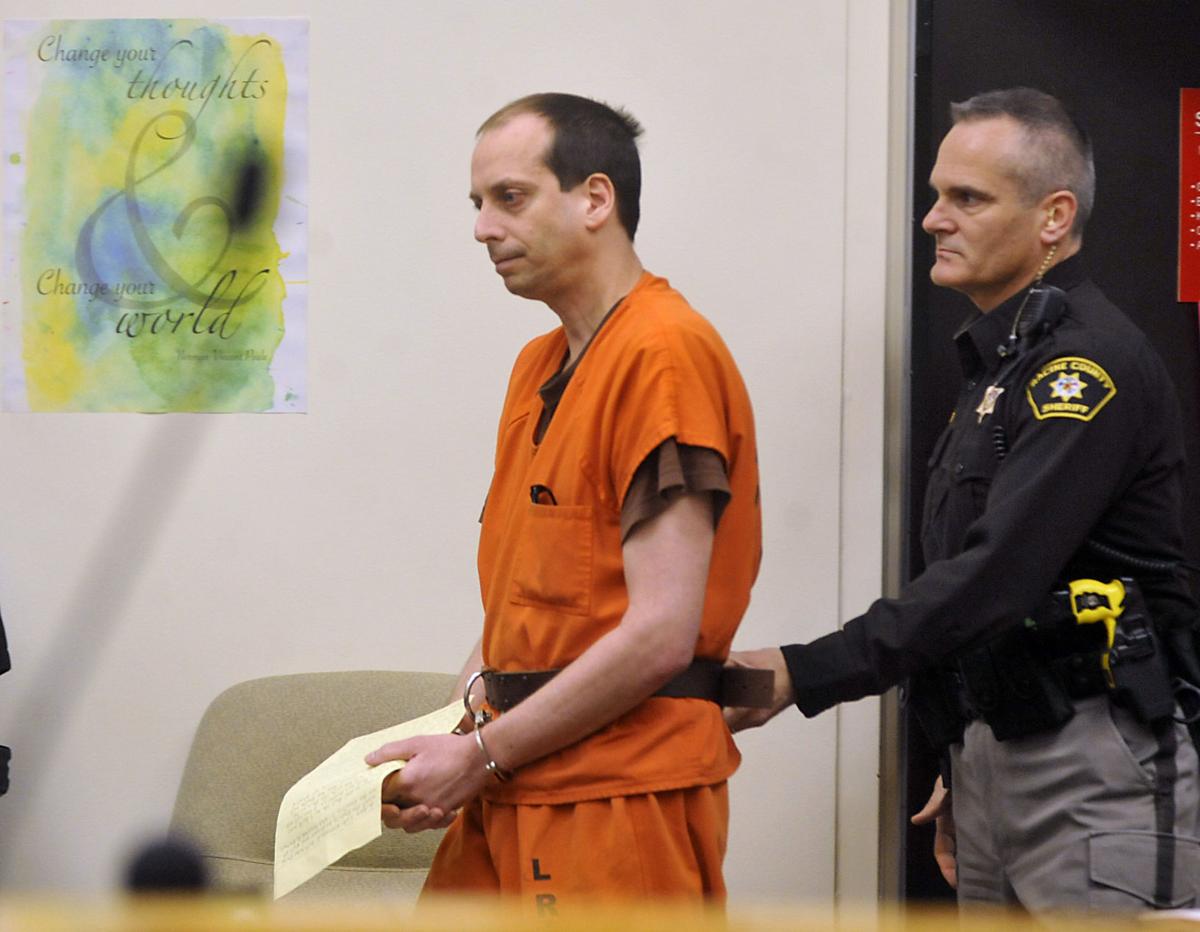 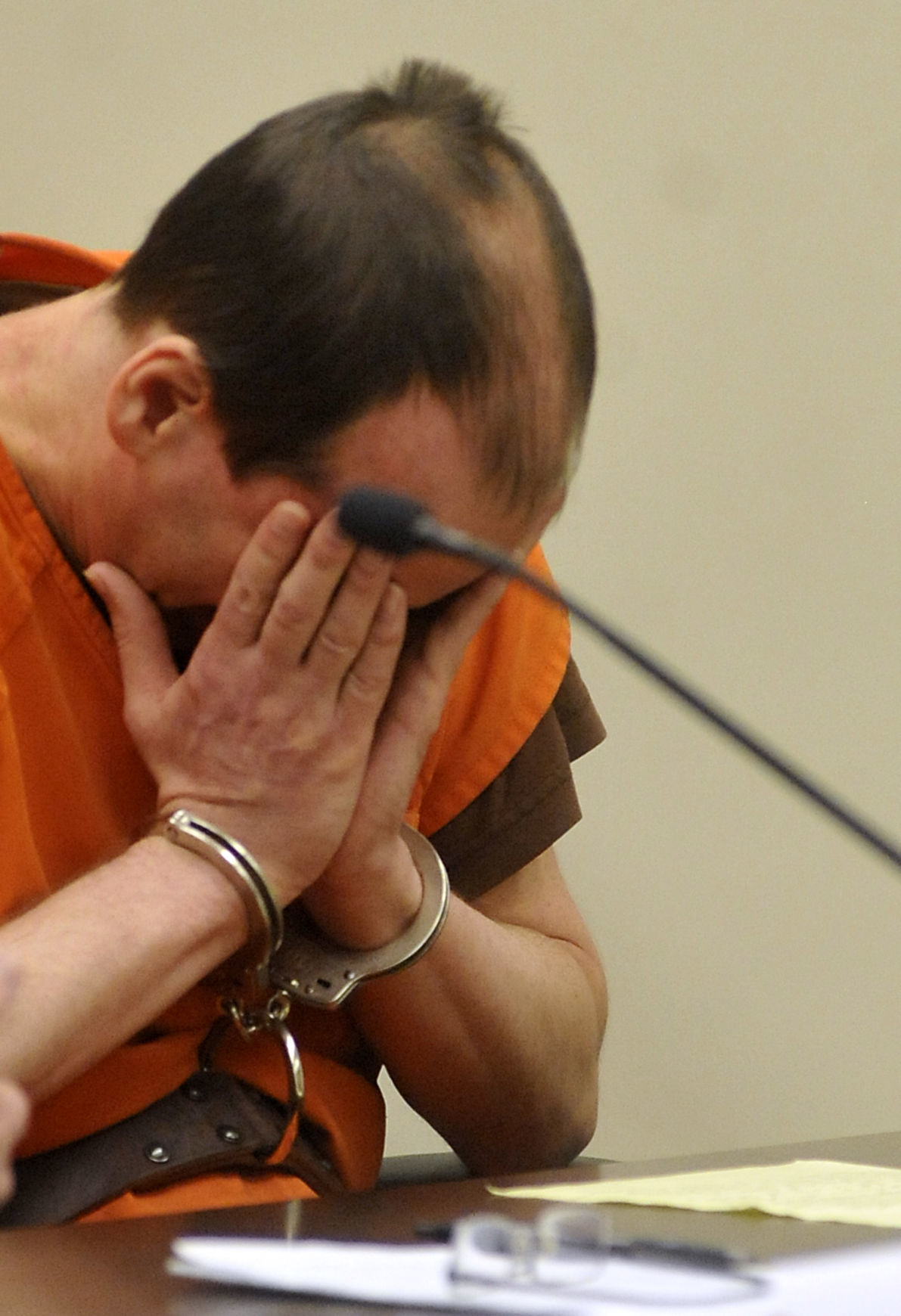 James Kivisto covers his face as his brother speaks on his behalf Friday afternoon during his sentencing hearing before Racine County Circuit Court Judge Mark Nielsen.

RACINE — The Wind Lake gymnastics studio owner and coach charged with possessing child pornography and placing a video-recording device in his facility’s bathroom to record his minor students was sentenced to 17 years, 3 months in prison on Friday.

After his prison sentence, James Kivisto, 50, of the 7900 block of South Loomis Road, will be on extended supervision for another 30 years, a judge ruled.

Kivisto was charged after nearly 200 videos taken by a hidden camera were found in a bathroom at the gymnastics center on March 12. Kivisto worked as the facility’s sole operator and a gymnastics coach since 1987. He also lived in the building.

Ten images of girls ages of 4 to 15 in sexually suggestive situations downloaded from the Internet were also found on Kivisto’s hard drive.

“I am sorry for what I have done and for the pain and suffering I have caused so many great people,” said a sobbing Kivisto. “I will get the help I need and spend the rest of my life proving to you and my family that I am sorry for what I did and I can be trusted again.”

Before sentencing, Racine County Circuit Court Judge Mark Nielsen told Kivisto he doubted that was possible: “Mr. Kivisto, I haven’t decided what to sentence you to at this point, but regardless of what I do, I can promise you, you will never be trusted again.”

The courtroom originally assigned for Friday’s hearing was jam-packed, causing Nielsen to move proceedings to a larger courtroom, as victims and parents sat anxiously waiting to hear the sentence.

One victim spoke of her close relationship with Kivisto prior to his arrest. She said his actions caused her to seek a therapist and shattered her trust in people. “Don’t you ever think I have forgiven you, because I have not, and I will not,” the girl said. “You may not have been hurting us physically, but you hurt us emotionally.”

A parent whose three daughters as well as herself were victimized said she feared the impact on her children’s futures: “My daughters’ childhood innocence and naivety has been taken.”

Another mother said her child was seeing a therapist as a result of the incident. “Mr. Kivisto was a wolf in sheep’s clothing,” she said. “Do not minimize for a second how your criminal actions hurt so many … we continue to pick up the pieces in our young child’s life.”

A former student and teacher said she felt guilt that she did not know what Kivisto was doing. “I wish I would have known sooner,” she said. “I wish I could have stopped you sooner. “

Racine County Assistant District Attorney Dirk Jensen recommended a sentence of 20 years in prison, followed by a period of “significant” extended supervision. “Unlike many cases, where we may have one or two victims, or maybe even as many as four or five, we have an entire community here,” Jensen said.

Jensen mentioned that the recording began in November 2014 at the latest and stopped March 13, the day that he was arrested. In all, there were 36 identifiable victims and 54 unidentified victims.

He cited a 1999 case in which Kivisto was found to be in possession of child pornography after a photo of a young girl between ages 9 and 11 was found in the tray of a computer at a Brown Deer gymnastics center where Kivisto was working. In that case, the Milwaukee County District Attorney’s Office cited Kivisto with disorderly conduct, not child pornography.

“We know there is a continuation of behavior,” Jensen said. “The state believes there is 20 years of this behavior and it only stopped because, by chance, someone who was cleaning found a camera … I can’t think of a worse breach of trust. I can’t think of a more aggravated situation than this.”

“I don’t think it’s fair to say that every good deed he ever did, or every nice thing he ever did for a person, or every little bit of work that he offered one of his students was somehow designed to enable him to get a picture,” Keller said. “I don’t think that is an accurate characterization.”

Keller also said that the sex-offender designation will affect the rest of Kivisto’s life: “Everywhere he goes, basically, for the remainder of his life, he is going to be ostracized by everybody who learns he is a sex offender.”

Two people also spoke on behalf of Kivisto, including his brother.

“I am torn between the love of my brother and what he has done,” Rick Kivisto said. “I do pray, though, all involved can find a way to heal.”

Donald Luedtke, a friend and business associate of Kivisto, said he was angry at his friend, but said that Kivisto is a good person otherwise: “There is another side to Jim that has not been portrayed fairly in the court.”

As Kivisto addressed the court, he thanked his family and friends for sticking by him and apologized for the hurt he caused.

“I will live the rest of my life with the guilt, shame and embarrassment for what I have done,” Kivisto said. “I have hurt everyone I have ever cared for, my family, my friends, and most of my all, the families that I was trusted to protect.”

The remainder of the 31 charges — seven felony counts of possession of child pornography and 24 charges of invasion of privacy with the use of a surveillance device — were dismissed. Eighteen of the latter charges were felonies, because the victims were younger than 18.

Nielsen noted that Kivisto is socially challenged, and said that may have attributed to the situation, calling him “out of touch” with reality.

“Mr. Kivisto strikes me as a very incomplete character. This is guy who is actually able to convince himself that his behavior in concealing his camera and making his tapes was a matter of ‘what people don’t know won’t hurt them,’ ” Nielsen said. “What they didn’t know damaged them severely.”

WIND LAKE — A gymnastics center owner and coach was arrested Tuesday for reportedly recording juveniles as they changed at his Wind Lake facility.

James Kivisto, right, cries as he apologizes to his victims Friday afternoon during his sentencing hearing before Racine County Circuit Court Judge Mark Nielsen. Kivisto was sentenced to 17 years, 3 months in state prison for video-recording girls and women in the restroom of his Wind Lake gymnastics studio. Shown with Kivisto is his attorney, Robert William Keller.

James Kivisto covers his face as his brother speaks on his behalf Friday afternoon during his sentencing hearing before Racine County Circuit Court Judge Mark Nielsen. 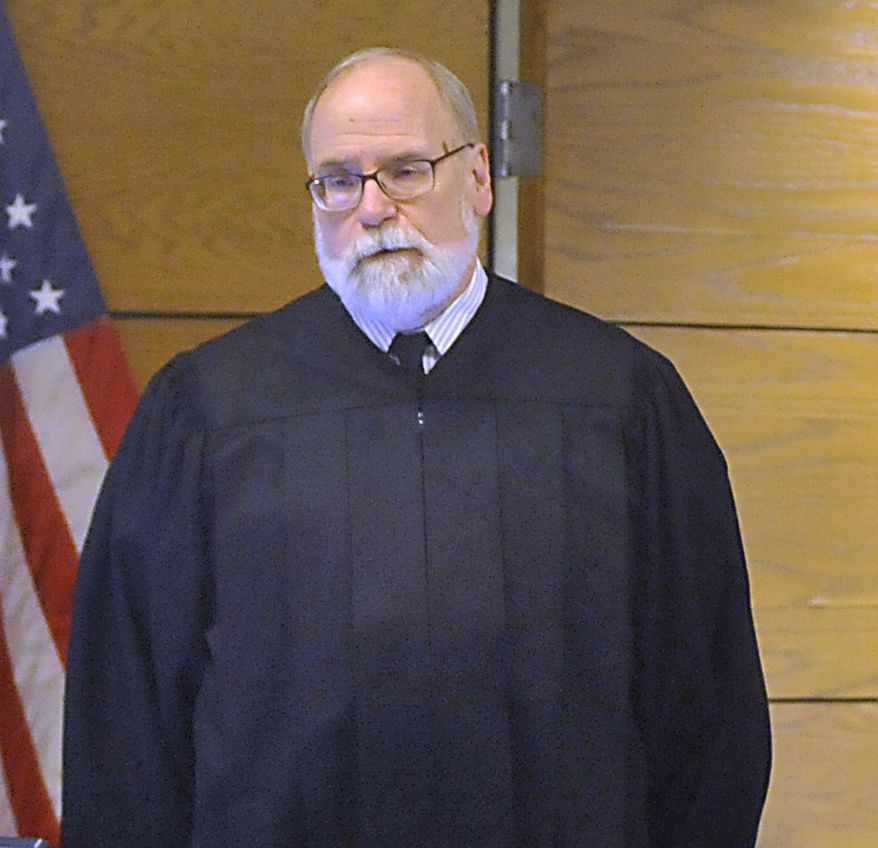 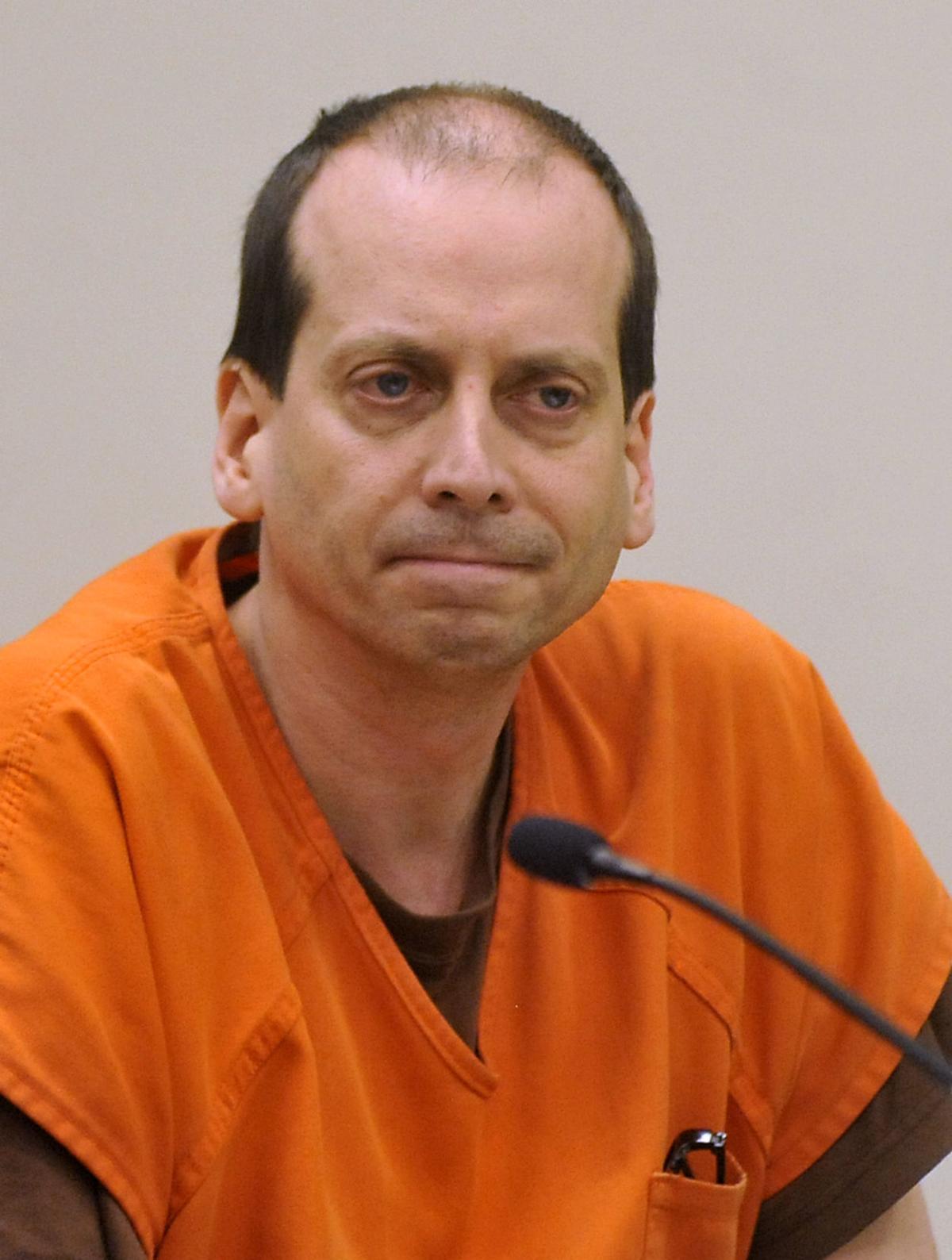