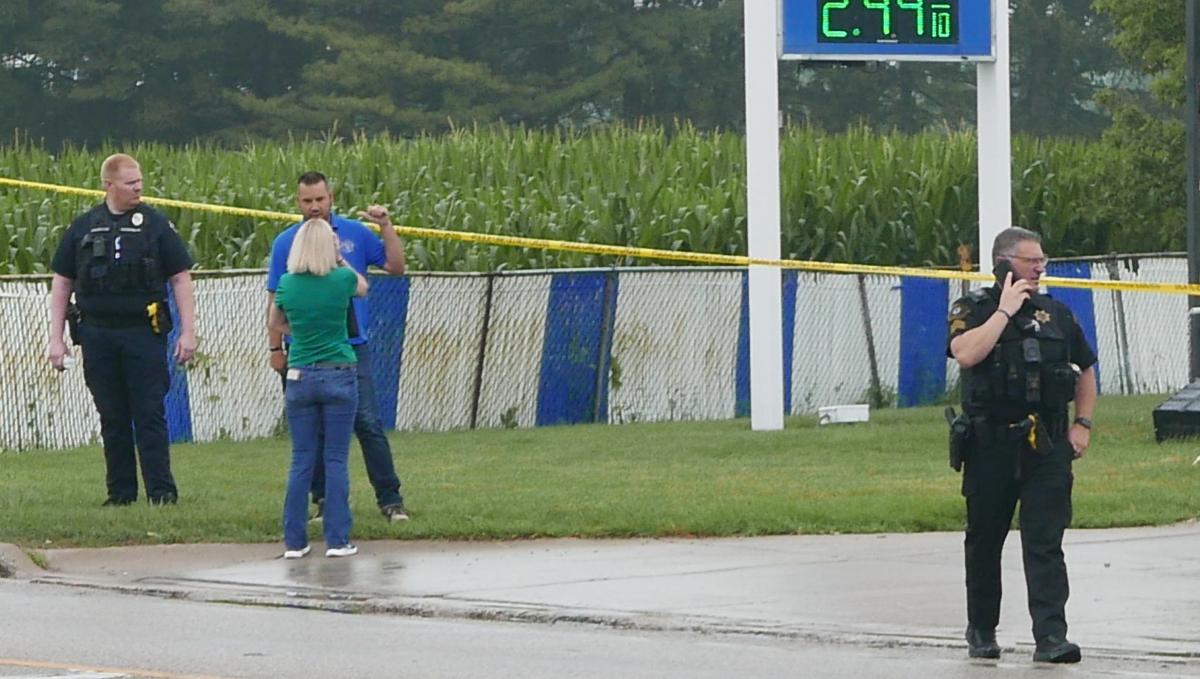 Rural Racine County was the scene of a shooting investigation on Tuesday. 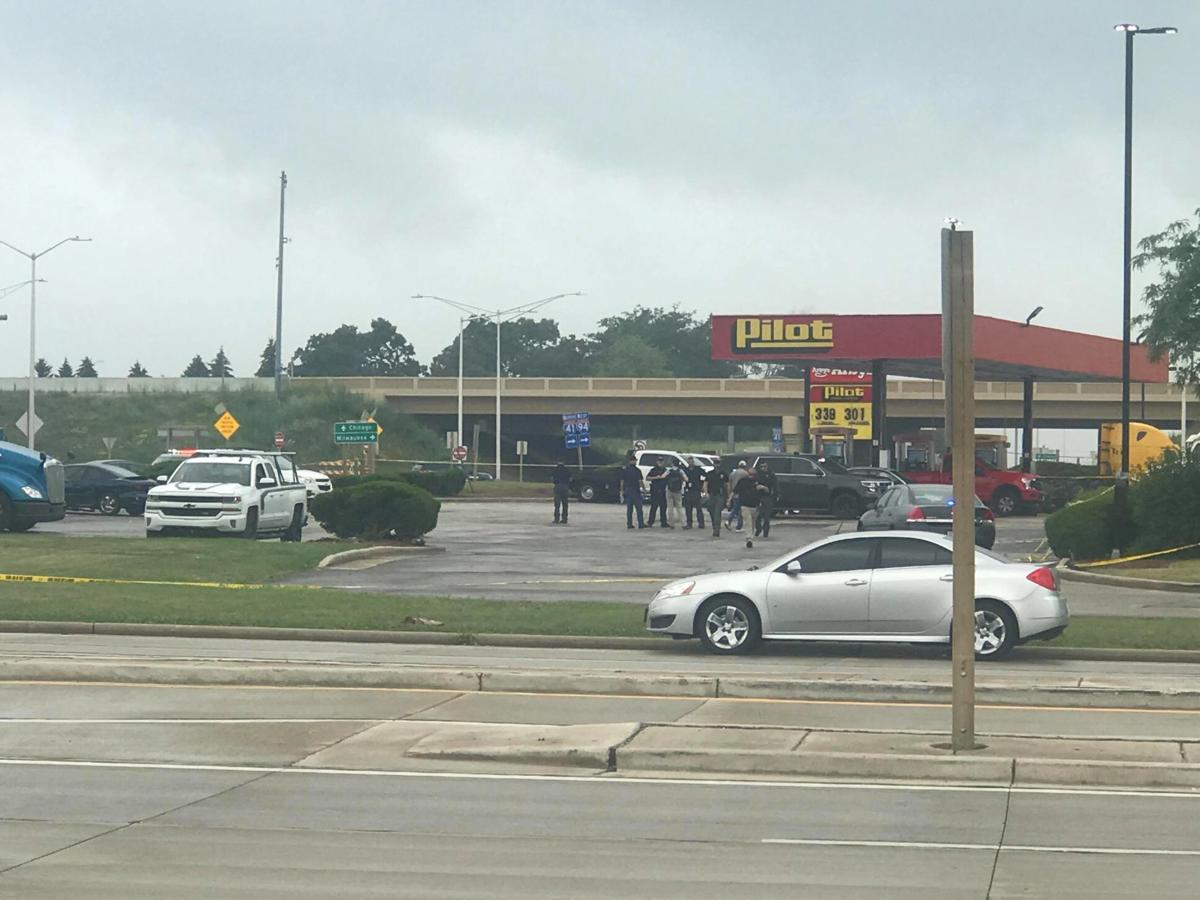 CALEDONIA — After a 32-year-old man shot and killed a 22-year-old man who was filling up at the Pilot gas station adjacent to Interstate 94 in Caledonia at about 7:30 a.m. Tuesday, the 32-year-old allegedly shot at another vehicle, then sped away, Racine County Sheriff Christopher Schmaling said in a briefing early Tuesday afternoon.

As the Caledonia Police Department was responding to the incident at the Pilot, the suspect pulled into the Mobil gas station east of the Pilot station on Highway K in the Franksville area of Caledonia, where an undercover Racine County Sheriff’s Office investigator was coincidentally filling up his unmarked vehicle, Schmaling said.

There was an exchange of gunfire. The suspect was killed. The investigator, with more than 20 years of experience, was wounded and taken to Ascension All Saints Hospital; Schmaling said he is “conscious and alert.”

Schmaling said he has seen video of the shooting at the Pilot station. Of the 22-year-old, Schmaling said: “He was viciously executed.”

The sheriff indicated there was no known motive for the shootings.

Schmaling asked for prayers for the loss of life and for the officer recovering from his injuries. He took no questions from the media.

The state Department of Justice’s Division of Criminal Investigation is investigating.

On Tuesday morning, Racine County law enforcement officers were investigating a pair of possible shootings reported at two Caledonia gas stations along Northwestern Avenue: the Pilot Travel Center next to Interstate 94 and the Mobil gas station at 10616 Northwestern in the Franksville area.

In a news release, the Caledonia Police Department referred to the situations as “an active investigation ... there is no threat to the community.” Travel is restricted in the area.

A trucker — who declined to give her name, citing fears for her safety — said she had just pulled into the Pilot to fuel up when a man ran out of the store. She said she then saw a truck ahead of her back up and make a U-turn to leave.

“Then, everybody starts running out of the Pilot, it’s truckers just running, sea of people, this one guy is yelling, ‘Run! Run!’ and I’m like, ‘Oh my God,’” the woman said. She said she asked one of the people what was going on.

“He said that somebody’s in there shooting,” the woman said. She said she did not witness any shooting or see anyone hurt.

In a statement, Pilot Co. spokeswoman Stephanie Myers said it’s “an open investigation, we are cooperating fully with local authorities.” The statement went on to say the “safety and well-being” of the company’s employees and customers “is always our main concern.”

Windows in a black vehicle in the parking lot of the Mobil gas station appeared to have been smashed or shot out.

For hours after the shootings, law enforcement was busy at the two gas stations.

Within two hours of the killing at Pilot Travel Center, the scene was quiet.

About a dozen police cars were scattered throughout the perimeter, in the gas station’s parking lot and near the A&W Restaurant parking lot nearby.

Caution tape surrounded the gas station and orange cones blocked any entry and exit points. Witnesses appeared to still be at the Pilot as police officers conducted an investigation.

Two TV news reporters said armored vehicles including SWAT vehicles had been seen, but had departed before 9:30 a.m.

Evidence markers were scattered throughout the Mobil parking lot in Franksville, an apparent testament to how many shots had been fired between the suspect and investigator. A pool of blood also was visible in the parking lot.

Fire vehicles were called to the Mobil gas station on Tuesday afternoon to clean the area with water.

“Folks, I've never seen anything like this whole life,” Racine County Sheriff Christopher Schmaling told the Racine County Board Tuesday evening, hours after the Sheriff's Office reported that a 21-year veteran of the RSCO shot and killed a man who allegedly had just killed a 22-year-old "for no reason" at Pilot Travel Center near Interstate 94 in Caledonia.

Rural Racine County was the scene of a shooting investigation on Tuesday. 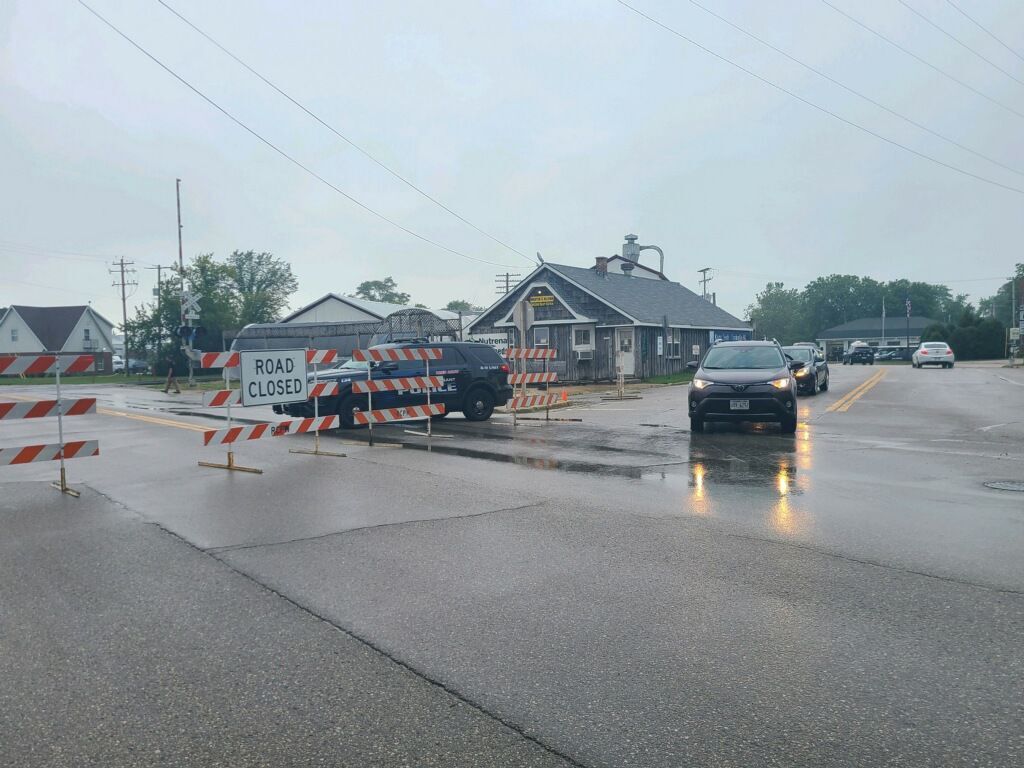 Local law enforcement personnel are restricting traffic along Highway K in the Franksville area of Caledonia this morning.