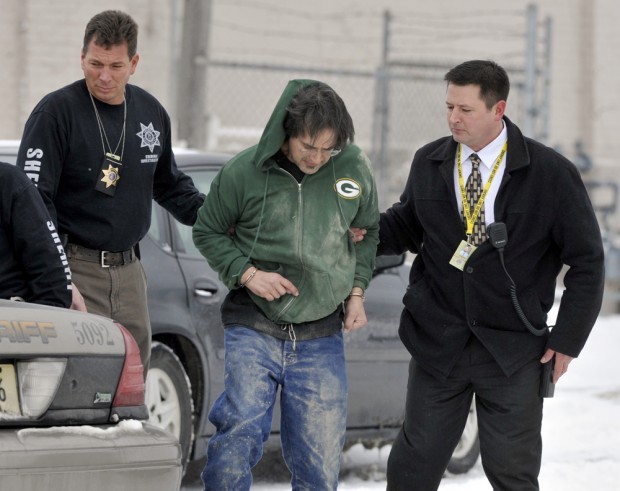 Sheriff Christopher Schmaling, right, and a deputy lead Keith Abbott, 47, of Sturtevant to a sheriff’s squad car after arresting him Tuesday afternoon, February 1, 2011, at Abbott's business, Creative Woods at 2700 Sheridan Road. Abbott was arrested in connection with the death of Kristen Miller, whose snow-covered body was found in a rural ditch in Rock County on Monday, January 31, 2011. Kristin Miller disappeared January 1, 2011. / Gregory Shaver gshaver@journaltimes.com 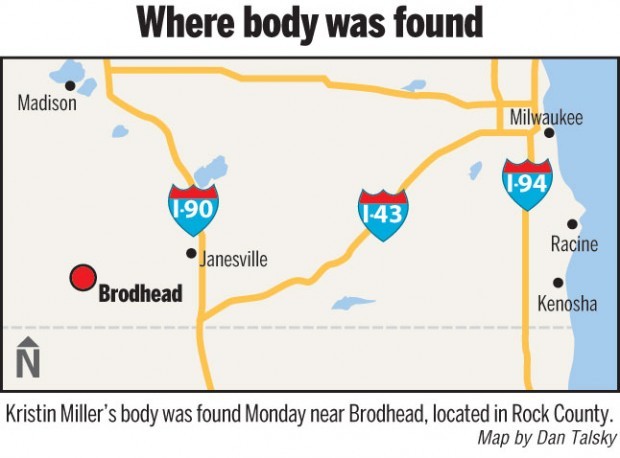 Deputies arrested a Sturtevant man Tuesday in connection with the body of a Racine woman found in Rock County.

For nearly a month police have been searching for the 33-year-old Racine woman who disappeared Jan. 1 and hasn't been seen or heard from since.

Monday, Kristin Miller's snow-covered body was found in a rural ditch in Rock County, according to Racine County Sheriff's Deputies.

Tuesday, deputies arrested Keith Abbott, 47, of the 8600 block of Camelot Trace in Sturtevant in connection with her death.

Around 2 p.m., deputies surrounded Abbott's business, Creative Woods at 2700 Sheridan Road. With guns drawn, some waited outside while others went in to arrest the homicide suspect. A short time later, Abbott was brought out and put into a waiting sheriff's squad to be taken to the Law Enforcement Center, 717 Wisconsin Avenue.

Sheriff Christopher Schmaling said the homicide investigation is still active and he could release few details about it, including how Abbott was developed as a suspect.

"I'm hoping to interview him today," Schmaling said on Tuesday.

According to online court records, Miller has a 2-year-old daughter with Abbott's son. Records show that during court hearings over child support and custody, on Nov. 23 Abbott was selected to be the go-between to transfer custody of the little girl from one parent to the other.

On Jan. 1, Miller was reported missing.

Initially, the Sturtevant Police Department was investigating her disappearance. Last week the case was handed over to the sheriff's department and the state Department of Criminal Investigation.

Miller's body was found around noon Monday in a ditch just southeast of Brodhead, Wis. by a man walking on his property, according to the Rock County Sheriff's Department.

Cheri Miller, Kristin's sister, said she received a call from authorities in the middle of the night. The family, which lives in Winthrop Harbor, Ill., has been kept informed about the investigation all along, Cheri Miller said. They knew the chances of finding Kristin alive were very slim.

"We've always known," Cheri said. "It was just a matter of finding her."

But that doesn't make the finality of her sister's death any easier.

"We're devastated by what happened to Kris," Cheri Miller said.

They are angry with Abbott, who they've never met, for making them wait, and hope, for weeks.

"For him to sit on this for three weeks..." Cheri Miller said. "His granddaughter has no mother. It's someone's family.

"We want justice to be served. There's two kids that now have no mother."

Kristin Miller also has an 11-year-old son, according to her family. Both children have been living with their fathers.

Schmaling said he planned to speak to Miller's family Tuesday and wanted to meet with them in person at a later date.

"Our thoughts and prayers go out to the family," he said. "They can count on us to do a thorough job."

The Janesville Gazette reported that the Tuesday autopsy revealed Miller's cause of death to be a homicide, although specific fatal injuries remain under investigation, authorities said.

Schmaling said the sheriff's department will be recommending homicide charges to the Racine County District Attorney's Office and anticipates formal charges will be filed against Abbott shortly.

Hearing delayed for man accused of leaving body in ravine

RACINE - The case against a Sturtevant man accused of stabbing a woman to death was put on hold until he gets an attorney.

RACINE - Attorneys for a Sturtevant man accused of stabbing a woman to death have questioned whether he is competent to stand trial.

Man to be tried in Rock County for stabbing homicide

STURTEVANT - It has been nearly two weeks since anyone has seen 33-year-old Kristin Miller, and police are still searching for clues to her wh…

STURTEVANT - Police are searching for a 33-year-old Racine woman who has been missing for the past three days.

RACINE COUNTY - The investigation into a Racine woman who has been missing since Jan. 1 has been turned over to the Racine County Sheriff's De…

Sheriff Christopher Schmaling, right, and a deputy lead Keith Abbott, 47, of Sturtevant to a sheriff’s squad car after arresting him Tuesday afternoon, February 1, 2011, at Abbott's business, Creative Woods at 2700 Sheridan Road. Abbott was arrested in connection with the death of Kristen Miller, whose snow-covered body was found in a rural ditch in Rock County on Monday, January 31, 2011. Kristin Miller disappeared January 1, 2011. / Gregory Shaver gshaver@journaltimes.com