An activist who took part in Black Lives Matter protests following the Jacob Blake shooting in Kenosha was charged Friday with a felony for allegedly kicking a door at the Kenosha Public Safety Building and allegedly making a comment about breaking a police officer’s fingers.

Clyde McLemore, 62, of Zion, Ill., founder of the Black Lives Matter chapter in Lake County, Illinois, was charged Friday in Kenosha County Circuit Court with attempted battery to a law enforcement officer — a felony — and disorderly conduct, a misdemeanor. A warrant was issued for McLemore’s arrest.

McLemore was active in many of the Black Lives Matter protests in the city following the shooting of Jacob Blake by a Kenosha Police officer on Aug. 23. He was also involved in protests in Racine following the Jan. 17, 2018, shooting of Donte Shannon by Racine Police. Prosecutors declined to file charges against police in either incident.

Letetra Wideman, Jacob Blake’s sister and chair of the Black Lives Matter chapter in Lake County that McLemore founded, said she was “disgusted” by the charge, calling it absurd. She said McLemore has worked for years on social justice issues.

“I would like to understand how the police can put a warrant out for the arrest of Clyde for kicking a door, but there was no charge for the police officer who shot my brother in the back seven times with his children in the car,” Wideman said. “If they don’t want to tell us in plain words that their actions are motivated by racism and systemic racism, then their actions have proven it without saying a word. They don’t have to say it verbally, we are constantly being shown that our lives do not matter.”

According to the criminal complaint, the felony charge is based on a statement McLemore made on his Facebook page in which he allegedly said he “was mad enough to try to break the officer’s fingers,” the statement posted along with a photo and video of him allegedly kicking the door of the Public Safety Building during a protest outside. The officer was not injured.

Reached by phone Friday afternoon, McLemore said he had just learned of the charges. “Kenosha County is refusing to charge the officer that shot Jacob Blake, but now they want to charge Clyde McLemore,” he said.

When Mayor John Antaramian arrived at the Public Safety Building for the press conference, an angry group of about 50 people were outside. They attempted to force their way inside, where local and state officials and members of the media had already gathered in the lobby.

Protesters damaged the door in their efforts to get inside.

Police in tactical gear were called in to break up the crowd and close the doors, while inside police moved local officials and the media into the interior of the building. Police used pepper spray to try to move the crowd away from the doors, according to Kenosha News journalists who were at the scene.

According to the criminal complaint, people in the crowd outside the Safety Building were “yelling, acting in a threatening manner, and throwing objects at officers.” An officer grabbed the door to pull it shut while, according to the complaint, McLemore can be seen on video running toward the door “which is followed by a bang, and then the defendant is retreating, which is consistent with him kicking the door. The defendant then made a comment that he was trying to break the officer’s hands.”

The complaint states that the officer “heard and felt a loud-hard slam against the door” as he pulled it closed.

The felony charge for making a threat against a police officer carries the possibility of up to three years in prison if convicted.

On Feb. 14, police and rescue responded to the 1800 block of LaSalle Street, Racine, to a 911 call for a pulseless, non-breathing infant.

Details are still coming out about what exactly occurred and what preceded the chase. Charges have not yet been filed.

Jose Trinidad, 46, who repeatedly sexually assaulted a child from the time she was 6 years old until she was 9 years old, was handed a lengthy prison sentence on Tuesday in Racine County Circuit Court Judge Wynne Laufenberg.

RACINE — A Racine man allegedly tried to buy marijuana with fake money and fired a gun multiple times at a car.

Racine man, who allegedly had nearly a quarter-pound of cocaine in his car and home, arrested

A Racine man who allegedly had nearly a quarter pound of cocaine in his car and home has been accused of being a drug dealer and was arrested.

The man allegedly obtained the silence of the children he abused through a ruse in which he pretended to be a Mafia boss.

Racine man allegedly slammed teen girl to the ground, had a crack pipe on him

RACINE — A Racine man, accused of slamming a teenager to the ground, was allegedly found to have had a crack pipe on him when he was arrested.

Man charged with 4th OWI after allegedly getting into a car accident at Taylor Ave. & 19th St.

Police said that, a conversation with the suspect, he changed his story about where he was coming from multiple times and said he wasn't driving after saying he was the driver earlier.

RACINE — A Racine woman allegedly kicked an officer in the groin, and tried kicking and punching nurses in the ER.

Two charged with allegedly having 471.3 grams of marijuana

MOUNT PLEASANT — Two have been charged with allegedly having more than 470 grams, slightly more than a pound, of marijuana. 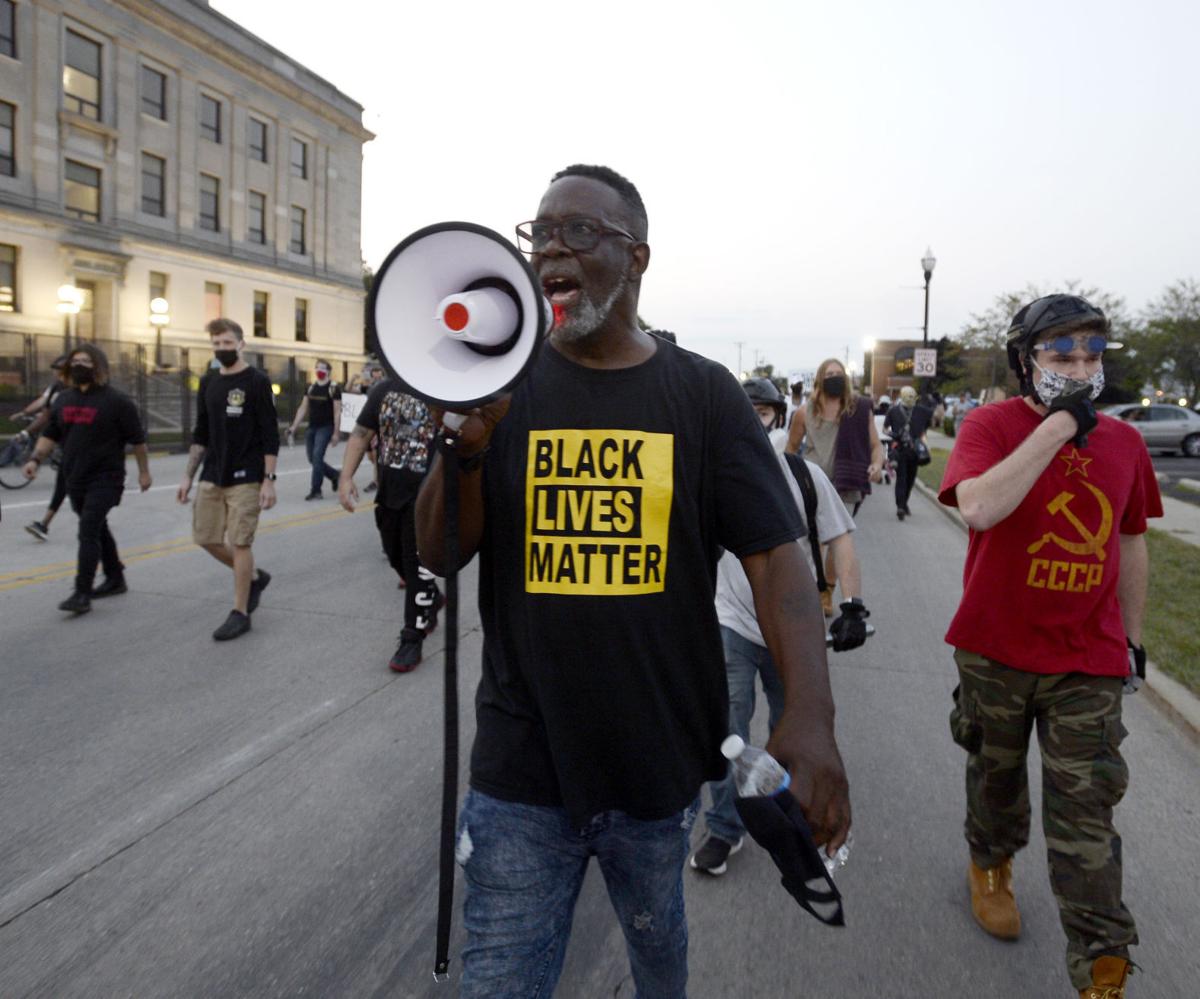 Clyde McLemore, founder of Black Lives Matter Lake County Chapter, leads a group of demonstrators in a march to Civic Center Park on Aug. 25, 2020. McLemore was charged Friday with a felony for allegedly kicking a door at the Kenosha Public Safety Building and allegedly threatening to injure a police officer in a Facebook post. 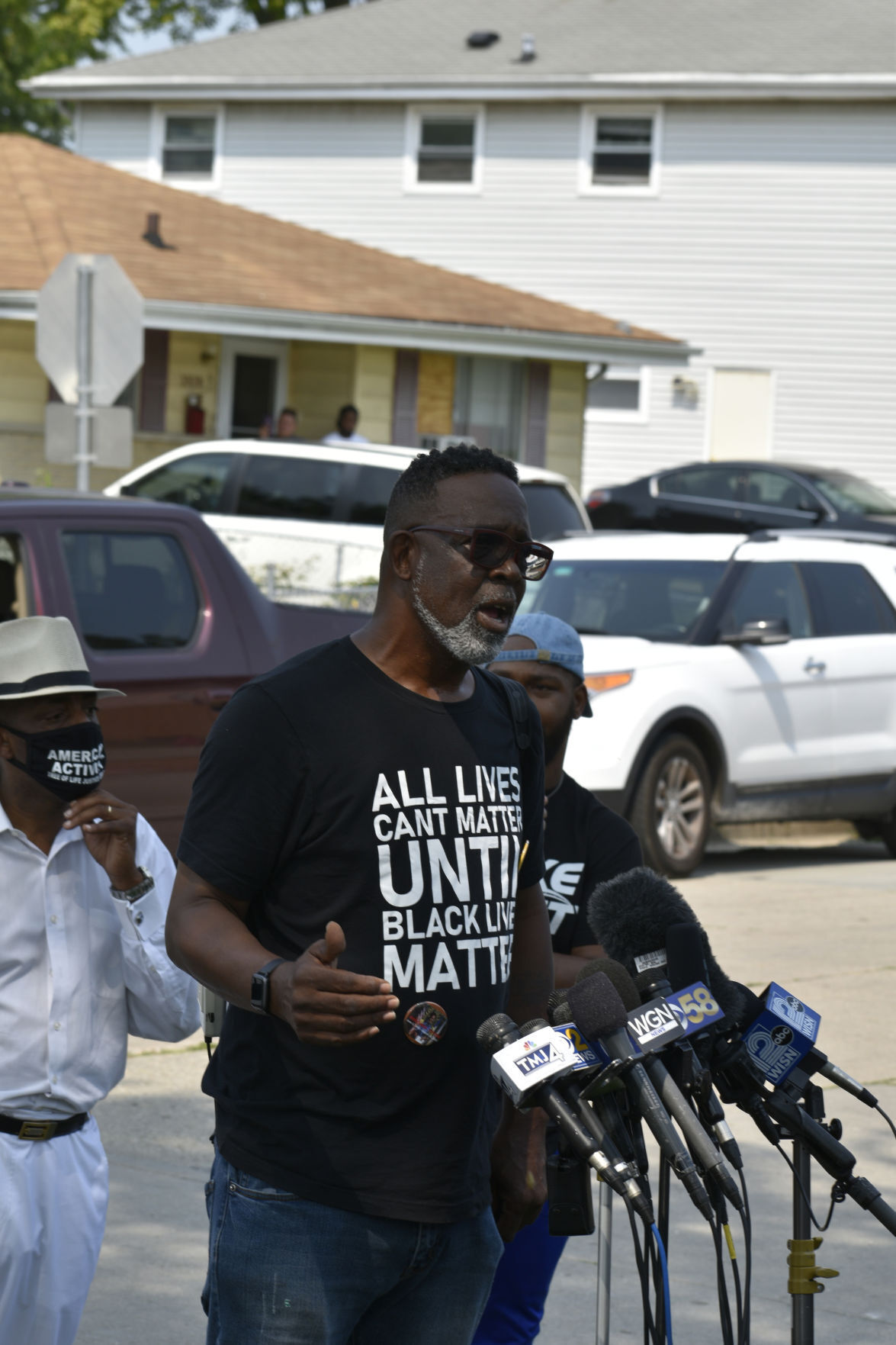