FAIRPLAY, Colo. — “Forty years of wondering” are finally over for the family of Bobbie Jo Oberholtzer.

The man who murdered Oberholtzer is going to prison. Probably for the rest of his life.

A jury on Thursday found Alan Lee Phillips, now 71, guilty for murdering two women in 1982, 21-year-old Annettee Schnee and Oberholtzer, who was a 29-year-old mother of one when she was shot twice in the back as she was apparently escaping after being kidnapped while hitchhiking near her home in Alma, Colorado. Oberholtzer was born in Racine and graduated from Park High School in 1971 before she relocated to a community near the mountain town of Breckenridge, Colorado.

“It’s been a long 40 years of wondering. I felt so happy for all the officials and sheriffs and detectives and everybody in Colorado who could put this to a close,” Oberholtzer’s sister, Laurie Merlo, of Sturtevant, said in a phone call Monday afternoon. “I feel cheated that I had to live most of my adult life without my sister. Her daughter feels the same way, cheated.”

Law enforcement are describing the late Oberholtzer as a hero. Had Oberholtzer not been brave enough to fight back against her kidnapper like she did, prosecutors said, the case would likely have remained cold permanently.

“Bobbi Jo was a fighter and is a hero,” Linda Stanley, district attorney for the 11th Judicial District, said in a statement. “She fought back and because of that we were able to get DNA evidence to convict Annette and Bobbi Jo’s killer after all this time.”

The jury deliberated for about five hours before finding Phillips guilty on eight counts, including two counts of first-degree murder, kidnapping and robbery.

Merlo was unable to travel to Colorado for the trial and it was not broadcast on TV or online. Upon hearing the verdict, Merlo said she her feelings could be described as being “between relief and satisfaction, of finally knowing that he had been convicted on all counts. It was a very emotional thing to hear.”

Schnee and Oberholtzer did not know each other, and it does not appear that either knew Phillips. But both women disappeared the same day: Jan. 6, 1982.

Phillips had lived free in Colorado for 40 years after the murders without being so much as a suspect.

The lack of arrests led to the high-profile killings becoming known as the “Rocky Mountain Cold Case.”

Phillips faces life in prison when he is sentenced at a hearing set for Nov. 7 in Fairplay, Park County, Colorado.

A Denver Police detective in retirement continued independently investigating the case, running into endless dead ends and resigning himself to believe that he would likely die before the murders were solved. The detective, Charlie McCormick, was able to get in touch with United Data Connect, a company that performs forensic genetic genealogy analysis. That company used DNA found at the crime scenes to identify Phillips, who was arrested Feb. 24, 2021.

Like Oberholtzer, Schnee was believed to have been hitchhiking when Phillips picked them up, kidnapped them, zip-tied their wrists together, and later shot and killed them. He dumped the bodies in different places.

Investigators said Phillips was rescued the night that the women disappeared from the top of nearby Guanella Pass when his truck got stuck during a snowstorm, Denver-based KUSA-TV reported.

Friends and family discovered Oberholtzer’s body in a snow drift on the summit of 11,542-foot Hoosier Pass, near Breckenridge, one day after she disappeared. Schnee’s body was discovered six months later by a boy fishing in a creek in rural Park County.

“This case being so old, this (verdict) shows there’s no case that can’t be solved,” Deputy District Attorney Mark Hurlbert, who helped prosecute the case, said.

After Phillips was arrested, Oberholtzer’s widower, Jeff Oberholtzer, issued a statement that concluded with the following: “I cannot thank enough all who never gave up the search for the truth. They are, without doubt, extremely dedicated and extraordinary individuals. Phillips is finally in the hands of the judicial system. May justice be served.”

Reporting from the Associated Press is included in this story.

The truth about mosquitoes — and what you may be doing wrong

Is it really a bad year for mosquitoes?

Is my suffering worse than yours?

Should I eat garlic?

What about mosquito traps?

A Kenosha woman who was reportedly practicing driving because she didn't have a license allegedly caused a crash that injured another woman then fled the scene.

Illinois man accused of fraudulently purchasing over $6,000 worth of goods from ABC Supply

An Illinois man has been accused of fraudulently buying over $6,000 worth of goods from ABC Supply in Burlington.

CALEDONIA — A Racine man has been charged with third OWI after having a blood-alcohol content over four times the legal limit.

Milwaukee woman accused of stealing $1,300 worth of items from Mount Pleasant Kohl's

A 58-year-old Milwaukee woman has been accused of stealing more than $1,300 worth of items from Kohl's. 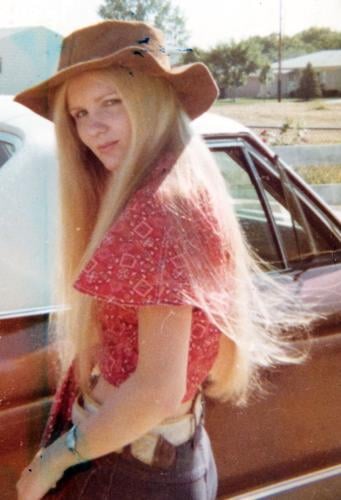 Barbara "Bobbie" Jo Oberholtzer (nee: Burns), a Racine native murdered in 1982 near her home in the Rocky Mountains in Colorado, is shown in this photo shared by her sister. 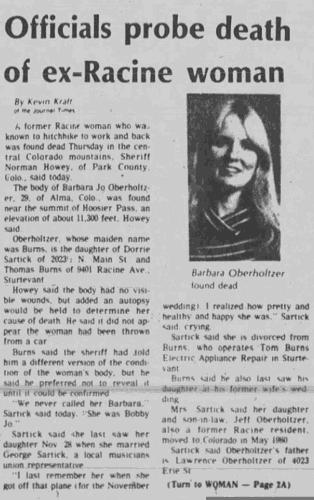 A 1982 news clipping from The Journal Times reporting on Bobbie Joe Oberholtzer's death in Colorado. 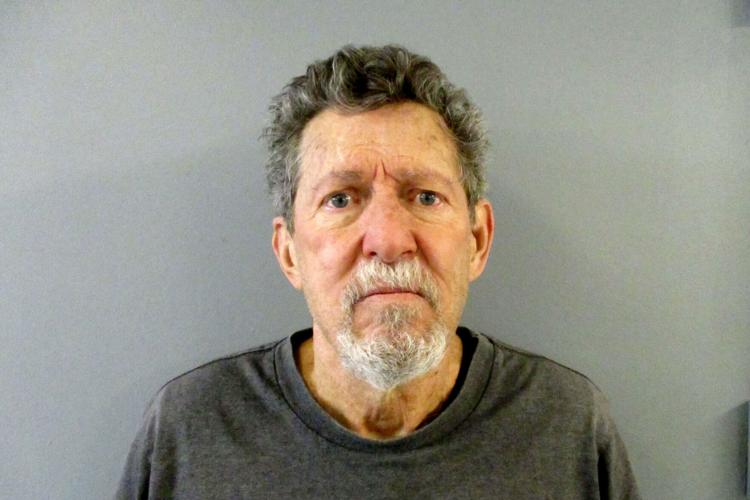