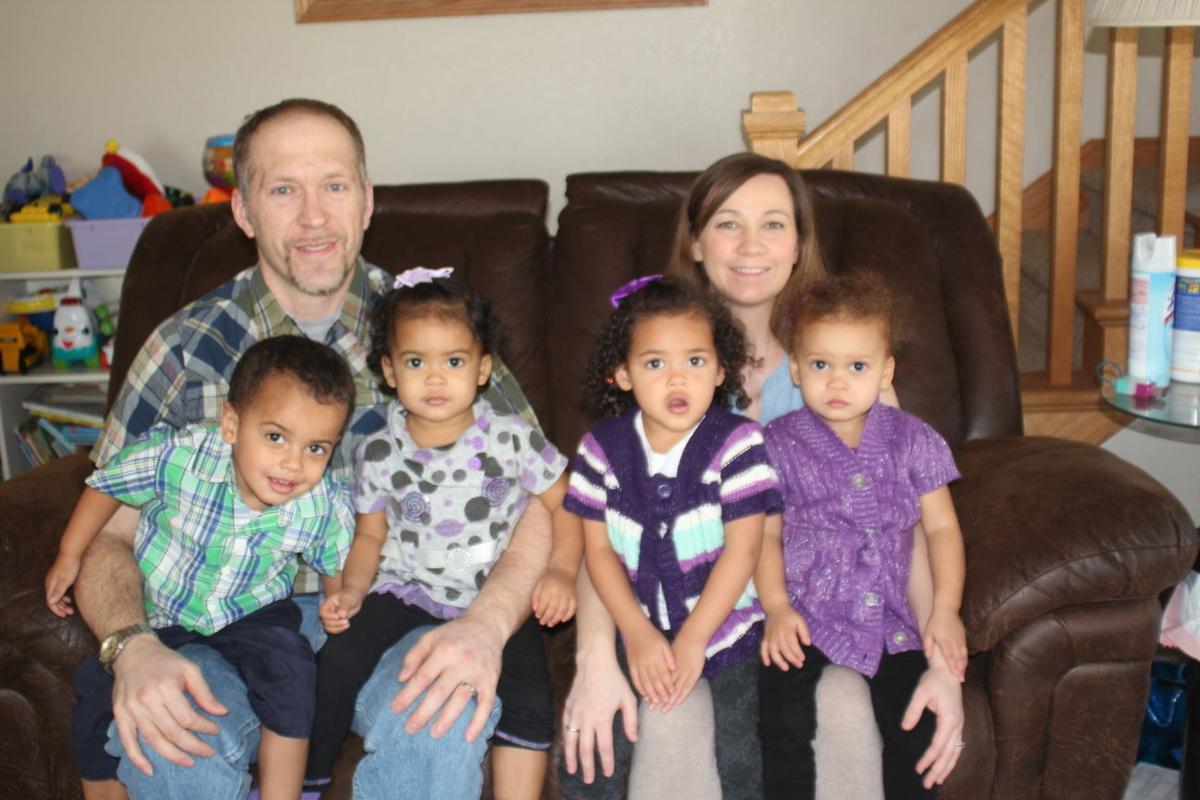 of Yorkville pose with their soon-to-be adopted twins on Thursday. Seated on their parents’ laps, from left to right, are J.J., 3, Adalynn, 2, Cece, 3, and Kenna, 2. The couple’s youngest children, 7-week-old twin girls, Karraline and Clarissa, are in critical, but stable condition at Children’s Hospital of Wisconsin in Wauwatosa. 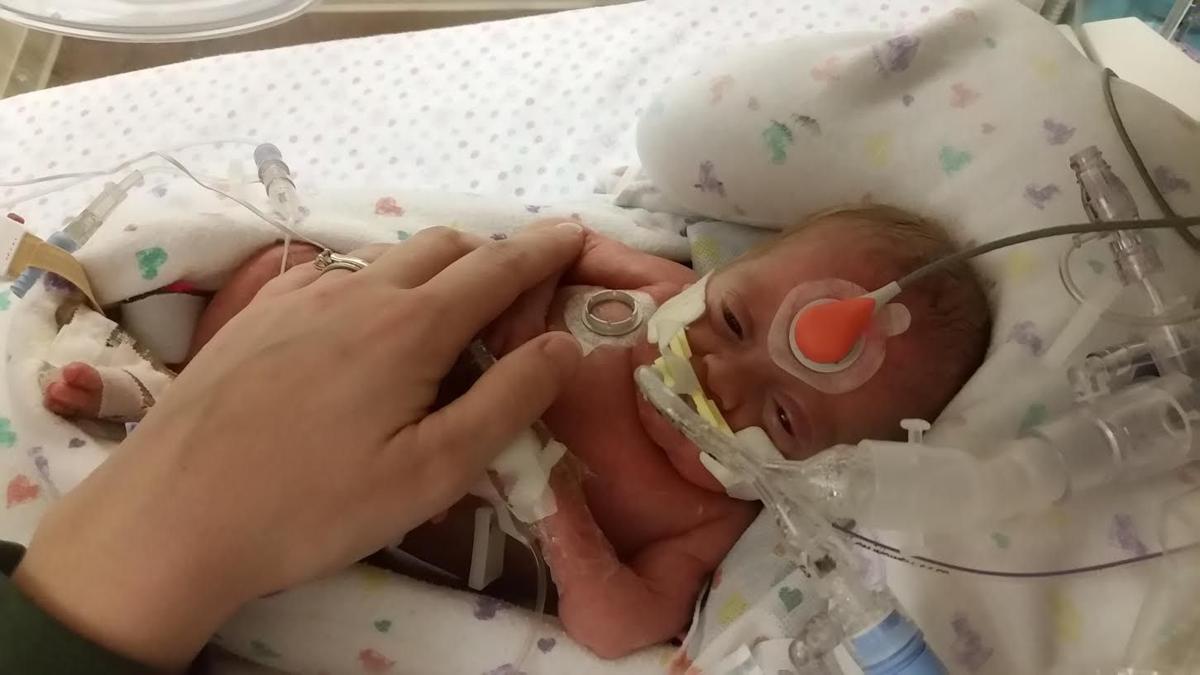 gets a loving caress in this recent photo taken at the Neonatal Intensive Care Unit at the Children’s Hospital of Wisconsin in Wauwatosa. She and her twin sister, Karraline, are about 7 weeks old and will likely be in the NICU for a few more months. 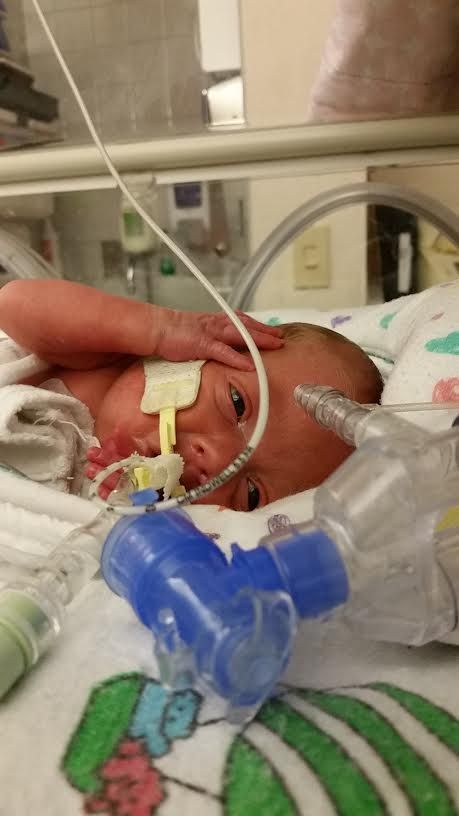 Karraline Kosinski touches her head in this recent photo taken at the Neonatal Intensive Care Unit at Children's Hospital of Wisconsin in Wauwatosa. She and her twin sister, Clarissa, are about 7 weeks old and will likely be in the NICU for a few more months.

YORKVILLE — Carrie and Craig Kosinski were still just newlyweds planning for a family of their own when Carrie got a call from an old friend from Michigan.

Pregnant with twins and unsure if she could take care of the babies, the friend asked Carrie if she and her husband would adopt them.

Deciding to give it the old college try, the couple agreed to take custody of the children on a trial basis, and on Feb. 28, 2014, they picked up Adalynn and Kenna from a hospital in Ohio.

Little did they know that two years later they would be the proud parents of, not one, but three sets of twins — four adopted toddlers — and two premature babies of their very own.

The story is a complicated one, and emotional, but today the couple say they truly believe fate stepped in to bless them with all six members of their both rambunctious and still struggling brood.

“God has a sense of humor,” quips Carrie of the family’s tale.

Taking a break from work and child-rearing last week, the couple took a few minutes to explain how one set of twins became three.

The young family had been taking care of Adalynn and Kenna for about a year and had decided to adopt them, when the children’s biological mother reached out again looking for help.

She had hit a rough spot, and was wondering if Carrie and Craig could take care of her two older children, a twin boy and girl who were then 2 years old. The couple agreed. It wasn’t long before the children’s birth mother implored them to keep all four kids.

The decision to adopt them all wasn’t easy, admits Carrie, but one they made soon after welcoming young Cece and J.J. — whom they had previously cared for while their birth mother was pregnant — back into their home.

“It was a difficult decision. We were trying to get pregnant ourselves. But they were siblings so that was definitely was part of our consideration — we wanted to keep the siblings together,” Carrie said.

But even with a house filled with the noises, love and trappings of four toddlers, Carrie and Craig were still pining for children of their own.

It was about a year later, when Carrie found out that another set of twins would be showing up in the Kosinski household — only this time they were expected.

One day, sitting on the couch folding clothes, the five-months-pregnant Carrie felt what she thought might be contractions.

She called her doctor.

By the time she went in for her appointment she was fully dilated. Six weeks of hospital bed rest later, she was underwent emergency T-section surgery (a type of cesarean), giving birth to Karraline and Clarissa on Feb. 28 of this year.

Just 25 weeks old, the infants weighed in at only a 1 pound, 6 ounces each, and were sent directly to the neonatal intensive care unit.

In the weeks that have passed, the tiny babies have undergone surgeries and suffered through viral infections. They both have scar tissue on their lungs and are on full-blown oxygen, but they are making progress, Carrie said.

Since their birth they have each gained about 1.5 pounds and remain in stable, but critical, condition.

Carrie tries to see them once a day, driving from the horse farm outside Union Grove where the family lives to Children’s Hospital of Wisconsin in Wauwatosa, where the girls will likely be staying for next several months. Craig, who does accounting for a Kenosha business, gets out to see the girls about three times a week.

Their brothers and sisters should be able to visit soon.

Asked how they get through every day, taking care of four toddlers and worrying about two struggling infants, Carrie and Craig both say “prayer.”

In addition to getting help from biological family members, and their church family at Living Light Christian Church in Kenosha, they say they have friends around the world praying for them.

“We think it is definitely meant to be that we would have all of them,” Carrie said. “It’s just God’s way of saying here I’m giving you these children as a blessing, and I am going to make it interesting and fun for you by having them all born on the same day.”

In the meantime they will just try to just take things day by day, even if fate has made them the parents of three sets of twins, all 3 years of age and younger.

“It just kind of happened all at once. You can’t fuss with the stuff too much,” said Craig last week watching Cece, J.J., Adalynn and Kenna bound across the living room.

“You’re just trying to put out the big fires and hope that the little fires aren’t too serious.”

Although the Kosinski Family is managing the cost of four toddlers, they also aren’t in a position to say no to those looking to help, they said. Right now the family’s biggest expense — one they haven’t been able to save for — is the $17,000 to $20,000 it will cost to legally adopt siblings Cece, J.J., Adalynn, and Kenna. Right now the Kosinskis are legal guardians of the children.

Carrie Kosinski said those looking to donate to the family can do so by wiring them money through Paypal.com, using email address cshortsle@gmail.com.

of Yorkville pose with their soon-to-be adopted twins on Thursday. Seated on their parents’ laps, from left to right, are J.J., 3, Adalynn, 2, Cece, 3, and Kenna, 2. The couple’s youngest children, 7-week-old twin girls, Karraline and Clarissa, are in critical, but stable condition at Children’s Hospital of Wisconsin in Wauwatosa.

gets a loving caress in this recent photo taken at the Neonatal Intensive Care Unit at the Children’s Hospital of Wisconsin in Wauwatosa. She and her twin sister, Karraline, are about 7 weeks old and will likely be in the NICU for a few more months.

Karraline Kosinski touches her head in this recent photo taken at the Neonatal Intensive Care Unit at Children's Hospital of Wisconsin in Wauwatosa. She and her twin sister, Clarissa, are about 7 weeks old and will likely be in the NICU for a few more months.