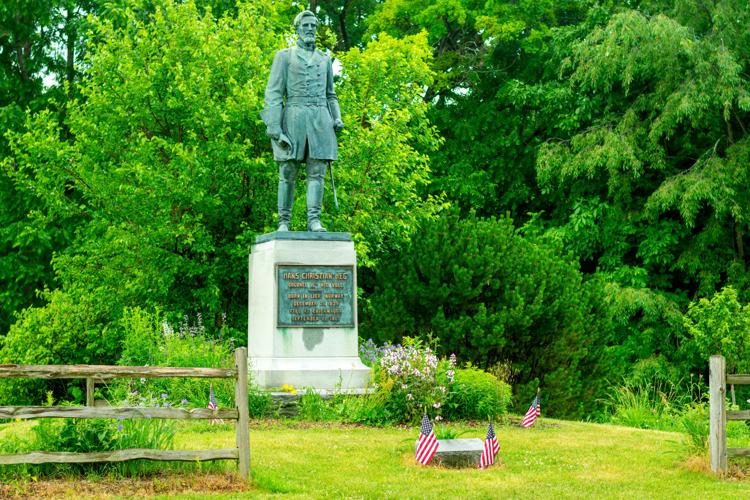 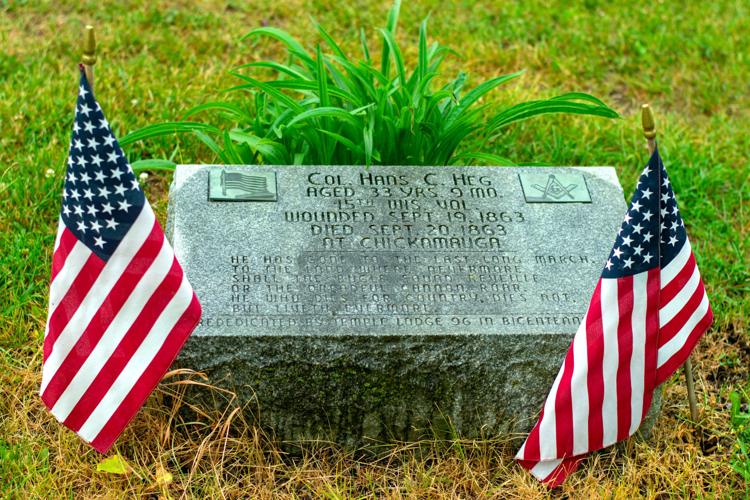 Col. Hans Heg is buried on Indian Hill in Muskego. 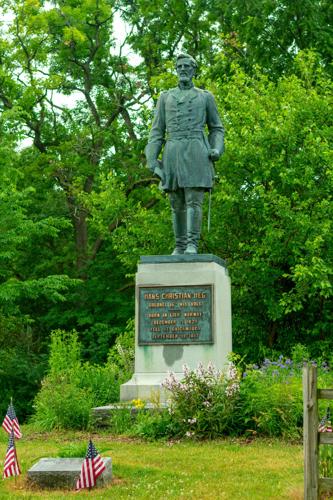 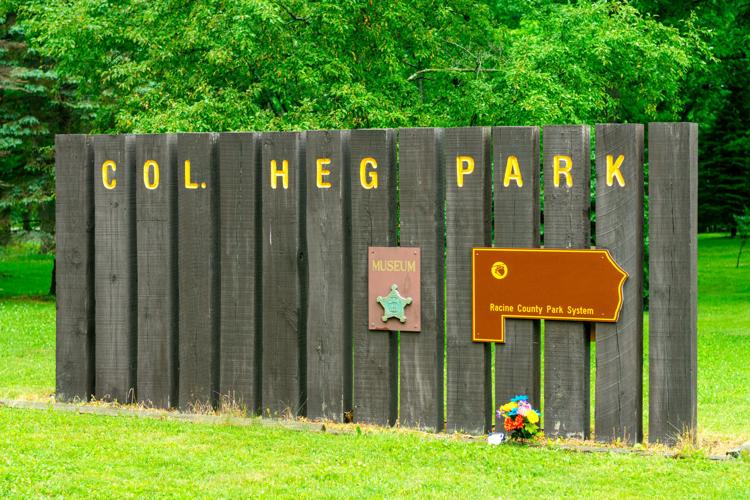 Heg Memorial Park is located in the Town of Norway in Racine County.

WIND LAKE — The statue of Col. Hans Christian Heg, torn down by rioters at the state Capitol on Tuesday night, honors a Norwegian immigrant who lived in Wisconsin and died fighting for the Union Army in the Civil War.

Heg was once a resident of Racine County.

The monument to Heg was unveiled on Capitol Square in October 1926. On Tuesday, a group of rioters tore it down, along with Wisconsin’s “Forward” statue.

Statues identical to the one on Capitol Square are located at Colonel Heg Memorial Park in the Town of Norway and also at the colonel’s birthplace in Lier, Norway.

“The State has sent no braver soldier, and no truer patriot to aid in this mighty struggle for national unity, than Hans Christian Heg,” the State Journal wrote Sept. 29, 1863, reporting the word of his death. “The valorous blood of the old Vikings ran in his veins, united with the gentler virtues of a Christian and a gentlemen.”

Heg was mortally wounded in the bloody Battle of Chickamauga on Sept. 19 of that year and died the next day. The highest-ranked Wisconsin officer killed in combat during the Civil War, Heg commanded a regiment largely composed of other Scandinavian immigrants. He was 33 years old.

His father came to Wisconsin in 1840, and became a resident of the Old Muskego settlement in Waukesha County. Hans Christian was the oldest son and lived on a farm. He attended school and quickly learned English.

At the age of 20, he went to California and spent two years in the gold mining industry amid the Gold Rush. Soon after his return, in 1851, he married and bought his father’s farm, in the Town of Norway. He lived there until 1859, when he moved to Waterford and engaged in mercantile business, and was also interested in a flouring mill, according to the State Journal.

Heg also served on the Norway Town Board and Racine County Board, according to historian Ella Stratton Colbo.

In 1859, he was elected to the statewide office of prison commissioner “earning a reputation as a pragmatic reformer,” according to the state Historical Society. Heg found an outlet for his anti-slavery views when he was tapped to lead his Union brigade.

He was one of the first members of the newly formed Republican Party and the first Norwegian-born candidate elected statewide in Wisconsin.

Re-nominated in 1861, he declined and set about the work of raising a regiment of his countrymen for the war. He soon gathered 1,000 Norsemen, and, on March 2, 1862, left the state. His regiment participated in the capture of Island No. 10 in Kentucky, and traveled to Tennessee and Mississippi as well. For nearly a year after, Col. Heg commanded a brigade.

His remains were buried on Norway Hill in Wind Lake, near the site of the first Norwegian-Lutheran church in America, Norway Lutheran Church.

“Wisconsin has such a rich Civil War history,” said Assembly Speaker Robin Vos, R-Rochester. “If it wasn’t for Heg, battles like Gettysburg may not have been won by the Union.”

When he drives by the statue at Colonel Heg Memorial Park, Vos said he appreciates the reminder of the people who came before and the sacrifices they made, giving up everything to fight for what they believed in. Vos was angry that the Christian Heg and the “Forward” statue were both torn down in Madison.

“If you believe in equality you certainly wouldn’t tear down a statue that represents a person who fought hard for equality when it was in fashion,” he said. “There is a lot of ignorance out there of what people are really fighting for.”

Being well-educated on history and not “ignorantly” destroying property will also set a good example for our children, he said.

He hopes the Wisconsin Department of Administration will work to get the statues back up and outside as soon as possible, as opposed to putting the statues in museums. This way, we can remember our history, he said.

He also hopes protesters can find other ways to persuade those in power peacefully and not try to “bully them into it.”

“They should be convincing them through the power of words and actions and not destruction and violence,” he said.

This story has been updated since publication.

June 26: The Journal Times pages from the past

June 26: The Journal Times pages from the past

Statue of Heg, once a Racine County leader, to be reinstalled in Madison by next summer

Col. Hans Christian Heg, a Wisconsin abolitionist who died in a Civil War battle and whose statue in Madison was destroyed this summer during unrest, lived on a farm in northwestern Racine County on a farm.

History books invariably talk about Thomas Jefferson’s contributions to the foundation of the U.S., but they often ignore the abuses of Black people he perpetrated, according to the proposal from the new community group: Black Employees Matter.

Col. Hans Heg is buried on Indian Hill in Muskego.

Heg Memorial Park is located in the Town of Norway in Racine County.